'Need to Leave the City, But Have to Return Soon': Scenes From a South Delhi Screening Centre

At Chattarpur, the grounds of a school now play host to unending lines of migrant workers who stand in the hot sun for a chance to go home. 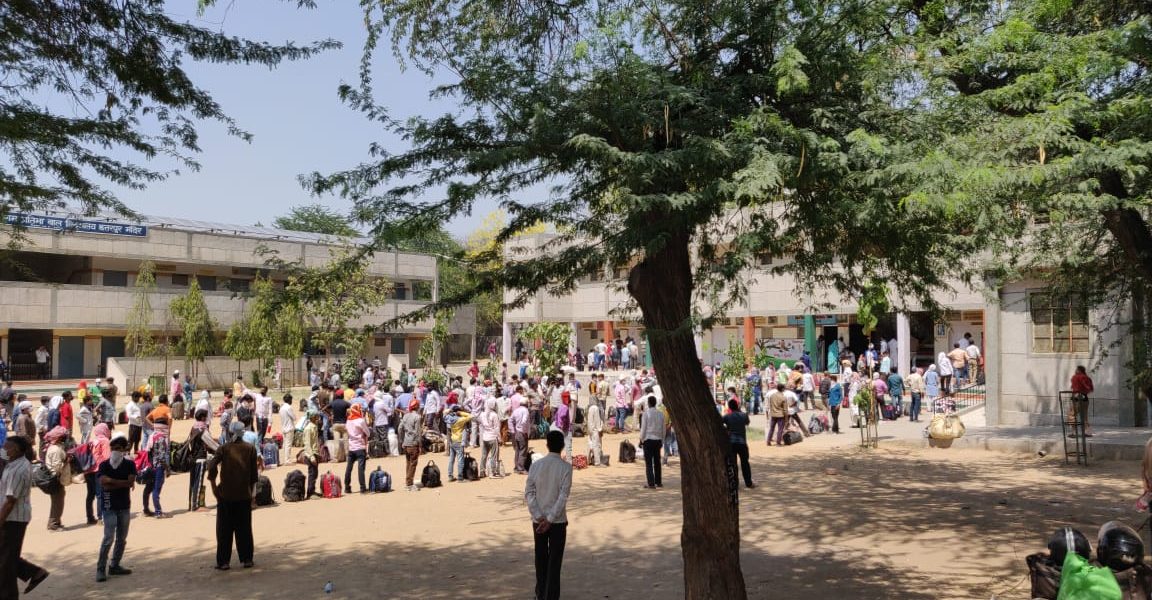 The municipal school at Chattarpur, which would have been filled with schoolchildren during the academic year, was now a screening centre for migrant workers for the special trains to their home states. Photo: The Wire

New Delhi: It is past two in the afternoon. As the afternoon sun blazes, they sit in the shade of the trees lining the perimeter of the dusty playground of the municipal school. Their bags – canvas backpacks, tattered suitcases and clothes stashed into plastic bags – snake around the large dust grounds, marking their place on the serpentine line to one of the counters at the screening centre.

“I just want to leave. I need to be home. I can’t stand it anymore,” says Mohammed Zubair, a middle-aged tailor. Standing under a tree, he explains that even the relaxation in the lockdown and possibility of getting some work was not enough incentive for him to stay back.

“Staying in the room, within those walls, all these days… It has been very disturbing”.

He remembers his factory supervisor telling him not to come to work on March 20. Since then, he has been home. “I asked my relatives to send me Rs 10,000 for my expenses. Now it has run out”.

The lack of notice before the lockdown period started, took him by surprise. Otherwise, he would have returned to Darbhanga. “Tell me, how many people had this disease (COVID-19) when the lockdown was announced? If we had been allowed to leave for home at that time, then the chances of us getting infected when travelling would have been so much less”.

Standing next to him, Mithilesh Singh, who has trekked all the way from Sadar Bazar in central Delhi, is not as critical of the government. “I think that what Modi ji did was required,” he says. But, he did have a demand. “If you can take my appeal to Modi ji, please ask him to arrange for more trains for us,” says the 25-year-old, wearing a black cotton mask. 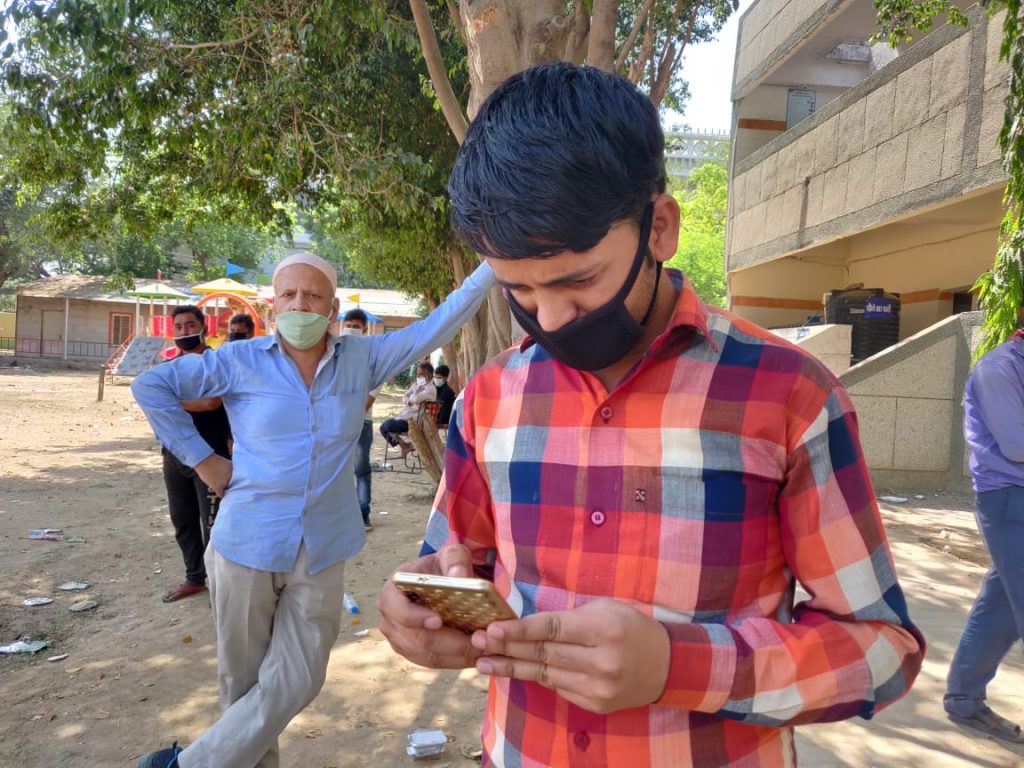 Mithilesh Singh, who was hoping to register his name. Photo: The Wire

The school ground in Chattarpur is one of several district screening centres dotting Delhi. These had been set up for migrant workers to assemble after registering online for a seat in the Shramik Special trains. While many of those had got a notification that their names had been approved, others had travelled to the centre without any registration details, hoping to strike it lucky.

Neither Zubair nor Singh had got any notification that they should go the screening centre, but decided to go nonetheless. “I know there may be more work now, but you have to understand that our families are very worried. They want to see our faces,” said Singh.

A Delhi government official, who did not want to be named, says there has been a sudden increase in the number of migrant workers coming to the centre in the last four days. “I have been posted here for the last 10 days. Earlier, there were 400-500 people, but now there are 1,500 to 2,000 people a day.”

He has a simple theory for this rush. “Each person who has reached Bihar by train must have called his friends in Delhi. News spreads like wildfire. Even a person living near ISBT (in north Delhi) is coming here to register”. 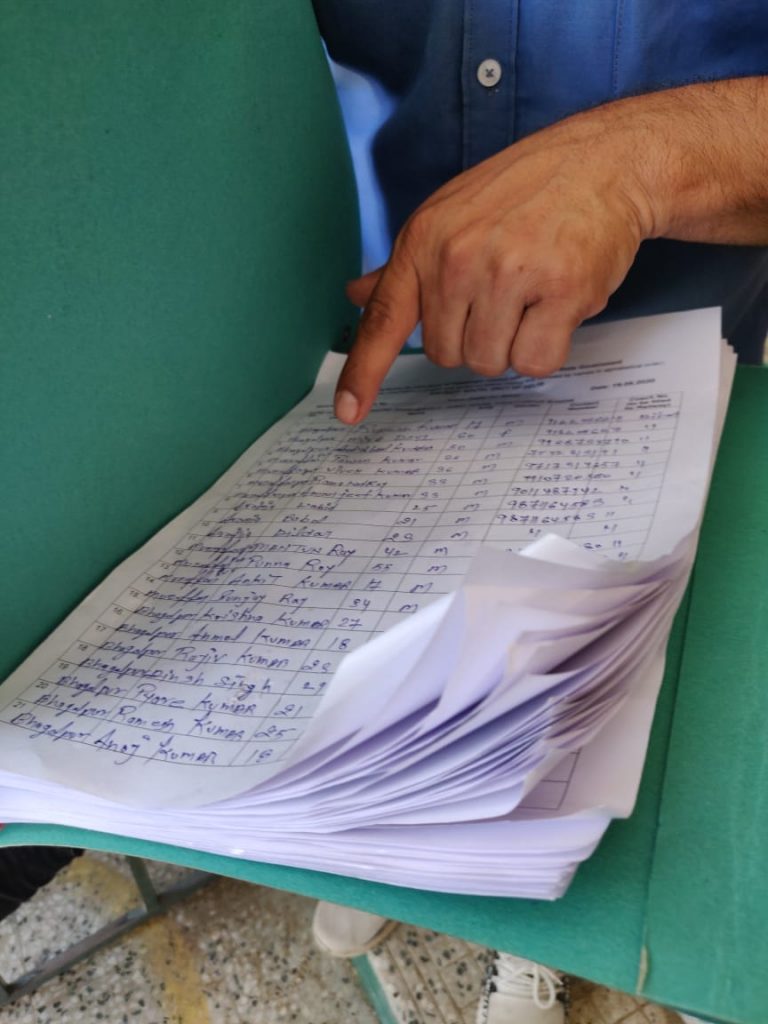 An official pointing to the list of migrant workers who have registered for the special trains. Photo: The Wire

Showing a green government file of lists, he explained that each person is being asked for the choice of their destination, currently limited to two cities, Bhagalpur and Muzaffarnagar in Bihar. “After making the lists, I go to the ADM office to find out when the train is leaving. Then, I come back here and call out the names for people to go in buses”.

It is only when the workers have to board the trains that they are screened for their body temperature.

By late afternoon on Wednesday, around 64 buses – each taking 21 persons – had been despatched to the railway station. A day earlier, 112 buses had left. Those who could not be sent in those stations were taken to the large hall inside Chattarpur temple.

Dealing with thousands of people every day, these government officials, sitting under the covered porch, just wear a mask for protection, with sanitisers and water bottles on each table.

Another Delhi government employee, who identifies himself only as Deepak, says that they were provided proper PPE, but they were too cumbersome to work in, for long hours. “Most of us don’t wear gloves. We have to continuously write down names with our hand. If I wear gloves, it becomes very sweaty and smudges the pages,” he says. 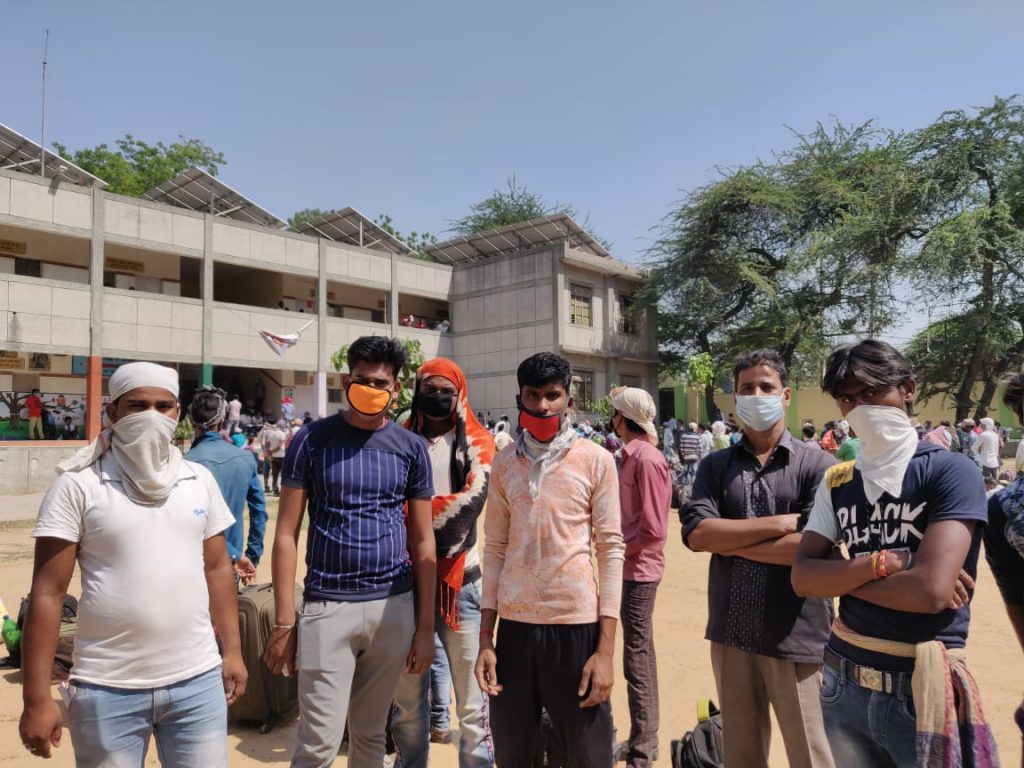 While they workers were determined to return home after having faced unemployment for last two months, the majority of them said that their economic future was in the cities, not in their hometowns. Photo: The Wire.

As he is speaking to this reporter, he looks at the lines from the steps into the playground. “Right now, there are fewer people, as we sent a big batch to the station. You should have seen the crowds yesterday…the queues went outside the compound into the road. It is not possible to do social distancing here. We tell them to stand apart. It lasts for less than a minute”.

A few metres away, Jaiprakash Kumar, holding a bag in one hand and a water heater box in another, stumbles a bit as he moves to take another step towards the front of the line. “I reached here at seven in the morning and only now I have reached the front of the line,” he says. He had packed some food for the journey.

Kumar, who is a IT hardware specialist, had been working through a vendor as technical support at the GST Council. He also wants to go home to Aurangabad, even though the lockdown could end soon. “I am the only son in the family. They have been constantly worried and calling me. I told my boss that I need to go home”.

However, he does plan to return. “I don’t know when, though.”

Just like Kumar, other migrant workers who have borne the brunt of a stalled economy during the weeks of lockdown, also have plans to return to Delhi. “Most of us took on debts to survive during this period. When the money for daily expenses ran out, I went to the food distribution centre. There, we stood in line for six hours to get one meal… This is not the way to live,” says Naseeruddin, who hails from Araria district. 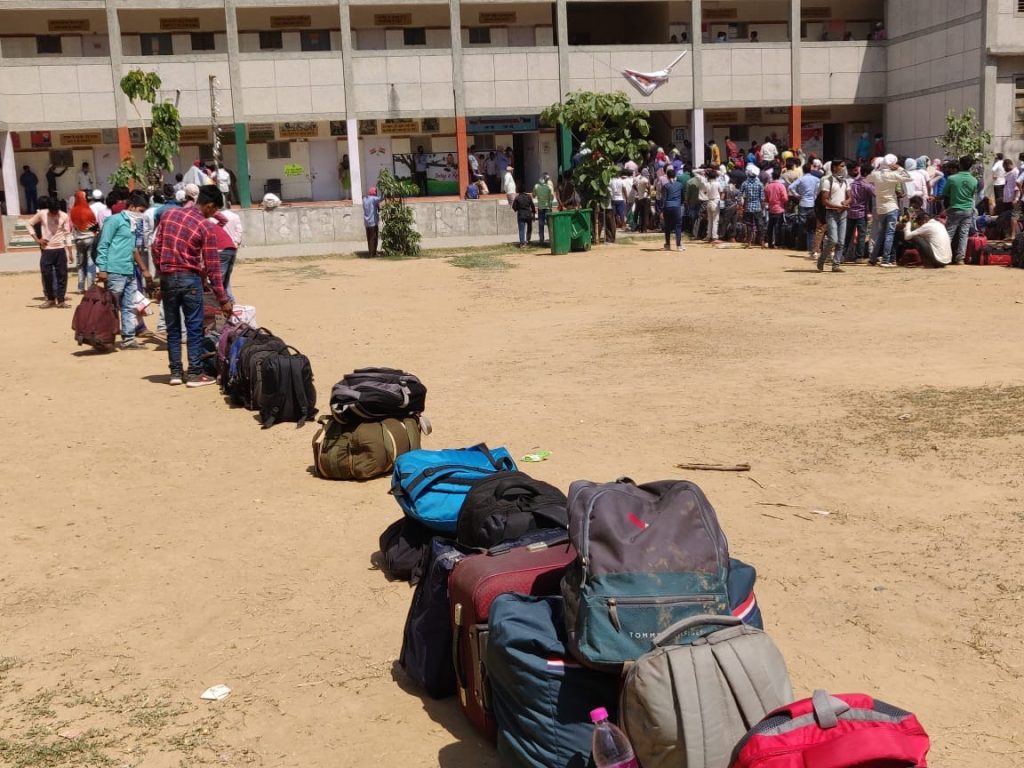 With temperature rising beyond 40 degrees and the wait stretching for over six hours, most of them had put their bags to mark their place in the queue as they awaited their turn from the shaded sidelines. Photo: The Wire

However, he can’t see a future in his hometown. “What will I do when I go there? Maybe try to set up a small business. But, there is no money there… I will have to come back to this city”.

Eighteen-year-old Jaihind Kumar had two immediate priorities – first, that he would not leave the centre without ensuring a seat on a train and secondly, that he will return to Delhi. “I have already given the room key to the landlord, so I will stand in line as long as it takes,” says Kumar, who wore a handkerchief as a mask. “I know the big people are worried that most of us will not come back. It will take a few months, but when the stomach growls, then the city is the only place for us”.

Near the gate, a group of women had arrived with a large white bag. When they spotted a child, they handed over a bag of chocolates and packaged snacks. But, only after they had taken a photo on their phone. “We are from DCCPR, so we have to do this to show in the office”.

The loudspeaker system suddenly crackled – and the workers rushed to their bags on the line, hoping that it was a call that the buses were ready.

But it was false alarm.

A disembodied voice boomed: “If you can hear me, raise your hands. Please don’t register twice in the forms. It won’t increase your chances. We will just cancel your name”.

The workers standing in their line, raised their hands dutifully – and then went back to wait under the shade of the trees.