Workers, climate activists, and citizens are uniting on November 25 to turn Black Friday into Make Amazon Pay Day to stop the company's squeeze on workers. 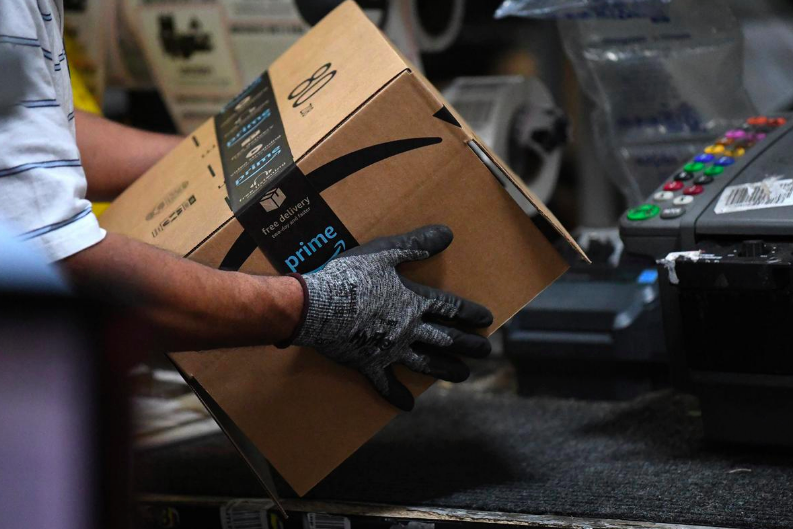 Representative image of a worker handling an Amazon package in the US. Photo: Reuters

In India, Amazon is incredibly attractive. It promises to bring to your doorstep anything from around the world within 48 hours — all for a Prime membership of just Rs 1,499.

Consumers get superfast delivery, Amazon gets superprofits. It is workers that pay the price.

Consider the pandemic – as local stores shut down and people’s mobility was restricted by lockdowns, Amazon’s e-commerce empire ballooned. The corporation doubled its workforce, tripled its profits, and deepened its role in economies across Western Europe, the US and India. During these lockdowns, Amazon became the place where everyone bought everything. But workers were underpaid, overworked, and intrusively monitored – without masks or protective equipment to ensure their safety.

This week, they are gearing up to stop the squeeze – and demand an end to Amazon’s impunity. As prices of food, fuel, and basic necessities soar through the roof – and wages, in contrast, continue to fall – workers, climate activists, and citizens are uniting on November 25 to turn Black Friday into Make Amazon Pay Day.

This demand comes from Amazon’s own workers. amAmazon workers are closely monitored, with unreasonable targets that result in a dock of pay when unfulfilled. Injury rates at Amazon are twice as high as the industry standard, with workers complaining about lack of masks and protective equipment during the height of the COVID-19 crisis. Rest is made impossible with lunch breaks shorter than 30 minutes, lack of seating arrangements for those working on their feet all day long, and absence of proper bathroom facilities.

Amazon is squeezing its workers, communities, and the planet – yet there is no system to keep it in check. When workers raise their voices, they are swiftly punished. When an operations manager in Hyderabad complained about the company’s labour laws and overtime working hours, he was promptly sacked, and the company denied all allegations. In many countries, Amazon, in fact, collects data about its employees to identify those who display a ‘pro-union’ sentiment. In the United States, it has now been documented, it attempted to ban words like “Union,” “Restrooms,” “Pay Raise,” and “Grievance” from its new worker chat app after disturbing news reports of workers forced to urinate in bottles as a result of oppressive deadlines.

Not only does Amazon exploit its workers, it turns them against each other. Amazon has developed an extensive range of applications that use computer vision – and trained workers in India and Costa Rica to monitor their counterparts in warehouses around the world. But those doing the monitoring are themselves also monitored. Managers track how workers review videos with real-time analytics and hold them to incredibly high accuracy metrics, resulting in one former employee remarking, as noted in the investigative report, “[w]e were not allowed to make mistakes…I’m human, I’m not a robot.”

Solidarity across borders is crucial. Consider the fact that Amazon’s brands produce a majority of their goods in factories located in the Global South – many of which are in our region. Workers in these factories typically work in dire conditions, in Chinese factories producing Amazon devices like Echo and Alexa, or in unsafe garment factories in Bangladesh producing fast fashion.

Amazon’s exploitative practices extend well beyond its warehouses – from manufacturers and traders that supply to the corporation, logistics providers that move goods across its empire, to consumers that fill its coffers. Brick-and-mortar retailers in India have long raised serious concerns about unfair practices employed by Amazon that stifle competition and kill local businesses. Last year, an investigation of internal Amazon documents by Reuters revealed it ran a “systematic campaign of creating knockoff goods and manipulating search results” to boost its own product lines in India. Internal documents also revealed a sophisticated strategy to escape Indian regulators, showing how Amazon adjusts its corporate structures to dodge restrictions imposed by the government to protect small traders.

To make the exploitative machine halt, we must strike all together, everywhere, all at once.

A planetary coalition convened by UNI Global Union and Progressive International is doing just that — trade unions, social movements, climate activists, tax watchdogs and civil society organizations are mobilising in a global day of action to Amazon hold accountable and take back control.

In India, the campaign will take to the streets in over 20 cities with critical demands, including, minimum pay of Rs 25,000 per month, a reduction of working hours from 10 to 8, a review of the intense surveillance policy, decent breaks, adequate male and female restrooms, equal pay for equal work, and compliance with Indian labour laws.

This Black Friday, in India and across the world, workers, civil society and regular citizens will stand together in solidarity to #MakeAmazonPay.

When Jeff Bezos founded Amazon in 1994, he did not just open an online store. He created a predatory business model ready to squeeze every last drop from workers, traders, consumers, communities, and the planet. Its digital tentacles reach into our homes, via data from Alexa users and website shoppers. To stop its spread and stop its squeeze will need every one of us to say enough is enough — and join the movement to Make Amazon Pay.

Rajendra Acharya is the regional secretary for Asia & Pacific at UNI Global Union which represents more than 20 million workers in 150 countries. Parminder Jeet Singh is the executive director at IT for Change, an NGO based in Bengaluru, India.