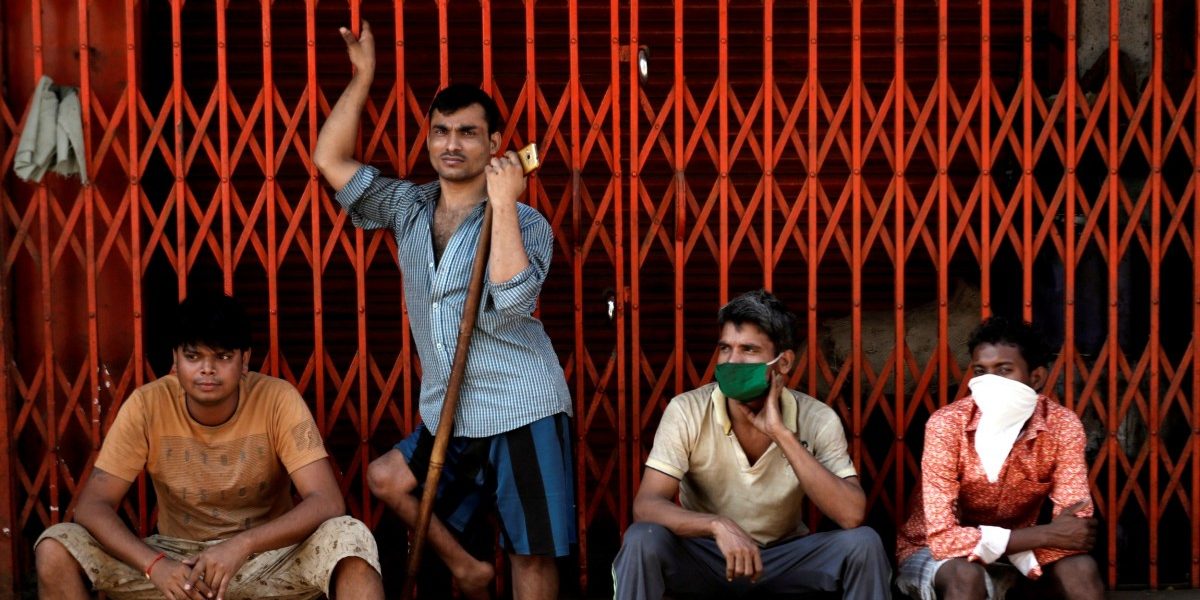 Migrant workers, who work in textile looms, are seen outside a loom after it was shut due to the 21-day nationwide lockdown to slow the spread of the coronavirus disease, in Bhiwandi on the outskirts of Mumbai, India, April 1, 2020. Photo: Reuters/Francis Mascarenhas/Files

New Delhi: Only 20% of the number of people who were provided work in April 2019 were employed in April 2020 under the Mahatma Gandhi National Rural Employment Guarantee Act (MGNREGA), according to official government data.

In the month of April 2020, 34 lakh households were provided work as compared to 1.7 crore in April of 2019, a decline of 86%. In fact, this figure is the lowest for at least the last seven Aprils since 2013 (data for previous years is not available online). It is also the lowest for any month in at least seven years.

A majority of states – 19 out of 34 – provided work to less than 10,000 households. Some states like Telangana did not record any work at all. Even large states like Uttar Pradesh and Maharashtra provided employment to only 74,000 and 54,000 households respectively.

The decline in work provided through MGNREGA is huge even when compared to March 2020, in the end of which month the lockdown was imposed. More than four times the number of households – 1.57 crore – were provided work in March, compared to 34 lakhs in April.

The crash in employment provided through MGNREGA – which is referred to as ‘employer of last resort’ by some – came at a time when unemployment rose to staggering levels. According to the Centre for Monitoring Indian Economy (CMIE), rural unemployment rose from 8.49% in the end of March to 22.67% on April 29.

The decline in work provided through MGNREGA does not come as a surprise. When the lockdown was announced on March 24 by Prime Minister Narendra Modi, there was no clarity on whether MGNREGA activity will be allowed. Most states did not allow MGNREGA works. The government clarified only on April 15 that MGNREGA work can be allowed with effect from April 20.

It does, however, raise the question on the Centre’s thinking behind announcing a ‘wage hike’ of Rs 20 as part of its Pradhan Mantri Garib Kalyan package announced on March 26. Finance minister Nirmala Sitharaman said that the wage increase will benefit 5 crore families.

So far, as the April data show, only 6.8% of the five crore households have benefited. And as Jean Drèze pointed out writing for The Wire, wages in several states were already higher than the wage increase announced by Sitharaman.

Also read: Has the Finance Minister Pulled a Fast One on MNREGA Workers?

According to economist Reetika Khera, who is professor at IIM Ahmedabad, the decline comes at a time when employment under MGNREGA typically begins to peak. “Agricultural work is low between April and July. The harvest comes to an end and work dries up. So, people turn to MGNREGA,” she told The Wire.

Khera added that as unemployment has grown since the lockdown was imposed, the demand would actually have been higher than in previous months.

She argues that lack of clarity on MGNREGA works being allowed was a factor in the dramatic reduction. “Clarity on work being open came only from April 21. Also, people are worried about going to work. They want to protect themselves as much as we want to protect ourselves,” Khera said.

According to Rajendran Narayanan, assistant professor at Azim Premji university, the almost 14 crore job card holding households under MGNREGA should be paid wages for the month of April.

Khera agrees. “For the month of April where we can see clearly that labourers lost employment opportunities, the government should compensate NREGA workers,” she said. If 14 crore job card holders are paid 10 days of wages for April, it will cost Rs 28,000 crore, a little more than the outlay for the central vista scheme.

He contends that the budget for MGNREGA needs to increase substantially from the Rs 61,500 crore currently budgeted for 2020-21. “I would say the budget needs to be expanded 3 to 4 times. A large part of the allocation – about Rs 10,000 crores – actually will go in settling carry over dues. Then we would be left with only Rs 50,000 crore. That is likely to be spent within six months,” Narayanan said.

Khera also suggests that now instead of following a tedious ‘technocratic’ registration process, the government should ease the process of providing work. “They have to stop asking to people to demand work. Anyone who shows up for work, should be provided work That will make a big difference,” she said.

The system of payment should revert to cash as the usage of digital payment systems in rural India is not particularly high, she added. “Also, how will people withdraw cash? So, people should be provided cash at the work site.”

Khera also recommends that part payment should be made in the form of food transfers. “Something like food for work where for every day’s work you get, say, 5 kilogram of grain and the rest in cash,” she said.

This would address, to an extent, the problem of food security and also help the government clear the excess stock of food grain that it currently holds. The Food Corporation of India as of March held a record 77 million tonnes of food grain, more than three times the buffer stock norm.

A difficult question of how to ensure that MGNREGA works are safe in the face of COVID-19 remains, and there are no easy answers. “This is a difficult question. Perhaps test more? And those who test negative can work. Maybe think of smaller work sites where physical distancing is possible,” Khera said.