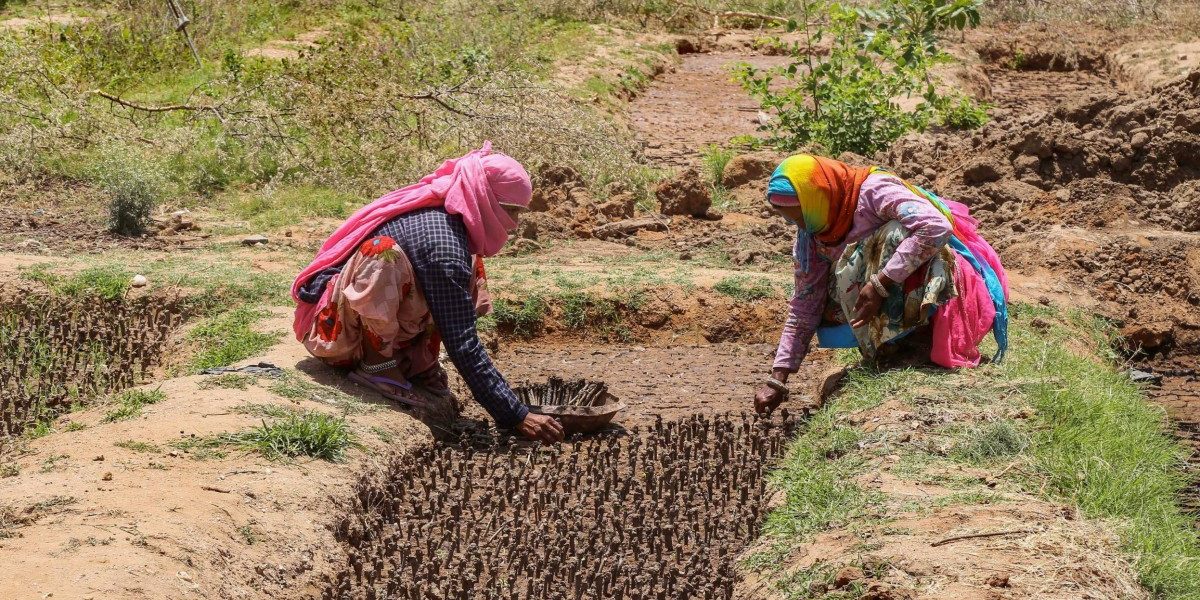 A school bus driver is struggling to make ends meet driving a tempo for hire, purchased with an informal loan; a five-star chef is volunteering for an NGO preparing cooked meals for distribution in the slums of Bangalore; and an MCA degree-holder is working as a door-to-door water purifier technician. These and many more such anecdotes give us a glimpse into the disruption that COVID-19 has caused in India’s labour markets.

The first wave and its associated containment measures caused large-scale job losses, a sharp rise in inequality and poverty, and an increase in indebtedness and hunger. For particularly vulnerable groups such as migrant workers and the homeless, it was nothing short of a humanitarian disaster.

Our report, State of Working India 2021 – One year of Covid-19, documents the experience of households and workers in the last year, beginning with the aftermath of the national lockdown of 2020. The lockdown increased inequality dramatically because incomes were wiped out almost completely at the bottom of the distribution. As per data from the Centre for Monitoring the Indian Economy (CMIE), an average four-member household at the bottom of the income distribution lost Rs 15,700 (just over two months of income). Several independent surveys also reveal sharp drops in income ranging from 40% to over 80% for informal sector workers, not only during the lockdown but even in the subsequent months.

Households coped by selling assets or borrowing with debts incurred ranging from two to six times households’ earnings. For instance, the Covid-19 Livelihoods Survey of vulnerable households, conducted by Azim Premji University, found that the poorest households (bottom 25%) had debt burdens nearly four times their monthly household income. This ratio was only 1.4 for the more well-to-do households. This increased indebtedness suggests an exacerbation of inequalities that could persist into the future. Rising fuel and food prices in recent months will only worsen household budgets, particularly for the poor.

As per CMIE data, employment had returned almost to pre-pandemic levels by the end of 2020, but incomes remained significantly depressed and around 15 million workers still remained out of work (Figure 1). Thus when the second wave hit, households had not fully recovered from the shock of the first wave. As the worst of the health impacts of the second wave recede, the question of livelihoods remains urgent. As of now there is a lack of data on the impact of the second wave on household incomes. But whatever information we do have, suggests that the state-level lockdowns and curfews would have resulted in significant loss of incomes. [Footnote]For more information on trends in employment rates (for men and women) and income levels (rural, urban, overall) over the last year using CMIE data, see here.[/footnote] Figure 1: Employment rates had recovered prior to the second wave but incomes had not.

For example, we can use Google Mobility data to estimate the impact of second wave lockdowns. These data capture the change in footfalls in outdoor areas (such as shops, parks, transit and workplaces) relative to a baseline period in January-February 2020. Putting this together with household income data from CMIE, we have estimated that, during the first wave, a drop in mobility of 10% was associated with a fall in incomes of 7.5%. This relationship can be used to infer the likely impact of the second wave.

Mobility had almost recovered to pre-pandemic levels by March 2021 (7% below baseline). When the second wave hit and renewed restrictions were put in place, mobility dropped sharply in April (by 22%) and then even more steeply in May (by 46%). For comparison the fall in May 2020 was 51% (Figure 2). If we assume a similar relationship between mobility and incomes as seen during the first wave, this suggests that in May 2021 incomes would have fallen almost as steeply as they did during the nationwide lockdown last year. Figure 2: Changes in mobility during the first and second waves.

But thus far the second wave policy response has remained limited to an extension of food relief (under the PM Garib Kalyan Anna Yojana) and some credit-based support measures. The above numbers indicate that much more needs to be done.

Designing effective policy support measures also requires us to understand why household incomes fell. This loss of income may come from two sources – a loss of employment leading to zero earnings, or a decline in wage rates. As mentioned earlier, employment rates returned almost to pre-pandemic levels by the end of 2020, but earnings remained suppressed. We find that 90% of the decline in aggregate incomes of workers was due to a reduction in their earnings and only 13% was due to the loss of employment. So, even as most workers were back in employment over the course of twelve months, for many this was accompanied by a reduction in earnings. Figure 3: Loss of income may have come from job loss or a reduction in wages or earnings.

Take the case of the self-employed. Subdued demand, supply constraints and lockdown restrictions have resulted in compromised earnings for businesses, traders and farmers across the country. For daily wage workers too, the predominant source of loss of earnings came from a fall in wage rates. Since this kind of work is characterised as much by ease of entry as it is by ease of exit, it has been relatively easy for such workers to return to employment. But, this does not mean they found work that paid just as well as before the pandemic. For salaried workers though, the experience was drastically different. The loss of income arose largely from individuals losing their jobs altogether, rather than facing a reduction in salaries.

The pandemic disproportionately impacted women and young workers. Forty-seven percent of working women lost their jobs during the lockdown and did not return to work even till December. Compare this to only 7% of men who experienced a permanent job loss. Despite this, in the months after the lockdown, women’s workforce participation rate (WPR) was nearly restored because the exodus of women was countered by the entry of women previously out of the workforce into employment.

Also read: A Year Into the Pandemic, the Statistical Vacuum on Indian Labour Hasn’t Been Filled

However, women’s entry into the labour market during these times has been characterised by increased precarity and lower earnings compared to men. Most women entered as casual wage workers (43%) whereas most men entered into self-employment (54%). Given the self-employed, even during the pandemic, earned nearly double what a casual wage worker earns, this indicates an additional disproportionate impact on women vis-a-vis men.

In the first few months of this year, CMIE data indicate that women’s WPR steadily improved. By March 2021, it was at 90% of the pre-pandemic level. However, by April, as the second wave hit and regional lockdowns were announced, it took an immediate hit, falling by nearly 2 percentage points (from already low levels) to 70% of its pre-pandemic level. For men, on other hand, the decline was negligible. It is evident that even these scaled-down regional lockdowns that allow economic activity to continue to some extent, significantly disfavour women. Mobility restrictions, including the lack of public transportation, have huge implications for women’s work. While men are available to navigate the labour market more easily, in a very literal sense. Further, women’s higher engagement in ‘touch’ industries which remained largely non-functional during the limited lockdowns also made them all the more vulnerable to job loss.

Besides women, young workers form another group that were disproportionately affected. For 33% of young workers between the ages of 15 to 24 years, job loss during the lockdown meant unemployment for the rest of the year. Only 9% of 45+ and 6 % of 35-44 year olds had a similar experience. Young workers will now have to compete with two new cohorts of youngsters entering the workforce in the last year and this year. Youth unemployment rates have been a matter of concern pre-pandemic with 44% of 15-24 year olds reporting unemployment. Not surprisingly, by the end of 2020, this had increased to 54%. That half of India’s young potential workers are unemployed indicates tremendous scarring effects including the loss of on-the-job learning for this group.

A comprehensive policy response is needed to compensate vulnerable households for earnings losses, bring back women into employment and help younger workers enter the job market. The wage subsidies routed through the EPF announced under Atmanirbhar Bharat Rozgar Yojana are a welcome move to promote hiring of salaried workers. For daily wage workers and low-income self employed, an assurance of alternative employment sources can provide much needed relief. MGNREGA has an important role to play here. The programme budget needs to be expanded urgently to meet the demand for work as well as to extend the number of guaranteed days. In urban areas as well, an employment guarantee scheme (or at least expanded public works) can play a key role in providing a minimum level of earnings while also developing public infrastructure. Not to forget, any such initiative can have multiplier impacts in local economies by increasing demand.

Covid-relief policy also needs to facilitate women’s reentry into work on an urgent basis. It is not unreasonable to conjecture that variations of lockdowns and mobility restrictions are going to be part of the ‘daily’ life for many months to come. Any return to work for women is severely constrained by the limited transportation options. Where industries are opening up and work resuming, there must be a concerted effort in coordination with public agencies and enterprises to develop transport options specially for women. Aside from this it is crucial to address the gendered access to vaccinations that we are witnessing – as of June 25, for every 1,000 vaccinated men, there were only 856 vaccinated women.

In summary, a comprehensive COVID-19 relief and recovery programme needs to be developed. Such a programme could consist of food and cash relief as well as workfare (such as employment guarantee) in addition to wage subsidies (possibly targeted towards women workers), special training programmes and subsidised apprenticeships for younger workers, and large investments in local infrastructure that can enable women workers to enter the labour market. This will enable the Indian economy to emerge quickly and strongly from this once-in-a-century crisis.