Forty-year-old Rajesh was one of the 26 migrants from his Uttar Pradesh village who worked in Ankleshwar. 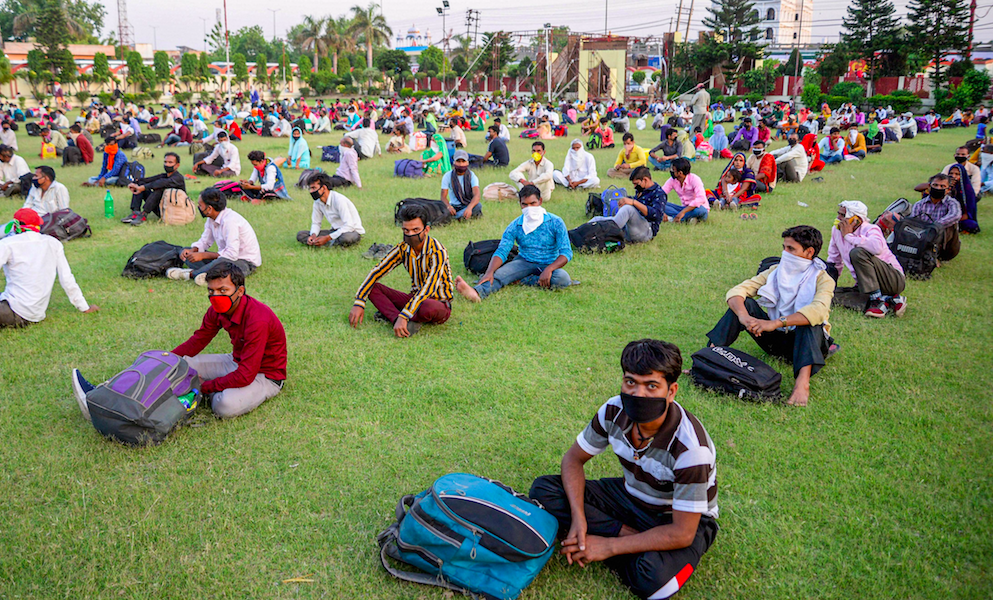 Stranded passengers maintain social distance as they wait to leave for Banaras in special trains during the nationwide lockdown in wake of the coronavirus pandemic, in Jalandhar, Tuesday, May 5, 2020. Photo: PTI

New Delhi: Reports of migrant workers and their family members taking ill or dying while trying to reach home have populated news since the beginning of the lockdown, announced by prime minister Narendra Modi with a four-hour notice on March 24.

The latest addition to this list is 40-year-old Rajesh Sahani, who was cycling home to Kushinagar in Uttar Pradesh from Ankleshwar in Gujarat and died on the way.

Rajesh’s body was found at around 6.30 pm on May 4 by a passerby on National Highway 8. Rajesh had attempted to cycle the 1,500 km distance from Ankleshwar, where he residing in the staff quarters of a power plant, to his native Bahuas village in Kushinagar.

The doctors, who examined his body at the Karjan General Hospital in Gujarat, stated that he “died of exhaustion”. The hospital superintendent was quoted in reports as having said, “…as per preliminary reports of autopsy, he died due to exhaustion. He did not have any other co-morbidities and was healthy. He also did not have any symptoms of COVID-19…”

But for Rajesh’s family, the reason of his death was different. “Exhaustion did not kill him, his helplessness to meet his family in such times of crisis did. We could not even see him one last time,” his wife, Indravati, was quoted by The Indian Express as having said over phone.

The family got the news of Sahani’s death through his elder brother, Raju, who also stayed at the same Ankleshwar power plant.

In fact, Rajesh had met Raju on the morning of the fateful day before leaving for work. Raju was supposed to go to work in the following shift.

It was during the day, that Sahani decided to set off for his native village. When Indravati called him over the phone, he did not answer her call. She then called up Raju to enquire where her husband was. When Raju called the police, he came to know that Rajesh had died.

Rajesh was one of the 26 migrants from his village who worked in Ankleshwar. He had come to Ankleshwar in February this year, a month after Raju did. While their father was a rickshaw-puller, they both worked as farm labourers back home.

“He never shared any plans about cycling back home. We decided to stay back as work resumed and we were promised wages too. I do not know why he left without informing anyone,” Raju said.