'Hunger Can Kill Us Before the Virus': Migrant Workers on the March During Lockdown

Facing starvation and because of unavailability of work, many daily wage labourers have set out on foot to walk to their homes, hundreds of kilometres away. 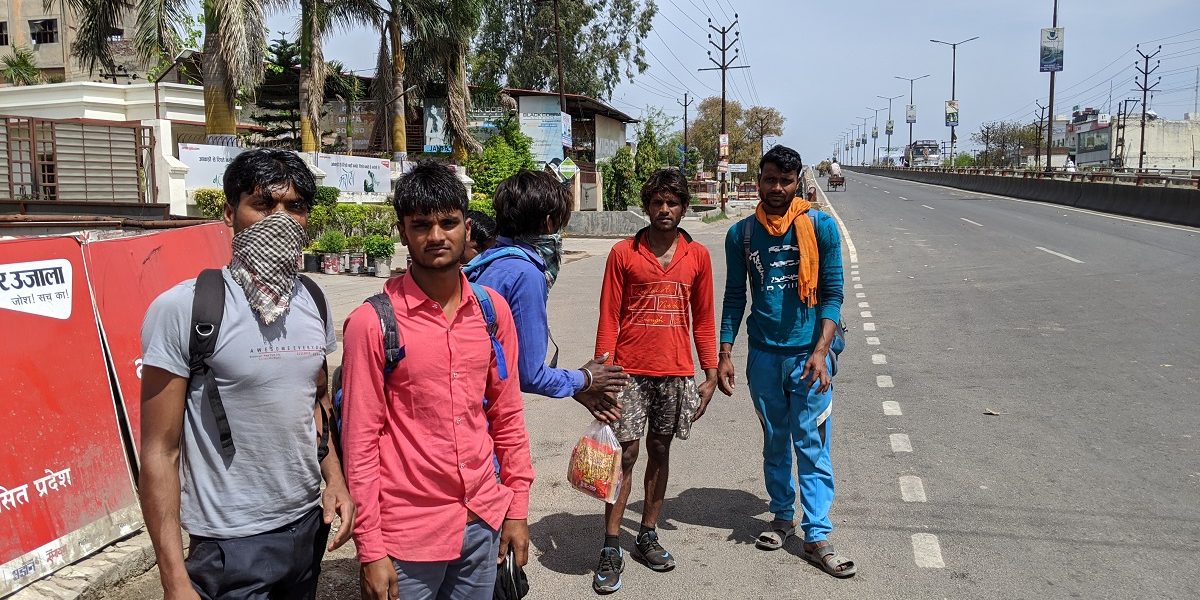 Meerut: Keshav Kumar last ate around 16 hours ago. “A kind man in Noida gave us some roti and sabzi,” he says. And then he left around midnight on Wednesday, along with fifteen others, to make the 150-kilometre journey back home, on foot, since all forms of transportation in the country have come to a halt.

“We are going to our homes in Bhojpur. There was no other way except to walk,” he said while sitting under a tree in Meerut’s deserted bus stand at around noon on Thursday. They walked around 60 kilometres through the night and have another 90 to go before they get home. Bhojpur is a small village in Bijnor district of western Uttar Pradesh.

The group worked as daily wage construction labourers in Mamura in Noida, earning Rs 400 a day. All work stopped on March 22 with the ‘janata curfew’ announced by Prime Minister Narendra Modi, followed by Uttar Pradesh chief minister Adityanath’s announcement of a ‘lockdown’ in 16 districts, including Noida. 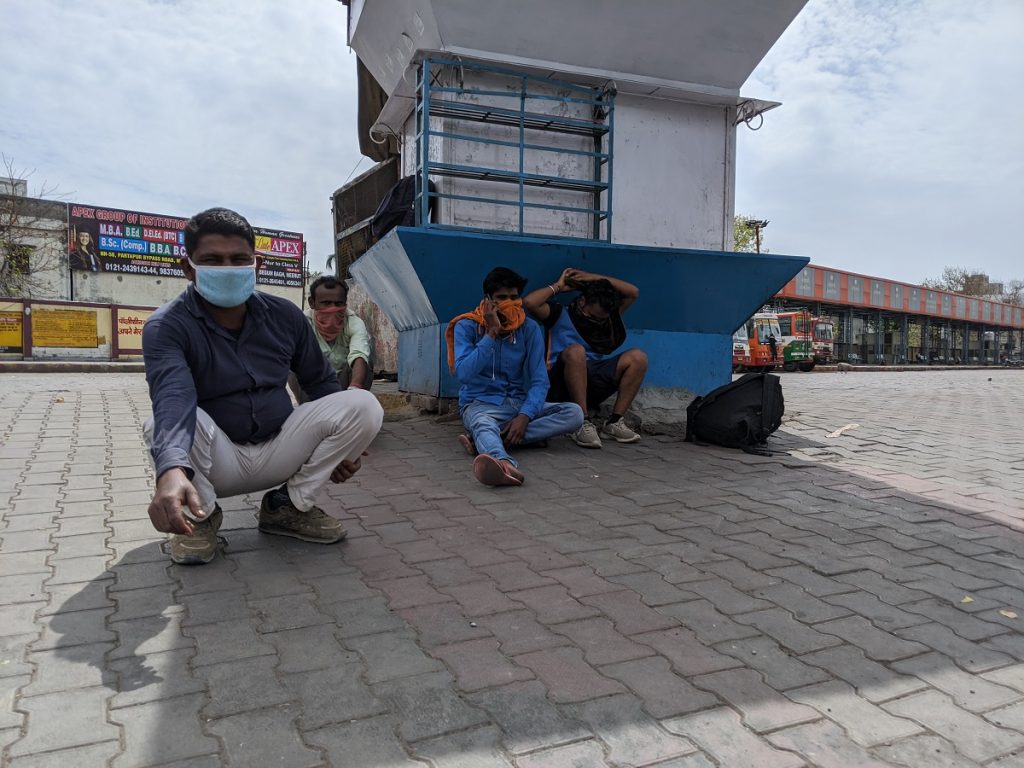 At that time, though, the group had not thought of returning home. “We were told that things will be back to normal on March 31. But, when Modi announced that everything will shut down for three weeks, our contractor told us there will be no work,” said Vipin Kumar, also from Bhojpur.

No work meant no wage and no wage meant no food. “There would have been no way for us to survive,” Vipin said. The group had only begun its latest assignment at a construction site in Noida’s Mamura on March 16.

“Whatever money we had earnt in that week, we spent on food after March 22. Now we only have Rs 500 between the fifteen of us,” said Vipin. “We had two options – to either stay in Noida and starve, or try and walk back home.”

With their belongings in stuffed in backpacks, they decided to walk home, as several migrant workers have in the past few days.

An estimated 12 crore of India’s 46.5 crore workforce are migrant workers. Lakhs of them are now on the move on foot to reach their homes. They carry the risk of spreading COVID-19, the disease caused by the new coronavirus, to rural India, in addition to the risk of contracting the disease themselves. They also run the risk of going hungry.

Later in the afternoon, The Wire met another group of five migrant workers close to Mohiuddinpur near Meerut who are walking the 170 kilometres from Noida to their homes in Najibabad. 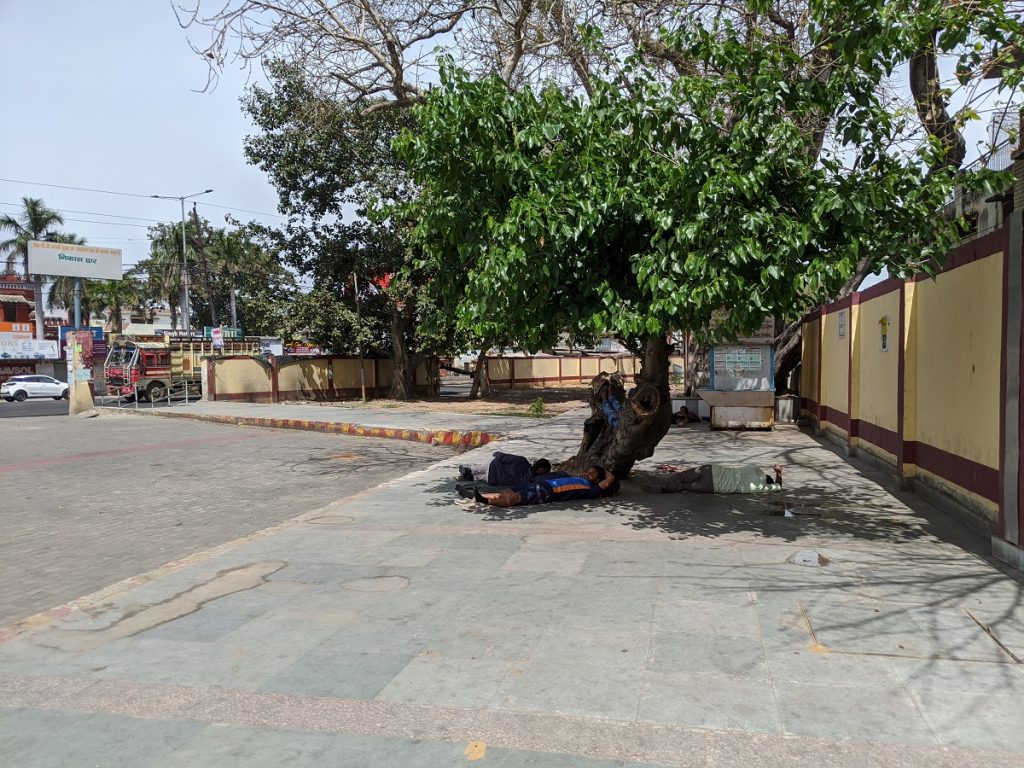 “Where will we get some food?” asked Bhole Kumar, who also began walking on Wednesday night. He worked as a mason at a construction site, earning Rs 500 a day.

There is no cooked food around. The food stalls which would have otherwise lined this area are all shut due to the lockdown.

“Corona se pehle bhook mar degi (Hunger will kill us before the coronavirus),” he said. A little further down the highway, the group is able to find a fruit seller and buys some fruits. “We only have Rs 300 left now. This has to last us the journey,” he said, after he swallowed a banana in one bite.

Around the same time, finance minister Nirmala Sitharaman had just begun announcing the financial aid package aimed at addressing the devastation of the livelihoods of the poor. But Bhole did not have any great expectations of the government.

“What are they going to do? What have they ever done for the poor?” he asked.

“Hawai jahanzon se bimari ayi hai. Hum to laye nahi. Par sadak pe bhooke hum ghoom rahe hain (The disease has come via aeroplanes. We have not brought it. But it is we who are roaming the roads hungry),” Bhole said.

While the Centre has not announced any substantial financial aid for daily wage earners, the Uttar Pradesh government has said that it will transfer Rs 1,000 to 20.37 lakh construction workers who are registered with the labour department.

In this group, only Bhole is eligible for the transfer. The others are not registered with the labour department. “And what is Rs 1,000 anyway? I have lost wages of ten days as the contractor did not pay me and I had to leave because I had nothing to eat,” Bhole said. 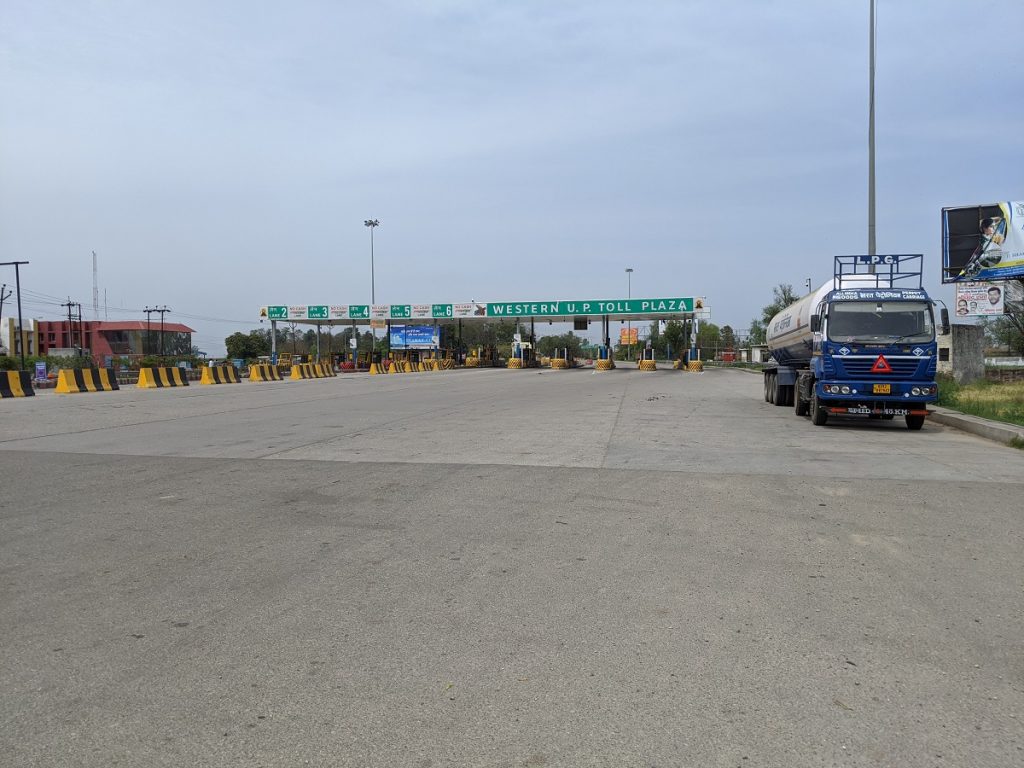 Another group of workers was walking near Sakoti, about 30 kilometres from Meerut, on the Delhi – Dehradun highway. They are headed to their village Sisona near Muzzafarnagar and began their journey on Wednesday night in Ghaziabad, about 100 kilometres away.

They request that they not be identified. “We are Muslims and don’t want to get into any trouble,” one of them said. They too worked as daily wage earners at construction sites, earning between Rs 300 and Rs 400 a day.

By the time The Wire spoke to them, Sitharaman had finished announcing the financial aid package, including an increase of Rs 20 per day in the daily wage provided under the Mahatma Gandhi National Rural Employment Guarantee Act. “But when everything has shut down, what work will there be under MGNREGA?” asked one of the workers.

Also Read: Sitharaman’s Coronavirus Package for the Poor May Not Bring Immediate Relief

Most people who have been stranded or are walking hundreds of kilometres to their homes are relying on good samaritans for food and water. The government has not established any community kitchens or shelters for the migrant workers who are on the move or are stranded.

At the bus stand in Meerut, two youngsters, Gaurav (22) and Vishnu (16), lay sleeping on the floor in the late afternoon.

Gaurav worked as a driver for a private bus plying between Ghaziabad and Meerut and earned Rs 600 a day. Vishnu worked as the cleaner on the bus, earning Rs 300 a day.

Since March 22, both have been out of work, out of food and stranded at the bus stop. “Last night, a policeman gave us some poori and sabzi. But we haven’t eaten anything since,” said Gaurav.

They are from Bulandshahar, about 70 kilometres away. “I have been thinking about walking back. But I am worried about him [Vishnu] because he is young and may not have the strength to walk all the way,” Gaurav said. 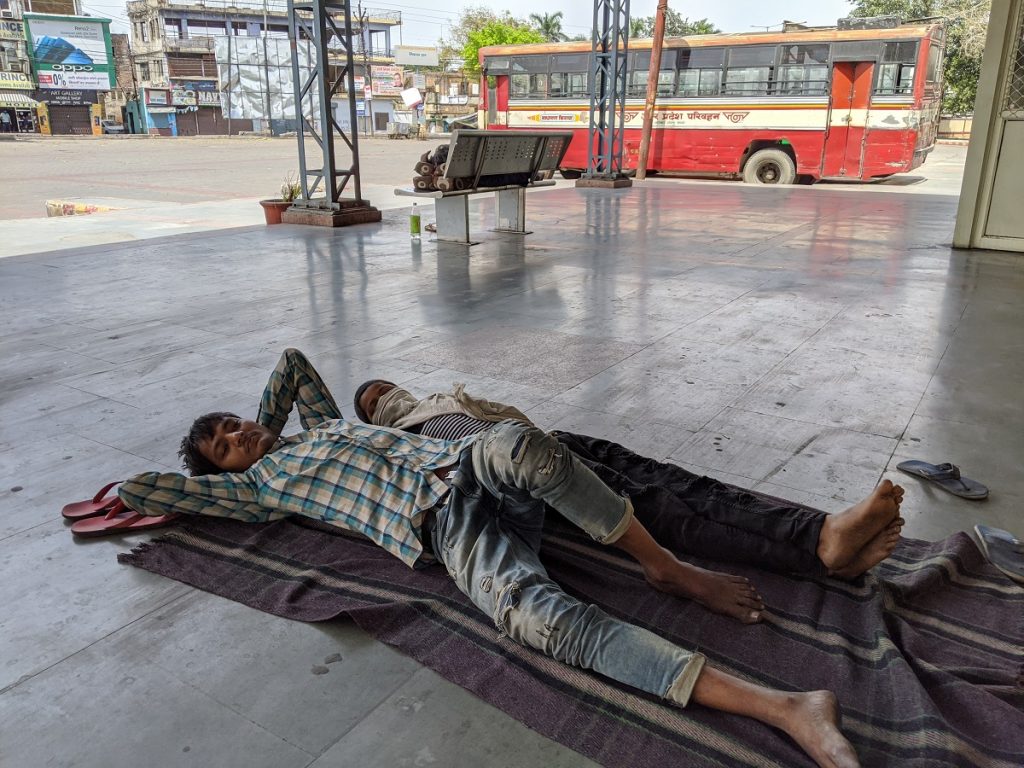 “Modi should have given us at least a day to go back home. He has no idea how poor people have to suffer,” said Vishnu. “We have nothing to eat and no money. If that policeman does not give us food again, we don’t know if we will be able to eat.”

Vishnu is trying to convince Gaurav to begin the journey back to Bulandshahar. “I can walk. Don’t underestimate me. And what other choice do we have?”