India Cannot Forget its Migrant Workers Stranded in the Gulf

While there has been loud appreciation of the government for conducting overseas evacuation operations, Indian migrant workers stranded in the Gulf in deeply abusive conditions seem to be missing from this conversation. 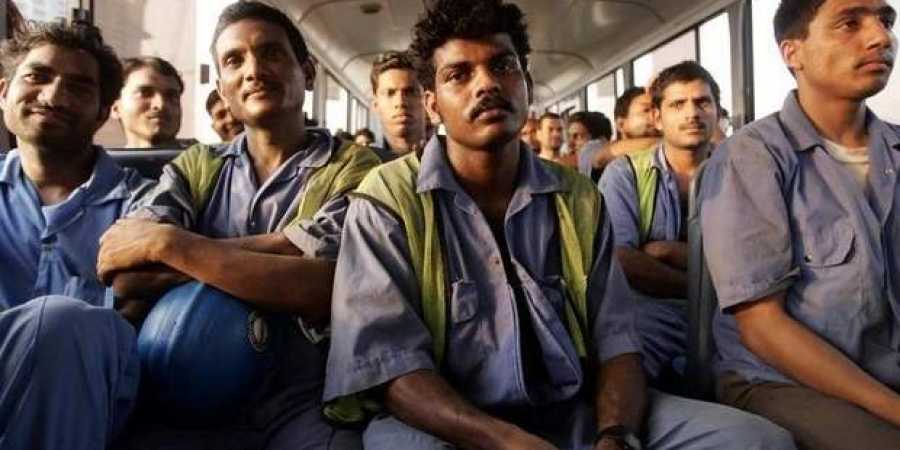 Representational image of Indian workers in the Gulf. Photo: Reuters

As India continues to battle its way through COVID-19, and we witness the heart wrenching exodus of migrant workers across the country, we must also remain alive to the plight faced by migrant workers stranded outside India, particularly in the Gulf states.

India sends more workers abroad than any other country.

According to the Ministry of External Affairs estimates, 8.5 million Indians are at present employed in countries like Saudi Arabia, the UAE, Kuwait, Qatar, Bahrain and Oman, a vast majority of who are involved in low-skilled labour. India is also the largest remittance receiving country worldwide – a trend that is likely to get affected with the outbreak of the pandemic.

The flagrant violation of migrant workers’ rights in the Gulf states has been documented extensively. Common violations include confinement, non-payment of wages, denial of labour rights and benefits, forced long working hours, confiscation of passports, non-provision of medical and insurance facilities.

These exploitative conditions faced by migrant workers are reflected in the alarming number of complaints relating to labour abuse received by the MEA. Between January-October 2019 itself, the MEA received 15,501 complaints.

There have been at least 33,988 deaths of migrant workers in the Gulf from 2014 to October 2019 – figures that are only indicative of the tip of the iceberg, and a cause for worry in the present times.

Although the number or nationalities of infected migrant workers has not yet been declared, Qatar confirmed that a disproportionate majority of the people diagnosed with COVID-19 are migrant workers, 238 of who resided in the same compound.

This trend is dangerous for Indian migrant workers in the Gulf, who often reside in overcrowded labor camps in abysmal living and working conditions, which makes them increasingly susceptible to falling prey to the virus.

In the wake of lockdown in several Gulf states, a large number of migrant workers have been quarantined in their camps.

In this context, some looming questions remain.

Whether migrant workers experiencing symptoms have access to testing and medical facilities; whether the lack of timely diagnosis and treatment is coupled with the high risk of transmission owing to the cramped conditions in which they reside; whether access to food, water and sanitation is being secured; whether they are permitted to avail paid quarantine leave; whether asymptomatic workers are being compelled to work.

Reportedly, some workers in Saudi Arabia were required to work while their Saudi counterparts could avail themselves of paid quarantine leave; several workers in Doha trapped in “coronavirus prisons” have been asked to go on unpaid leave until further notice and have irregular food supplies; while others have restricted access to healthcare and are worried to report ailments for fear of getting deported.

The MEA has established a 24×7 Control Centre at the South Block, and is reportedly closely monitoring the situation in the Gulf. Indian Consulates have set up emergency helplines and issued advisories. Prime Minister Modi has been assured by the Crown Prince of Abu Dhabi and the Emir of Qatar, that personal attention will be given to the health and safety of Indian nationals.

While there has been a loud appreciation for the Indian government for conducting evacuation operations from China, Iran, Israel and Italy, and there have been demands for rescuing students and pilgrims, Indian migrant workers stranded in the Gulf in deeply abusive conditions seem to be missing from this conversation.

It is the need of the hour for India to refrain from adopting an “out of sight, out of mind” approach. It is imperative for India to include these forgotten migrant workers in rescue operations, and ensure, through consulates and liaising with foreign governments, that adequate testing kits and medication are deployed towards securing access to medical facilities, relief measures and habitable living conditions are provided.

The complete absence of measures to secure the well-being of these migrants will prove to be fatal. India must take immediate steps towards fulfilling its constitutional commitments and international obligations towards non-discriminatory access to healthcare and equal treatment, and save its nationals stranded abroad.

Sanya Kumar is an advocate practicing in New Delhi. She has previously worked on disproportionate use of capital punishment against South Asian migrant workers in the Gulf states.