Bihar’s Weavers Caught in the Warp and Weft of Crisis

The lockdown brought a troubled handloom and power loom sector in Gaya and Bhagalpur to its knees. Following a home ministry order of April 15, some power looms in Gaya are functioning, but in the absence of state intervention, reviving the larger crisis-ridden sector will be difficult. 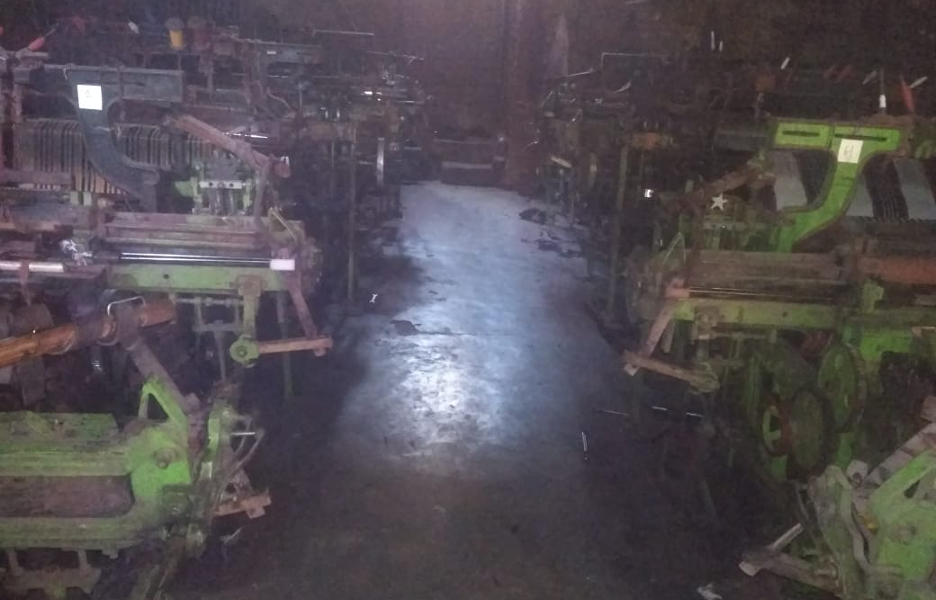 Gaya/Bhagalpur (Bihar): As the looms in Gaya and Bhagalpur districts fell silent on March 25, a day after the nationwide COVID-19 lockdown was imposed, handloom and power loom weavers were plunged into gloom.

They were already facing problems such as the high price of yarn and scarce availability of dyes in the local market. Still, the informal sector was managing to function. After the lockdown, about 11,000 power looms in Gaya, and 4,000 handlooms and 15,000 power looms in Bhagalpur, lay idle.

The fortunes of about 5,000-odd households in Gaya are tied to the power loom sector. In Bhagalpur, handlooms and power looms sustain about 1,500 and 30,000 families, respectively.

The saga of Patwa Toli in Gaya

With the cessation of activity in March, the weaving community of Gaya, once known as the ‘Manchester of Bihar’, slipped into a lockdown-induced daze.

As it is, the ‘village of weavers’, Patwa Toli, is more famous today as the ‘IIT factory’ of Bihar, having produced about 300 engineers, mostly from the Indian Institute of Technology (IIT) in the last 25 years or so. Still, the power loom units of Patwa Toli have the capacity to manufacture more than two lakh gamchhas, the traditional  towel, in a day. Apart from gamchhas, they produce bedsheets which have a market in West Bengal, Uttar Pradesh and Odisha.

Before the lockdown, Patwa Toli’s power loom units supported almost 35,000-45,000 people whose livelihoods were tied up with them, including related activities such as dyeing, bleaching, trading and transport. It is locals who are involved in this supply chain. In the wake of the lockdown, they lost their livelihoods. 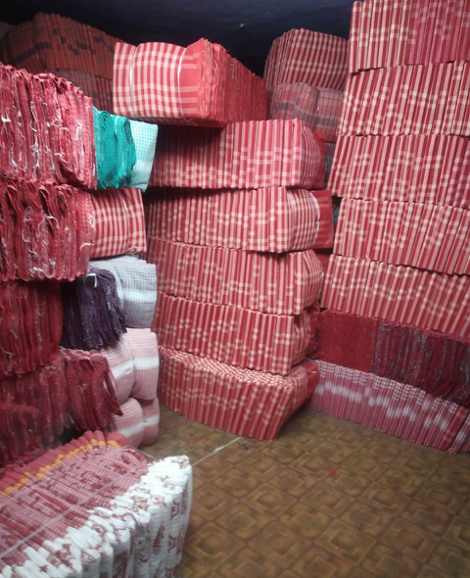 In this scenario, an April 15 order by the Union Ministry of Home Affairs to the Bihar government to resume the production of gamchhas in Patwa Toli has come as a surprise and relief, says Patwa. “At present we have a stock of 50 lakh gamchhas with us, but the demand is for much more than that,” he discloses.

When contacted, Bihar minister for industries Shyam Rajak told The Wire, “As per the Central government’s order to reopen units manufacturing essential items, Bihar government has permitted resumption of power looms in Patwa Toli to manufacture masks and gamchhas as part of essential items.” A strict observance of the rules of social distancing laid down by the administration is a must, he emphasised.

As of now, about 1,500 looms are functioning. Only those who had a prior stock of yarn have been able to resume work.

The power loom owners of Patwa Toli have got exemption under a special provision from the Central government. 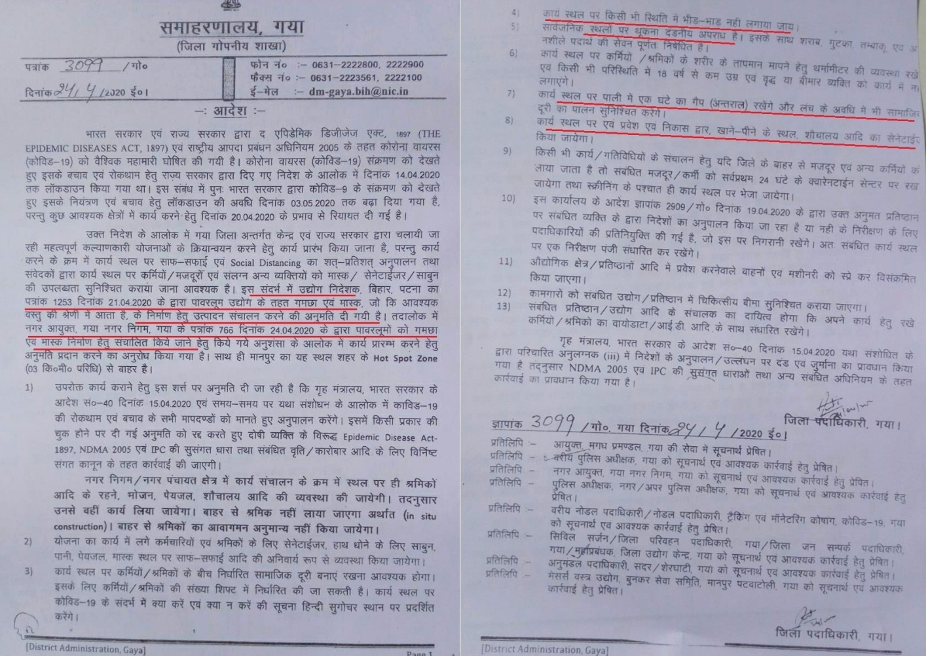 The functioning power loom units are expected to abide by the instructions of  the Gaya district administration. Apart from ensuring that social distancing is strictly observed, the  power looms owners have to take care of the  food, lodging and medical care arrangements for the labourers. They also have to ensure that outsiders such as cloth traders and customers from local areas do not enter the working premises.

A section of the weaving community in Patwa Toli attributes the orders for masks and gamchchas that have come its way to the fact that Prime Minister Modi was seen covering his mouth and nose with a Manipuri gamchha. This section of weavers is hopeful of a growth in the demand for their gamchhas as well.

However, at present the 1,500 power looms that are functioning have provided about 5,000 people employment for now. But for the 30,000 odd people who are still out in the cold, there is a question mark over their future.

The weavers of Bhagalpur are also in crisis. They have been facing problems for a while now and the lockdown has dealt them a hard blow. 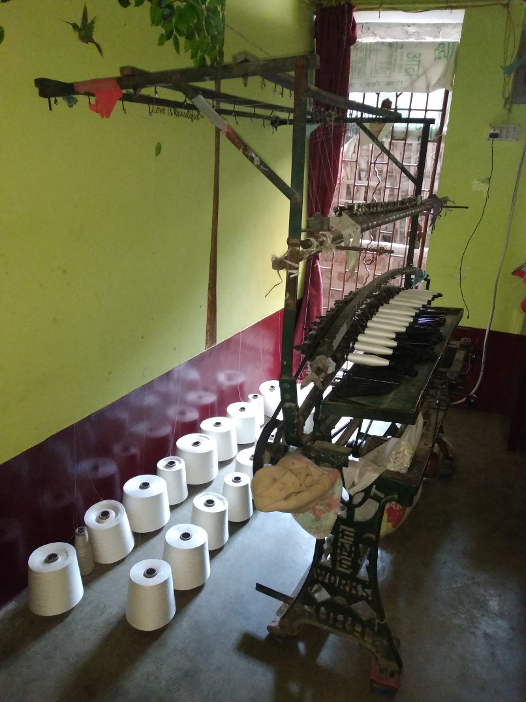 Home is the workspace: A handloom in the house of a weaver in Bhagalpur. Photo: Saurav Kumar.

Handloom silk weaving has traditionally been a family enterprise carried on at the household level, involving all family members. Once known as the city of silk, Bhagalpur has lost its dominant position. The levels of production have also dropped. Weavers not only face a financial crunch; they are also affected by dwindling numbers (the younger generation among the traditional weaving communities are keen to move away from what they see as a labour intensive and unremunerative work).

Not much assistance has been forthcoming from the government to shore up the craft which is recognised across the world. Due to many factors, the popularity and market of Bhagapur’s Tussar silk is becoming more and more localised. For most of the handloom weavers, concentrated in the two pockets of Nathnagar and Champanagar, their home is their workspace.

Shishupal, who works on a handloom but also owns a couple of power looms, is based in Nathnagar. He says, “The coronavirus pandemic has devastated our business. Since we cannot buy yarn from the local market due to the lockdown, we are left with no yarn. Before the lockdown I was earning up to Rs. 10,000 but all that has stopped. The state government should intervene before our situation worsens.”

“Weaving has traditionally been confined to certain sections of society,” says Shishupal. He elaborates, “Among Hindus, it is mostly people from the Scheduled Castes who engage in this craft – we belong to the Tanti caste. Among Muslims it is the lower-class Ansaris who are weavers. It is a hereditary occupation and we have done our best to preserve it. But we expect the government to lend a helping hand.”

Shishupal is referring to the problems they face, such as the inferior quality of yarn and the lack of credit facilities despite announcements to the contrary by the state government. Even those in the power loom sector say there is much talk of training, but it is not followed up.

Shishupal’s grievances are echoed by Prem Kishor Sah. He says, “I own six power looms and none of them is functioning due to the lockdown. The workers who earn a daily wage of Rs 400 to handle the power loom are the worst affected.” 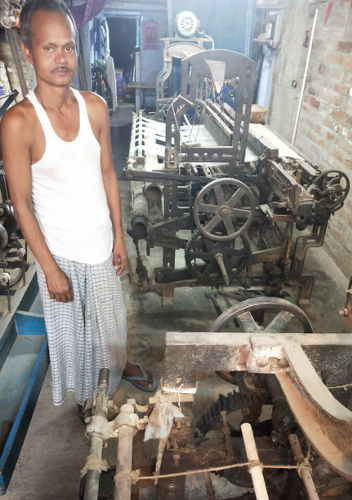 A power loom worker: the worst affected by the lockdown. Photo: Saurav Kumar

Sah points out that in 2016 the textile ministry at the Centre  had come up with an In-Situ Upgradation Scheme for plain power looms. There were several components to it – extending financial help to the economically weaker power loom owners, upgrading the looms to semi-automatic ones, and providing marketing support. “But none of the benefits reached us. What has reached us is the lockdown,” he says with a helpless shrug.

Over the years, one big issue for Bhagalpur’s power loom owners has been the question of what they deem to be an adequate power subsidy.

Clearly, the lockdown will have far-reaching implications for the weaving sector. Reviving the heavily disrupted supply chain, that too in a sector which is already in a weakened state, will be a difficult proposition.

In a sense, the lockdown has exposed the fragile condition of the weavers’ community not only in Gaya and Bhagalpur but across the state. Bihar is home to about one lakh handloom and power loom weavers whose presence can be an important asset for the textile industry, be it for the domestic market or for export. But until there is a concerted move by the government to tackle their problems in a holistic manner, the weavers will be left to fend for themselves. And that, as the lockdown shows, will only lead them towards unrelieved despair.