Twenty crore workers from 10 central trade unions are expected to participate in the two-day strike. The Mamata Banerjee government in Bengal said that no employee of government offices would be granted personal or casual leave on these days. 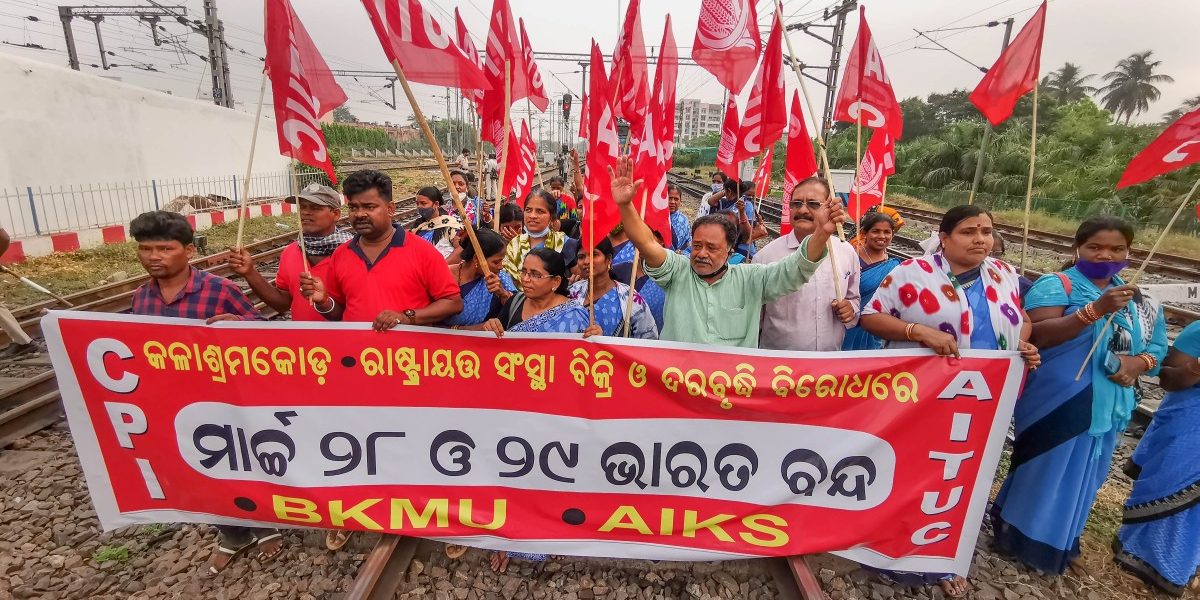 New Delhi: The two-day Bharat Bandh called by a joint forum of central trade unions with the alleged support of nearly 20 crore workers in the country, began on Monday, March 28, from 6 am.

The strike is expected to impact the functioning of numerous sectors all over the country, including banking, power, transportation, and more.

The decision to call the nationwide strike came after a meeting of the joint forum in Delhi on March 22. According to a statement issued by the joint platform then, the protest is against the “anti-worker, anti-farmer, anti-people and anti-national policies” of the Union government.

According to Amarjeet Kaur, general-secretary of the All India Trade Union Congress (AITUC), 20 crore workers from 10 central trade unions are expected to participate in the strike.

Besides, organisations such as the All India Bank Employees Association (AIBEA) and farmers body the Samyukt Kisan Morcha (SKM) have also extended support to the movement.

The Bharatiya Mazdoor Sangh (BMS), which has affiliations to the Hindu organisation, the Rashtriya Swayamsevak Sangh (RSS), said that it will not participate in the strike, calling it “politically motivated”.

Support for the bandh has come from many states across the country. According to Kaur, the entire coal mining belt of Jharkhand, Chhattisgarh and Madhya Pradesh are participating, and that there has been a “good response” from the industrial areas of Assam, Haryana, Delhi, West Bengal, Telangana, Kerala, Tamil Nadu, Karnataka, Bihar, Punjab, Rajasthan, Goa and Odisha.

Their demands include the scrapping of the labour codes, no privatisation of any form, scrapping of the National Monetisation Pipeline (NMP), increased allocation of wages under MNREGA (Mahatma Gandhi Rural Employment Guarantee Act) and regularisation of contract workers, among others.

Watch | Explained: What Is the National Monetisation Pipeline?

Ahead of the bandh, the power ministry issued an advisory to all state governments and electricity authorities to prepare for the disruption and ensure that all grids function normally, around the clock on March 28 and 29. It also asked all regional and state control rooms to remain on high alert during the protest period.

Banking services were impacted in several regions due to the strike, given the involvement of AIBEA employees in the bandh. However, according to an Economic Times report, this effects were limited to public sector banks and were felt more prominently in the eastern regions of the country.

Some banks, such as the State Bank of India (SBI), had warned customers of disruptions before the bandh began.

Bank unions are reportedly protesting against the Union government’s decision to privatise two more public sector banks, as announced in the Union Budget 2022. Apart from the AIBEA, the Bank Employees Federation of India (BEFI) and All India Bank Officers’ Association (AIBOA) are also part of the two-day strike.

Protestors in West Bengal were seen putting up rail and road blockades in the state to stop vehicles from plying. At the Jadavpur Railway Station, members of the opposition Left Front alliance were seen gathering in large numbers to block the tracks.

Meanwhile, at Kulgachhia station, two Left Front workers were reportedly injured after a narrow escape while trying to stop a moving train. The train was reportedly moving in order to get the protestors off the tracks.

However, when the bandh was announced, the Mamata Banerjee-led Trinamool Congress (TMC) state  government declared in a memorandum that all state government offices would remain open through March 28 and 29.

It also noted that no employee of these offices would be granted personal or casual leave on these days.

The government’s decision drew flak from trade union leaders for not supporting their cause. Anand Sahu, the Bengal chief of the CITU told news agency PTI that, “The dispensation (of the TMC) is showing its true colours by opposing the strike which has been called to protest against the Narendra Modi regime’s policies against workers, farmers and general people.”

Government offices remained closed across Kerala on the first day of the protest and the state was characterised by empty streets. This was not just restricted to public transport as reports came in of protestors stopping private vehicles from plying as well.

Kerala | To protest against government policies, different trade unions have called for a nationwide strike/bandh today & tomorrow, March 28 & 29. Only emergency services are excluded from the strike.

State-run KSRTC buses did not operate while taxis, auto-rickshaws and private buses kept away from the roads across the state. Commercial vehicles including trucks and lorries are also not plying, in solidarity with the strike.

Emergency services, however, were exempt from the bandh, which included hospital and ambulance services, as well as the delivery of milk, newspapers, and so on. State police also arranged for transport facilities for those who have reached the Thiruvananthapuram Central Railway station to travel to the Regional Cancer Centre.

Protestors, however, tried to prevent employees of Bharat Petroleum Corporation Limited (BPCL) from entering the office premises in Kochi. The Kerala high court on Friday had prevented employees from five trade unions in the company from participating in the protest.

Similarly in Tamil Nadu, public transport has seen considerable disruptions with only 20% of buses reportedly plying. The LPF, one of the trade unions part of the joint committee which called the strike, is affiliated with the ruling Dravida Munnetra Kazhagam (DMK) party in the state.

Trade union workers and members of Left parties were also seen protesting and blocking road and rail traffic in Vijaywada in Andhra Pradesh, Bhubaneswar in Odisha, among other parts of the country.