Since March 2017, when the Central government-owned mill was shut down, 83 former employees have died; four by suicide, 79 due to lack of funds for medical treatment. 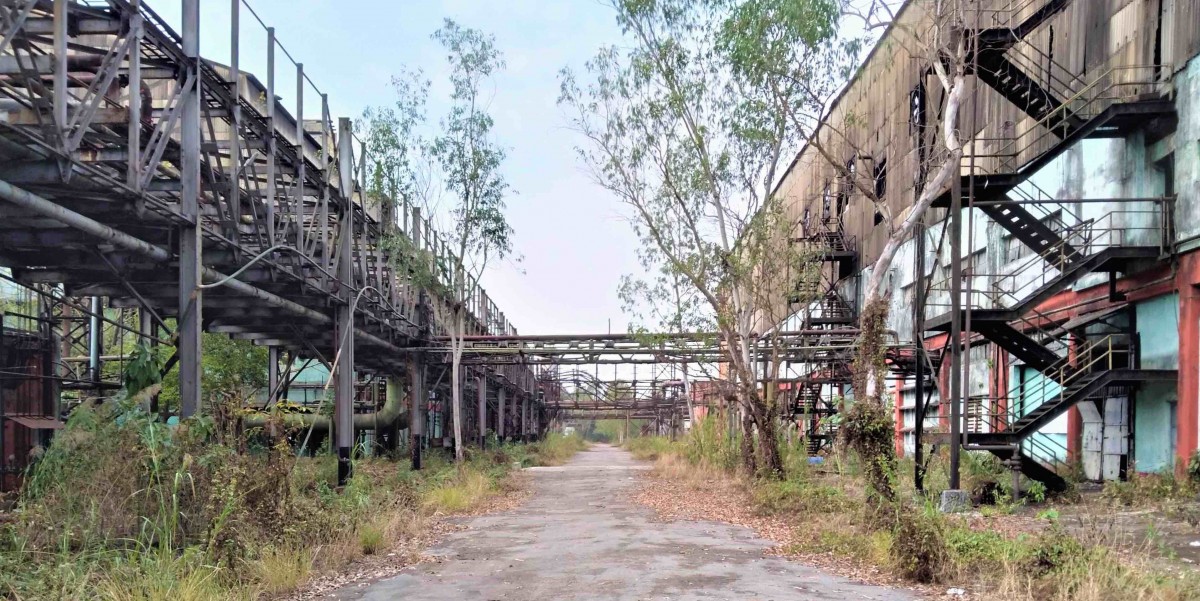 A road at the the sprawling premises of the defunct Nagaon Paper Mill. Photo: Gaurav Das

Jagiroad (Morigaon District), Assam: The walls of the various departments in the abandoned Nagaon Paper Mill are adorned with faded motivational posters. In the dusty emptiness of the finance and accounts department, one of these posters reads: “Anything is Better than Lies and Deceit”.

Today, on March 13, it has been four years since the Nagaon Paper Mill was closed. For its former employees, this poster is a stark and ironic reminder of the state machinery’s ‘deceit’. 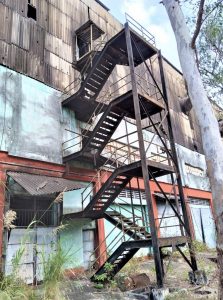 The abandoned four-level stairwell that leads to the many levels of the production assembly line. Photo: Gaurav Das

The employees of the Nagaon Paper Mill and the Cachar Paper Mill, which closed in October 2015, have not received their salaries and other dues since February 2017 and December 2016 respectively. Both mills were owned by the Central government-controlled Hindustan Paper Corporation Limited (HPCL) and were closed due to a shortage of working capital.

Condemned to lives of penury, 83 of these former employees have died since March 2017; four by suicide. The latest death occurred today, March 13, when Imran Ali Thakuria, who worked as an electrical technician in the design department, died of a liver ailment for which he could not afford treatment. Earlier this week, on Monday, March 8, Mohan Hazarika, a former second-grade operator at the Nagaon paper mill, also succumbed to an illness that he could not afford to have treated.

“What happened to the BJP’s promise of acche din (good days)?” many of Nagaon paper mill’s former employees asked The Wire. “The BJP has blood on its hands.”

They feel particularly let down by the party as Prime Minister Narendra Modi himself, in the run-up to the last assembly elections, had said he would ensure the revival of both the mills while speaking at a rally held at Kalinagar area of Cachar on March 26. The promise was not kept.

‘I will soon be homeless’

Two legal cases filed by the paper mill employees’ union are still being heard at the Delhi high court and at the National Company Law Tribunal (NCLT). But any respite, if it does come, will arrive in the future. In the meantime, the former employees of these two paper mills in Assam suffer untold hardships. When the BJP, which is contesting the forthcoming assembly elections in the state, claims that it is working towards making India and Assam self-sufficient, they feel mocked.

Sunita Biswas, the wife of Rajiv Biswas, a now deceased electrical engineer at the Nagaon Paper Mill, who was on duty on the night of March 13, 2017, when the news arrived that the mill would be shut down, still lives in the mill’s staff quarters. She has nowhere else to go and has yet to receive her late husband’s salary and other dues.

“My husband went into an immediate depression when the news came,” said Biswas. “He had been on night duty and after that night, he went into a deep shock which afflicted him hard enough to make his kidneys fail. Without his salary, we had to use our savings to pay for his dialysis and when he died in September 2019, we were left in penury. I had no money for his funeral expenses. The employees collected money to bear the expenses.”

Sunita Biswas at her staff quarters, which serves as her only home as she has nowhere to go. Her husband Rajiv Biswas, an electrical engineer died in 2019. He went into depression after the mill was closed. Photo: Gaurav Das

Biswas’s oldest daughter now gives tuition to the children of faculty members at the university where she studies to cover her college fees. The younger child is still at school, though Biswas had to request the school principal to waive the annual fees.

“I ask, where are Himanta Biswa Sarma and minister Pijush Hazarika?” Biswas asked The Wire. “It is election time and I hear their vehicles’ sirens every time they pass by on the highway. They do not even have the decency to come and meet us. Where are the acche din that Modi promised us?”

Biswas’s late husband’s colleagues Katsing Bordoloi and Nirmal Hazarika are terrified that the banks from where they took housing loans may soon seize their homes. Both have been served with bank notices. In December 2018, Bordoloi had attempted suicide after receiving a notice from his bank. He was saved by his colleagues. 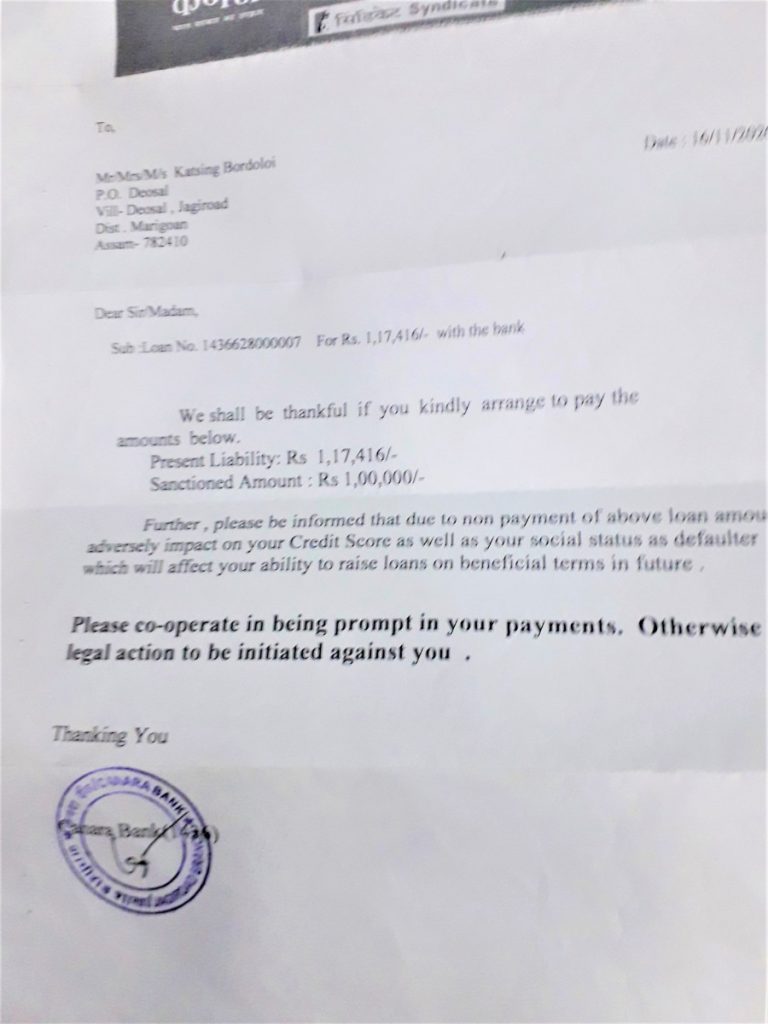 The bank notice which was sent to Katsing in November of 2020. It says, “We shall be thankful if you pay the present liability of Rs 1,17,416”. Photo: Gaurav Das

“I took a loan of Rs 2.5 lakh in 2005. This amount increased with interest and now I owe the bank about Rs 14 lakh,” said Bordoloi. “I will be homeless in a matter of time. I had been working since 1984 as a lower grade employee and I have no money now.”

Hazarika is distraught. “I had to pull out one child from an MBA institute because I cannot afford his education anymore. The banks are harassing us and waiting to seal our homes. The only chance we have to keep our home depends on the disbursal of our pending dues, but that chance is getting slimmer every day. It seems the government will only be satisfied when we die after being rendered homeless,” he said. 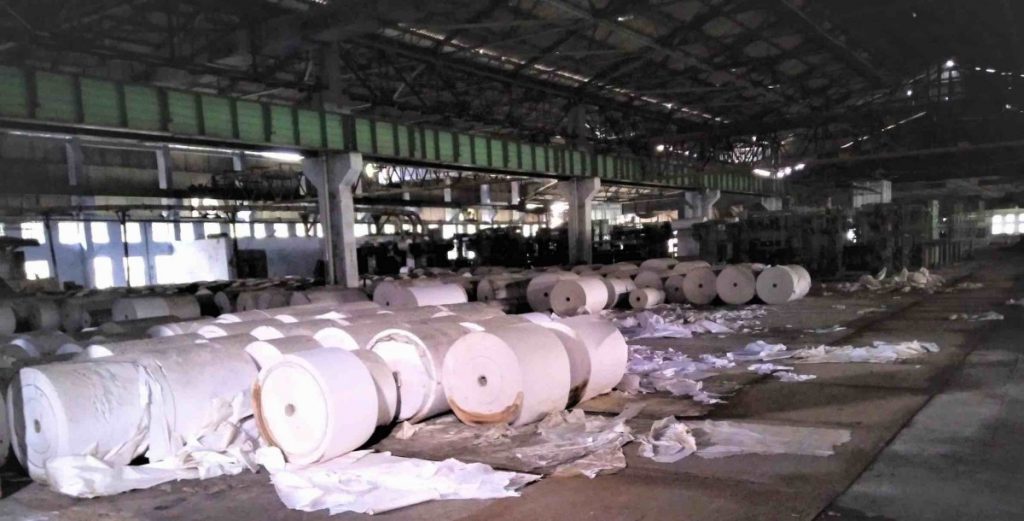 Paper prints, which a former employee says are worth crores, lie in tatters at the mill. Photo: Gaurav Das

‘We gave up our land for the mill’

The closure of the Nagaon Paper Mill did not hurt only the mill’s employees. It also hurt the residents of nearby villages who had given up land for the mills in the 1970s in the hope that their children and grandchildren would always find employment near their homes.

The family of Rekha Bangthai’s late husband, Monebor Bangthai, who worked in the mill’s mechanical department, had donated about 11 bighas of land for the mill in the 1970s in exchange for Rs 75,000.

“I have seen the land record papers,” said Bangthai. “My husband died in 2018 from an injury he had incurred on his chest in 2009 while working in the mill. Though he continued to work after the injury, we were left with nothing when the mill closed. My son is a wage labourer. If the mill were functioning, he could have made a decent living. My husband lost his land and his hard-earned money and I am not getting his pension or dues.”

Panchami Deuri had to allow one of her sons to migrate to Rajasthan to eke out a living. Her late husband, Kachiram Deuri, had worked as a ward boy at the mill’s occupational health centre. Though he died before the mill shut down, his pension, gratuity and other dues are yet to be cleared.

“My son had to go to Rajasthan to earn a living. My husband’s family gave the government 10 bighas of land for the paper mill. Now everything is gone. Will the BJP hear my pleas,” demanded Deuri.

‘PF was deducted, but is not in our accounts’

This past week,  the Joint Action Committee of Recognised Unions (JACRU), the union body of the Nagaon and Cachar Paper Mills, said they had been organising public meetings in Nagaon and Cachar that urged people not to vote for the saffron party. In a press conference, JACRU said that the BJP has been selling all of India’s national assets to private players, placing the common citizens of the country at the mercy of corporates and billionaires.

“With elections around the corner we are urging the people through public meetings to vote for any party except the BJP,” said Ananda Bordoloi, the general secretary of JACRU. “The elections are our only chance. Various Congress leaders have spoken about the closure of the mills. They have raised the issue at both the Rajya and Lok Sabha. But what can they do? They are also helpless as they are not in power. The closure is a conspiracy by the BJP to help the business community in Gujarat. The entire Northeast is impacted by the closure of the two mills. States like Nagaland, Mizoram, Meghalaya and others used to supply bamboo, lime, coal and other materials but the closure has led to the shutting of other ancillary units as well.”

Manabendra Chakraborty, the president of JACRU, told The Wire, “Addressing public at the Kalinagar rally inCachar in 2016, Modi had blamed the Tarun Gogoi government for the shutdown of many industries in Assam. he promised jobs and help for bamboo cultivators of the region. But in the campaign for the 2019 parliamentary polls in Ramnagar area of Silchar, he didn’t say anything about the revival of the mills. We, JACRU, took out a procession but 80 of us were arrested and taken to a jail in Lakhipur, some 80 kms away from the PM’s rally. When Modi boarded the aircraft to return to Delhi, we were let off.”

He also highlighted, “The government-administered management deducted Rs 107 crores for the Provident Fund (PF) from the salaries of the paper mills’ employees between. March 2015 and December 2017, but did not forward this money to the employees’ respective PF accounts. Queen Ojha, the BJP member of parliament, claimed that Rs 100 crore were deposited in the employees’ PF accounts, but the money is not there. We demanded a CBI probe, but there has been no action taken even now.”