Does the Baba use a mask? No. Has he taken a vaccine shot? No. Has the virus made any difference to his well-being? A resounding no. What more is needed to disprove the hollow claims of allopathy? 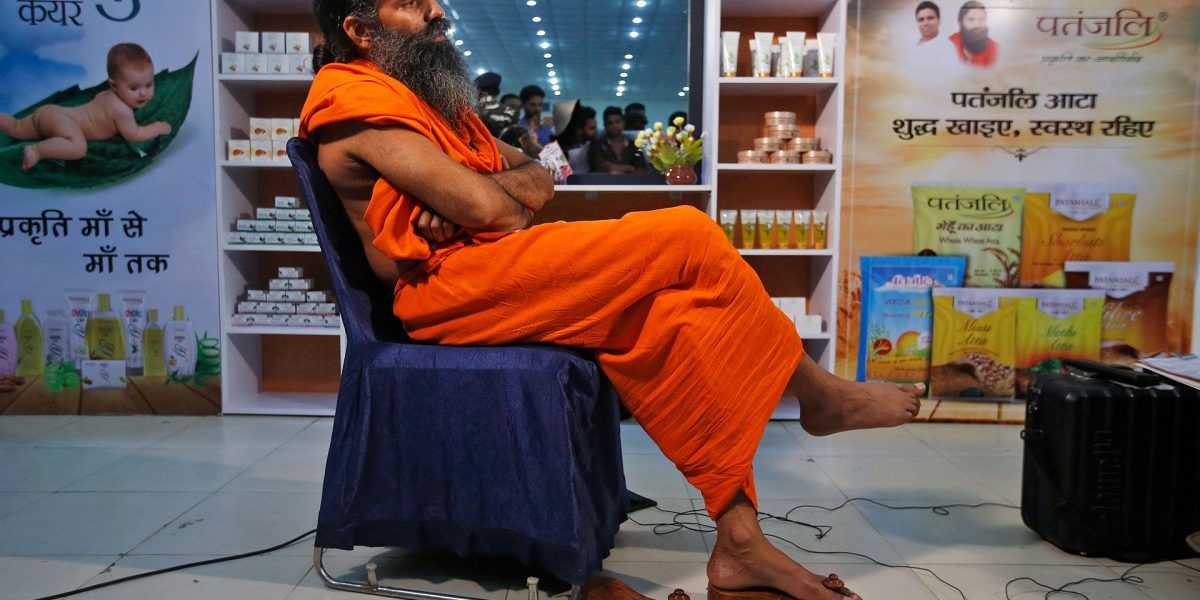 A feat of exceptional grit and imagination that.

Where a Rasputin had merely some placebo potion to quieten an ailing Romanov Prince, Ramdev ji has remedies for every ailment in the book of human disorders.

Little wonder then, that no less than the Union minister of health himself proceeded to the launch of Ramdev’s claimed ‘cure‘ for COVID-19 itself, called Coronil.

Which is not all; news is that the enterprising minister of health in the Haryana government has decided to distribute Ramdev’s ‘Coronil Kit’ to affected people, with half of the cost paid by the state and half by the Patanjali establishment.

The usual suspects who crib against the idea of “new India” question the Haryana government’s munificence in this case when people everywhere are having to pay for vaccines – unlike, in passing, in the richest country in the world, the United States, where vaccines are dispensed free of cost to the citizen.

These poor losers also point out that the Ramdev Coronil drug has no approval from the Indian Council of Medical Research (ICMR), and is hence an unauthorised and potentially dangerous operation. As if such scientific squeamishness has any place when the virus is so insistent.

After all, laws are meant to be broken when the chips are down. And only the spiritually endowed may provide the lead in such eventualities.

As to potential threat to people’s lives, did not the honourable health minister himself once sing praises of indigenous cures, even citing from a book titled Hindu Superiority which underlines how our ancient culture has been ahead of everybody in the matter of medicine? As, indeed, in most everything else – a “universally acknowledged fact” (to borrow from Jane Austen) that makes Bharat Vishwa Guru.

Remember now that Guru Ramdev is no stranger to controversy. What original innovator ever is?

Wasn’t he once in 2006 accused of mixing human and animal ingredients in drugs of his brand? Did not that matter go to the AYUSH ministry for verification? Did they not find, to quote the health minister of that period, A. Ramadoss, “Some violation of the law with regard to adulteration and labelling”?

So what came of that conspiracy? Zilch, and rightly so, since there is no saying, a priori, how much evidence the antagonists of “new India” may fabricate to malign ancient wisdom. 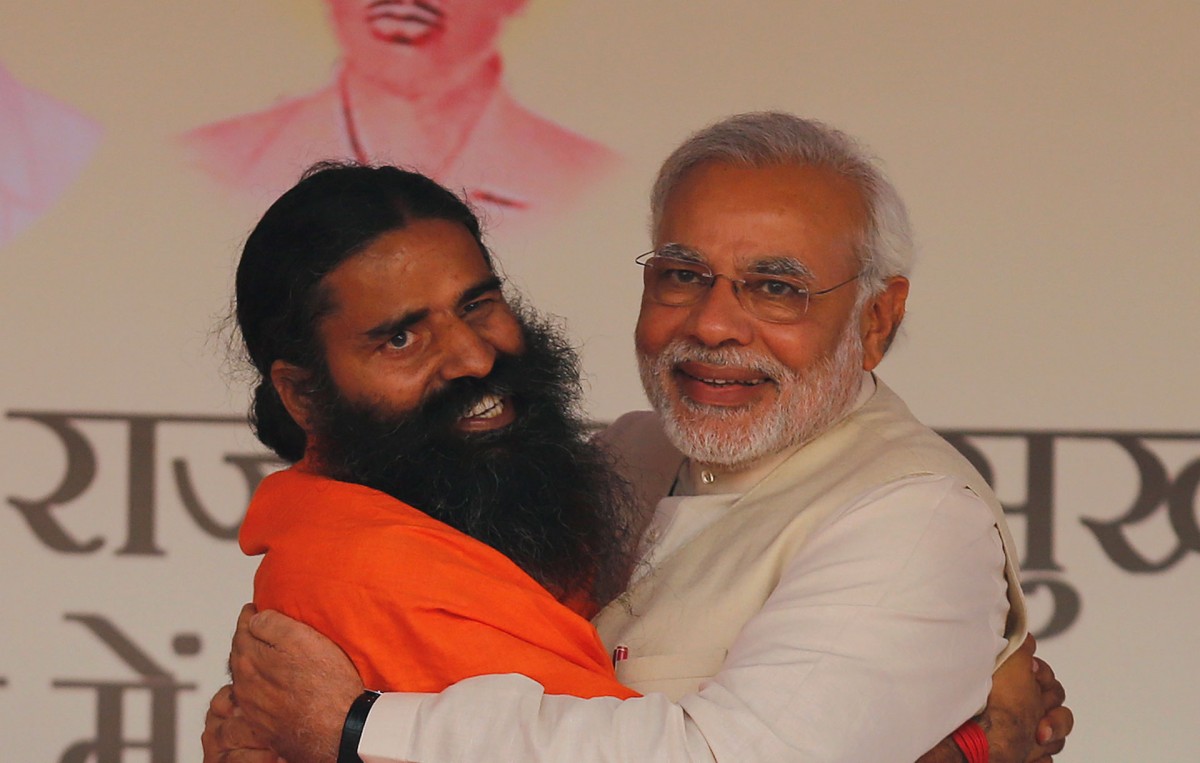 Another accusation that Ramdev Baba’s drugs do not print the detail of ingredients used as required by law is just another attempt to pry into mysteries that make up the magical cures the Baba is able to provide.

Curiosity, as has been well said, only kills the cat.

Allopaths and their poverty of thought

Enslaved by Macaulay, decades of decrepit Congress rule kept denying them the opportunity to revisit the treasures of Orientalist knowledge.

A whole establishment of hospitals and dispensaries thus kept coming up in post-Independence India (although hardly sufficient to meet popular need) which waylaid Bharatiya nagriks into the dangerous pharmaceutical dispensations of allopathy and the never-ending greed of practitioners.

To a point where millions were brainwashed into believing that such epidemics as those of typhoid, small pox, polio etc. were actually eradicated through alllopathic vaccination drives, however conducted without creative controversy.

Any sensible Indian knows that vaccination had nothing to do with those eradications, and that such visitations and their disappearance were foretold supernatural phenomenon to which the dumb-driven allopaths remain obtuse.

Until COVID-19 unraveled the perfidy.

It took a Ramdev ji to underline the grim fact that many doctors who were twice vaccinated still lost their lives. (That an Ayurvedic operator in Hapur also lost his life reportedly cannot but be an interested canard spread by a hostile media channel (NDTV-India, Prime Time, 9 pm, June 2, 2021).

Thus, if a physician cannot heal herself, how may she be expected to heal anyone else?

Does the Baba use a mask? No. Has he taken a vaccine shot? No. Has the virus made any difference to his well-being? A resounding No. What more is needed to disprove the hollow claims of allopathy? “Stupid” indeed this hankering after western systems of medicine, the Guru says.

But alas, the allopaths, even though vanquished, like the good old village school master (Oliver Goldsmith), insist that millions have been cured over the last two years worldwide by their interventions, even as there is no authenticated report yet that anyone has been so cured by Coronil. A seditious rather than a scientific argument.

Alas, deaf to the admonition of the Guru, this lost tribe of allopaths now agitate to see him held accountable for having rubbished their labours and the system of cures they practice.

Not thinking who is to listen to their outmodedly vain plaint in “New India” when their own minister thought if fit to launch the Guru’s Coronil.

Baba Ramdev at the launch of Coronil and Swasari. Photo: PTI

If anything, the honourable minister is to be complimented for seeking some expression of regret from the Baba, not for rubbishing allopathy but making its practitioners feel bad. There is a sensitive minister after all.

For now, negligible, it must be admitted.

Given the revolutionary urgency of the medical make-over from the old to the new, it might be well for the powers-that-be to postpone the barren Central Vista craze that serves no purpose of health and divert attention and resource to revamping the country’s hospitals and dispensaries to dump the old and embrace the infrastructure of the new.

Let the needles, scalpels, x-ray machines, pharmaceutical laboratories of fake research and manufacture yield place to condiments, herbs, expert mixers and spiritually-endowed gurus who best suit the genius of a people steeped in archives of mystery and transcendental insight.

That would be an epochal leap indeed made by “new India” in the altruistic public cause, much more so than a new parliament building so long as residues of the “old India” may continue to be voted into its precincts.

May we trust the good Guru Ramdev Baba to wield his clout and see this policy shift through, sooner than later, before the third dreaded wave of the mlecha coronavirus comes visiting?

Think how far ahead that would put us, as well as cause a bountiful export of Coronil to a world still struggling with allopathic petulance.

We could both cure the world which as we hold is one family (Vasudevakutumbkum), and refurbish our national coffers exponentially to win the race to a $ 5 trillion economy.