Modi Vs His Critics, Or How the World's Largest Democracy Scores Over Its Oldest One

Where pesky activists – and even the Supreme Court in 2004 – saw rights violations and the abuse of power, our judges now see a conspiracy to "keep the pot boiling". Clearly, it's time to make India great again. 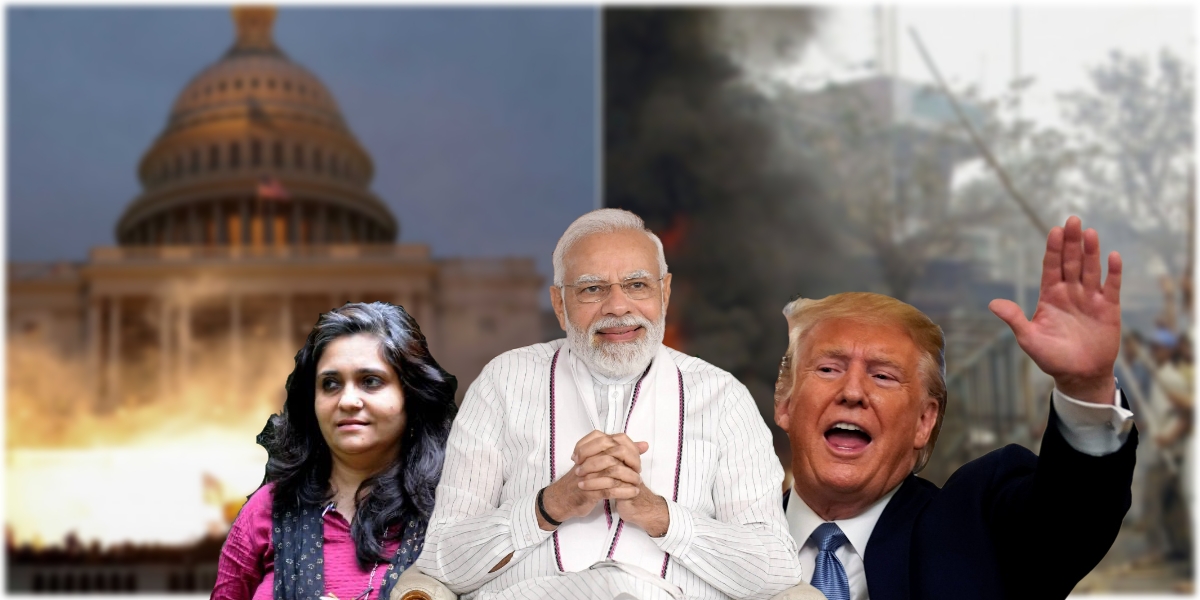 Teest Setalvad, Narendra Modi and Donald Trump. In the background are images from the 2002 Gujarat riots and the January 6 Capitol Hill attack. Illustration: The Wire

It is a fact universally acknowledged that Donald Trump was the greatest American President, greater even than George Washington and Abe Lincoln taken together. He said so himself.

Recognising how Trump’s ambition was to make “America great again,” even our own Narendra Modi felt inspired at a public meeting in the United States to raise the slogan “Ab ki baar Trump sarkar” at the time of Trump’s re-election bid.

And yet, consider how “the system” came to hound Donald Trump for his bold initiatives, and in envy of his project to “make America great again.”

These nefarious conspiracies led to massive cheating against him in the presidential elections of 2020. Even Vladimir Putin knew Trump had been robbed of his victory. But no matter how Trump agonised, his contention that the election had been stolen from him came to be christened the “big lie.” And wherever Trump turned for redress, he was rebuffed by officers and institutions that had so obviously sold out to unAmerican forces.

That the liberal media would hound him was to be expected, but that bureaucrats, technocrats and even judges appointed by him, all the way to the Supreme Court, would turn away from him was a cruelly ironic fate.

And to top it all, Mike Pence, his own choice and pick, developed qualms of conscience and did not carry out Trump’s so-legal injunction that he, as vice-president – charged by the constitution only to examine the certifications of electoral results from the states and then to declare them – send the certifications back to the states for review and likely re-casting of votes by the electors. This was the unkindest cut of all.

Even a patriotic putsch on his behalf mounted by loyalists on January 6, 2021 (now being wickedly investigated by Congress) failed to turn the rebellious tide against him. A vicious conspiracy thus came to cheat a great American from his self-declared right to win elections, however, the votes turned out. Brazen institutions took upon themselves to defy the most powerful man in the world, preferring to shore up their oath of office to the detriment of a promised pristine white future.

And how does India fare in comparison?

This sad narrative from the world’s oldest democracy helps us to highlight the strengths of the largest one.

Ever since Narendra Modi came to office, first in Gujarat, and then in New Delhi, Indians infected by dangerous leftist ideas inimical to democracy have spared no moment to hound Modi, mostly for being, allegedly, a sectarian and autocratic leader. Yet, never once have India’s superlative investigative agencies, judicial outlets or mainstream media houses been taken in by these patently inspired charges to point a finger of suspicion at him.

Nothing evidences the independence and strength of India’s democratic and state institutions than its final, considered response to these efforts directed at preventing Narendra Modi from making India a ‘Vishwa Guru’.

If any doubts were still lingering in the anti-national mind – loyal Indians do not engage in the sophistry of distinguishing the nation from Modi – the honourable Supreme Court of India has now put paid to these persistent efforts to “keep the pot boiling, obviously, for ulterior design”.

Pronouncing on a plea filed before the court by Zakia Jafri to reconsider the Special Investigating Team’s refusal to file a case against Modi in the matter of the Gujarat killings of 2002, when he was chief minister, a three-judge bench of the highest court has in no uncertain terms underscored the nefarious nature of the plea and dismissed the same as having no “merit”. In doing so, it has turned its back on the finding of an earlier bench which, in 2004, had compared Modi to a ‘modern day Nero’. It now has suggested the persons who doggedly pursued the case against Modi themselves now be prosecuted for ‘abuse of process’. On cue as a great upholder of the rule of law, the Gujarat Police swung into action on Saturday and arrested Teesta Setalvad, Jafri’s co-petitioner.

Zakia Jafri has, presumably, been spared because her husband, Ehsan Jafri, was one of those unfortunate souls who were cut to pieces in those riots at the Gulberg Society in Ahmedabad. A former member of parliament, he had been trying to call for help incessantly through the day, including from the office of the chief minister, without finding any response while the police were openly aiding the rioters. Arresting Zakia is probably a bridge too far, but two former Gujarat police officers who had testified against Modi – Sanjeev Bhatt and R.B. Sreekumar – have also been named in the five-page FIR.

Clearly, the honourable court, although it did not say so, understood that the “ulterior design” it identified in the case against Modi was to dislodge an outstanding prime minister who had done yeoman’s work to fortify democratic institutions, secure the fundamental freedoms of expression and religious belief, created widespread optimism about India’s destiny to be global leader and strengthened the economy.

In short, what educated human being, American or Indian, will fail to see how the largest democracy succeeds in upholding the stability of the realm against wrong-headed citizens and compromised political opponents, where the oldest seems bent on dismantling the Trumpian dream of making “America great again”.

It is to be hoped now that so-called democratic challenges to Narendra Modi’s authority and imperial vision will learn to yield to discipline and loyal adherence to diktat.

Only by continuing to sidestep the loose habits of the oldest democracy can Bharat attain the exclusive status long forecast by her rishis and munis.