Witnessing the Bangladesh War of 1971 Through Raghu Rai's Camera

Remarkably, while it was one of the most richly documented popular struggles of modern times, very few compilations exist which provide an overview of the epic struggle. Buses for the refugees were available only into the Indian territories. Photo: Raghu Rai “Kill three million of them,” said President Yahya Khan at the February conference (of the generals), “and the rest will eat out of our hands.”

The executioners stood on the pier, shooting down at the compact bunches of prisoners wading in the water. There were screams in the hot night air, and then silence.

There were to be no witnesses to the massacre. The foreign journalists had all been sent back. The media had been taken over. Those of us in East Pakistan – Bengalis, Paharis, Muslims, Hindus, Christians, Buddhists – were all labeled kafirs. The genocide was to be presented as a holy war. They expected no resistance to ‘Operation Searchlight’ They couldn’t have been more wrong. The brutality was unparalleled, but so was the resistance. 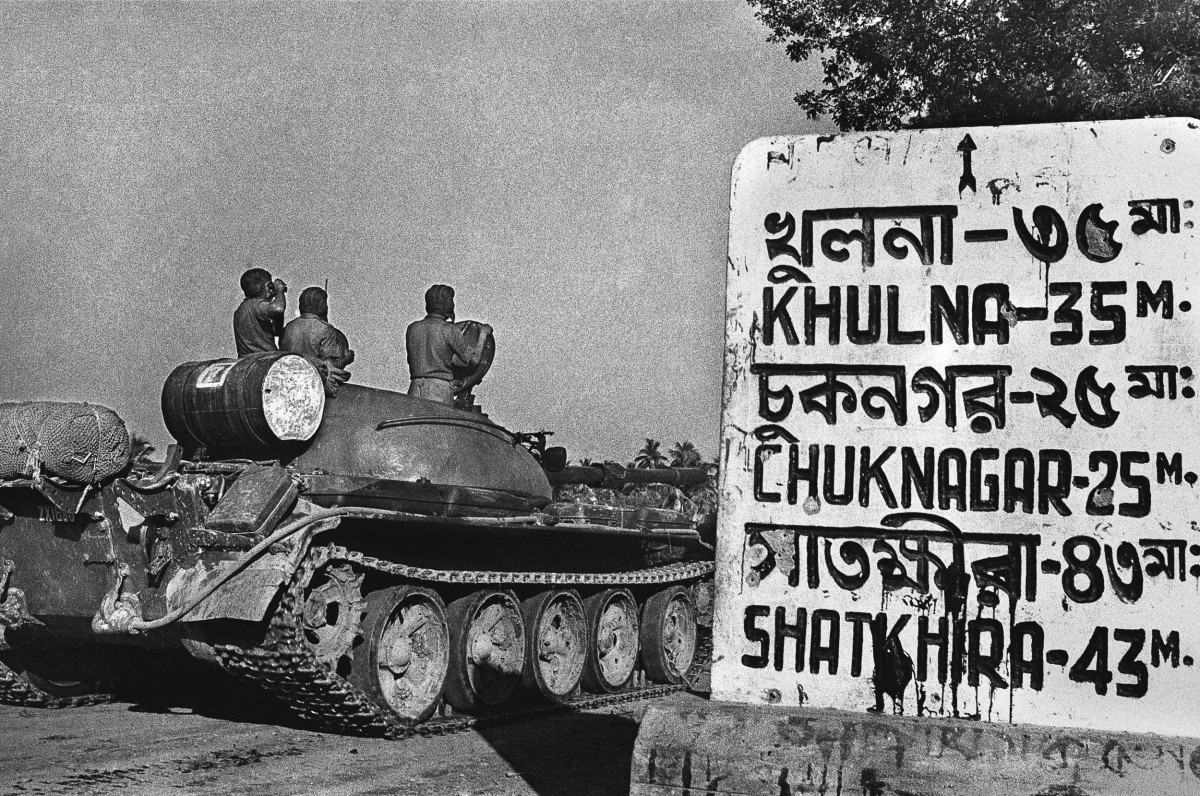 Due to the Pakistani Army’s brutality, the revolt was unanimous, but they did have some paid informers called the razakars who were helping the retreating Pakistani Army to locate the movement of Indian troops near Jessore. Photo: Raghu Rai 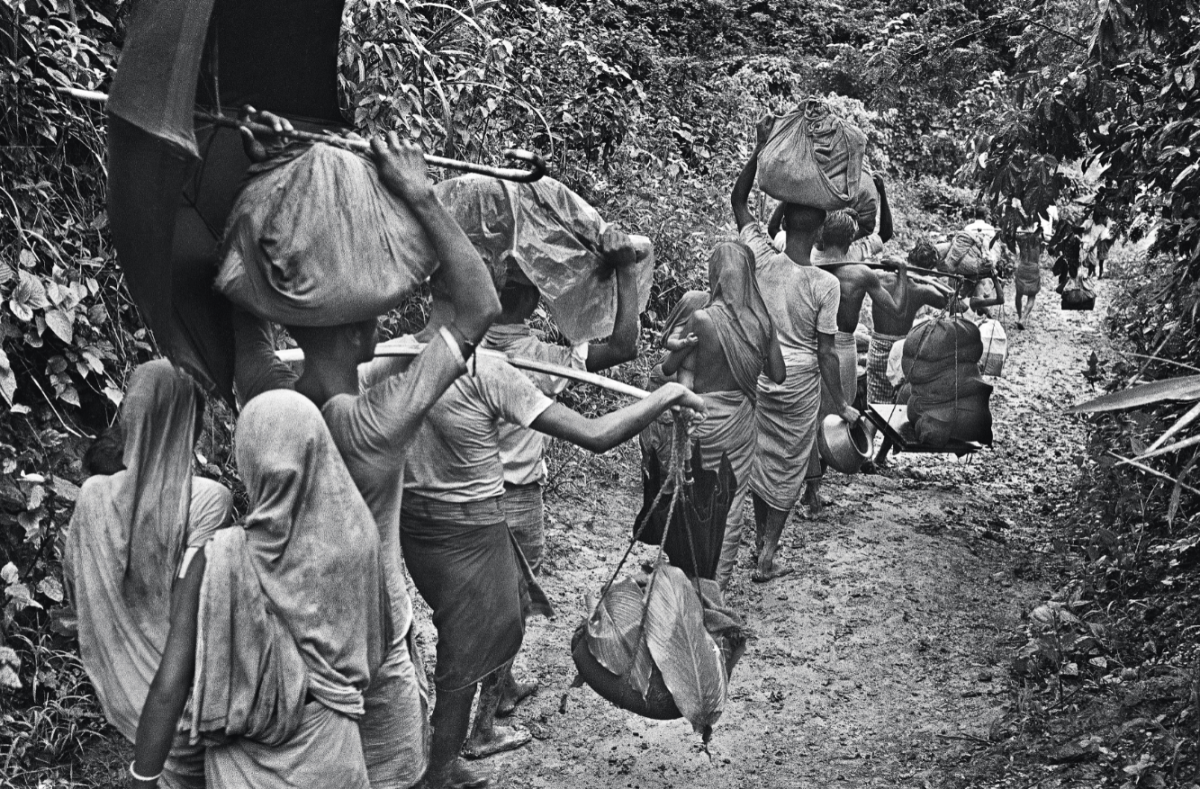 A photo of the refugees. Credit: Raghu Rai

The national elections of 1970 had been the beginning of the army’s rude awakening. As is often the case with autocrats, the general had misgauged the popularity of the Awami League and had not foreseen either the people’s resolve, or their ability to fight back.

Also read: From Karachi To Bay of Bengal, How the Indian Navy Played a Stellar Role in the 1971 War

The clock started on March 25, 1971. It was within the space of a month that the entire opposition was to be decimated. The opposition newspapers, the para-militia and the university bore the brunt of the first assault. Death squads ruled the cities.

The exodus of ten million people is difficult to ignore. Despite the media blockade, word got out. Then came the second surprise. Resistance grew. I was in the Khulna sector of Bangladesh with the advancing Indian artillery heading the attack. Indian soldiers were wounded by air bursts and shelling by the Pakistani Army and were brought in for medical help. Photo: Raghu Rai

Their actions became more desperate. The razakars (local collaborators of the Pakistani Army) consisting of the Al Badr and Al Shams, ran amok. Rapes and killings intensified. Entire villages were burnt. The random killings were augmented with targeted assassinations aimed at instilling fear and establishing authority. Here too, they miscalculated. Rather than ‘eating out of their hands’, the Mukti Bahini (freedom fighters), many of them supported, trained and armed by the Indian Army, slowly gelled into a more cohesive fighting force. It was a people’s war and ordinary women and men performed extraordinary acts of heroism. Mujibur Rahman had called for ‘every home becoming a fortress’. The fear was now in the oppressors’ eyes. ‘Bangladesh: The Price of Freedom’ by Raghu Rai. In a last act of desperation, Pakistan preemptively attacked Indian airbases on December 3, 1971. This opened the floodgates. With India declaring war, the Mukti Bahini now had the open support of the Indian military. The nine-month guerilla war transformed into an all-out attack to vanquish the oppressor. The Pakistani Army surrendered with 93,000 soldiers. While the 13-day war is considered one of the shortest in history, it took a huge toll on Bangladesh. In their dying throes, the Pakistani Army and their collaborators began a selective campaign to kill the intelligentsia of Bangladesh, aiming to destroy the ability of the – now inevitable – new nation to recover. 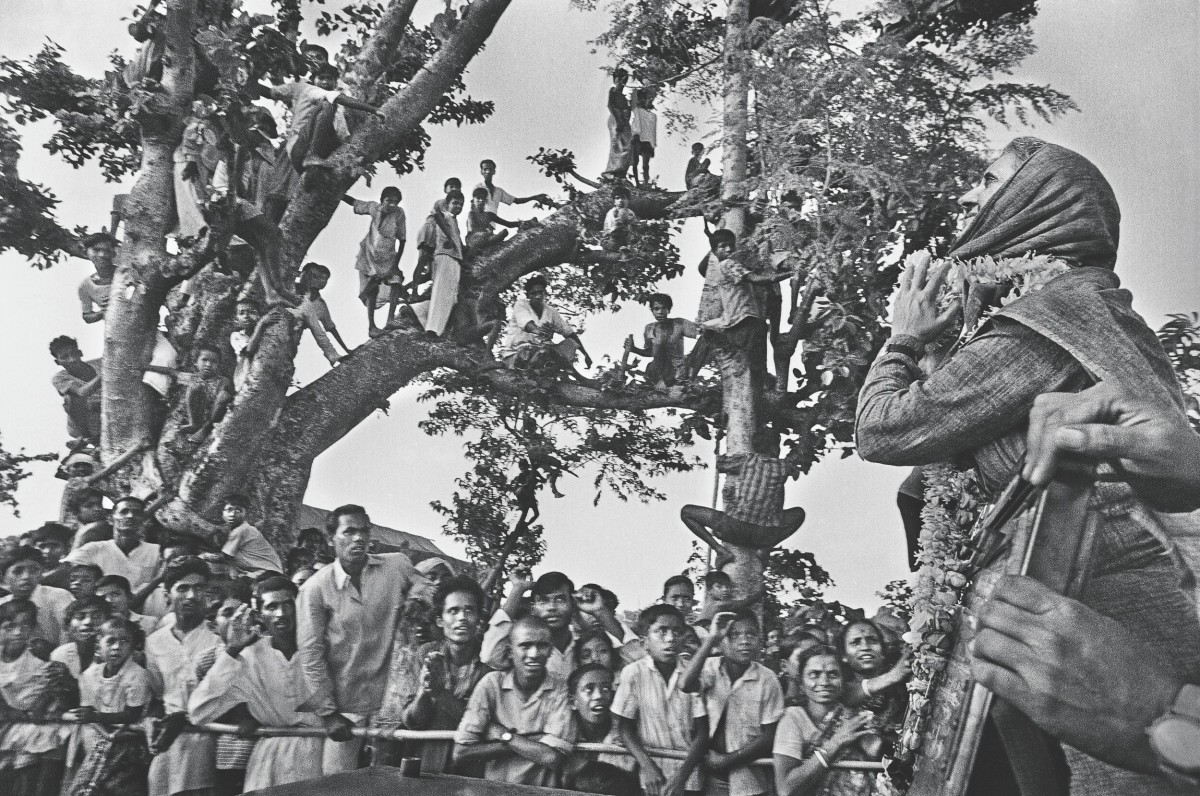 Much like the rest of the world, Indira Gandhi, India’s Prime Minister at the time, did not believe that 10 million refugees had been displaced until she personally visited the camps. It was not just food they needed, the monsoon had brought in cholera and other diseases. Photo: Raghu Rai 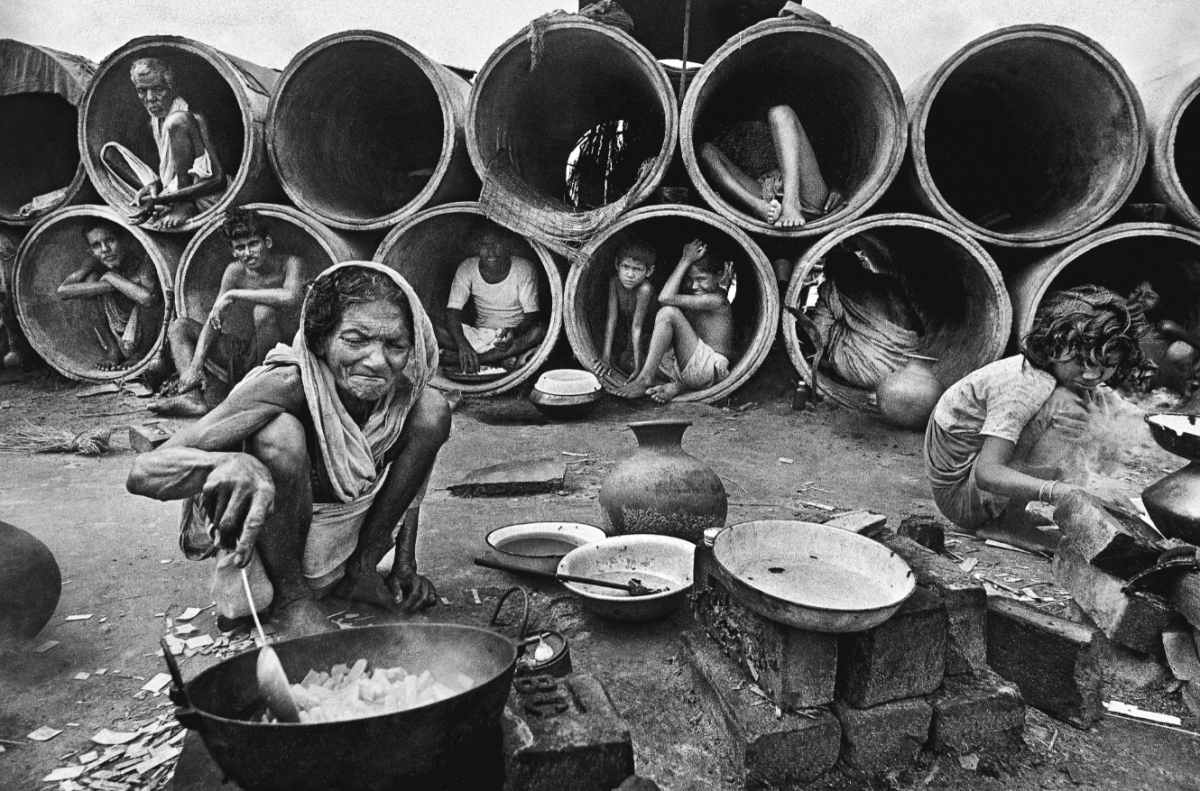 To survive the wrath of the rains, many families took shelter in hume pipes. Photo: Raghu Rai

Much of this was discovered afterwards, when the mass graves were found. It is impossible to know how many such graves there were. New ones have been found even 28 years after the war. During these long nine months, the world wept for Bangladesh. While it is true that the US government sent the 7th Fleet to the Bay of Bengal in support of Pakistan and Henry Kissinger sent a message to General Yahya Khan, thanking him for his “delicacy and tact”, Archer Blood, the US Consul General in Dhaka had also dispatched his famous Blood Telegrams, accurately articulating the horrors that were being perpetrated. Joan Baez, Eric Clapton, Bob Dylan, George Harrison, Billy Preston, Leon Russel, Ravi Shankar, Ringo Starr and many others had gathered at Madison Square Garden in New York, to an audience of over 40,000, to voice their protest and express their solidarity to the Bangladeshi cause. George Harrison’s song ‘Bangladesh’ and Allen Ginsberg’s poem ‘September on Jessore Road’ galvanised world opinion and became the rallying cry for resistance.

Also read: The Pakistan Army’s Operations in East Pakistan Were Brutal and Ruthless

Some of the finest photojournalists of the world also came. Remarkably, while it was one of the most richly documented popular struggles of modern times, very few compilations exist which provide an overview of the epic struggle. Bangladeshi photographers were too vulnerable to make their work public. Some gave away undeveloped films to foreign journalists in the hope that they might make a difference. None of those films ever made it back to them. The books and films that were produced for Vietnam were never replicated for Bangladesh. The foreign publications where images were used were not available for the Bangladeshi public to see. US filmmaker Lear Levin followed a cultural group which sang songs for the Muktis during the war. The raw footage remained in his archives for many years until filmmaker couple Tareque and Catherine Masud created a compelling story Muktir Gaan (The Song of Freedom), combining fresh imagery with the archived footage. 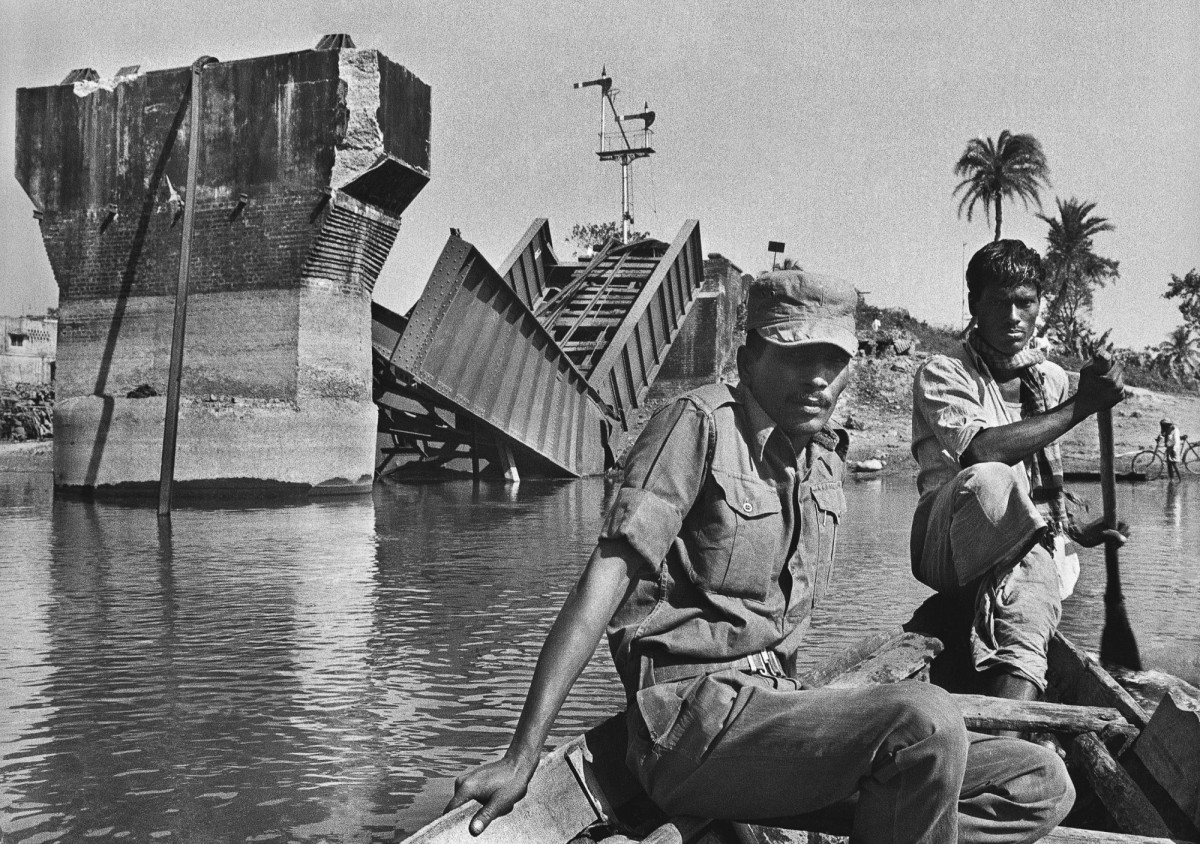 With the help of the Indian Army, exiled Bangladeshi Army officers started recruiting and training members of the Mukti Bahini. Photo: Raghu Rai

The history of the war has been contested, with different individuals and parties trying to make political capital out of the sacrifices of millions. Photographic archives are slowly emerging, some by Bangladeshi professionals and amateurs who took enormous risks to preserve moments in history. The recently found work from the archives of the legendary Indian photographer Raghu Rai is undoubtedly one of the most significant of these.

As we began compiling the work of 1971, I had written, “They had risked all to hold on to this moment in history. The scarred negatives, hidden from the military, wrapped in old cloth, buried underground, also bore the wounds of war. These photographers were the only soldiers who preserved tangible memories of our war of liberation. A contested memory that politicians fight over, in their battle for supremacy. These faded images, war weary, bloodied in battle, provide the only record of what was witnessed. Nearly four decades later, they speak.”

Few speak more poignantly than the negatives of Raghu Rai.

Shahidul Alam is a Bangladeshi photojournalist, teacher and social activist.

All the photos have been taken from Raghu Rai’s book Bangladesh: The Price of Freedom.