Why Atrocity Archives Exist, and Why We Need Them

Atrocity archives are documents of failure – of humanity to stop suffering, to stop this unmaking of the world. In the process they can also serve as documentation of resilience and protest. 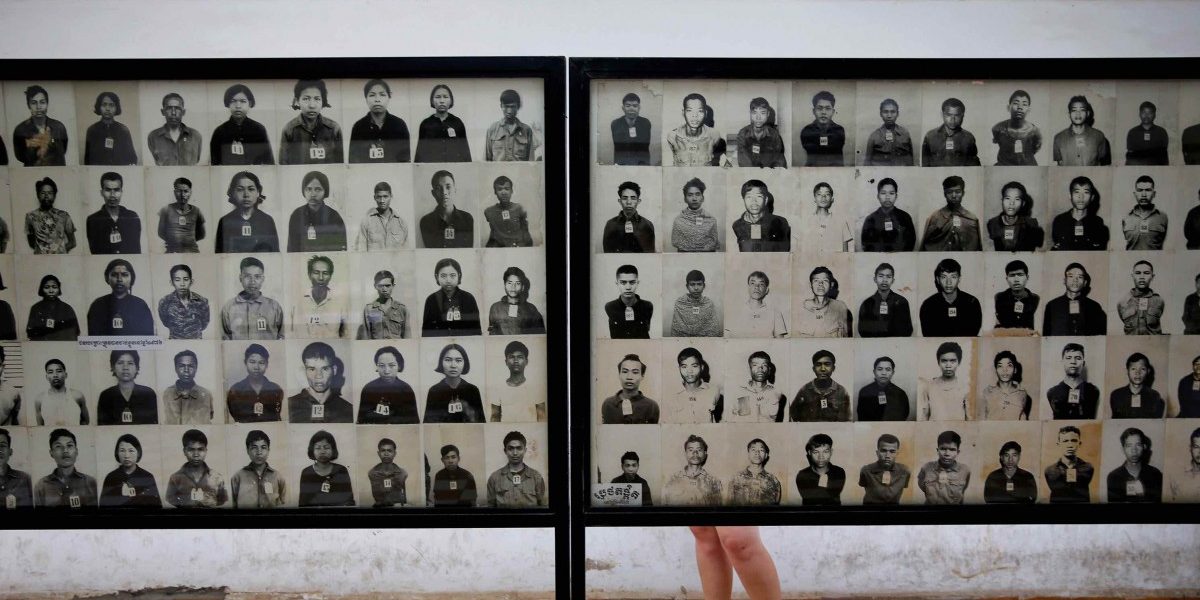 A visitor looks at pictures of victims of Khmer Rouge regime at the former notorious Tuol Sleng prison that is now the Genocide Museum, in Phnom Penh August 5, 2014. Photo: Reuters/Damir Sagol

The first question that strikes even the mentally prepared reader when stepping (metaphorically) into the Genocide Studies Program of Yale University is: how many genocides there have been in the history of modern humanity? The site lists 16, and one “Other”, such extinction events, from the Amazons to the present. Yale also hosts the celebrated Fortunoff Archives of the Holocaust with over 4,000 survivor testimonies.

Then when you meander into the University of North Caroline at Chapel Hill’s library, you enter, if you so choose, the Chinese Cultural Revolutions archives. The 1947 Partition Archive, peopled-sourced, is one of the rare ones in India. Of a slightly different nature is the Indian Memory Project.

Such memorial projects, curated and open for interpretation, are at first glance a campaign against forgetting. But there is much more happening in the atrocity archiving.

In the Cambodia genocide archive are photographs of the thousands who were executed at the notorious Tuol Sleng prison – of the estimated 14,000 incarcerated there (1975-79), seven survived. These snapshots of the doomed were taken by the perpetrators and as such is a self-documentation of their atrocity. The photographs are frontal, like any standard size passport/thumbnail picture. It should be noted that these are not in and of themselves photographic evidence of violation and violence against these individuals, but need to be archivally contextualised for us to recognise that those in the photographs did not survive precisely because those who organised their image-taking also organised their deaths.

The important thing to note is that these victims are unidentified, except for a number. The subhumanisation before complete destruction is the shocking aspect of the gallery: the humans were numbered and then killed, with no other data attached to the photographs. In their numbered anonymity we discover the extent of the regime’s brutality – nothing of the individual must survive. In terms of memory, these photographs represent the ultimate erasure of the human. From the Cambodian archive.

The ordinariness of the photographs is, on reflection, frightening not because of the inherent content but because of the context in which they were taken. In other words, there is a history attached to the very ordinary photographs of very ordinary men and women (many less than 15 years old), just as the photographs of the sick with IVs suspended from trees, grasping oxygen bottles while sitting in autorickshaws and on pavements do not just capture the immediacy of an individual’s suffering – they direct us to the context in which the individual has been forced to take resort to such measures, just to breathe.

It must be noted that unlike the Genocide Archives where the perpetrators kept the records and added to the torment of the individuals by photographing them – one recalls the humiliating photographs from Abu Ghraib – for posterity, these pandemic photographs do not have specific perpetrators. Thus, instead of seeing them as records of/by one perpetrator, one sees the pandemic pictures as a historical record.

This historical record points to two things. First, they capture the vulnerability of an entire population. These are historical records of the defeated. Second, while it may be a bit of a stretch to see them as self-portraits of a troubled state, these pandemic pictures contextually gesture at the failing healthcare systems, an inadequately responsive state and eroded social and welfare structures.  To phrase it differently, atrocity in many such images is not solely in the corporeal debasement and uncertainty of the individuals, but in the forces that have produced their debasement. More than the injury, it is the instrument of their injuries that viewers need to attend to.

Also read: COVID-19 and Crimes Against Humanity: What the Nuremberg-Hague Trials Can Teach Us

(One caveat about this historical record. We cannot be sure which is more horrific: what the photographs reveal or what they hide. But this is in the very nature of such atrocity photographs, as Susie Linfield has argued.)

This is precisely why the images from the ongoing crisis must not only be archived but examined. It is not archivisation alone but what Eric Ketelaar has termed ‘archivalisation’:

“the conscious or unconscious choice (determined by social and cultural factors) to consider something worth archiving.”

While admitting to the plethora of morphed and modified images that flood us today, it would still be possible, with some effort, to unravel what Ketelaar calls ‘tacit narratives’ of the archive, the powers of codification and classification that go into selections, editing and placing of the visual historical record. But to not archivalise is not an option.

The refusal to memorialise ongoing crises, such as Covid, may be in keeping with ‘our’ culture’s tendency to forget because as Arundhati Roy put it in her best-known work,

But the refusal to memorialise is also a refusal to mourn and this further dehumanises the individuals who are no longer with us. The erasure then would be complete, as individuals and as collective victims.

The Unmaking of the World

The Genocide Archives, in which now we may count the pandemic archive, are the exact opposite of the general penchant for monumentalisation. Where the latter is humanity’s paean to itself, for what it has built and built over, these archives are a record of our unmaking of our worlds. The referencing in that previous sentence to Elaine Scarry’s The Body in Pain: The Making and Unmaking of the World, is intentional. Scarry proposes that the pain experienced by an individual signifies a disintegration of the world, even as the disintegration of the world becomes the ‘direct cause of the pain’ of the individual.

The structures of this unmaking, from torture chambers, organised disappearances by the state (Argentina would be a case in point), to the collapse of healthcare, serve as the context for the atrocity archives, including but not restricted to the images discussed above. That is, the atrocity archive, from genocide to pandemics, is a history of unmaking, even as it serves as a reminder for what should not have happened (past) and a manifesto for what should not happen (future).

Atrocity archives are documents of failure – of humanity to stop suffering, to stop this unmaking of the world. In the process they can also serve, if we so choose, as documentation of resilience and protest. In Linfield’s evocative phrasing, the atrocity archive and its ‘photographers … do, and do peculiarly well, is to show how those without such rights look, and what the absence of such rights does to a person’.

Also read: The Potential and Hurdles of Fighting Atrocities in the Age of Social Media

In the case of the genocide pictures, unless there is the documentation of direct hurting (the 1968 photograph of Nguyễn Loan summarily executing Nguyễn Văn Lém of the Viet Cong, winning the photographer, Eddie Adams, the Pulitzer for spot photography), the moment of injury is not visible. Likewise, if we look at the images from the 1932-33 Holodomor of Ukrainians dying, there is no ostensible cause of death, and we can see only the emaciated bodies. In such a circumstance, Uruguayan essayist Eduardo Galeano’s comment that “hunger looks like the man that hunger is killing” is perhaps the most relevant one.

Such atrocity archives point to what Galeano has signalled with his pithy phrase. Hunger, like oxygen or medicine shortage, ought not to exist. The atrocity archive is about a world unmade, hollowed out from the inside.

In the ancient eras, the archives were available only to the archons: the records were housed with them, and the held the right to interpret. Digitisation has changed much of this, although debates continue as to whether the medium of archiving alters the content. So this makes the archive, with all its politics, a component of the public sphere, at least theoretically. Hence these must be defended.

“viewing imagery of body horror may be rendered as unable to sustain a moral dimension: either over-exposure produces ‘compassion fatigue’ … or looking involves pleasure and is thus pornographic.”

Desensitisation is a risk that all atrocity archives run when they pile on evidence, of various kinds, of man’s inhumanity to man. That said, there cannot be a moral argument that calls for a shut-down of such archives because they ostensibly desensitise.

The atrocity archives are essential because in viewing them responsibly, we do not do what the perpetrators whose acts produced the archives did: erase the individual from life and memory. In viewing them in the form of their visual representations, we offer at least a nominal dignity which in their lives and death, they never possessed.

In viewing them, whether patients dying due to lack of oxygen or those whose photographing was immediately followed by their murder, we acknowledge again that contexts exist that produce death even when the photographs themselves do not depict the context directly. That is, the photograph is not the end-point of our viewing: the photographic archive gestures implicitly at the universe in which such horrors could be perpetuated, and archives kept.

It could be argued that by refusing to engage with astonishing acts of horror such as the Napalm girl, the Khmer Rouge victims, the Congo-Senegalese amputees, one is labouring under the myth of distance (‘it happens elsewhere’) – a myth which the pandemic has effectively dismantled by revealing horrors in our immediate cognitive vicinity – and the myth of innocence (‘oh it was like that, was it?’). The argument that atrocity archives desensitise and/or titillate is based on a rather naïve view that in the absence of such archives, humanity remains untouched by the events around. So it is not that these atrocity exhibits alone are instrumental in the loss of innocence.

Atrocity archives are a key component of both public space and public memory. They exist because specific contexts produced injuries, humiliation and death. The photographs are not the culprit nor the corrupting influence: the contexts and perpetrators that produced the bodies in the photographs are.

The atrocity archives exist because the people in them do not.