Did the lights go out on the Russian Revolution with Lenin’s passing on January 21, 1924? How did the dying man see it himself?

Vladimir Ilyich Lenin in the summer of 1923, six months before his death.

Victor Serge was on a train in Austria when the news of Vladimir Lenin’s death reached him. It had been snowing endlessly on a late January day in 1924. Years later, Serge was to write about it in his Memoirs of a Revolutionary:

The train bumped out of tunnels into vast landscapes on a mountain glittering with snow, where sombre armies of firs made a sudden descent. In this compartment full of fat, stodgy men, someone opened a newspaper and I saw: Death of Lenin. Then these men talked about the death, showing that they felt that someone unique and very great had passed. I looked at their faces, folk from another world, Austrian petit bourgeois closed to all new ideas – and Lenin was there, too, before my eyes, his hands open in the familiar gesture of demonstration, hunching a little towards the audience, marshalling the historical evidence, with his great forehead and the smile of a man who was sure of the truth, sure of himself. Together with a few others, this man had endowed an immense movement of faltering masses with a political consciousness that was supremely clear and resolute. Even when favourable social conditions are granted, such a human achievement is rare, unique, irreplaceable at the time of its happening. Without it, the minds of those who marched would have been several degrees dimmer, the chances of chaos, and of defeat amid chaos, immeasurably greater; for a degree of consciousness, once lost, can never be measured.

Serge was very far from being a Soviet iconographer of the Stalin era, much less a Lenin epigone. An avowed anarchist who had thrown in his lot with the Bolsheviks in 1919 only because he believed the Revolution needed to be saved for the sake of world revolution, he had been a bitter critic of many things that Lenin’s party had done post 1917.

In fact, in the same Memoirs, he devoted an entire chapter of some 50 pages (‘Danger from Within, 1920-21’) to tracing the rise of totalitarianism in Bolshevik practice, mocking Lenin’s liberal use of the word ‘democracy’ even as Lenin seemed to justify a variant of Bonapartism in how he himself functioned.

It was, indeed, Victor Serge who first used the word ‘totalitarianism’ in the context of Bolshevism. Hounded out of the Soviet Union, he died in 1947 in Mexico City – stateless, penniless and heartbroken.

Also read: Leon Trotsky, the Socialist Who Dreamt of the Full Human Life Even at His Nadir

But Lenin had been ill for many months before his death on January 21, 1924, though Soviet authorities spared no effort to keep this a secret. Banished out of Russia on a Comintern ‘assignment’ to western Europe, Victor Serge knew precious little, till he was warned about Lenin’s crippling illness sometime in the summer of 1923 by Andres Nin, the secretary of the Red International of Trade Unions, who was passing through Vienna then (and who himself would be liquidated by Stalinists in course of the Spanish Civil War).

Lenin had suffered his first stroke in May 1922, was unable to speak or move the right side of his body for weeks, recovered somewhat by August, resumed his normal duties, but was laid low again by a devastating second stroke in December, 1922. This time his body, horribly overworked through decades of excruciatingly demanding organisational and theoretical work – much of the time in exile or in hiding or as a fugitive from the Czar’s gendarmes – extracted a much bigger price from him: the right side of his body was paralysed, he lost his speech and was unable to hold the pen any more.

His mind still worked with relentless clarity – as we shall soon see –but he had no power to express himself or do any work. Slowly and painfully, Lenin fought back, learnt how to write a little with his left hand, and managed to stutter out a few words with difficulty. Nin told Serge how, when he was a little better, Lenin wished to see the Kremlin again, and his office with its worktable and telephones. Once taken there

“(y)ou can see him, leaning on Nadezhda Konstantinova (Krupskaya) and Nikolai Ivanovich (Bukharin), dragging his feet weakly across his sudy, gazing, terrified in case he will no longer understand it, at the map on the wall, taking pencils between his fingers  to make a rough signature, all like in a  dream , like a despairing old man in his second childhood. Bukharin often visits him in his country house, the one that belongs to Gorky. Bukharin makes merry in his company, and then hides behind a bush looking at him with tear-dimmed eyes. …..It’s definitely the end, my friend.”

It is not difficult to know what was pushing Lenin inexorably to his death. Five years at the helm of a country that had been turned upside down by war, revolution, famine, foreign invasion, epidemics and a crippling Civil War would have taken their toll on any human being, however tough he was built, however super-human his mental resilience.

Those five years saw some of the most uplifting moments in the history of the 20th century, but also some of its bleakest, most dispiriting ones. There was the unremitting violence of the White Armies in the Crimea and the Soviet Far East during 1918-21, the humongous peasant rebellions of the same period, and the sombre tragedy of the Kronstadt uprising which, because it pitted the Revolution against itself in a very real sense, devastated large sections of the Bolshevik rank and file morally.

During those five years, the fate of October hung by only a very slender thread, and no one knew this better than Lenin, whose astringent realism was second only to his inexhaustible optimism. And Lenin’s five years in a position of power were preceded by the 25 years he was obliged to live as an outlaw, an underground fighter, a political prisoner and an exile, very often in straitened circumstances. He was organising, writing, explaining, pleading and fighting bitter internecine battles inside European and Russian social democracy, battles that left indelible scars on his highly sensitive mind – and on his body.

Then, from August 1918 onwards, he carried inside this body two bullets that were meant to kill him (but failed) – one had lodged in his collarbone after puncturing his lungs while the other got caught in the base of his neck. Both proved intractable to surgical intervention, and both continued to seep lead toxicity into his system for the rest of his life. It fell to the lot of few men to receive so many bruising blows from life.

But Lenin always knew what he was bargaining  for when he entered upon the life of a professional revolutionary under a brutal autocracy. He used to joke that a revolutionary needed to die before he turned 50, for after that he would be a spent force.

In sheer will-power, too, Lenin had no parallel. And yet, when the time came for him, he felt crushed by the knowledge that he was dying. There is a photograph of him in a wheelchair, a frozen, but piercing stare in his eyes, as he is flanked by Anna Ilyinichna (his youngest sister) and by A.M. Kozhenikov, one of his doctors. The photo, taken in the summer of 1923 after he had suffered his third stroke that left him a hopeless cripple, seems to suggest a spirit in torment, a man unable to come to terms with the approaching end. Was this an only too human frailty, or something more than that?

Also read: Year One of the October Revolution, One Hundred Years On

To answer this question, we need to take a look at what was unfolding around the sick man, steadily and surely. Lenin had spearheaded a revolution that aimed at ultimately creating a classless, stateless human society where man was free to live a life of dignity and material prosperity in brotherhood with other men. The transition to such a society, Lenin as much as all Marxists knew, would necessarily be a slow –painfully slow, given the isolation of the Russian Revolution in a sea of utter hostility – process during which a workers’ state would be in charge.

In the event, the Russian state became a  ‘dictatorship of the proletariat’, buttressed by a powerful standing army and an awe-inspiring political police. All freedoms had to be curtailed, sometimes to be dispensed with altogether. The single-party system took shape. “What was to have been a mere para-state was in fact (now) a super-state,” as Isaac Deutscher summed it up memorably. 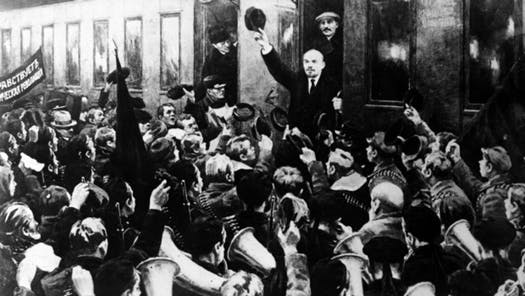 In the rush of the first post-revolution years, Lenin not only went along with these profound changes in the Bolshevik schema, he contemplated them with something approaching a calm conscience, because he was convinced that the retreat from his original principles was forced upon him by the overwhelming pressure of circumstances. Counter-revolution had to be put down, order had to be restored to a country in complete chaos, a devastated economy had to be rebuilt from scratch, and social disintegration had to be addressed in earnest.

Democracy, even a workers’ democracy, was sadly unequal to this task, especially as the working class itself was exhausted and demoralised. This knowledge gave Lenin the self-confidence necessary to make the formidable demands that he made upon himself, his comrades, and the -arty. His moral sense remained untroubled throughout this traumatic period.

And then, when debilitating illness gave him a pause, his self-confidence seemed to suddenly abandon him. Self-doubt, even remorse, assailed him. A stricken mind inside a stricken body would give him no rest. He was destined now to grapple with terrible misgivings for the rest of his days. The frigid, frightened look on his face in the photograph from the summer of 1923 mirrors the tumult in his soul.

But that is a story to be told another day.

Anjan Basu freelances as a literary critic, commentator and translator. He is based out of Bangalore and can be reached at basuanjan52@gmail.com.