Preserved in Letters: Real-Time Accounts of Archaeological Discoveries in the 19th Century

An excerpt from Upinder Singh's 'The World of India’s First Archaeologist: Letters from Alexander Cunningham to J. D. M. Beglar'. 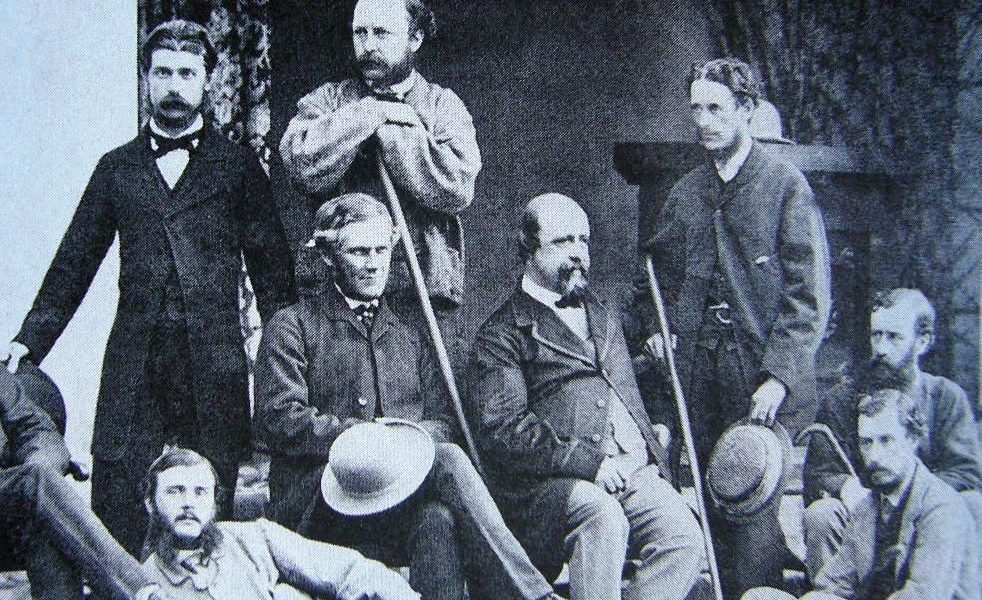 Alexander Cunningham (fourth from the right), who founded what later became the Archaeological Survey of India. Photo: Wikimedia Commons

Excerpted with permission from The World of India’s First Archaeologist: Letters from Alexander Cunningham to J.D.M. Beglar by Upinder Singh.

Given the enormous area to be covered and the limited manpower, the expeditions were planned assiduously on the basis of careful assessments of the areas likely to yield the most valuable results. The archaeologists did not blindly follow in the footsteps of the Chinese monks Faxian and Xuanzang, as is often imagined. Xuanzang’s account was, of course, important for certain sites, for instance, Bodh Gaya. Both monks are mentioned in the discussion of Rajgir, but with reference to the location of the Sattapani cave, Cunningham remarked that ‘the curiously absurd descriptions of the Chinese pilgrims leave us without any really precise information’. So he was neither incredulous nor uncritical.

Routes and itineraries were carefully drawn up on the basis of gaps in existing documentation and areas of maximum potential. Beglar’s routes [J. D. M. Beglar was Cunningham’s Archaeological Assistant] were especially designed to take him to places which required photographic documentation. Cunningham worked out where they could meet on their tours in order to confer and collaborate. Several letters talk about the need to procure detailed maps of known and unfamiliar areas, and the importance of including maps in the Archaeological Survey Reports. But judging from the way in which Cunningham detailed places, routes, and distances, it is evident that he had many a map in his head.

Since both men travelled a great deal, they had to anticipate each other’s movements and make calculations before deciding the addresses to which they should send their letters. Different modes of transfer are mentioned—overland mail, packet post, Bangly, Bangly Dak, registered post, Tongha Dak, and bullock train. Sometimes letters reached their destination after the recipient had left; sometimes they got lost in transit. The telegraph is first mentioned in early 1877 and references increase thereafter. 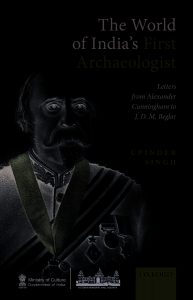 The most remarkable thing about the letters is that they describe the archaeological discoveries—several of major historical importance—as they were made, in real time. They provide direct access to the first impressions of sites, the ruminations over their import, the breakthroughs. Writing in the autumn of 1875, he announced:

“I have got a proof that Pâṭaliputra was on the Son! Therefore the Son was the Erannoboas of the Greeks, as I have always told you.” (Letter no. 43)

“I spent 3 days at Râjgir—where I discovered several new caves— two of which are close to our so called Sattapanni cave … my men reached your cave from the upper side first—! Just above it there are two real caves upwards of 70 feet long each—but they have never been inhabited except by bears.” (Letter no. 52)

“I found only one sculpture of any value. This is however a really valuable one—a group of Herakles killing the Nemean Lion! I have the sculpture with me now. It is more than 3 feet high—I found it forming the side of a trough for bullocks to drink out of and covered with a bit of wall of bricks & mud. Before I recognized the subject I noticed the artistic merit of the sculpture. I intend to have it photographed at Simla by Craddock.” (Letter no. 155)

In one letter, Cunningham wrote about the discoveries of the Buddhist stupa and gandhakuti (temple) at Shravasti, in another about the discovery at Sankissa of the pedestal of the Ashokan elephant capital. The discoveries at Sultanganj in 1880 unfold over several letters written in March and April 1880. Initially Beglar found nothing; then he discovered a stupa, and later some relics inside the stupa. Cunningham was excited and told him to send him the relics: ‘I wish to see them and sketch them.’ The Ceylon High Priest wanted the bone relic.

“I suppose he will dub it as a relic of Buddha, and make the people of Ceylon bow down to it!” (Letter no. 167)

The letters transport the reader into the hustle and bustle of the archaeological expeditions. Cunningham often travelled on horseback or elephant. The elephant, camels, and attendants had to be sent off in advance. Getting the baggage packed, weighed, and loaded onto the train’s baggage wagon was a major operation. Sometimes the baggage would arrive at the site well after Cunningham had reached; sometimes he realized too late that he had forgotten to pack an important item, for instance, paper. There are references to ‘khalassies’ and servants in the entourage. Locating and hiring camels was a continuing problem; camel men were unreliable and there was endless haggling over rates. References to the railway begin in 1874, but the mention of camels and elephants continue. There were other modes of transport such as bullock trains, carriage dak, carts, tongas, carriages, and phaetons. In October 1875, Carlleyle [Cunninghm’s second Archaeological Assistant] was thrown from his dog cart (apparently this had happened on more than one occasion), causing him serious and permanent arm injury.

“The Son is full of water and the crossing is difficult and very tedious owing to the subsidence and breaking of parts of the causeway. My elephant forded the river—and so did my camels, without their loads.” (Letter no. 50)

There were occasional accidents. Writing from Shekohabad in February 1877, Cunningham reported:

“All my Books in Nos. 3 & 4 Boxes are destroyed—The Camel sat down in the middle of the Ahsin River with them—& nearly killed my cook also.” (Letter no. 78)

There were encounters with elephants and leopards. Sometimes there was death on the march. In January 1882, a member of the team named Gohar Khan suddenly fell ill and died.

The expeditions required buying equipment such as ropes and pegs; arranging for tents; and collecting provisions and food such as bread, meat, butter, and tea for camp. Writing from Sankargarh on 18 December 1874 and discussing where they could meet, Cunningham told Beglar that they should shift base to Uchera,‘where the water is good, provisions are plentiful—and there is both a Railway Station and a Post Office’ (Letter no. 23). There were the expected occupational hazards. In February 1875, he wrote from Bhilsa,

“Here I am outside the Dâk Bungalow, which has a broken roof, and is besides full of wasps.” (Letter no. 34)

The weather is a regular refrain.

“Wind furious—3 weeks before its time. I forded the Son easily—only knee deep.” (Letter no. 139)

It is the heat that is mentioned most often:

“The heat came on suddenly at the end of February. I managed to carry on until I got to Uchera … I went to Allahabad by Rail, and was devoured by musquitoes [sic ] while waiting for money.” (Letter no. 36)

Cunningham found the heat debilitating and exhausting. Calcutta was too hot for him. In February 1882, he told Beglar that he found the Calcutta heat unbearable: ‘I am now melting away very fast. I shall be very glad to get out of this Purgatory’ (Letter no. 154). Whenever possible, he retreated to the cool climes of Simla…

Money and accounts run like regular threads through the letters. Cunningham sent frequent pleas to his Assistants for bills, vouchers, and receipts, and admonished them to be careful with money. Bureaucratic errors and delays were sources of exasperation, as were the obduracy of the Comptroller General and inefficiency of the ‘Red Tapists of the Treasury’. Money was sent to the archaeologists in the field through cash, money order, or cheque. Beglar frequently ran out of money and wrote for more; sometimes there was none to be had. Apart from the money needed for official archaeological work, Beglar had personal financial problems. He was keen on a pay hike, failing which he was on the lookout for a better-paying job….

Apart from the weather, money, and accounting, what stands out in the letters is how the archaeological work was carried out in the midst of frequent illness. Beglar was a sickly man, prone to fever and headaches, and Cunningham regularly made solicitous inquiries about his health…There is frequent advice.

“I am afraid you have been exposing yourself too much to the Sun. You should have a greater respect for the power of the Sun, and should always have some pills at hand to cool the system—as well as quinine to keep off fever. I remember that you used to expose yourself bareheaded to the Sun at Bharhut in the most daring way—enough to provoke the wrath of Sûrya.” (Letter no. 57)

…In fact, several letters reveal that during the most productive years of his life, Cunningham was afflicted by debilitating physical ailments. In June 1878, he had much to write about, but had neither time nor ability as he was ‘crippled with rheumatism’. He had lumbago and could not sit up without pain; he planned to treat it with hot water applications followed by camphor and brandy rubbing…On 26 April 1880, he wrote:

“My knee is getting stronger, but it is a slow process. I can sleep on my right side, and can get about with one crutch—so that I am tolerably independent. But I have a nasty attack of diarrhea, which worries me. I will set to work on Hwen Thsang for you inspite of all discomforts.” (Letter no. 127)

The discoveries made by Beglar at Mahabodhi in 1881 excited Cunningham enormously and he longed to see them for himself.

“Your discoveries in the interior are very curious; and I only wish I could climb up to see the inside. But my right angle [ sic ] has swollen very much of late—and is now bandaged up—and I am rather lamish.” (Letter no. 146)

The punishing routine also led to exhaustion, especially as he grew older. This did not, however, dim his strong sense of purpose or his enthusiasm for his work.