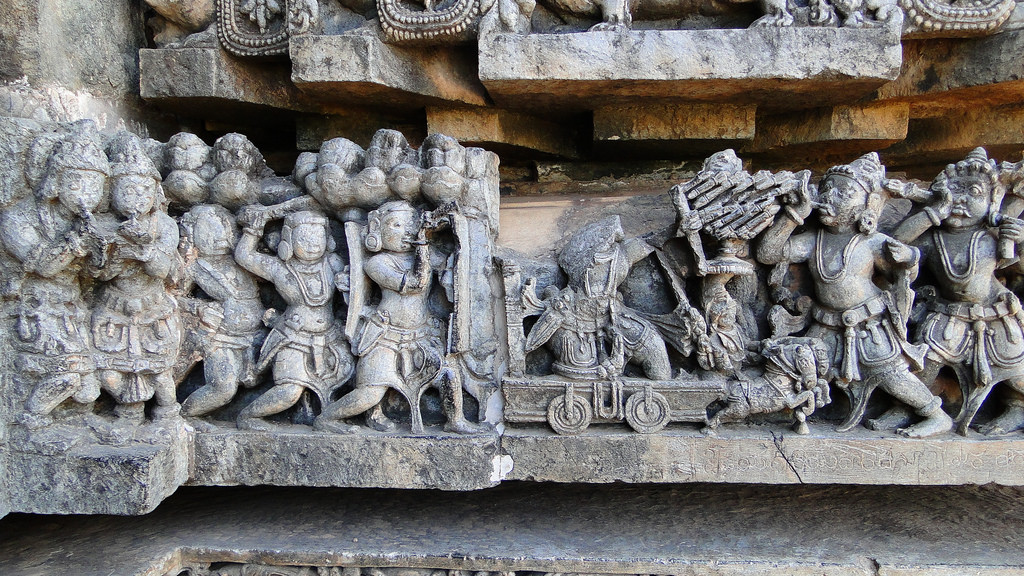 A scene from the Mahabharata war depicted at the Halebidu temple in Karnataka. Credit: Ankur P/Flickr CC BY-SA 2.0

In an email interview with Monobina Gupta, historian Upinder Singh talks about her latest book Political Violence in Ancient India.

A professor in the department of history at Delhi University, Singh discusses a range of issues related to political violence that her book has drawn attention to, issues that resonate in contemporary India. For instance, the scholar dwells on the relationship between the political ideologies of violence existing from ancient to contemporary times, and the troubled interface between the state and forest dwellers. Last but not least, how even the officially proclaimed religions of peace like Buddhism and Jainism have been ambivalent over the use of political violence in their texts, how they have used the imagery and vocabulary of war in them.

The transformation of the brutality and violence of war into its justification and its celebration were important aspects of ancient India’s political ideology. How – if at all – has the ideology of political violence changed since ancient times?

The structure and ideologies of ancient monarchies and the modern Indian nation state are very different. A few fundamental issues remain the same, but they are addressed in different ways. All states have to mask, justify and legitimise their use of violence through some sort of ideology. The purpose of this ideology is to present the state’s violence as necessary force. In ancient times, the state presented this violence as necessary to uphold the kingdom. Today it is presented as necessary to uphold the nation.

Modern states are much more powerful than their ancient counterparts. They have many more effective powers of surveillance over subjects and much greater control over the instruments of force. They have far greater potential for violence and more sophisticated means to justify this violence and to manipulate public opinion.

Another difference is that ancient Indian thinkers were very conscious about the tension between the principle of nonviolence and the need for the state to indulge in a certain amount of violence. Re-engaging with this important debate requires two things – that we recognise political violence as a serious problem, and consider nonviolence as a desirable positive value in the political domain.

None of the ancient religions – Jainism, Buddhism, Brahmanism – proscribed war. Ashoka gave up warfare after the Kalinga battle. Yet he continued to issue warnings to tribal people, thereby distancing himself from absolute pacifism. Could you please elaborate on this ambivalence.

Jainism and Buddhism both emphasise nonviolence (Jainism much more so) as part of the way of life for the monastic community as well as laity. Brahmanism recognises nonviolence as a virtue, and as part of the samanya-dharma, that is the dharma that applies to everyone. But in Brahmanism, this dharma is not as important as the dharma of the varnas or the four hereditary social classes.

I expected to find a strong critique of war in the Buddhist and Jaina texts, but I instead, I found an ambivalence and a glossing over. I also found that Jainism and Buddhism use the vocabulary and imagery of war. Mahavira is a jina (victor); the Buddha fights a battle against the god Mara before attaining enlightenment, while sitting under the Bodhi tree.

The most powerful discussion of the problem of political violence, especially war, is in the Mahabharata. While the epic repeatedly refers to ahimsa as the highest dharma, Yudhishthira was obliged to fight against his relatives, friends and teachers because he was a Kshatriya; because, being the eldest, he was the rightful king; and because this was a dharma-yuddha, another episode between the age-old conflict between the gods and demons. Although many of the Mahabharata characters brood sorrowfully on the slaughter, the epic ultimately justifies a very bloody war. But along with way, it raises many important moral questions related to kingship, violence and war. 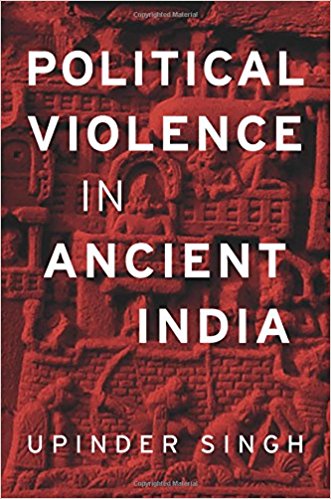 Ashoka is an unusual historical figure. He was deeply influenced by Buddhism, and the dhamma that he talks obsessively about in his inscriptions bears a strong Buddhist imprint, although it is not identical to Buddhism. Nonviolence is central to Ashoka’s dhamma. The 13th rock edict tells us about the Kalinga war and the great death and devastation it led to. It goes on to give a critique of war in general. The warning to the forest people in this anti-war inscription comes as a bit of a shock in, but it shows that although Ashoka was deeply committed to a nonviolence and pacifism, he was not willing to ignore challenges to his position as king and to the Maurya empire. The fact that the forest tribes are singled out for special mention indicates that they presented a major political problem for the Mauryas.

So while the Buddhist and Jaina texts, the Mahabharata and Ashoka’s inscriptions all talk about ahimsa in different ways and in different degrees, they all recognise that some amount of violence is necessary to rule a kingdom.

Interface between state and the wilderness was then marked by a great deal of violence. What were the reasons for this tension and conflict? We also see the continuity of the same culture in contemporary India. How do we understand and analyse this continuity?

The conflict between the state and the forest is one of the most important aspects of the political history of ancient India. The expansion of agriculture, cities and states involved the steady clearance of forests. But the really massive forest clearance happened in the middle of the 19th century with population increase, commercial farming and the expansion of the railways. Till then, states were always cheek by jowl with the forest tribes. Over the centuries, the forest was an object of the exploitation and violence of the state; but it was also a source of violent challenge to the state. Tribal chieftains often challenged the authority and expansionist plans of ambitious kings and this was a constant source of conflict. Also, forests contained valuable economic resources like wood and ivory; as well as military resources like elephants. Exploiting, extracting and controlling these resources meant constant clashes with the people who lived in the forest.

You have underlined four aspects of how forests were perceived and the function they served in ancient India. For instance, forests served as rich economic and military resource, a place of exile for political rivals, site of royal hunt and abode of the people posing a violent threat to the state. How has the imagination of the forest changed at various levels?

In my book, I have brought out the many ways in which the forest was imagined in ancient India. It was a paradisical place of exquisite natural beauty. It was a rich economic and military resource. It was home to robbers and troublesome tribal chiefs. It was dotted with ashramas of venerable Brahmin rishis. It was a place of exile and adventure for princes. It was a dangerous zone inhabited by fierce rakshasas. It was a space where kings showed off their great prowess by killing powerful wild animals.

The Ramayana is the text that presents the forest in the most positive light. Rama and Sita are described as living in harmony with nature in the forest, Rama has a close friendship with a Nishada chief named Guha, and the tribal woman Shabari shows great devotion towards Rama.

Kautilya was the ancient thinker who most astutely understood the close, reciprocal relationship between the state and the forest. The Arthashastra has a very detailed discussion of different types of forests and forest produce. Kautilya seems to be in favour of balanced exploitation of the forest resources by the state. In more recent times, the degradation of nature due to human interference has hugely increased, especially due to urbanisation, modernisation and the powerful economic lobbies that seek to exploit the forest for profit. Our conservation concerns and understanding of environmental issues are much more acute. Today we realise that we live in the midst of an environmental crisis, and this crisis is addressed in very different ways at the national and international levels.

A scene from the Mahabharata war depicted at the Halebidu temple in Karnataka. Credit: Ankur P/Flickr CC BY-SA 2.0

Your book sheds light on how ancient India sanctioned the use of violence against a king who did not protect his people and exploited them. Would it be correct to infer that such revolts may be clubbed under the rubric of revolution in modern times? The Maoist insurrection, for instance, could be one such example. How has the relationship between the ruler and the ruled changed from ancient times?

The Mahabharata states that a king who is evil, who does not protect his people and who taxes them unfairly should be killed by them as though he were a mad dog. The Arthashastra warns kings not to incur the anger of the people (prakriti-kopa). However, although the idea of a popular revolt is very much there in the ancient Indian texts, we do not have any evidence that such a revolt ever actually happened. Nor do we hear of large-scale revolutionary upheavals of the sort that we know of in modern world history.

The relationship between rulers and the ruled has changed a great deal between the days of the ancient Indian monarchies and our modern democracy. The modern nation state is based on ideas such as equality, freedom and liberty of the individual (at least in theory), which were never in the picture in ancient Indian texts, which took social inequality and hierarchy for granted. But there are some similarities, for instance, in the idea of the fundamental duties of the state, such as the protection of the people, ensuring their well-being and prosperity, the dispensing of justice and the maintenance of social order.

You have eloquently argued – “Does India possess the ability to recognize and confront the realities of her violent past and present, and carry forward the debate on political violence with the seriousness with which intellectuals initiated it over two thousand years ago.” What are the reasons contributing to the absence of such a theoretical framework on violence in contemporary India?

Perhaps the philosophers (where are they?) have let us down. But there are writers, thinkers, film makers who have been addressing the issue of violence, often by breaking it down into more specific issues and contexts – for instance, war, caste violence, violence against women, cruelty towards animals, communal violence, terrorism, insurgencies against the state, state instigation of violence and so on. What we certainly need today is a greater emphasis on understanding, confronting and challenging the violence of the state.