Ubaidullah, the Maulana Who Saw Socialism as Guarantor of Peoples' Welfare

Among his political initiatives were the formation of the short-lived Mahabharat Svarajia Party and Jamna Narbada Sind Sagar Party. Undated photograph from the 1920s of Ubaidullah (second from left) with Turkish officials in Istanbul.

The legendary crusader for Indian independence, Maulana Ubaidullah Sindhi, who passed away 74 years ago today, had travelled to Afghanistan in 1915 at the direction of his teacher, Sheikh al-Hind Maulana Mahmudul Hasan. There, Ubaidullah was one of the prime movers of the ‘reshmi rumal’ or ‘silk letters’ conspiracy to overthrow the British. As Mohammed Ayub Khan described it in a 2013 academic paper,

“Sindhi rose in prominence in India’s nationalist imagination for his role in the ‘Silk Letters Conspiracy.’ At the urging of Hasan he had written letters to the governor of Russian Turkistan and the Czar asking them to join forces with Turkey and declare war on the British. The letters provide minute details of the proposed organisational structure of an army called Hezbollah and how to recruit Indians for it. The letters were concealed in silk scarves to escape detection. However, they were found, and the British clamped down in India by passing the draconian Rowlatt Act limiting civil freedoms.”

Ubaidullah remained in Kabul for seven years, working closely with the revolutionaries who had formed a provisional independent government for India, as well as the Hindustan Ghadar Party, there before moving to Moscow along with many of his comrades in October 1922. 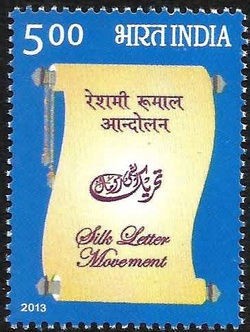 Indian postage stamp commemorating the Reshmi Rumal movement in which Ubaidallah was involved.

During his stay in Moscow, he keenly observed the principles of communism and the attempts to bring these principles to practice in the Soviet Union. When he reached Istanbul nine months later, he published a draft of a constitution for Free India in Urdu from Istanbul in 1924 which closely resembled the Soviet constitution in its economic character, emphasising peoples’ welfare, nationalisation, abolition of feudalism and landlordism. Ubaidullah understood socialist teachings to be directly in conformity with Islam.

He also formed a party, the Mahabharat Svarajia Party to advance the political programme his constitution envisaged.  The British confiscated copies of the document and Ubaidullah was forced to remain in exile – in Turkey, Italy and Arabia.

After his return to India in 1939, he continued expressing these views.

Tanvir Anjum quotes the words of Faruqi to the effect that “during his sojourn abroad his ‘Islamist’ approach to  Indian politics was transformed into ‘nationalist-secularist’. He had left India as a firebrand agitator and an organiser of revolutionary activities; he came back as a thinker.”

According to Khan, the Ubaidullah who returned home “devoted himself to resolving the Hindu-Muslim question by positing new ideas of a federal India, distinct from the ones presented by the Congress and the Muslim League. These ideas were first developed by him in 1926 and revised after his experiences in the Muslim world.” He formed a new party, the Jamna, Narbada, Sind Sagar Party, to take forward his views but it never really took off.

Also in this series:

In his preface to the ‘Constitution’ he wrote, the Maulana says while describing the impressions of Moscow:

‘We had the opportunity to witness the results of the Russian Revolution in Moscow with our eyes. Some members of our Committee learnt the Russian language in order to study the Revolution. We had good opportunities to exchange views with important persons of Russia. To study the influence of the Russian Revolution on other countries of Europe, our committee members went to these countries…(but) we feel this reality with sorrow that the present generation of our country has gone very far away from understanding the nature of the Revolution.’ Ubaidullah (seated) and fellow Ghadarite and revolutionary Teja Singh Azad, in an undated photograph, presumed to be from 1922. Credit: drroshanshaikh.wordpress.com

Arguing about the national problems of India, Ubaidullah said that:

‘Class complexity is present in every nation. The mutual struggle of the rich and labourer, landlord and peasant, capitalist and worker can easily divide every Indian nation into competitive and opposing ranks. That is why to resolve all Indian problems and especially Hindu-Muslim differences on purely religious basis cannot produce any permanent path to salvation. Therefore we do not deem religion to be the basis to resolve these problems in our programme, but present a solution to these problems on national and class division and economic and political principles.’

Maulana Sindhi was a great opponent of the capitalist system, so while arguing about the future of India in this document, he writes that:

‘By breaking the present capitalist system in our country, we establish the foundations of such a system which is the guarantor of the welfare of the working class meaning the majority and remains under the rule of this working class. Our independence movement can become certainly successful from this.’

‘India reduced its greatness to dust by overlooking the French Revolution. Now by shutting our eyes to this revolution (the Russian Revolution) of global importance, we do not want that India sign its own death warrant. Russia meets us just a few steps further from the place of meeting of the Himalayas, Karakoram and Hindu Kush. Our conclusive opinion is that if we give away all that we have achieved in the sixty years of this slavery and buy the friendship of the nations from the northern passes to the North Pole even while remaining hand-to-mouth, we will not be at a loss.’

Though a Deobandi and an avowed follower of Shah Walliullah, the 18th century Delhi theologian who is seen by scholars as the father of a rigid and puritanical Islam, Ubaidullah’s definition of Islam, according to Mohammad Khan, “was much more broad based than the one which is traditionally held”:

Similarly, his definition of kafir (generally translated as ‘unbelievers) was far more restrictive and altogether novel. In his exegesis of the Qur’an, Sindhi argued that the kafirs mentioned in Surah 2, v.4, actually represent ‘reactionary conservatives’. At another place he is reported as using the same term for those who want to divide people on the basis of religion, sect, and nation.

Ubaidullah was also a strong voice against separatism on the basis of religion. As Khan notes, he presented “a very unique idea of what it means to be an Indian” in a 1940 lecture, ‘What Do We Want?’:

“He said a true Indian is the one who strives the most to unite India. The Aryans were the first to give a united conception of India. This position was later on taken by Muslims. Therefore, Muslims are the ones who deserve to be called ‘Indians’ of the first order. In this scheme of things Mehmood of Ghazni and Aurangzeb, extremely divisive figures in Indian history and the Hindu imagination, become heroes for uniting India and stand shoulder to shoulder with Asoka and the earlier Aryans. The British can also be accorded the status of the ‘Indian of first order’ if they adopt India as their homeland, as the Muslims and Anglo-Indians have done.”

His last years were marked by a life of great simplicity. He remained an opponent of the country’s partition and a fighter against imperialism till his death in 1944.

Note: This is the third in a special five-part series paying tribute to the pioneers of Islamic socialism in the Indian subcontinent in the year marking the bicentennial of Karl Marx. The first was on Maulana Hasrat Mohani and the second on Maulvi Barkatullah.

Raza Naeem is a Pakistani social scientist, book critic, and an award-winning translator and dramatic reader currently teaching in Lahore. He is also the president of the Progressive Writers Association in Lahore. His most recent work is an introduction to the reissued edition (HarperCollins India, 2016) of Abdullah Hussein’s classic novel The Weary Generations. He can be reached at: razanaeem@hotmail.com