The Time Machine: 9/11 and the Space Between Grief and Analysis

This week, the Time Machine looks at how in the aftermath of 9/11, the narrative of grief was appropriated into one of patriotic vengeance. 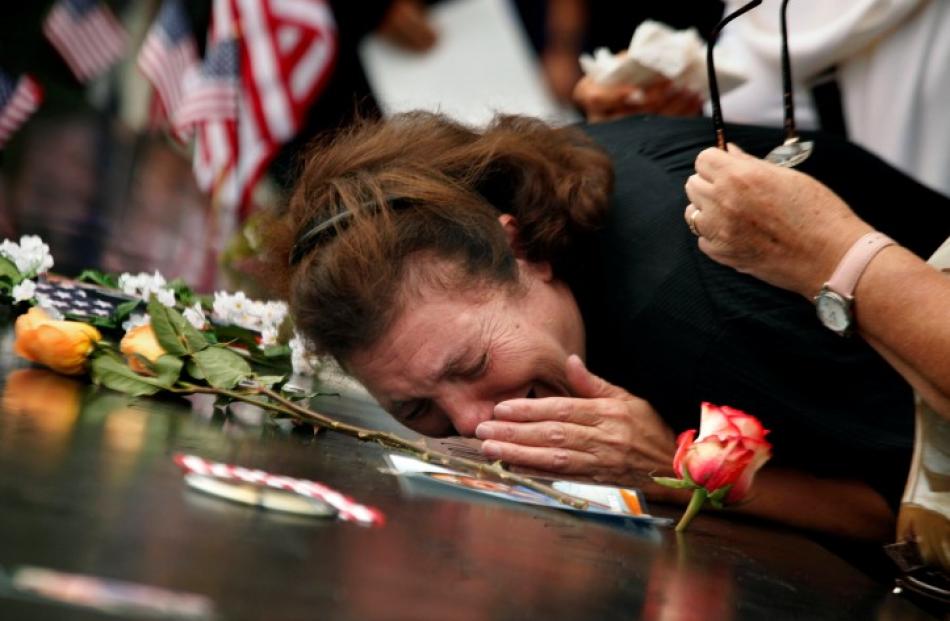 A woman mourns her son who was killed in the 9/11 attacks. Credit: Reuters

On September 11, 2001, millions of people must have called each other around the world in shock as they saw smoke billowing out of the twin towers on their television screens. My own memory of the event began similarly with a phone call someone made to my father, after which we watched horrific footage of the towers collapsing. I was far too young at the time to even remotely understand what the crumbling buildings meant. All I remember is that disbelief was a sentiment that was expressed often. How could this be possible?

In the aftermath of 9/11, disbelief is a word that recurs very often in the accounts of eyewitnesses and survivors. “The horror arrived in episodic bursts of chilling disbelief, signified first by trembling floors, sharp eruptions, cracked windows,” a New York Times report the day after said.

The writer John Updike, who in those fateful moments had watched the unfolding catastrophe with his wife from a rooftop in Brooklyn, later wrote in the New Yorker:

“…this was not quite real; it could be fixed; the technocracy the towers symbolized would find a way to put out the fire and reverse the damage.”

Writing about 9/11 is not easy. The over-abundance of reportage, footage, opinions, sentiments and stories make for a sensory overload of intertwined narratives that are difficult to disentangle. “The accepted versions didn’t make sense for me,” said Jonathan Safran Foer, the author of the novel Extremely Loud, Incredibly Close. Foer tells the story of a boy who lost his father to the attack. Like millions of others, Foer too was alerted by a phone call on September 11, and as a New Yorker, described his experience as that of “profound sadness.”

Grief is the foremost element that jumps out of public discourse in the aftermath of 9/11. Mourning families told journalists about last phone calls, emails and voice messages. There are stories of bravery, of composure and of resignation. Sean Rooney, who was trapped in one of the towers, had tried to reach the roof, hoping that it might save his life. When that proved to be a dead end, he called his wife Beverly Eckert, who later told the New York Times, “The belief that they had a rooftop option cost them their lives.”  Others called to tell their loved ones where the insurance papers were kept and still others called to simply say goodbye. A decade later, in 2011, in an article titled ‘Speechless’, Foer wrote:

“Is there anyone who hasn’t played out the nightmare of having been trapped in one of the towers? Is there anyone who hasn’t wondered if he would have had the superhuman composure to call and comfort a loved one? Dozens of phone calls home were placed from the towers between the moment that the first plane hit and the time that the north tower collapsed. When words should have been most impossible to find, there were words of grace, and dignity, and consolation.”

And this is perhaps the most terrifying thing – thousands of people trapped and forced to confront the knowledge of certain death while having to wait for it.

There were those who did not, or could not wait. The jumpers. Survivors from the South Tower recall being puzzled by office paper floating down from the sky, along with burning debris. And the people on the streets were horrified as they saw people jumping out of the upper floors of the towers.

One woman from Sydney, who was at her hotel room directly across from the towers, wrote:

“People were throwing whatever they could out of the windows – tables, water coolers etc – to break the glass and get air. I could see them hanging out of windows, then to my horror I realised people were beginning to jump to their death rather than being burned alive. What a terrible choice to have to make.”

Hundreds are supposed to have jumped. But one photograph, ‘The Falling Man’, taken by Associated Press photographer Richard Drew would distil the complexity of the narratives into one frame. While other photographs of people who jumped showed terror and indignity, ‘The Falling Man’ presented, in the words of Tom Junod, “something almost rebellious in the man’s posture, as though once faced with the inevitability of death, he decided to get on with it; as though he were a missile, a spear, bent on attaining his own end.”

The photograph invited a degree of controversy, raising questions about journalistic ethics on the one hand while leading to debates over the nature of innocence and victimhood on the other. The man in Drew’s photograph is not identifiable. He could be anyone, and as such, in that instant captured, tells several, sometimes conflicting stories. His is a story of bravery, but he is also a victim.

And as David Ryan has suggested, the narrative of victimhood was politically necessary, so that grief could grow into anger and demands of vengeance that would eventually justify the war on terror.

Historically, 9/11 represents an event that is widely considered worthy of epochal status. In an interview soon after the attack, Noam Chomsky said that the tables, or rather the guns, had turned – it was the “first time since the War of 1812 that the national territory has been under attack, or even threatened.” The shock and disbelief surrounding the attack was because of a realisation that the US was not invulnerable. Calling the wreckage in Manhattan reminiscent of Kabul, Jonathan Franzen wrote in the New Yorker, “In the space of two hours, we left behind a happy era of Game Boy economics and trophy houses and entered a world of fear and vengeance.”

On September 12, the headline of the New York Times read, US ATTACKED; President Vows to Exact Punishment for ‘Evil’. President George W. Bush had a calamity on his hands. Addressing the press, he vowed to “make no distinction between the terrorists who committed these acts and those who harbour them”. 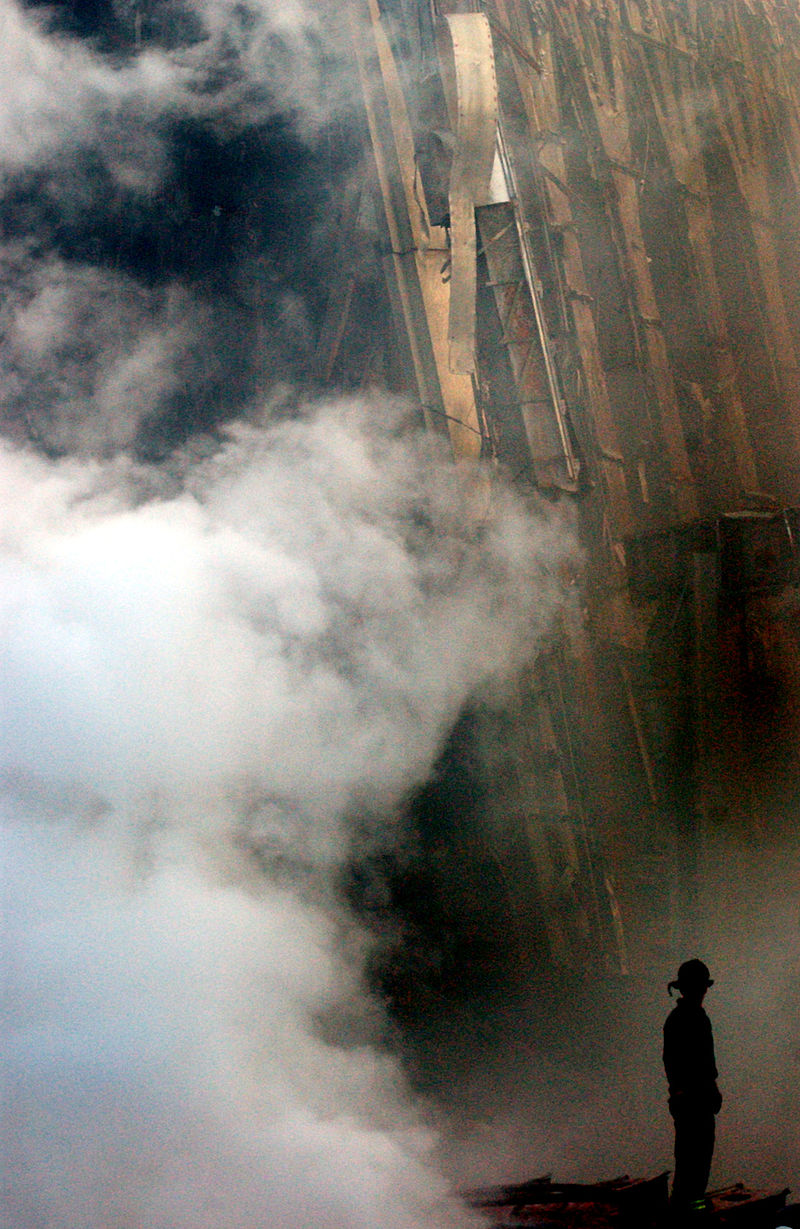 A solitary firefighter stands amid the rubble and smoke in New York City. Credit: Wikimedia Commons

Interestingly, Chomsky had pointed out at the time that war was not the only option – there were other legal means of recourse that he cited from recent history (such as the Oklahoma City bombing) that did not demand the loss of more innocent lives. These facts he had said, could not be repeated enough, and had “been completely removed from history. One has to practically scream them from the rooftops.”

But as early as September 12, across the Atlantic, The Guardian’s front page carried a large spread of the burning towers, with the headline, ‘A Declaration of War’. When asked about media coverage at the time, Chomsky had to admit that “there has, so far, been a solid drumbeat of calls for violent reaction.”

But more importantly, he also stressed that the question that wasn’t being asked was ‘why?’

This was a sentiment shared by Michelle Fine, a professor of social psychology who lived in New York. She wrote:

“Since September 11, mainstream media have covered – albeit partially – who, what, how, where, and when (at least when “they” attacked, less so when “we” did). The coverage, however, rarely enters the dangerous territory of why. Why us, why now, why those buildings, why the mass hatred? Why terrorism, why mass destruction, why this form of international assault?”

The question of why gets easily subsumed when a narrative of grief is quickly appropriated into a narrative of patriotic vengeance. To introspect and critique and ask why is to walk on a tightrope. It invites scorn, accusations of treachery and allegations of disrespect for the dead. Consequently, as Chomsky said, “it is entirely typical for the major media, and the intellectual classes generally, to line up in support of power at a time of crises and try to mobilise the population” to manufacture consent.

The need for a complex public discourse was recognised. Intent on retelling 9/11 more humanely, Foer had said, “We need as many voices as possible because unfortunately our national storytellers about [9/11] have been politicians and they’ve been telling a story so different than most people I know experienced the day.” On another occasion, he expressed his distress over how 9/11 was a story that was told in absolutes, reduced to absolute good versus absolute evil, shorn of history and context.

In that regard, Fine’s narrative of her experience is remarkable in the gentle sympathy and self-reflection it combines. On September 12, she wrote:

“Comforted and humiliated by loving e-mails from friends in Northern Ireland, Gaza, Australia, Israel, and New Zealand, I recognize that, of course, I don’t e-mail them every time a bomb goes off in their country. How much do I/we collude in the imperial calculus of whose body/whose tragedy/whose land counts more?”

As she narrates her sense of loss, there is a vulnerability that turns quickly to resilient defiance when she writes:

“To raise questions about the horrors of terrorism and U.S. imperialism in the same breath morphs into a betrayal of patriotism, a disregard for those who sacrificed life. Many work to separate grief and critique, as though we can’t mourn as we consider critically what the U.S. might have done to contribute to the mass hatred that surrounds.”

The inability to separate grief from critique is perhaps the reason that hate crimes against Muslims jumped from 28 in the year 2000 to 481 in 2001. Several reports since 9/11 have discussed how Islamophobia grew in the wake of the attacks. Even those perceived to be Arab were the victims of hate crimes while an Indian shopkeeper was forced to put up a sign explaining his ethnicity soon after 9/11, so as not to scare customers.

The repercussions are still being suffered, most recently, with Donald Trump’s controversial travel ban.