The Empire Strikes Back: Ad Hominem as History

The authors of a recent article sought to counter my views by falsely attributing political and ideological motives. 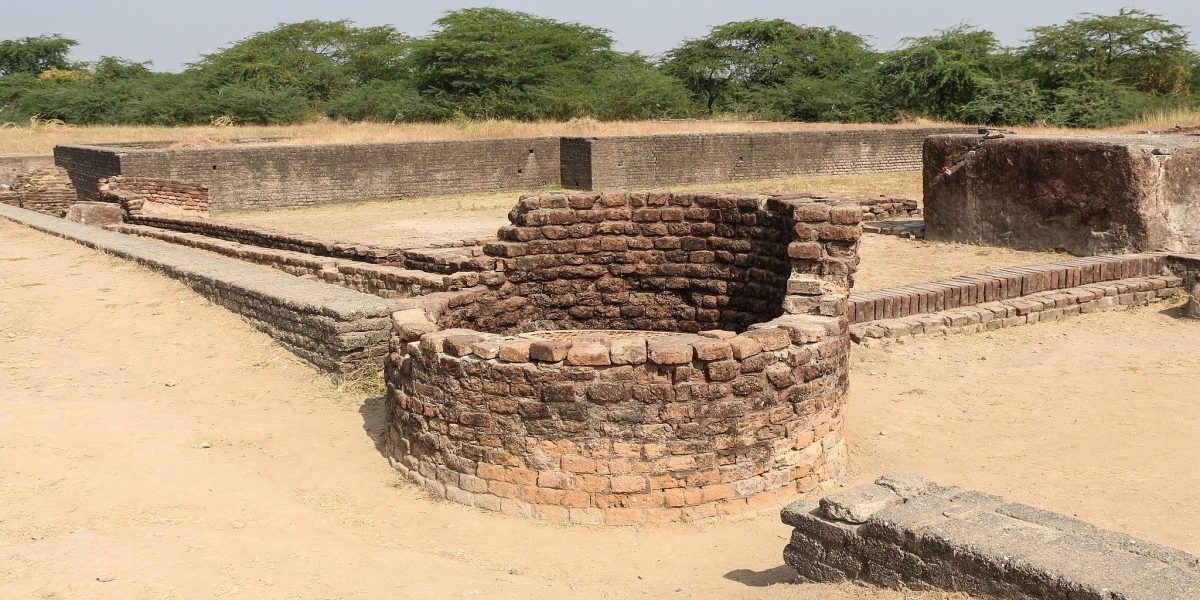 An ancient well, and the city drainage canals, in the upper town of the site of Lothal, India. Photo: Bernard Gagnon/CC BY-SA I am forced to write this piece in response to the malicious personal attack on my professional integrity and academic competence by Malavika Kasturi and Mekhola Gomes in The Wire on August 17, 2020.

Kasturi and Gomes’s article, titled ‘To Say that An Indian Nation-State existed in the Ancient Past is Historical Manipulation’, attacks an article written by me in The New Indian Express on August 14, 2020, titled ‘The Idea of India: A Historical Corrective’, without pointing out any factual inaccuracy. Instead, they sought to counter my views by falsely attributing political and ideological motives.

In my piece, I presented four concrete historical testimonies on an idea of India from ancient times. There are several more from other parts of Indian history but severe limitations of space in a daily newspaper column confined the choice to just some of the early references. In response, however, the authors, clearly unable to refute the veracity and accuracy of a single one of these pieces of evidence, dived into a pure ad hominem attack.

They fabricated and planted falsehoods, flagrantly twisted the content, thrust a connection with cultural and political outfits to which only they seem to be privy – neither I nor the outfits concerned, I imagine – and went on to pass judgment on a two decade long, nationally and internationally acclaimed career in scholarship, declaring it multiple times as “shoddy”, “poor”, “crude”, “ugly” and, in a fascinating instance of projection, nothing but “propaganda”.

Below is a point-by-point exposé of this unfortunate, barely veiled personal attack masquerading as an academic rejoinder. To be clear, this exposé is important also because it points to a larger malaise and diabolical method in some academic circles where independent scholarship is sought to be viciously suppressed and discredited by camps and coteries.

1. In the first line of para 5 of the print edition, my article ‘The Idea of India’ clearly distinguishes between a nation-state and a nation, a distinction that is well established in the disciplines of history as much as geography and political science. Accordingly, my article speaks only of the concept of nation, which it unambiguously defines as a notion consisting of a jointly held sense of belonging to a common territorial and cultural entity, and goes on to demonstrate concrete examples of such an understanding of India in history.

There is no mention of a premodern Indian state or nation-state whatsoever in my article, nor any claim to complete identity with modern boundaries. But Kasturi and Gomes flagrantly falsify this by writing more than once, including in the title to their piece, that I claim “the nation-state of India” existed in premodern times! This is desperate distortion and manipulation of the truth.

2. None of the four historical testimonies I give invokes any religion as a part of their definition of India, let alone Hinduism. But the two authors merrily read “a Hindu nation” into my article and indeed into these texts. The Mahabharata and the Vishnu Purana verses that I quoted clearly cite geographic and ethnic criteria, nothing else; Xuan Zang’s testimony on what is India (‘Indu’) is a Buddhist’s statement, not a Hindu’s; and not only is Shankara’s advaita trans-sectarian, but my article enumerated some of the recognisably Hindu schools such as Vedic Mimamsakas, Vaishnavas and Shaivas that Shankara worsted in intellectual debate! Where is “a Hindu nation” in all this? Perhaps only in the imagination of the two authors.

Yet they base their delusions of a particular cultural-political basis to my article on this piece of concoction. As it so happens, Diana Eck, the Harvard scholar of religion, in her 2011 book India: A Sacred Geography, citing the Puranas, argued for a nation forged by all-India pilgrimage networks and by the praxis of millions of pilgrims moving instinctively along these over the centuries.

Sheldon Pollock, the Sanskritist from Columbia, in his 2006 Language of the Gods in the World of Men, cites the same texts my article does, including the Mahabharata’s definition of Bharatavarsha and the Vishnu Purana’s, along with the sixth century Brhat Samhita’s definition. He also cites the internal diversity of India, which my article does too. And he concludes: “there is nothing remarkable about the people in premodern South Asia having a clear and accurate conception of the spatial organization of their world” (pp. 194-196).

Now, according to the authors of The Wire article, were both Eck and Pollock also perhaps responding to Mohan Bhagwat’s alleged “call for revitalizing Hinduism… and historical ‘correctives’”?

But no! This particular political label is reserved only for those select Indians who dare to be independent scholars and not fall in line with camps and diktats. It is a handy weapon in some circles of Indian academia today and a convenient substitute for the painstaking task of genuine intellectual engagement with an open mind.

3. A further nail in the coffin of this unfounded accusation against my article of rendering a politically inspired “Hindu nation” is the evidence from later centuries. Al-biruni, the 11th century Arab traveller, in his Kitab ul Hind describes India (‘Al Hind’) thus: “Limited in the South by the above mentioned Indian Ocean, and on all three other sides by the lofty mountains, the waters of which flow down to it”. He goes on to say: the inhabitable world extending southwards from Himavant is Bharatvarsha, which is the centre of Jambudvipa. The parts named and ascribed to it are located in Al Hind alone. (cited by Athar Ali, ‘The Evolution of the Perception of India’ in his Mughal India, p. 110)

Five centuries after him, the celebrated Mughal historian Abul Fazl in his Akbar Namah describes Hind or Hindustan as “the sea borders Hindustan on the east, west and south. In the north, the great mountain ranges separate India from Turan, Iran and China.”  He goes on to say: “Intelligent men of the past have considered Kabul and Qandahar as the twin gates of Hindustan… By guarding these two places, Hindustan obtains peace from the alien (raider) and global traffic by these two routes can prosper” (Athar Ali, ibid, p. 113-14). Note how the reference to Kabul also resonates with Xuan Zang’s testimony that I cited in my article.

Clearly, neither Al-biruni nor Abul Fazl were Hindu or out to envision “a Hindu nation”. Their understanding of India is nonetheless hardly distinguishable from what their forebears that I cited put out.

4. If anything, the main argument of my article, italicised as it was too, was that the ancient idea of India embraced this country’s vibrant diversity as a core tenet. And yet, the two authors go out of their way to vitiate and obliterate this argument by conjuring up the spectre of “a homogenous Hindu nation” in their ‘response’.

For this they also deliberately misinterpret the play on advaitic terminology in my use of the phrase “illusion of multiplicity” in Shankara’s context (illusion here a translation of māyā/samsāra), grossly misrepresenting it as some kind of denial of diversity, even when the clause just before it emphatically describes India as “a sphere peopled by great diversity of thought”. Why this blatant manipulation and distortion?

Also read: Ramayana Has Many Poems, Many Versions and Many Colours

In the same way, Kasturi and Gomes attempt to deny the historicity of Shankaracharya without giving even one, universally accepted historical reason for it. In effect, this breed of historiography seeks to dismiss rather than understand early medieval historical texts and, more importantly, strong local traditions of memory that identify with Shankara’s visits.

Their article also condemns me for writing about the idea of India on the eve of Independence Day. It is not clear since when this became a crime.

5. Nowhere does my original article claim an unchanging character to the Indian nation. Yet the authors rant about this at length, lamenting on the fly how a training in the hallowed Centre for Historical Studies, JNU (where I, incidentally, topped not just history but the social sciences as a student), and to which they themselves belonged, a fact they discreetly do not reveal, could have resulted in such an (imaginary) proposition. They also attempt to rope in B.D. Chattopadhyaya’s nuanced article (which I in fact prescribe and teach in my class) – only to cite from it, however, territorial concepts in the Vedas (janapada) to counter the evidence from the later Mahabharata etc.

And though it was not the concern of my article whether all the disparate testimonies I cite are identical in nature or not, the fact that there seems to be a great deal that continued to be held in common in the idea of India across the centuries by Hindus, Buddhists, Muslims, and by residents as well as foreign travellers, itself deserves to be explored rather than dismissed. The two authors’ fetishisation of unsubstantiated change and denial of traditions of continuity, that too in an ancient continuous living civilisation like India, represents impoverished and dated historiography at its best.

Thus, far from comprehending my article and the concepts and history it discusses, or providing a single counter fact that would actually hold, the two authors let loose their political, personal and professional attacks, which constitute neither academics nor journalism.

Any wonder then that The New Indian Express would have refused to go with such an unsubstantiated piece of personal vendetta, as the authors claim it did (in an Author’s Note which has subsequently mysteriously vanished from the platform)? It is unfortunate that The Wire did not know any better or pause to cross check with the original article. In a day and age of fake narratives, Kasturi and Gomes, and their cohorts, are of course welcome to disagree with Indian history, as they seem to, but, inconveniently for them, they cannot wish away or suppress that history simply because it does not suit their politics.