The Battle of Pollilur: Revisiting the Footnotes of History

A painting on the Battle of Pollilur has been sold in London for £630,000, as part of a Sotheby’s auction. The history of the painting serves as a metaphor for the violence that accompanied colonial expansionism. 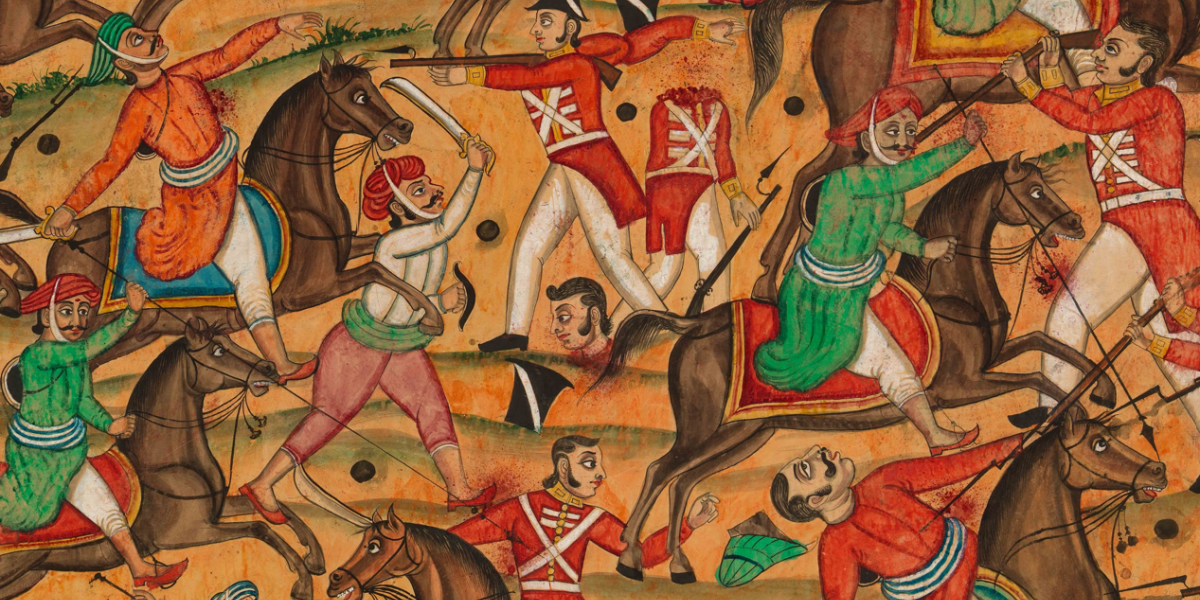 Battle of Pollilur painting © Otto Money | Photography by Todd-White (By Appointment to Her Majesty the Queen).

On September 10, 1780, the forces of the Kingdom of Mysore led by Hyder Ali and Tipu Sultan decimated the East India Company (EIC) soldiers under Colonel William Baillie in the Battle of Pollilur. It was fought on the scrubby Deccan terrain punctuated by towering monoliths, about 15 km north of the modern-day Kanchipuram.

A spectacular panoramic artwork depicting this historic moment was sold in London on March 30, 2022, for £630,000 as part of a Sotheby’s auction of Arts from the Islamic World and India.

According to the BBC, historian William Dalrymple has described this 32-foot painting from the 19th century as “arguably the greatest Indian picture of the defeat of colonialism that survives”. Battle of Pollilur painting © Otto Money | Photography by Todd-White (By Appointment to Her Majesty the Queen).

The Battle of Pollilur was one of the key engagements in the second Anglo-Mysore war fought between 1780 and 1784. The colonial narratives of the period and those of the next century often emphasised the defeat of local rulers and the conquest of their states to promote the myth of European military superiority in arms and strategy. For this reason, the moments from the third and fourth Anglo-Mysore Wars find greater representation in artistic works.

The nationalist historians from the early 20th century emphasised these humiliations and betrayals to forge cross-community unity against British domination. The divisions and short-sightedness of regional rulers that allowed the sub-continent to come under imperial rule was attributed to the policy of Divide et Imperia – divide and rule. It is therefore unsurprising that a painting depicting the victory of an Indian king does not find an easy place within either of these perspectives.

Contemporary scholarship has taken a more circumspect view of this period, and insights have emerged from a body of literature concerned with the various contingent factors that led to a sharp disparity in development between Asia and the rest of the world during the late 18th century. This debate about a great divergence between Europe and Asia, sometimes privileges economic factors over sociocultural ones. However, there is also a recognition of subtle forms of violence that accompanied colonial expansionism, and in India, systematic deindustrialisation. Certain kinds of stories and knowledge systems were erased.

The history of the painting, and the mural in Daria Daulat Bagh that it is based upon, serves as a metaphor for this kind of violence. When it was commissioned sometime after 1784, the mural commemorated the victory and the transition of power that had taken place from Hyder to Tipu in 1782. It was subsequently whitewashed and re-painted during the period of British occupation after 1799. The copy, which is going on sale, is believed to have been created sometime around 1820.

According to Otto Money, the current owner of this copy, “The painting is made on thin paper (attached to thicker paper beneath), a bit like tracing paper, on which the artist or artists made an underdrawing sketched in charcoal before applying colour.” The bright colours of this painting are quite unlike the mural, and other copies that are known to exist. According to colonial records, experimental use of colours available at the time, for example, sky blue horses also featured at some point, but they seem to have disappeared from extant versions.

An exhaustive study of the mural has been made by Dr. Veena Shekar, in her book Historical Paintings of Srirangapatna: A Stylistic Study, published posthumously in 2010 after her untimely death. According to Otto, the book “is one of the most interesting on the whole subject.”

As Dr. Shekar suggests, a good referent for the style of the artwork is found in the inspiration for the Daria Daulat Bagh complex – the Chehel Sotoun in Isfahan, in modern day Iran. The miniature style adopted for the frescos in this complex, such as the portrayal of the Battle of Chaldiran in 1514, reveals rich texture, and the substance of the battle plays out in a manner quite different from a moment frozen in time – a distinct feature of English propaganda art of the period.

In the miniature style, the narrative unfolds in a conflation of time and space. The visual centre of the painting is occupied by the thundering mass of Mysore cavalry. According to historical records, the Tipu force numbered some 6,000 horsemen, with 12 light and six heavy guns, along with supporting infantry. Hyder Ali commanded another detachment, with both of these smaller formations peeling off from the main body of the Mysore army which was besieging Arcot. At the start of the hostiles in July 1780, the Mysore cavalry alone numbered almost 40,000.

The East India Company forces, suffering desertions and uncoordinated leadership, formed a defensive square on a patch of high ground, with the Scotsman William Baillie leading a final stand. His story, documented in a piece of revisionist history by a descendant, Alan Tritton, is detailed in the book When the Tiger Fought the Thistle: The Tragedy of Colonel William Baillie of the Madras Army.

Mysore light cavalry had multiple advantages in this battle – knowledge of the terrain, manoeuvrability and speed. The bullock depicted inside the English square reveals an interesting detail. The East India Company forces were underpaid, under-resourced and short of accurate maps of the area. The East India Company artillery pieces were often hitched or limbered to bullocks, and the creatures were in short supply.

When the East India Company infantry was cut off from the safety of Kanchipuram and the stronghold of Fort St. George in Madras where a larger English force remained encamped (and unwilling to rally with Scottish troops!), they were caught in a double envelopment movement by Mysore cavalry, encircled and routed.

There is nothing particularly European about this tactic, and it can be dated back to use by Alexander the Great and Hannibal.

The re-emergence of rocketry

In this battle, the quick manoeuvres, the deft placement of guns using embankments and features, and the novel use of horse and rocketry to harass the enemy are all noteworthy. The statement that Tipu defeated the British with European tactics is therefore “ungenerous”. At best it belies a poor awareness of the confluence of military cultures of the region, and at worst it reproduces a racist colonial myth of superiority. In this engagement we can see the signature disruptions linked to main thrusts, redolent of Pindari raiders, the mobile artillery of Ahmednagar and innovative tactics of the iron-cased rocketry of Mysore at play. The least palatable aspect of the battle is the total destruction of the enemy unit, which was denied the possibility of any retreat.

The most interesting feature of this battle, from the perspective of strategic history, is the re-emergence of rocketry. Rockets had declined in significance as a tool for bombardment with improvements in mortar fire. At Pollilur they made an emphatic reappearance, restricting the East India Company’s vanguard movement, skimming along the surface, lacerating troops, and in one specific instance, shattering an Ensign’s leg.

The rockets are a footnote in the battle characterised by cavalry manoeuvres; they are entirely absent in the mural and painting. The tactical usage of rockets and their deployments is an area for further research, allied to the recent breakthrough discoveries in their material culture. When read against older ballistics-informed assessments of the range and performance of iron-cased rockets, a fascinating story emerges of a developing technology that has been overshadowed by colonial myth-making.

An equitable reading of the painting and its history seems a path out of erasure and obfuscation. As the painting goes on sale, one marvels at the shared heritage that exists between India and England – not all of which is comfortable. Seventy-five years into India’s democratic journey seems as good a moment as any, to negotiate the grounds for increasing areas of convergence.

Ram Ganesh Kamatham is a playwright and researcher. His play Vanguard is based on research into the story of the Mysore rockets, and this article is part of a forthcoming monograph on the Battle of Pollilur. The research on the rockets and the painting was carried out with Mallika Prasad of Actors Ensemble India Forum at the India Office Records of the British Library, supported by a Charles Wallace India Trust Research Grant in 2014.