Tejaswi Surya and the BJP Have Got Their History Completely Wrong

The Mughal state under Akbar saw a unique experiment in Mughal-Rajput cooperation, and Amber – as the principality that sparked it – gave the Mughals their ablest commanders. 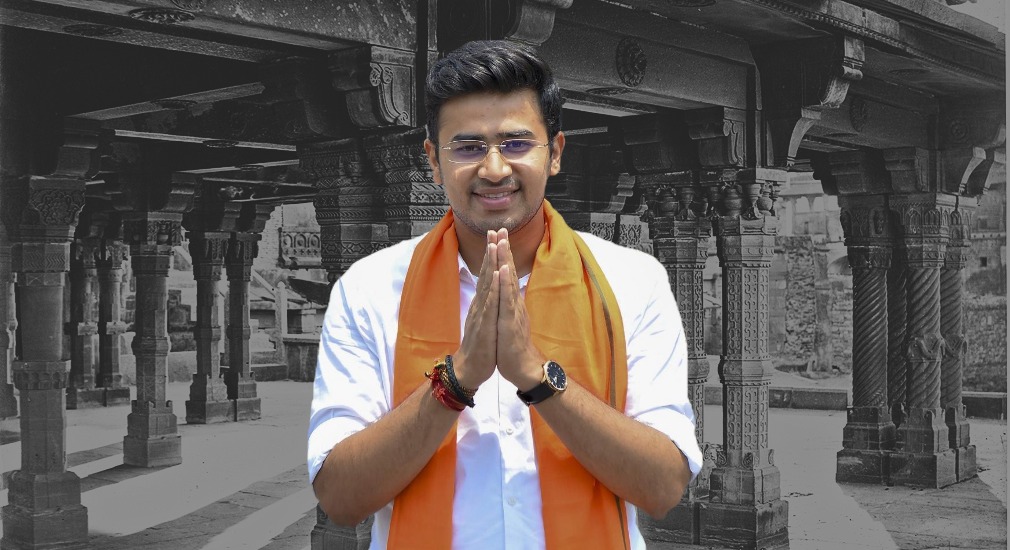 What makes statements like Tejasvi Surya's possible, without as much as a squeak from large sections of Indians? Illustration: The Wire

Bharatiya Janata Party MP from Bengaluru Tejasvi Surya has courted controversy by saying that Mughal Raj is not far away if the majority community is not vigilant. In this, he took recourse to a completely skewed historical narrative to divide society on Hindu-Muslim lines.

Condemning the Shaheen Bagh protests against the Citizenship (Amendment) Act, he said in parliament that the protests were a case of Islamism masquerading as constitutional secularism.

This statement is only one among a string of statements from the ruling party seeking to polarise society at a time when the economy, which is in an almost unprecedented crisis, needs to be discussed. Protests against a law that treats Muslim undocumented immigrants from Pakistan, Afghanistan and Bangladesh differently from other undocumented immigrants from the same countries should be seen as legitimate constitutional actions in a secular, democratic country.

But what makes these statements possible, without as much as a squeak from large sections of Indians? The answer lies in a distortion of history practised on a mass scale for more than a century now.

This history is the most vicious ingredient of a hate politics that seeks to divide India against itself. It was first constructed by the British – with an eye on ensuring that India looked backward compared to the West and also to drive a wedge between Hindus and Muslims – and has been borrowed almost entirely by Hindutva. The latter’s only innovation to it is a discourse of pseudoscience when it comes to India’s ancient past, where every discovery of modern science can be found.

Colonial voices like James Mill and Vincent Arthur Smith wrote histories dividing India’s past into three stages: Hindu India, Muslim India and British India. The third is British and not “Christian” – thus breaking from the pattern followed in the first two – to emphasise that the British, as a modern and civilised people, were secular and above the fray, while Indians were primitive and religious, leading to religion appear to be the moving force in their history. Historian Gyan Pandey has contributed immensely to our understanding of how the colonial state constructed – and inferiorised – the history of India, camouflaging its own rapacious presence as a civilising mission.

In light of this colonial periodisation of history, India was conceptually divided into a Hindu and Muslim India, with the medieval times as a theatre of conflict between the two. It became – within the colonial and identitarian discourses – two warring nations at a time when many stellar nationalists were trying to forge a united Indian nationalism.

This history was internalised by many educated Indians in the 19th and 20th centuries, and the Mughal times became a “dark age”.

However, three heroes were projected as ‘Hindu India’s answer’ to Muslim rule: Maharana Pratap, Chhatrapati Shivaji and Guru Gobind Singh. What tied them together in the Hindu imagination was the fact that they waged wars against the “Muslim” rulers. These three heroes come across in the Hindutva narrative as a sort of oasis in a desert of Hindu subordination, which feeds the false and hurtful discourse of “Hindu cowardice”, providing a certain unrelenting aggression to Hindutva as an ideology.

Let us now break down this skewed history and bring a modicum of reason to it, making the point as clearly as possible that medieval times cannot be seen as an arena of Hindu-Muslim conflict.

The Mughal state since Akbar was inclusive when it came to offering high offices to non-Muslims. It is significant that Rana Pratap, Shivaji and Guru Gobind Singh never fought Akbar or Aurangzeb in a direct battle. They fought either Hindu kings leading the Mughal armies or provincial governors.

It was Raja Man Singh of Amber who took on Pratap in battle. By this time, most Rajput kings had become allies of Akbar, matrimonial alliances had been established with most, and many were commanders of Mughal armies.

Historian Satish Chandra writes in his book Medieval India: “Thus, during this period, apart from being loyal allies, the Rajputs begin to emerge as the sword-arm of the empire. This point was further emphasised when in 1576, Man Singh was appointed to lead the Mughal army against Rana Pratap.”

It was a Mughal force under the command of Man Singh of Amber that took on Rana Pratap’s force – which had an Afghan contingent under Hakim Khan Sur and a contingent drawn from the Bhil tribe – at Haldighati in 1576. The Rana could retreat to the hills to continue his fight, earning a name for himself as a man with rare courage and commitment.

However, little is said about the rulers of Amber (later Jaipur) – Bhar Mal and his grandson Man Singh – within this fanciful narrative of Hindu-Muslim strife. This is one of the lacunae of Hindutva history, which embraces an uneasy silence on the Kachhawahas of Amber.

The ruling dynasty of Amber was Akbar’s staunchest ally and also known for its valour. No insinuation of cowardice against them can stand the test of historical scrutiny.

Apart from Mirza Aziz Koka, Man Singh was the only Mughal noble with a mansab of 7,000 in Akbar’s time. The Ain-e-Akbari of 1593-94 lists 13 of the 27 Rajput nobles of Akbar as Kachhawahas. They were, indeed, the sword arm of the empire, and loved to fight battles and defend forts. One anecdote mentioned by Satish Chandra sheds light on their valour:

“The Rajputs had made a favourable impression on Akbar when, in 1557, he was riding an elephant which had gone out of control, and everyone had fled away except a band of Rajputs under Bhar Mal, the ruler of the small principality of Amber, who had stood firm.”

Jai Singh, after whom the city of Jaipur is named, was considered very close to Aurangzeb. “He was so close to Aurangzeb that a contemporary historian, Ishwardas, calls him the key to Aurangzeb’s brain,” writes Chandra. He was also given the crucial charge of the Deccan, which was seeing the rise of the Marathas under Shivaji.

It was Jai Singh who took on Shivaji in battle, besieged fort Purandar, where Shivaji was lodged, in 1665, and forced a treaty on the Maratha king, whereby he ceded 23 of his 35 forts to the Mughals. But he wanted to make Shivaji an ally of the Mughals to jointly defeat Bijapur, something Aurangzeb was not enthusiastic about. Jai Singh invited Shivaji to Agra, but the latter felt insulted when offered a mansab of just 5,000 and walked out of the court. This was taken as an insult to Mughal prestige: while Jaswant Singh of Jodhpur demanded exemplary punishment, Jai Singh sought lenient treatment for Shivaji, who had been imprisoned.

It was Shivaji’s escape from Agra – he had visited the city on an invite by Jai Singh – that was considered by Aurangzeb as a great blow to his prestige, and he removed Jai Singh as the viceroy of the Deccan. “Dispirited and heart-broken, Jai Singh died soon after (1667),” Chandra writes.

A rethink of the role of the Kacchhawahas of Jaipur and their role in forging a cross-community Mughal aristocracy has not been given the attention it deserves. And even for the Hindutva narrative, they are an object of silent unease.

However, some policies of Aurangzeb did put the composite nature of the Mughal empire under stress. These included the re-imposition of jizya on Hindus, the execution of Guru Tegh Bahadur (which led to hostilities with the Sikhs under Guru Gobind Singh) and even hostilities over who would succeed Jaswant Singh of Marwar after his death.

The rich tradition of Hindu-Muslim imperial alliances had become a part of popular imagination, something disrupted by colonial history writing and carried forward by Hindutva. It was the last Mughal emperor, Bahadur Shah Zafar, who was named Shehenshan-e-Hindustan (emperor of India) by the freedom fighters of 1857, which was the first major uprising for freedom from the British. The rebels were largely Hindus from Bihar and Uttar Pradesh, but chose the Mughals rather than Hindu kings as the marker of legitimacy.

Folk songs called Jallas are sung during Rajput marriages in Jaipur to this day. At least as per one influential tradition, Jalla refers to Jalaluddin Mohammad Akbar, who married Harkha Bai, a princess of Amber, an event that kicked off the Mughal-Rajput alliance. The erstwhile ruling family of Jaipur is still as “Hindu” as it gets and claims to descend from Lord Ram.

Present polarisation in India is considerably aided by a skewed historical narrative that finds its way into the speeches of BJP leaders, into the themes of movies like Padmaavat and Tanhaji, and sometimes into textbooks. This narrative has to be exposed for what it is, and more nuanced narratives that capture medieval India in its complexities need to popularised at all levels, including textbooks, art, cinema and civil society debates.

Vikas Pathak did his PhD from JNU and teaches at the Asian College of Journalism, Chennai.