T.C.A.Raghavan and Vivek Mishra's 'Sapru House: A Story of Institution Building in World Affairs' should be essential reading for anybody embarking on the serious study of international relations in India.

If there is one institutional history in India that has long deserved a telling, to my mind this is it. The Indian Council of World Affairs (ICWA) has been in existence since 1943. However, till date we lacked a systematic institutional narrative of its chequered life. T.C.A. Raghavan and Vivek Mishra, in Sapru House: A Story of Institution Building in World Affairs, drawing on the internal archives of the ICWA, offer us a well-researched and balanced account of the non-linear institutional trajectories that informed the effort to systematically build the study of international relations and area studies in India.

Why is this a worthwhile book to engage? How international relations and area studies were established is important to understand for a number of reasons. To begin with, it is critical, especially for a younger generation, to get a realistic sense of the milieu that framed how a postcolonial state was charting its course as an independent political entity and what this meant, especially in the realm of international engagement and building relevant scholarship.

India had to reboot its relationship with now an erstwhile coloniser and other major powers in the international system. Other questions inevitably surfaced. What fundamental political values were we going to commit to, both nationally and internationally? How could we breathe life into the principles of sovereign equality and liberal internationalism that the United Nations was on the cusp of inaugurating? Simply put, given the power differentials, how could India overcome its colonial past and find its own feet in an uncertain international environment? 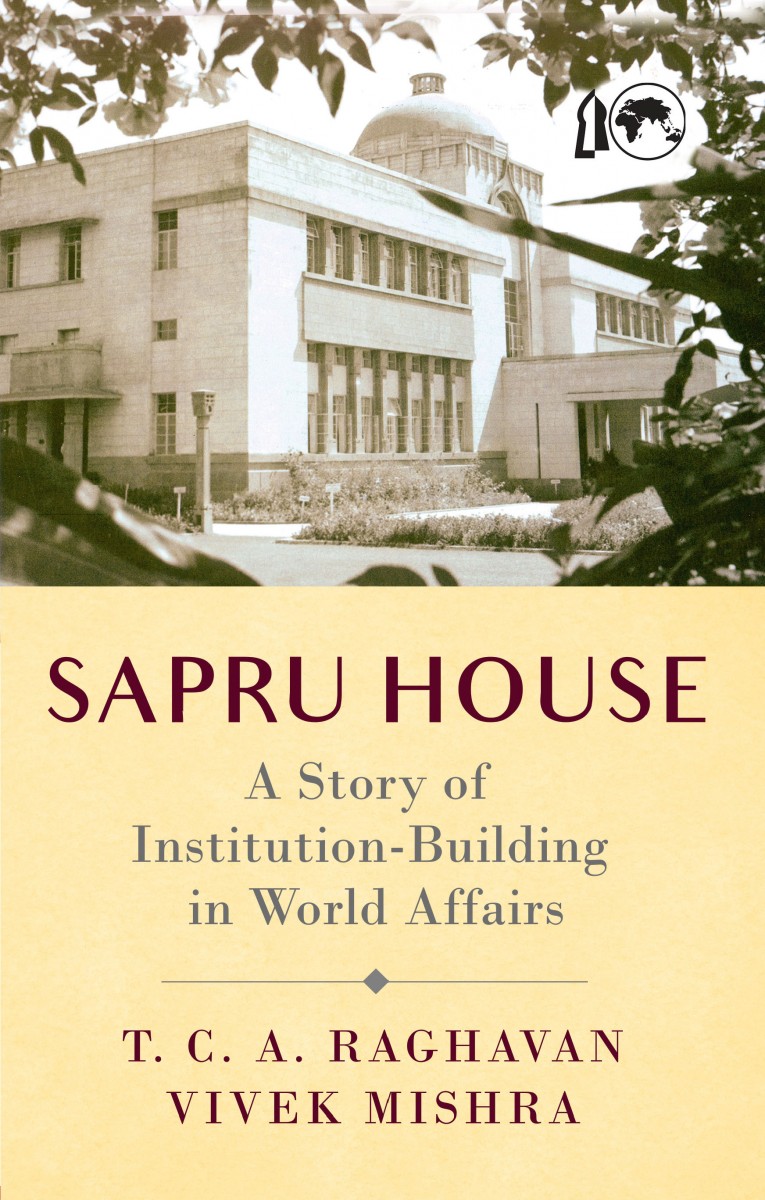 The anti-colonial nationalist firmament produced a number of tall intellectuals. There is no recounting this story without a sense of the life worlds and deep idealism (used here in the best sense of the term) that informed the actions of Jawaharlal Nehru, Tej Bahadur Sapru, Pandit Hridaynath Kunzru, Angadipuram Appadorai and subsequently M.S. Rajan. Many of these figures were among the early stalwarts who played a vital role in institutionalising the ICWA. Raghavan and Mishra’s account does a fine job of capturing the atmospherics that motivated many of these figures. It gives us a reasonable sense of the distinct personalities and political preferences that populated the milieu and the times.

However, the book glosses over an important dimension. On hindsight, what we now notice is notwithstanding the best intent, this is a predominantly an ‘upper’ caste and male leadership. For disciplinary historians of international relations, the subtle and not-so-subtle effects this entailed in the subsequent unfolding of the Indian variant of the discipline both in caste and gender terms is an intellectual inquiry worth pursuing in its own right.

There are a number of other reasons why this narrative matters. From Raghavan and Mishra’s account, we learn that a fundamental challenge remained the positioning of the ICWA internationally. The quest for an ‘objective’ study appeared to be a dominant motif. What we now can acknowledge is that ‘objectivity’ as holy grail is indeed hard to accomplish in the best of times. It is a guise that the Global North has often employed to present its knowledge claims as neutral, when indeed they were unmistakably partisan. If as the international relations scholar Robert Cox once asserted, ‘theory is always for someone and for some purpose’, by analogy, there is no harm in coming clean on our own assumptions behind instituting the study of international relations and area studies in India.

The ICWA was set up with a laudable goal – that of encouraging the development of original perspectives relating to international relations and area studies from a distinctively Indian vantage point. There is no apologia that this needs to warrant. The challenge really remained – then and now – one of communicating this intent successfully to the wider world. While it may be hard and indeed misplaced to argue that there is a quintessential Indian take on world affairs, what might be more worthwhile is to argue that context matters in the manner in which we navigate the world. What India encounters, from where we find ourselves in spatial and temporal terms, is bound to throw up its own specificities.

Another strand worth gleaning from this account is to learn from the institutional successes and failures that greeted the ICWA. A remarkable success story was the hosting of the Asian Relations Conference in 1946, three years after its founding. Raghavan and Mishra capture persuasively the massive effort that went into this collective endeavour at the ICWA and how it eventually contributed substantially to enhancing the stature of the institution. That the ICWA could pull off a big-ticket international event meant a great deal and its wider import was not lost on domestic audiences. Scholars like Appadorai have suggested that this was a precursor which also had a bearing on the subsequent historic Bandung conference in 1955.

A highlight of the ICWA’s history is its founding of a new institution, the Indian School of International Studies (ISIS). Raghavan and Mishra walk us through its early years and its subsequent merger with Delhi University. The ISIS continued operating from the precincts of the ICWA. This phase also saw the fruits of collaboration both in terms of expertise as well as in the establishment of a ‘joint library’, with an accent on library innovations. Subsequently the ISIS had another re-incarnation, this time with its absorption into Jawaharlal Nehru University (JNU) in 1970. The outcome, it turns out, was calamitous – particularly in terms of the messy ‘bifurcation’ of libraries at both Sapru House and JNU. It resulted in considerable losses of books which were never digitised and whose rare copies cannot be located to this day.

An integral element of the ICWA’s institutional story is the constant effort by the pioneers to protect its autonomy and not rely on state patronage as a source of revenue for the institution. The ICWA did well, especially in the first three and a half decades of its existence, to retain a fair degree of this autonomy. However, with the passage of time and for a variety of reasons – the principal one being financial challenges – the ICWA eventually was compelled to retract from this model. Raghavan and Mishra do not paper over the institutional rot that had set in, particularly in the 1980s and the 1990s. After illustrious beginnings in the 1940s, by the end of the 20th century, the ICWA had almost come to be reduced to rubble – both metaphorically and literally.

Institutional pathologies were manifest in practices that altered the composition of decision-making administrative bodies in the ICWA, the rigging of preferences when it came to internal elections through altering the composition of the electorate, corrosive factionalism and allegations of financial malfeasance all of which crippled the ICWA substantively. As an inevitable consequence, the tapering of research priorities was a clear departure from the original mandate of the ICWA. Till this day, despite a steady recovery, the ICWA is yet to reclaim its original intellectual sheen.

To cut a long story short, the ICWA secured a new lease of life on September 3, 2001, when it came directly under the government through the ICWA Act. This was significant because the earlier protracted legal wrangling to ensure the objective had taken a toll on the institution, as also public patience, causing some consternation about its actual possibility. Raghavan and Mishra’s account reveals that the most significant guarantee now was a degree of financial stability that was conspicuous by its absence in the earlier decades of its independent existence. What this has meant subsequently for its actual institutional autonomy is a moot question and one that remains unanswered in the book.

However, on balance, some of the original impulses of the ICWA’s founding retain a special relevance today. These include attempts to safeguard institutional autonomy, with lessons for future institutional design, retention of a vibrant internal culture of discussion in the early decades of its founding, non-Delhi centricity (with several branches spread across the country), the anchoring of ideas in a firm context, the establishment of a serious journal (the India Quarterly), an openness to visiting international academics and most significantly the desire to transcend Eurocentrism and decolonise international relations. These priorities are well worth reiterating even today.

Another feature that the book successfully captures is the tension between academic research and public policy research. Here again, there is an urgent need for a wider public conversation. There are occasions when the hubris of some practitioners or the ideological blinkers of some academics stymie this conversation. However, there surely are more constructive ways to advance the conversation for both professional communities.

There are several other fascinating stories nested in the book, within the larger histories of institution building. The selfless dedication involved in building Sapru House and the architectural detailing is a fine nugget. All in all, this is a significant book. It should be essential reading for anybody embarking on the serious study of international relations in India and for that matter anywhere else in the world where decolonisation of knowledge is viewed as a serious ongoing concern.