For the early Europeans who came to India to trade, the Moghuls were an inspiration in the most unusual way. They were not royalty, but they did have grandiose ambitions. Perhaps they were inspired by the Moghuls. Many of the officers of the East India Company who came to Hindustan to trade, became fabulously rich, often by doing business on the side. They lived in style.

Back home, in Britain, they were sneeringly called ‘nabobs’, pretend aristocracy who were actually quite common. Some of them tried to break into the British upper classes and even influence the political process.

A few, buccaneers like Robert Clive, who after looting a huge fortune in India, came to grief in Britain. But many others lived and died in India and were buried here. What they left behind gives an indication of not just their status but also their aspirations.

To get an idea of how Company officials saw themselves, one just has to head to the English cemetery in Surat. Obelisks, cupolas, pillars, many of them clearly inspired by Moghul architecture-they are all here, 250 years after they were erected by fond relatives and friends to commemorate the great and the good of the East India Company. 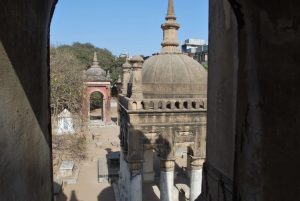 There is no dearth of graveyards of the British in different parts of India – from Park Street in Kolkata to Sewri in Mumbai and many other places where the British were based. Many of the graves have elaborate statuary and fancy memorials in graveyards, but hardly anything rivals the large and ornamental mausoleums of Surat. It is as if, like the great Pharaohs of Egypt, the officials, especially based here in the 17th century, wanted to leave behind structures that would inspire awe and wonder for centuries.

But as Shelley wrote about Ozymandias, King of Kings, it was a delusion. Today, the English cemeteries lie forlorn and neglected, the once important names obliterated – literally – and long forgotten, all the hubris and the pride gone.

Situated in Katargam, an old part of Surat, the cemetery remains neglected, with a sole caretaker from the Archeological Survey of India (ASI) manning the place. Only architecture students and tapophiles (tombstone tourists) visit the cemeteries and, very occasionally, someone from abroad tracing their genealogy comes by. But for anyone interested in colonial history, it can be very rewarding.

Surat was where the early British arrivals settled after Jehangir gave them a permit to trade in India in 1613. They set up a ‘factory’ – a trading post – and began conducting business. It was a tough existence – the British had to contend with hostile Portuguese, other Mughals, especially the young crown prince Khurram (Shah Jehan), Jesuits, and of course local traders.

In the 17th century, Surat was a bustling entrepôt, trading with Southeast Asia, Arab countries, Africa and beyond. Ships called at its harbour in large numbers, coming laden with imported goods and leaving with silks, spices and precious stones. The Portuguese had already been busy here since the 16th century, much before the East India Company was formed in 1600-now the English, and soon, the Dutch and others wanted some of the action. That meant competition and in the early years, things were difficult for the English company. But many of them did make money and some rose to become important officials of the Company. A vintage photo of the tombs of early English settlers in Surat. Credit: Wikipedia Creative Commons

Many of those are buried here, including George Oxenden, the first Company governor of Bombay Presidency, his brother Christopher, and the second governor successor Gerald Aungier, said to be the man who laid the institutional foundations of the seven islands to transform the area into a town. The tomb is unmarked, but most historians now agree it is his. Both are handsome structures, with a dome and staircases leading to an upper level.

There are several others, the marble plaques faded, and quite a few unmarked, small graves, totalling over 400. The graves of those who died in the 19th century are far more modest – by this time the Company had moved its headquarters to Bombay,

The Dutch too had come to Surat, setting up a directorate there in 1616. They were traders and established a small base in the town. There was competition between the two European trading powers and rivalry also in building grand tombs.

The Dutch cemetery is walking distance from the English one; it is smaller but has no dearth of large mausoleums, the biggest one being that of Hendrik Adrian Baron Van Reede, a director of the Dutch East India Company who died in December 1691. “His grandiose mausoleum was intended to rival and eclipse that of his rivals the Oxendens,” says a board in the graveyard. It has a cupola and a gallery above supported by “handsome” columns below. The tomb was adorned with escutcheons and paintings, which have long since gone, though the walls and roof still retain floral designs.

In a small portion of the Dutch cemetery lie many stone plaques that are the graves of the handful of Armenians who lived here at one time, as traders. The caretaker says occasionally someone will come and specifically ask to see Armenian graves. 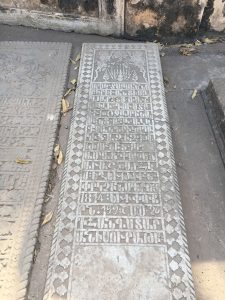 British graves in India are said to number in their hundreds, though in several places these have been vandalised or built over. The British Association of Cemetries in South Asia has recorded the inscriptions on many graves and tries to ensure their upkeep. The ASI has so far ensured that the Surat cemeteries are kept intact.

But is anyone really interested in knowing about history, especially much reviled colonial history? Around the graveyards, are new residential buildings, small businesses and a busy flyover; how long before the inevitable pressures of the modern world once and for all wipe out this vestige of another time?