"All their speeches were fill of communal poison, he wrote after banning the Sangh in 1948. "As a final result of the poison, the country had to suffer the sacrifice of the invaluable life of Gandhiji." 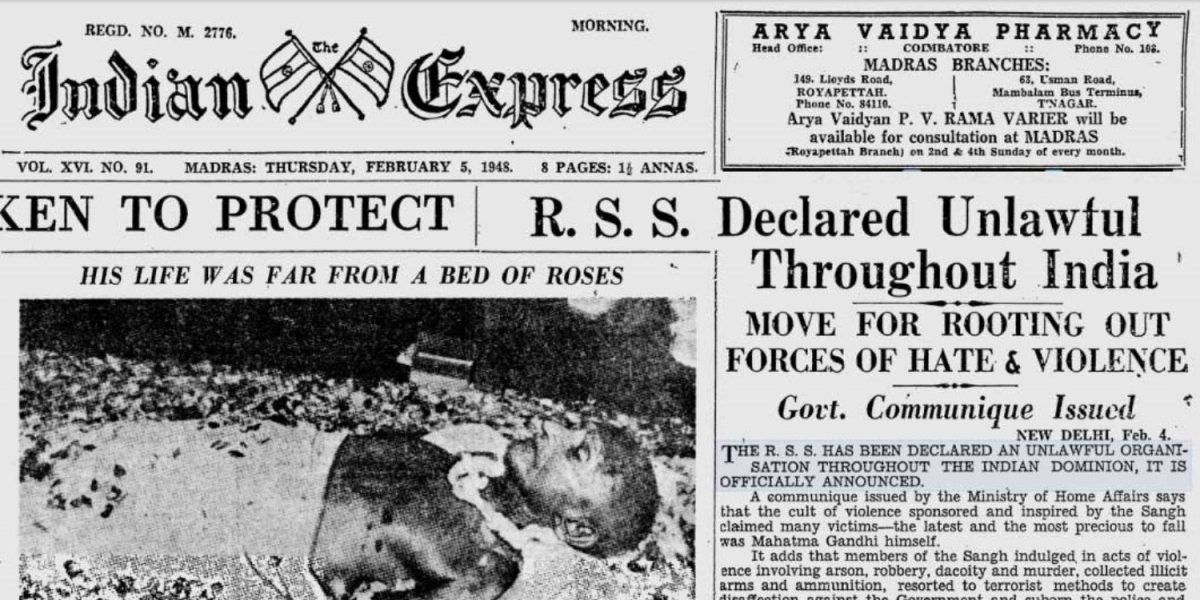 The Indian Express front page announcing that the RSS had been banned.

On this day, in 1948, Sardar Patel had issued a communique to ban the RSS and “root out forces of hate and violence”. This article, first published on October 31, 2018, is being republished on February 4, 2021, to mark the anniversary of the announcement.

While the Sangh parivar and its associates, including the Rashtriya Swayamsevak Sangh (RSS), are busy appropriating the legacy of Sardar Patel, the organisation seems to have forgotten that the ‘Iron Man’ was a staunch critic of its politics and had it banned after the assassination of Mahatma Gandhi. In fact, Patel, then the home minister of the country, wrote to RSS leaders in 1948 explaining his decision to ban the group.

In a communique issued on February 4, 1948, the Central government said it was banning the RSS “to root out the forces of hate and violence that are at work in our country and imperil the freedom of the Nation and darken her fair name”.

Here is the full text of the communique, available in the Ministry of Home Affairs archives:

In their resolution of February 2, 1948, the Government of India declared their determination to root out the forces of hate and violence that are at work in our country and imperil the freedom of the Nation and darken her fair name. In pursuance of this policy the Government of India have decided to declare unlawful the Rashtriya Swayamsevak Sangh in the Chief Commissioner’s Provinces. Similar action is also being taken in the Governor’s Provinces.

As democratic governments, the Government of India and the provincial governments have always been anxious to allow reasonable scope for genuine political, social and economic activities to all parties and organisations including those whose policies and purposes differ from, or even run counter to their own, subject to the consideration that such activities should not transgress certain commonly recognised limits of propriety or law. The professed aims and objects of the Rashtriya Swayamsevak Sangh are to promote the physical, intellectual and moral well–being of the Hindus and also to foster feelings of brotherhood, love and service amongst them. Government themselves are most anxious to improve the general material and intellectual well–being of all sections of the people and have got schemes on hand which are designed to carry out these objects, particularly the provision of physical training and education in military matters to the youth of the country. Government have, however, noticed with regret that in practice members of the Rashtriya Swayamsevak Sangh have not adhered to their professed ideals.

Undesirable and even dangerous activities have been carried on by members of the Sangh. It has been found that in several parts of the country individual members of Rashtriya Swayamsevak Sangh have indulged in acts of violence involving arson, robbery, dacoity, and murder and have collected illicit arms and ammunition. They have been found circulating leaflets exhorting people to resort to terrorist methods, to collect firearms, to create disaffection against the government and suborn the police and the military. These activities have been carried on under a cloak of secrecy, and the government have considered from time to time how far these activities rendered it incumbent on them to deal with the Sangh in its corporate capacity. The last occasion when the government defined this attitude was when the Premiers and the Home Ministers of provinces met in Delhi in conference towards the end of November.

It was then unanimously agreed that the stage when the Sangh should be dealt with as an association had not yet arrived and that individuals should continue to be dealt with sternly as hitherto. The objectionable and harmful activities of the Sangh have, however, continued unabated and the cult of violence sponsored and inspired by the activities of the Sangh has claimed many victims. The latest and the most precious to fall was Gandhiji himself.

In these circumstances it is the bounden duty of the government to take effective measures to curb this reappearance of violence in a virulent form and as a first step to this end, they have decided to declare the Sangh as an unlawful association. Government have no doubt that in taking this measure they have the support of all law–abiding citizens, of all those who have the welfare of the country at heart.

While Sardar Patel may have had a soft spot for the RSS before Gandhi’s assassination, he wrote strongly against the group’s activities in the aftermath of the crime. Patel wrote to Hindu Mahasabha leader Syama Prasad Mookerjee on July 18, 1948, indicting the RSS for continuing with its activities despite the ban:

“There is no doubt in my mind that the extreme section of the Hindu Mahasabha was involved in the conspiracy [to kill Gandhi]. The activities of the RSS constituted a clear threat to the existence of Government and the State. Our reports show that those activities, despite the ban, have not died down. Indeed, as time has marched on, the RSS circles are becoming more defiant and are indulging in their subversive activities in an increasing measure.”

Patel also wrote to M.S. Golwalkar in September 1948, explaining his decision to ban the RSS. He said:

“Organising the Hindus and helping them is one thing but going in for revenge for its sufferings on innocent and helpless men, women and children is quite another thing…apart from this, their opposition to the Congress, that to of such virulence, disregarding all considerations of personality, decay of decorum, created a kind of unrest among the people. All their speeches were fill of communal poison. It was not necessary to spread poison in order to enthuse the Hindus and organise for their protection. As a final result of the poison, the country had to suffer the sacrifice of the invaluable life of Gandhiji. Even an iota of the sympathy of the Government, or of the people, no more remained for the RSS. In face opposition grew. Opposition turned more severe, when the RSS men expressed joy and distributed sweets after Gandhiji’s death. Under these conditions, it became inevitable for the Government to take action against the RSS…Since then over six months have elapsed. We had hoped that after this lapse of time, with full and proper consideration, the RSS persons would come to the right path. But from the reports that come to me, it is evident that attempts to put fresh life into their same old activities are afoot.”

In November 1948, Patel met with RSS chief M.S. Golwalkar at the latter’s request. They met twice, according to a government communique issued on November 14, 1948. In the first meeting, Golwalkar said he needed time to speak to his supporters and influence them along the “right lines”. In the second meeting, however, Golwalkar reportedly said that he could not “bind himself to any change until the ban was lifted”. The Centre then contacted provincial governments, the communique states, which said that “activities carried on in various forms and ways by the people associated with the RSS tend to be anti-national and often subversive and violent and that persistent attempts are being made by the RSS to revive an atmosphere which was productive of such disastrous consequences in the past. For these reasons, the provincial government have declared themselves opposed to the withdrawal of the ban and the Government of India have concurred with the view of the provincial governments.”

After Golwalkar was told of this decision, he sought further meetings with both Patel and Jawaharlal Nehru, but Patel refused to meet him again.

The RSS chief then wrote to the prime minister and home minister, “explaining inter alia that the RSS agrees entirely in the conception of a secular state for India and that it accepts the National Flag of the country and requesting that the ban imposed on the organisation in February should now be lifted.”

“The professions are however quite inconsistent with the practice of his followers and for the reasons already explained above, the Government of India find themselves unable to advise provincial governments to lift the ban,” the government communique says.

The ban on the RSS was eventually lifted on July 11, 1949, after Golwalkar agreed to make certain promises as conditions for the ban being revoked. In its communique announcing the lifting of the ban, the government of India said that the organisation and its leader had promised to be loyal to the constitution and the flag.

…In the light of the modifications made and clarifications given by the RSS leader, the Government of India have come to the conclusion that the RSS organisation should be given an opportunity to function as a democratic, cultural organisation owing loyalty to the Indian Constitution and recognising the National Flag eschewing secrecy and abjuring violence. Indeed the Government feel that, under a Constitution embodying these principles and worked in the right spirit, no reasonable objection can be taken to such functioning.”