Revisiting the Battle of Garibpur, a Precursor to the 1971 Bangladesh Liberation War

Victory in Garibpur was a decisive one, and was among the first secured by the Indian defence forces in the eastern sector in the 1971 war. On November 21, 1971, a major battle ensued on India’s eastern front and it happened before the official declaration of war on December 3, 1971. On those fateful days of November, the first major confrontation took place in a land battle and an air encounter that defined the first victories in the eastern sector in the war, which was later known as the war for the Liberation of Bangladesh. As we approach the golden jubilee of the 1971 operations this battle stands out as worthy curtain-raiser to the famous victory of the Indian defence forces.

Hostilities, however, had erupted earlier in the year on the volatile India-East Pakistan border, and skirmishes had been on the rise from October onwards. Garibpur was a finger-shaped land protrusion into India from erstwhile East Pakistan in the Boyra Salient. The Pakistani artillery was using Salient and Garibpur protrusion to launch artillery fire assaults and raids into Indian positions along the border and in the depth areas. With war imminent, both the Indian Army and the Mukti Bahini were active and engaged in aggressive domination of the enemy by patrolling and raids.

In military parlance, improvement of defensive posture is synonymous with actions taken by both sides to secure their positions for defensive integrity, or also hold and develop a launchpad for intended offensive operations. A decision was taken to prepare for the Indian offensive by securing the area by denying the Pakistanis use of Salient by capturing Garibpur. 14th Battalion, The Punjab Regiment (Nabha Akal) along with ‘C’ Squadron, 45 Cavalry were tasked for the operation.

The attacking forces planned a silent attack on night 20–21 November and moved a patrol ahead of the main body of troops to be the eyes and ears of the main force. The patrol unfortunately encountered an enemy patrol and a clash ensued thus losing the element of surprise. The commanding officer Lt Col R. K. Singh ordered the troops to close in onto the objectives swiftly so as to regain the initiative. Four companies of the battalion and the squadron of tanks swiftly occupied Garibpur by 3 am on November 21 after fierce fighting. The enemy was expected to react violently and resort to a counter-attack to retake the position.

A reconnoitring patrol under Captain M.S. Gill and an artillery observer was sent ahead of the position in the cold foggy wintry night and the patrol picked up the sounds of approaching Pakistani tanks as they thundered down the road to Garibpur. A message was sent to the battalion and the troops and tanks then readjusted to face the enemy from the expected direction of attack. The infantry with its recoilless guns held the area of Garibpur and tanks were sent ahead to meet the Pakistani charge. 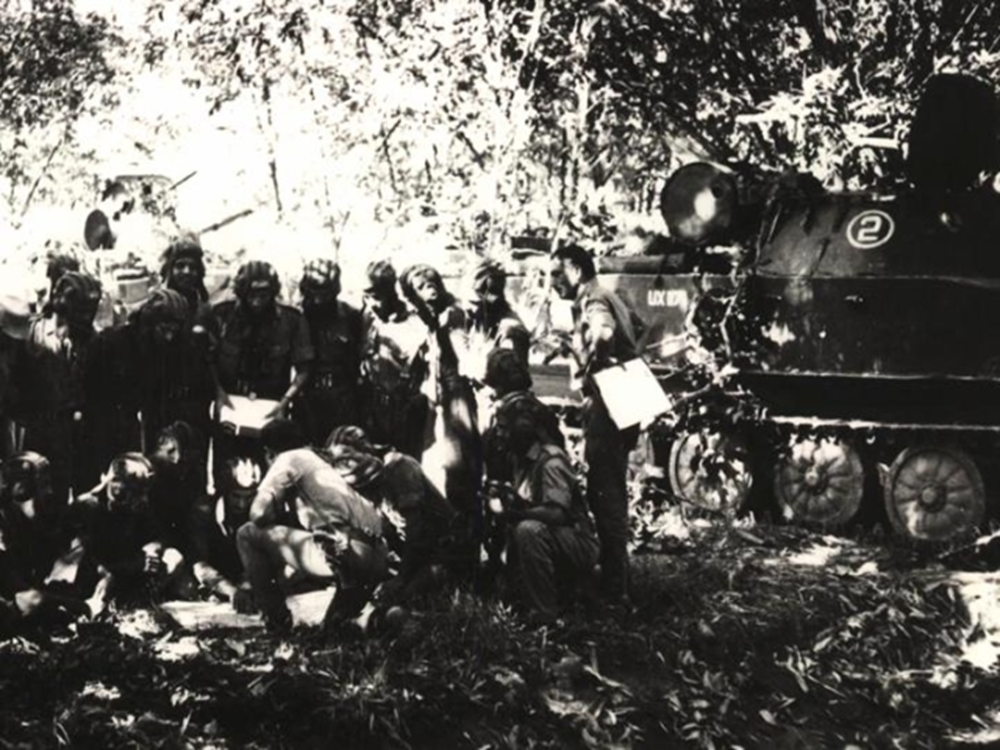 A photograph from the Battle of Garibpur. Photo: Brig Mehta and Anurag Biswas

The counter-attack came as expected and the enemy moved 107 Infantry Brigade and 3 (Independent) Armoured Squadron of American made M24 Chaffee tanks from Jessore, which was nine kilometres to the north of Garibpur.

The first attack came at 6 am and the Squadron Commander of ‘C’ Squadron 45 Cavalry Major D. S. Narang was well prepared. He had skillfully deployed his PT-76 light tanks (the tank is an amphibious tank and has very little armour protection as compared to a main battle tank like the Chaffe in this case) to defend the newly captured areas.

The Pakistani assault was stopped in its tracks by the accurate and lethal fire from the much lighter and inferior PT-76 tanks, as the enemy lost tanks and infantry. Major D.S. Narang was hit and was mortally injured and martyred. He was later awarded the Maha Vir Chakra for his sterling leadership and gallantry.

Three more assaults came as the Pakistani infantry brigade stepped up the tempo and ferocity of its attacks, but 14 Punjab (Nabha Akal) and ‘C’ squadron 45 Cavalry stood firm and fought like tigers even as the last assault reached within 25 yards of their frontlines. Pakistani losses were 60-70 killed, 100 wounded and 11 tanks. Indian losses were seven killed, including Maj D.S. Narang, 22 wounded and 3 tanks destroyed.

One infantry battalion and a squadron of tanks had stopped and beaten back a Pakistani brigade attack. The enemy now resorted to air attacks as four Pakistani F-86 Sabre jets strafed the defences at 9:30 am and damaged the ferry across the Kadadak river in an attempt to cut off the forces.

The Indian Air Force (IAF) who till then were not employed to attack intruders due to not wanting to commence hostilities, were on 22 November, given clearance to intercept the intruding aircraft. The Pakistani aircraft attacked Garibpur three times that day and at 3 pm during a third attack by four Sabres the IAF engaged them with two Gnat and two MIG aircraft (the Gnats earned the sobriquet ‘Sabre Killers’ due to the tremendous success its pilots had in downing the much superior and mint condition newly acquired Sabre Jets of Pakistan). Three Sabres were shot down and the fourth was hit but it scurried back damaged.

Sabre kill viewed from the Gun Camera of a Gnat. Photo: By arrangement.

Two Pakistani pilots bailed out and were taken as prisoners by the Mukti Bahini. One of these pilots was Parvaiz Mehdi Qureshi who later on rose to become the chief of air staff of the Pakistani Air Force(PAF).

This battle was a victory and a decisive one at that – both on the ground and in the air. Garibpur was held in a bold and decisive move by ground troops, one battalion beat back an enemy brigade. In the first aerial combat of the war witnessed from the ground and cheered on by hundreds of troops and locals, a flight of Sabre aircraft was annihilated with three aircraft destroyed compared to none lost by the IAF. Since then Pakistan did not use aircraft in this sector during the entire war.

In 1996, a special incident worth mentioning occurred. When air chief marshall Parvaiz M Qureshi took over as chief of PAF, Group Captain Donald Lazarus wrote a letter to him congratulating him on his achievement. He also mentioned that they had only met earlier albeit briefly in the air and that too in combat. To his surprise, Lazarus received a reply from the Pakistani air chief thanking him for his wishes and complimenting the ‘fight’ shown by the Indian pilots on that day. A reminder that chivalry is not dead among warriors.