At the Red Fort, on August 15, 1947, the past and the present had coalesced to mark a newly independent nation’s step towards the future.

Known by different names at different points of time, such as Qila-i-Mubarak (the Fortunate Citadel), Qila-i-Shahjahanabad (Fort of Shahjahanabad) or Qila-i-Mualla (the Exalted Fort), the Red Fort remains one of the most iconic representations of anti-colonial resistance and India’s Independence Day celebrations. Since 1947, on every Independence Day, successive prime ministers have hoisted the national flag here and addressed the nation from the rampart adjacent to the Lahori Gate, which now forms the public entrance to the fort.

Constructed by the Mughal emperor Shah Jahan between 1638-1649, the Red Fort, which derives its name from its massive red sandstone walls, represented the political and cultural grandeur of the Mughal empire. It was designed as the fort-palace of the new Mughal capital, Shahjahanabad, literally ‘the abode of Shah Jahan’. 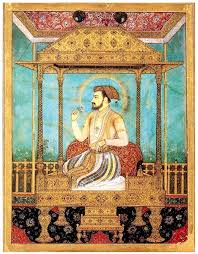 After the reign of Aurangzeb, Shah Jahan’s son and successor, the fortunes of this bastion started dwindling as the later Mughals proved to be very vulnerable. Nadir Shah, the Turk ruler of Iran, attacked Delhi in 1739. He plundered the fort as well as the city and carried away a massive booty, including Shah Jahan’s iconic Peacock Throne and the Koh-i-noor (Mountain of Light) diamond. Subsequently, raids by the Marathas, Sikhs, Jats, Gurjars, Rohillas and Afghans from mid to later 18th century further weakened the Mughal stronghold. In fact, during the time of Shah Alam (1759-1806), it is said that Mughal rule extended from the Red Fort to Palam in Delhi.

(From Delhi to Palam

Is the realm of Shah Alam)

The early 19th century saw the British influence growing in the region. After the capture of Delhi in 1803, the British started taking control of the fort and the city. The early half of the 19th century was relatively quiet for the city, dubbed as years of ‘English peace’.

These were also years of the ‘Delhi Renaissance’, marked by the presence of Ghalib, Momim and Zauq, and the Delhi College, and soon to be overtaken by the rebellion of 1857. In the circumstances that unfolded, Red Fort gained a new identity as the most important symbol of resistance to the might of the British. Once again the Mughal emperor found himself being referred to as the ‘Emperor of Hindustan’.

The year 1857 witnessed an armed rebellion in parts of central India and northern India leading to the loss of British control over these regions for a while (new research suggests that the uprising was far more widespread than hitherto believed). Red Fort and its occupant, Bahadur Shah Zafar, became the most important symbol of the rebellion.

Historian Eric Stokes writes that the rebel soldiers showed a “centripetal impulse to congregate at Delhi”. Pressured by the rebels, a reluctant 82-year-old Mughal emperor became the leader of the rebellion while real power was exercised by rebel soldiers, princes and nobles.

The fall of Delhi sparked off mutinies and uprisings; the rebellion acquired a civil and popular character in parts of north India. With the coming of the rebel troops from Bareilly to Delhi, led by Muhammad Bakht Khan, a government was formed combining civil and military administration.

Muhammad Bakht Khan was nominated Sahib-i-Alam Bahdur (governor general) and he functioned with the help of an administrative court. Historian K.N. Panikkar points out that the court conducted the affairs of the state in the name of the emperor. He was recognised as an emperor by all rebel leaders. Coins were struck and orders were issued in his name.

A retreating British army took refuge in the Delhi Ridge area while waiting for the reinforcements from Ambala. Historian Rudrangshu Mukhjee writes that their aim was to regain control of Delhi which had become the focal point of rebellion. Other centres of revolt were soon suppressed.

After gaining control of Delhi around September 1857, the British resorted to harsh reprisals marked by summary court martial and hangings, blowing rebels from the cannon and indiscriminate shootings. Bahadur Shah Zafar, who had escaped by the Yamuna river route to take refuge in Humayun’s tomb, was caught along with three princes. The arrested emperor was brought back to the Red Fort as a prisoner while the three princes were killed by Major William Hodson near Delhi Gate. Bahadur Shah Zafar was tried in the Diwan-i-Khas (Hall of Special Audience) and exiled to Rangoon (now Yangon) on October 7, 1858. 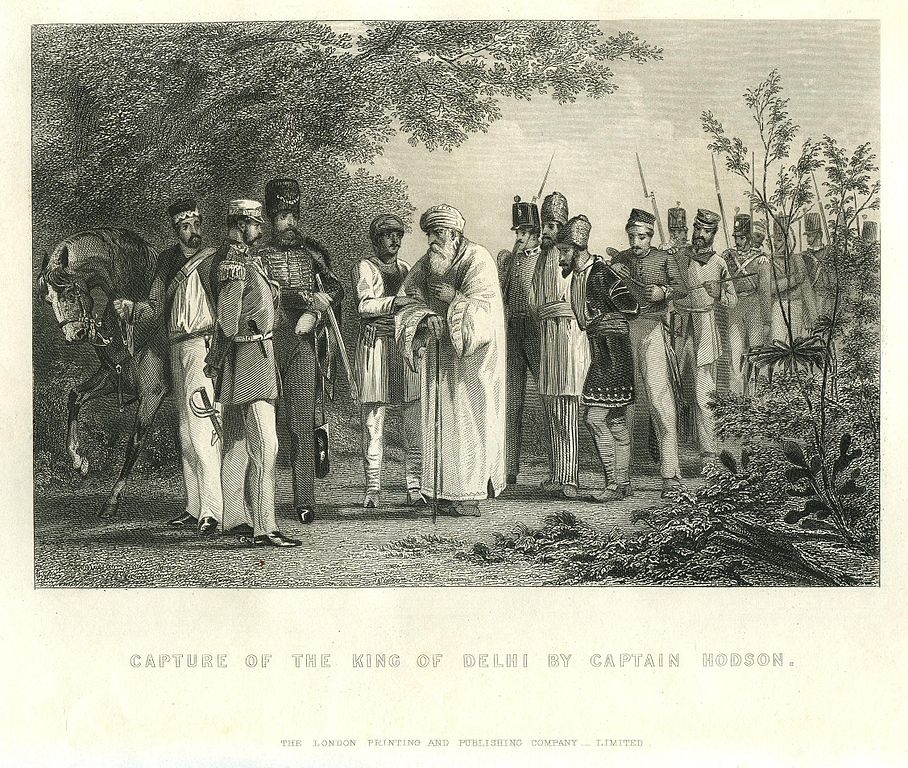 British officials were not just content with deporting the emperor and killing his descendants, they also unleashed their anger on the fort which been the citadel of power during the ‘Great Indian Rebellion’. More than two-thirds of Red Fort’s inner structures were destroyed.  The palace was converted into quarters for the British garrison and the famed Diwan-i-Aam (Hall of Public Audience) into a hospital. The buildings south of the Diwan-i-Khas were allotted to the troops.

Precious stones, jewels and artworks adorning the palaces were looted. Several existing Mughal structures, including the harem courts, the gardens to the west of Rang Mahal, the royal store rooms and kitchen were demolished. British buildings such as army barracks, hospitals, bungalows, administrative buildings, sheds and godowns came up in the former Mughal bastion.

The suppression of the rebellion was accompanied by major administrative changes. The rule of East India Company came to an end and Queen Victoria was made the sovereign head of British India. The office of the Secretary of State was created to rule India.

The new power equations were reinforced by imperial durbars held in Delhi in 1877, 1903 and 1911. The Coronation Durbar of December 1911 also marked the visit of the British King George V and Queen Mary. After the event at the Coronation Park, the royal couple decided to make an appearance from a jharoka (balcony) of the Red Fort on December 13. The jharokha darshan (Audience from the Balcony) was a symbolic appropriation of a practice which only the emperors of Hindustan were entitled to.

The 1911 durbar also saw a surprise announcement – the transfer of British India’s capital from Calcutta to Delhi. Mukherjee points out that the decision to shift the capital to Delhi was also motivated by the symbolic importance of the city and the hold the Mughals had over the minds of the people of north India. 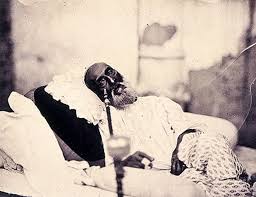 While the British appropriated the imperial symbolism related to the Red Fort, they did everything to prevent any news about Bahadur Shah Zafar coming out in public. Historian Amar Farooqui writes that the exiled emperor and his family lived in complete obscurity till the end of the 19th century, with the colonial state ensuring that no definite account of the Mughal family became available to the public.

Nevertheless, the rebellion and its heroes continued to remain in public memory and later in the nationalist imagination. As Panikkar writes, even in failure, the rebellion of 1857 served as a source of inspiration for the freedom struggle in later decades.

Rangoon, the Indian National Army and the Red Fort

Almost a century after 1857, the Red Fort emerges on the horizon in the years preceding Independence, with the circumstances of the freedom movement in the 1940s rekindling interest in the lives of the seemingly-forgotten Mughal emperor and his family.

Farooqui, however, argues that the choice of the Red Fort as the site for India’s principal public event “was not directly the outcome of a desire to set right, symbolically, the historical wrongs of 1857” – rather it was “indirectly that latent memory of the suppression of the uprising (that) determined the selection of what was the most prominent non-colonial structure in the capital of the British India Empire”.

According to the historian, what triggered this memory in the 1940s was the setting up of the headquarters of the Azad Hind Fauj or the Indian National Army (INA) provisional government at Rangoon in Burma. Subhas Chandra Bose, the ‘Netaji’ of INA reportedly visited the shrine that had come up around the unmarked grave of Bahadur Shah Zafar and his famous call Chalo Dilli (March to Delhi) invoked both the emperor and the Red Fort and was also linked to the idea of the recapture of the fort –”(O)ur task will not end until our surviving heroes hold the victory parade on the graveyard of the British empire, at the Lal Quila, the Red Fort of ancient Delhi”.

Netaji’s intervention, writes Farooqui, played a decisive role in “overcoming the forced collective amnesia about the history of the brutal reconquest of the city”.

The INA trials (1945-1946) put the spotlight on the Red Fort once again. After the Second World War, the captured officers of the INA were put on public trial at the Red Fort in December 1945. Three officers, namely Colonel Shah Nawaz Khan, Colonel Prem Kumar Sahgal and Colonel Gurbaksh Singh Dhillon, were housed there for the duration of the trial. The chambers within the baoli, or step-well, believed to pre-date the Red Fort, were converted into a prison. 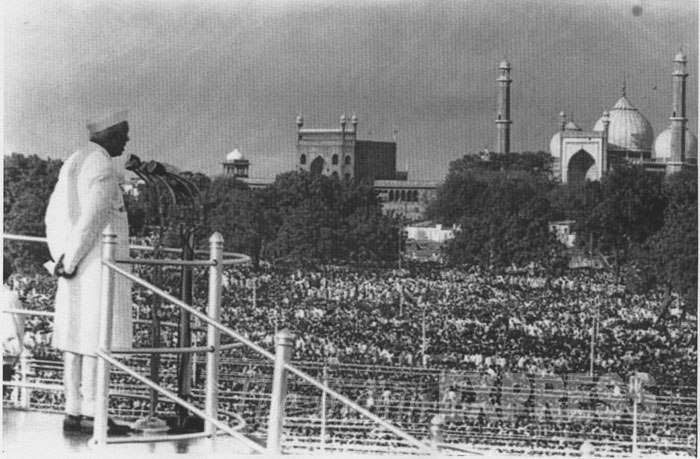 There was a “mass upheaval” of campaigns, protest meetings and all-party demonstrations showing signs of remarkable communal harmony. “Never before in Indian history,” Nehru admitted, “had such unified sentiments been manifested by various sections of the population.”

According to historian Sekhar Bandyopadhyay, there were many factors behind the mass upsurge, including the fact that the trial took place at the Red Fort, which appeared to be the “most authentic symbol of British imperial domination” – it was the place where the last Mughal emperor and the acclaimed leader of the 1857 revolt was tried and exiled.

Farooqui writes that the nation-wide campaign for the release of the INA officers further reinforced the public perception of the former Mughal fort-palace as the symbol of anti-colonial resistance.

Finally, in August 1947, the first Prime Minister of India Jawaharlal Nehru raised the Indian national flag above Lahori Gate. Nehru’s speech made a special mention of Netaji, regretting his absence on the occasion. Farooqui argues that the act of replacing the British flag with India’s national flag, a day after the swearing in of the first cabinet on August 15, amounted to reclaiming this contested site for the nation.

It is a site where the past and the present coalesced to mark a newly independent nation’s step towards the future. On every Independence Day, as the prime minister speaks from the rampart of the Red Fort in what is a formal, choreographed event, the site itself shimmers with the sheen of an inclusive memory, like a talisman.

Shashank Shekhar Sinha has taught history in undergraduate colleges at the University of Delhi. He does independent research on tribes, gender, violence, culture and heritage.