Re-Naming Akbar Road Is About Politics and Hindutva

This re-naming fever is about soft warfare, cultural politics. 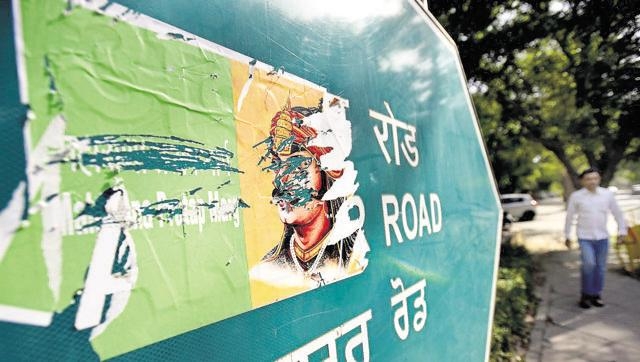 Posters of Maharana Pratab on the signboards on Akbar Road. Credit: Twitter

General Vijay Kumar Singh is a soldier and a Rajput. He has in abundance a soldier’s perseverance and a Rajput’s pride. A soldier is expected by training to do his duty unflinchingly, a Rajput is expected by custom to speed to battle in a cloud of dust and determination, returning only if victorious.

A general must retire when the time comes for him to do so. V. K. Singh has retired from the Indian Army. But no Rajput retires from being a Rajput. Singh is a Rajput forever.

The former army chief’s wish to have New Delhi’s Akbar Road re-named as Maharana Pratap Singh Road has to be seen as a retired soldier’s fascination for military history and an un-retirable Rajput’s untiring Rajput chromosomes.

No one can fault a lion for roaring.

With no war declared, no one bugling him to battle, Singh’s instincts and training have made him turn from the solatiums of the present to the stimulations of the past. He has created a diorama of the battle fought four hundred and forty years ago at Haldighati between Maharana Pratap Singh and Akbar’s army commander Man Singh. There is true passion in the box-scenes, true nostalgia, true kinship. To the former general from the Rajput Regiment, I offer a salute for his miniaturisations of soldierly courage and a khamaghani for the magnifications of Rajput pride.

But the matter cannot be left there. His recommendation has been made as a minister. To another minister. And that, in an official letter. With that the idea goes beyond the cloisters of an individual’s imagining  to the chambers of public office. It makes the suggestion a communication of a minister’s idea, made by him as minister, to another minister who is thought by the ‘sending’ minister to be the right ‘receiving’ minister for that minister’s ministerial action. All this anoints the recommendation with the governmental equivalent of rose-water, which is, the official ink.

Unless withdrawn by him or officially disowned by the union government, his recommendation cannot be taken as an individual’s stray thoughts. It has to be seen as a reflection, howsoever individualised, of this government’s ideological gradient, its historical mount, its political axle.

And those are patent enough.

B.R. Ambedkar gave a now famous message to the All India Depressed Classes Conference at Nagpur in 1942 – Agitate, Educate, Organise. That can be re-worked in Hindutva’s vocabulary as ‘Regurgitate, Resuscitate, Polarise’. Regurgitate old prejudices, resuscitate dying biases, polarise communities. Of these, the first two are about methods, the third is about policy. And the policy is to polarise India first, on religious lines as between Hindus and Muslims and then, on thinking lines as between those who want India to be plural and those who want it to be Hindu-dominated, between those who want India to be liberal and those who want it to be tersely majoritarian. In other words, polarising India between India that is Bharat and India that is Bharatiya, between India that is Hind and an India that is Hindu.

Aurangzeb Road was renamed A. P. J. Abdul Kalam Road, ‘Bad’ Muslim to ‘Good’ Muslim, with a hidden snigger. The call for turning Akbar Road into Maharana Pratap Singh Road, great Muslim to great Hindu, is being made with an open sneer. The first re-naming idea was clever, this one is morbid. The first caused a gasp of astonishment, this stifles the breath of belief.

Akbar is ‘Akbar the Great’ not because he was a great Mughal but because he was, simply, exceptional. In his use of power for creating a nation unified by a moral direction, Akbar ranks with Ashoka and with Ashoka alone. Not just the Hindustan he ruled but the India of subsequent  centuries has recognised him as one who “died as he had lived for many years, a man whose religion nobody could name” –  an ideal condition for the ruler of a country with many religious traditions. Akbar stands at a rare intersection of scholarly esteem and popular endorsement as a figure of national convergence.

His urbane treatment of India’s Hindu majority including his marrying Hindu princesses, doing away with the outrageous pilgrim tax and the appointment of Hindus to the highest possible military and civilian commands can be interpreted as acts of political canniness as indeed they were. But his extension of the same civility to Jains, Parsis and Christians has to have had inner roots in eclecticism. If the Din-i-Ilahi stabilised his throne and burnished his personal image, it also becalmed the country.

Akbar sought to build trust. He tried to win and retain the confidence of his people in his impartiality, his justice. Ashoka erected pillars and carved edicts across his empire to proclaim the Dhamma; Akbar built the Ibadat Khana (House of Worship) in his gardens at Sikri to be used as a discussion hall to debate, in a free and enquiring spirit, questions of religion and theology.

Does Singh not know this? Of course he does. But then he is captive, captive to the ideology of his political party.

Why, four and a half centuries on, should Akbar’s name on a road make him want to erase it? Is pluralism threatening? Is debate unwelcome? Is civility shown by a Muslim a challenge?

Or has it become necessary, urgently necessary now, to further Hindutva consolidation, and here through the great veins of Rajput self-pride?

The answer is patent.

The minister could have asked for a brand new building, flyover or a road to be named after the lion-hearted Maharana Pratap Singh of Mewar. I do not know if Mansingh Road is named after Akbar’s commander or another of the same name. If the former, that name could in some logic though in bad form, have been sought to be renamed but that would not have satisfied their Hindutva. Replacing Akbar’s name on the New Delhi road by that of Akbar’s brave adversary, does. It does so by staging a proxy Haldighati, a diorama battle in which the great Mughal becomes ‘the oppressor’ and the great Rana the liberator, the great Mughal becomes the Muslim and the great Rana becomes the Hindu. It continues Hindutva’s plan to un-ravel, strand by strand, the great weave of India’s pluralism. It continues the self-deluding and India-defeating agenda of Hindu consolidation.

It is not about the person any more. It is about the religion.

Babur Road, Humayun Road, Akbar Road, Jehangir Road, Shahjahan Road have all been placed by road re-namers on a death row. They will all have Maharana Pratap equivalents. Ashoka Road will be a harder case. Unless of course someone suggests that it be re-named Kalinga Marg.

Supporting Singh’s recommendation, a BJP spokesperson has said that road names such as Akbar Road’s should go because they represent India’s oppressors. Imagine, she said, Israel having a road named after Hitler. One can be sure that from ‘the other side’, there will be equally intemperate and ill-tempered howls of protest comparing Hindus to the Nazis, Indian Muslims to the Jewish victims of the second world war.

The re-namings do not have to be done, as they say, ‘actually’. It is enough for purposes of consolidation that they be recommended. Twist the lime-drop into the milk and wait for it to curdle. The khoya can take its own time.  And so, suggest, suggest, recommend, recommend. And do nothing more. Sit back and let ‘them’ fight. The next re-naming tranche could be recommended for places – Allahabad, Aurangabad, Ahmedabad, Hyderabad,  Secunderabad, Nizamabad, Shahjahanabad, Faizabad, Ahmednagar, Fatehpur… And then for cultural signets. Soft power is a phrase of dubious distinction used for another gambit of suspicious intent, cultural diplomacy. This re-naming fever is about soft warfare, cultural politics. If, in Pakistan and elsewhere the beautiful Khuda Hafiz has been sought to be replaced by Allah Hafiz, Hindutva will want to and try to replace Jai Hind! By Bharat Mata ki Jai!. And the simple Namaste with Jai Sri Krishna! to be responded, do not forget, by Radhe! Radhe ! But that will be tough, in Tamil Nadu certainly where, thanks to Periyar and the Dravidar movement, speakers of that classical language, despite all their piety, will not countenance replacing Vanakkam with Jai this or that deity.

Rend, rend, that which time has stitched;  tear , tear what time has darned. And cut, cut what has stayed whole. This is what Muslim bigotry and Hindu consolidation are about.

Sadly, however, for the zealots, and fortunately for India, its people, for Hum Bharat Ke Log or Hum Hind Ki Awam, are just that many, that many too many, and too many too sensible, to be bamboozled by the cultural demagoguery, political roguery and emotional thuggery. We do not want to be good or bad Muslims, good or bad Hindus. We just want to be fortunate citizens, fortunate in the intentions of our rulers, fortunate in their wisdom not their cleverness, in the honesty of their hands not the smartness of their fingers. Our rulers cannot be Ashoka or Akbar. But they can try to be their heirs. Nehru did, Ambedkar did. What did they re-name ? Nothing, certainly not India. They kept that name, adding to it a grand synonym, Bharat. And that is what Rakesh Sharma celebrated, I am sure, when gazing down at the Time-carved peninsula of India from his sky-seat, he answered Prime Minister Indira Gandhi’s question of how India looked from ‘up there’, with ‘Sare Jahan Se Achcha’.

Today’s rulers, in their mundane seat of brief office can never, howsoever hard they may try, ever hope to erase the shape of Hindustan from the name and style India that is Bharat.