Past Continuous: Those Who Think Nehru Was Power Hungry Should Review Events Leading to Independence 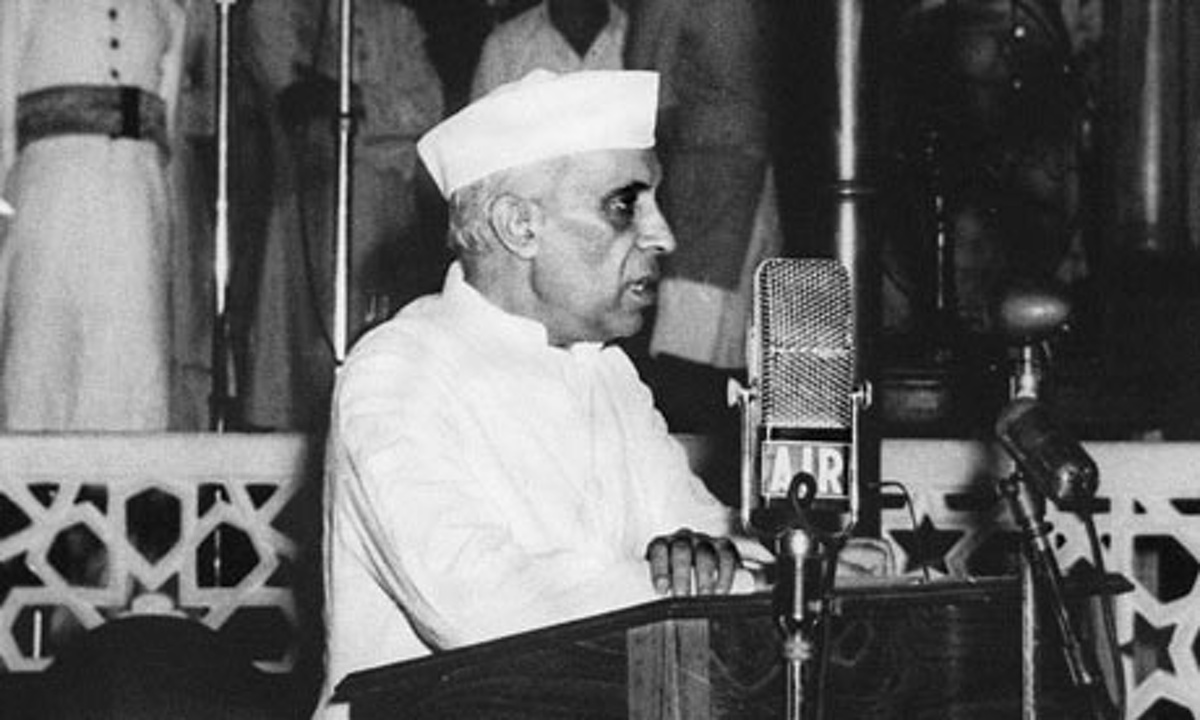 Note: This article was first published on June 7, 2017 and is being republished on November 14, 2018, Jawaharlal Nehru’s birth anniversary.

Some days ago, I came across an accusative headline ‘Jawaharlal Nehru partitioned the country to become the Prime Minister’. The assertion was attributed to BJP spokesperson Sambit Patra. In the pecking order of party hierarchies, a spokesperson is not high on the ladder and consequently this claim should not merit attention. But this particular statement cannot be dismissed as yet another impertinent accusation that enables the bellicose surgeon to earn scorn of his rivals and kudos from party bosses. This incrimination, in fact, provides the kernel of the anti-Nehru campaign that has been waged for long.

The allegation is also indicative, as India heads into celebrating its 70th anniversary of independence, of the nature of attack that would be mounted on him in the coming weeks. Demeaning and demonising Nehru and holding him responsible for partition has been a favourite pastime of the proponents of Hindutva for long. Seven decades after partition, it remains a festering sore on the average Indian psyche and what better strategy can there be than holding an arch rival responsible for this?

Independence and the tragic accompaniment of partition were long-drawn processes. August 15, 1947, would not have dawned on India if it had not been preceded by a series of developments that must be deliberated in totality. The dramatic Quit India resolution by the Congress, Mahatma Gandhi’s electrifying speech and the ensuing nationwide stir, conveyed a clear message to the British government, that its days in the country were numbered. The only issues that remained unsettled during the final years of the Second World War were the logistics of handing over power. Another vexed concern was whether the sub-continent was to be partitioned on the lines that the Muslim League demanded.

While the Cripps Mission in 1942 and the Cabinet Mission in 1946 were explorations to find means to hand over power, the decision to partition India was dramatically announced on June 3, 1947, by the last viceroy, Lord Mountbatten. For long, the evaluation of what resulted in partition has been conducted as historical autopsy with the clear attempt to apportion responsibility to a leader or a group of them.

Gandhi viewed most issues, and adopted his stance, from a moral framework. In contrast, other Congress stalwarts of the time, particularly Nehru and Sardar Patel, paid greater emphasis to necessities of realpolitik. As a consequence, it has been rather easy to paint the duo as power-hungry men impatient to grab political power. For people holding this viewpoint, it has been easy to hold Nehru as much responsible for partition, or maybe to a lesser degree, as Mohammed Ali Jinnah. In fact, barely do a few years go by without a new author or historian coming up with ‘new facts’ to establish Nehru’s complicity, or the absence of it.

Yet, Nehru’s first response to the Mountbatten Plan, which galvanised the process to independence, cannot be ignored. “It is with no joy in my heart that I commend these proposals,” he stated to his party colleagues. In fact, like on most occasions, one cannot but be moved by the tone and tenor of his acceptance of the inevitable. He began on a sombre note reminding party leaders of nine months (beginning with the formation of the Interim Government in September 1946) of “trial and difficulty, of anxiety and sometimes even of heartbreak.”

Nehru further drew attention to the Mountbatten Plan as “an announcement on behalf of the British government” and explained it bluntly as one which lays down “a procedure of self-determination in certain areas of India.” Yet Nehru also emphasised the positive side of the development by highlighting that the Viceroy’s declaration “promises a big advance towards complete independence”.

Without mincing his words, Nehru said he had “no doubt” in his mind “that this is the right course.” Yet he did not hide his grief because “for generations we have dreamt and struggled for a free and independent united India. The proposal to allow certain parts to cede, if they so will, is painful for any of us to contemplate… The united India we have laboured for was not one of compulsion and coercion but a fee and willing association of a free people… We are little men serving great causes, but because the cause is great something of that greatness falls upon us also.”

The last Viceroy’s Plan was the third British initiative within twelve months. The first had been the Cabinet Mission Plan that was in India between March-June 1946. The delegation to India followed the decision taken by the Labour government which assumed power in July 1945 at the end of the Second World War. Aimed at evolving ways to devolve political power, the deputation was mandated to hold negotiations with Indian leaders on the transfer of power. It was also tasked with the objective of forming an Interim Government and examine ways for the drafting of a new constitution.

From the onset the Muslim League was disruptive and exactly one month after the cabinet mission’s return, it called for Direct Action Day, which resulted in the worst ever communal carnage in Calcutta on August 15, 1946. The second plan was Clement Attlee Declaration of February 1947, under which the British government set the deadline of June 1948 for transferring power to the new regime. Simultaneously, the government also appointed Mountbatten as viceroy.

The riots in Noakhali followed by the large scale movement of population worsened the communal situation, and when Mountbatten assumed charge in March, preventing partition of united India appeared a formidable task. The government realised that the Muslim League was just using growing violence as ruse to stay away from accepting any responsibility that would come by joining the process of power devolution. Attlee’s exasperation was expressed even before Mountbatten’s arrival: “Minority will not be allowed to place a veto on the progress of the majority.”

As a result of the prevailing situation, it made little sense for Mountbatten to wait till October 1947 to advise the government on the next step. He realised that the Cabinet Mission Plan of British India remaining united, but categorised into three parts or territories, would never be acceptable to the League. Jinnah had in any case led a hasty departure from the Interim government after delaying joining it. Jinnah had made it clear that he would settle for nothing but a sovereign nation.

Consequent to this, Mountbatten decided to present a proposal that would accept both demands of the League and the Congress. To Jinnah, he granted the idea of a new nation, Pakistan partitioned out of India. To Nehru and other Congress leaders, Mountbatten presented a plan that respected its insistence for unity.

While all of British India was not to be part of independent India, Pakistan was made as small as possible, and Punjab and Bengal were partitioned. Mountbatten also did not accept Jinnah’s insistence for an eight hundred mile corridor across. Jinnah realised the ploy, for he declared: “We cannot say or feel that we are satisfied or that we agree with some of the matters dealt with by the plan.” But there was little he could do for Mountbatten had made an offer he could refuse only with immense risk to his political future.

Moreover, Mountbatten was also unwilling to hang on to power because of worsening of communal violence. On its last legs in office in India, the British were eager to dodge the responsibility of having contributed to the aggravated communal situation. Congress leaders accepted the plan and even if they baulked at the short time-frame of just seventy two days between June 3 and August 15, it would have been difficult to seek pushing the date back and explain their reluctance to the people.

Once Mountbatten had come up with the proposal to dissect united India, there was no looking back. The orgy of violence in Punjab especially, which occurred alongside independence, and the delay in announcing the award of the Boundary Commission, added to the tragedy which was unfolding. August 15 was as much a day of great joy as of immense suffering. India’s independence was as much a success of Nehru’s foresight, as much as it was of his limitations. Accusing him of acquiescing to partition because he aimed for political power demonstrates that the Sangh Parivar’s understanding of the complexities of the period have not progressed since 1947.

Even after India became independent, its Sarsanghchalak, Madhav Sadashiv Golwalkar remained delusional. To a query by a swayamsevak at an RSS meeting he stated: “Do you believe that the British will quit? The nincompoops in whose hands they are giving the reins of government will not be able to hold on even for two months. They will go crawling on their knees to the British and ask them to kindly return.”

If the seventieth anniversary of India’s independence becomes an occasion to paint India’s national leaders as power hungry and facilitators of partition, it would be worthy to examine how historical icons of these accusers looked the other way when the Indian people were confronting British might.