Khadi poppies and marigolds commemorate the sacrifice of Indian soldiers in World War I. 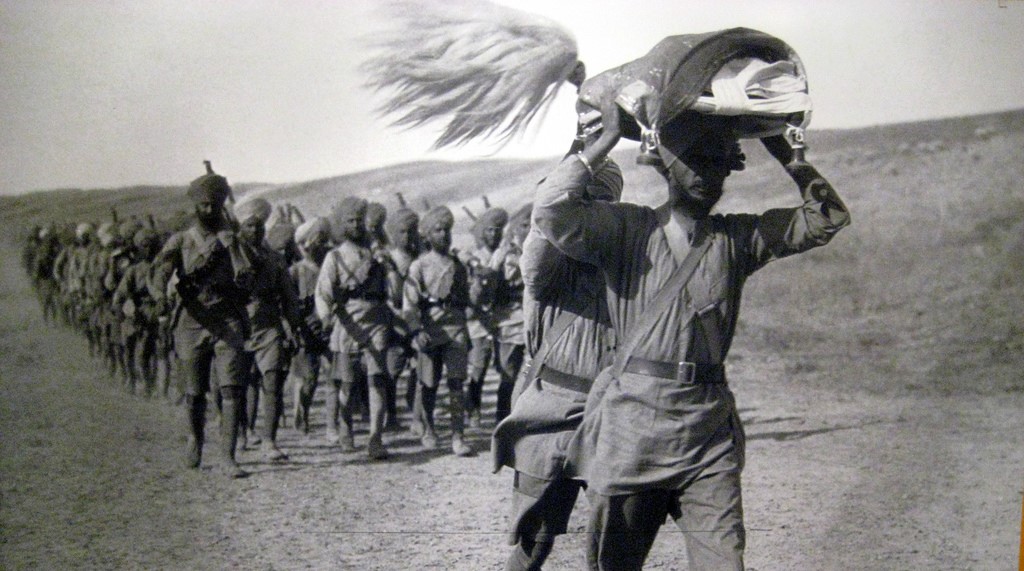 Sikh Regiment of the British Indian Army in Mesopotamia during World War I, being led by Guru Granth Sahib.

Until four years ago, virtually nothing had been done in either Britain or India to recognise the sacrifice of more than 74,000 Indian troops who died fighting in World War One. Also ignored was the vital role played in almost all the theatres of the conflict – Europe, the Middle East and East Africa – by the total of more than 1.3m servicemen from what was then undivided India.

This was scarcely mentioned in 1964 on the 50th anniversary of what was dubbed a “white war”, later becoming known as “India’s Forgotten War”, even though the Victoria Cross (Britain’s highest military award) was won by eleven Indian soldiers. In the UK, red khadi poppies mark that change at the end of four years of events tracing the history of a terrible war. Some 40,000 khadi poppies have been distributed alongside the traditional British Legion paper poppy.

Khadi is the spun cotton cloth identified with Mahatma Gandhi, who not only led India’s independence movement, but in 1914 encouraged Indians in Britain to volunteer for service.

The poppies were launched in London’s Trafalgar Square last Sunday during annual Diwali festival celebrations that mark the triumph of good over evil.

Theresa May has said she would be interested in wearing a khadi poppy during the events, though she had a traditional poppy at the Cenotaph ceremony in London on November 11.

In Delhi, Tom Tugendhat, chairman of the British parliament’s foreign affairs committee and a former army officer, yesterday presented leather-bound (and electronic) copies of war diaries to colonels of 26 Indian regiments that were involved. Today he attended a multi-faith ceremony of remembrance at the city’s war memorial – a contrast with the Christian orientation of most other events around the world.

The increased interest, even determination, in the UK and India to commemorate the contributions and sacrifice reflect changing attitudes over the years. In 1964, Britain had not moved on sufficiently from its colonial past to commemorate the contributions of its old territories, and India did not have the post-colonial self-confidence to assert its military history (it had been defeated two years earlier in a brief war with China).

India has also moved on from deep resentment, which would still have existed in 1964, that Britain did not acknowledge India’s contribution to the war effort by awarding it some form of autonomy, or at least the sort of dominion status of Australia and Canada.

“Many Indians volunteered in the expectation that one good deed would lead to another, that Britain would end the colonial Raj,” Tugendhat said in Delhi, acknowledging the history. “When those hopes were dashed, India’s sacrifice in the war became an awkward and painful subject, which both countries preferred to ignore. Meanwhile, the generation who fought in the war grew old and died, taking their stories with them. And India’s immense contribution went largely unrecognised”.

During a march past of Indian troops, a woman pins flowers on to the tunic of one of the soldiers. Credit: Imperial War Museum archives

Now India is asserting itself internationally as a growing economic force in contrast to the UK’s probable-post-Brexit future and declining military capability. With its Bharatiya Janata government, India also has a nationalistically proud party in power.

Those who volunteered were mostly desperately poor and uneducated. There were Hindus, Muslims, Sikhs, and maybe other religions as well, but they were all fighting in a war that was seen by both sides as being blessed by Christ. An American Baptist leader, Samuel Batten, even called the war “a continuation of Christ’s sacrificial service for the redemption of the world,” as the Wall Street Journal has reported. German theologians endorsed a letter by prominent intellectuals that declared Kaiser Wilhelm II’s war policy a defensive necessity.

“The soldiers came from the length and breadth of undivided India, from the Punjab, Garhwal, the North West Frontier, Rajasthan and Nepal to Madras and Burma and represented different religious, ethnic and linguistic backgrounds. Most of the sepoys, flung into the greatest war of the century, were from peasant stock and hill tribes,” says Shrabani Basu, a journalist and author, in For King and Another Country: Indian Soldiers on the Western Front, 1914-18. Indian soldiers serving with the British Army, at camp during World War I, circa 1916. Credit: Getty Images

Scarcely any would have previously travelled abroad, or even dreamt of ever leaving their home areas. When they arrived for battle, they had scant clothing for the cold climate and inadequate shoes. They were given weapons they had never used before, yet they were quickly sent into action and played a leading role in some key campaigns

“Less than four weeks after landing at Marseilles, the Indian troops were thrown into the First Battle of Ypres against the world’s best-equipped army,” says Basu. “They went into the trenches still in their cotton khakis, soon to face one of the harshest winters they had ever seen….They faced the first gas attacks totally unprepared and without any equipment”. The recruitment drive carried on through the four years of the war – as late as spring of 1918, 100,000 Indians were needed to fight in Turkey.

The motives of the volunteers varied. Some maybe had loyalty to the King Emperor, though not as many as a BBC presenter would have liked when a programme on the war was being recorded in Delhi in 2014. It became clear this was not an empire’s “patriotic army”, as one speaker put it.

For most, it would have been the attraction of wages in cash that could be sent home plus a uniform with tough shoes – and loyalty to their villages with forceful leadership by local headmen. The natural loyalty and bonding of a soldier with his regiment, plus the pride of going off to war and the respect that would be earned back in the villages, all contributed – though there were desertions and mutinies. Indian infantry in France with an early version of gas masks.

The launch of the khadi poppy was marked at an event hosted by the South Asia Centre, London School of Economics where Lord Gadhia, a British peer of Indian origin, explained how the campaign had developed. Noting the contribution made by the Indians to the war effort, Gadhia said that David Lloyd George, the war-time British prime minister, had said that if the Indians “had they stayed home, the world would have taken a different course”.

In India, the marigold – the traditional flower for celebrations and commemorations – has been selected by  the United Service Institution of India as a symbol of remembrance.

The British government has announced plans for three six-foot statues of soldiers to be erected at the Foreign and Commonwealth Office in London to honour the sacrifices made by a total of over 3m Commonwealth soldiers, sailors, airmen and labour corps from the Caribbean, Australasia and Canada, along with what is now India, Pakistan and Bangladesh, who served in the war.

Basu records how enthusiasm was turning to despair by the first winter. “No one who has ever seen the war will forget it to their last day,” wrote one soldier. “Just like a turnip is cut into pieces, so a man is blown to bits by the explosion of a shell… All those who came with me have all ceased to exist… There is no knowing who will win. In taking a hundred yards of trench, it is like the destruction of the world.”

The tragedy is that while the Armistice commemorations have been in progress, there has been no armistice in the world’s current conflicts. On India and Pakistan’s Line of Control (de facto border) in Kashmir, an Indian soldier was killed by sniper fire yesterday and the day before an army porter was similarly shot.

John Elliott is a Delhi-based journalist who writes the blog ridingtheelephant.wordpress.com.

This essay has been republished, with permission, from the author’s blog. Read the original here.