Netaji's Birth Anniversary: Time to Rededicate Ourselves to Achieving Social and Economic Freedom

Netaji's vision of India was one where all of its many, varied communities would enjoy basic human rights, good health, literacy, decent employment, and live together in peace and harmony. The 121st birth anniversary of Netaji Subhas Chandra Bose on January 23, 2018, is a time for celebrating the life of a man who dedicated himself to the struggle for freedom for India from British imperialism. To my mind, it should also be a time to examine where India stands today in the light of what Netaji had envisioned for Free India. He had famously said – I want not only political freedom but also social and economic freedom.

India finally achieved full political independence on January 26, 1950, when it became a Republic, but what about social and economic freedom? Though the caste system was formally abolished under the constitution of India, we still continue to suffer from the curse of casteism. Political parties of all hues resort to caste politics to gain votes.

Extreme poverty among significant sections of the Indian population make a mockery of the rising gross domestic product. Cases of suicide among farmers unable to feed their families and drowning in debt are reported frequently.

Women still suffer from all types of exploitation and disadvantages flowing from a patriarchal society. Worse still, women are being persecuted, raped and killed in many parts of India, often from the Dalit and Tribal communities. In the name of the Hindu religion, dreadful atrocities are being committed.

Let us recall today the vision that Netaji had for his beloved motherland and the political, social and economic reconstruction that he felt was sorely needed for India to emerge out of more than a century of servitude and impoverishment.

During his early imprisonment in Mandalay Jail in Burma (1925-27) when Netaji was in his 20s, he wrote in what he called his first book Pebbles on the Seashore:

By national movement I mean a movement affecting all the spheres of our social and collective life and all the sections of our community. We want a renaissance in our collective life or rather a neo-renaissance. The creative spirit must set to work in the spheres of poetry, music, literature, painting, sculpture, history as also in our social, religious and commercial life. Society must be purged of narrowness and inequality. Religion must be freed from bigotry and superstition. The Indian business community must grow into a healthy self-conscious and public-spirited body corporate. In the domain of culture we want genuine poets, painters, sculptors, historians, philosophers, economists imbued with the spirit of scientific research and endowed with a real creative talent. Then alone will India be able (to hold) her own in the sphere of culture and science among the savants of the world.

Though this image of India on young Netaji’s mind may seem overly idealistic and almost impossible to reach, it certainly gives us all an inspiring model to aspire to if we want real greatness for India.

Also read: ‘We Live in Times When National Integration Has Been Replaced By Ugly Nationalism’

Netaji placed paramount importance on education. As the chief executive officer of the mayor of Calcutta, Deshabandhu Chittaranjan Das, Netaji wanted to establish free primary education for all. He believed that basic education should be grounded in one’s own national and cultural context, which would then prepare students for higher education in a wider international environment. Subhas himself had his schooling and college education in Cuttack and Calcutta before he went to Cambridge University and was ranked high in the Indian Civil Service (ICS) examination, an office which he, of course, declined as he ‘could not serve two masters’. India’s call prevailed over what would have been a comfortable and secure career path for this brilliant and promising young man.

Today in India while there are centres of excellence at universities and institutions of higher learning, the quality and outreach of basic education, especially in rural India is dismal indeed. According to a recent Annual Status of Education Report (ASER) carried out in 28 districts across 24 states, one-fourth of the students are unable to read their own language fluently, while 57% of them struggle to solve a simple sum of division. These findings clearly show that school education in India suffers from serious systemic lacunae. The report further claims that with more than a million youth joining the workforce every month, poor education standards mean that many of them will not be employable. 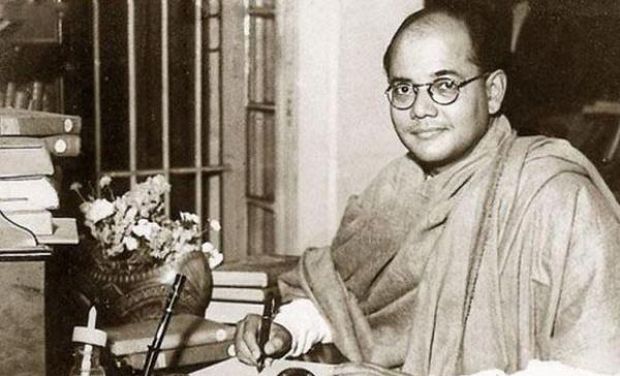 As with incomes, the educational divide in India is enormous and unjust, leaving huge numbers of potentially promising children and youth out of any development dividend. India of the 21st century has left too many of its citizens without access to basic education, healthcare, employment opportunities, a decent standard of living and hope.

A lot is being said about nationalism these days. Playing of the national anthem at cinema halls is being upheld to promote a nationalistic spirit among the masses. While jingoism comes to mind in observing many of the actions of the ruling regime, militant nationalism can easily spiral out of control.

What did Netaji – Gandhi’s ‘patriot of patriots‘ – have to say about nationalism?

Postulating about the nature of patriotism and Indian nationalism Netaji wrote:

The nature of patriotism – there must be the identification of one’s life with the mainstream of India’s history. The realms of national life and of individual life must be merged completely. Any suffering of any nationality in India must be felt as one’s own suffering, any glory as one’s own glory. Every single invasion of India must be looked upon as an event in one’s own life. All those who have accepted India as their motherland or all those who have made India their permanent home are my brothers. The temple of Lord Jagannath in Puri and the Taj Mahal are equally objects of my pride. The internecine disputes and quarrels that have taken place between different nationalities and religions in India have been like quarrels within a family – quarrels that come to an end with maturity. Toleration is not a characteristic of childhood; children frequently quarrel. The new nation of India is now in the phase of its childhood – we do not therefore practise toleration. The day will come when conflicts between the Hindus and Muslims will end much in the same way as conflicts between the Roman Catholics and Protestants have ended.

Those who are seeking to flag their brand of nationalism must look to Netaji’s concept of love of one’s country. Genuine nationalism must embrace all those who have made India their home. Tolerance of differences in terms of ethnicity, caste, gender, religion is the ultimate sign of maturity for a people and a nation.

In the final battle for Indian independence fought on the Indo-Burma frontier during 1943-44, Netaji, as the head of the provisional government of Azad Hind and the Supreme Commander of the Indian National Army, demonstrated how Hindus, Muslims, Sikhs and Christians could all unite under one banner and one slogan – Unity, Faith and Sacrifice. Arguably, if Netaji had returned to India there could have been a united India, a formidable nation in resurgent Asia.

The best tribute to this man of destiny on his birth anniversary will be to re-dedicate ourselves to building India in the image that he envisioned and worked for throughout his life.

The Bose Legacy Foundation (2017) has been set up to spearhead such efforts. It seeks to promote the legacy of the Bose Brothers – Sarat Chandra Bose and Subhas Chandra Bose – icons of freedom, justice and equality. It aims to give practical expression to their ideals and what they stood for. Their vision of a new India was one where all of its many and varied communities and peoples would enjoy basic human rights, good health, literacy and decent employment, and live together in peace and harmony. In particular, the Foundation will provide support through local partner organisations in basic and further education, healthcare and general well-being of vulnerable children left behind and locked in poverty – those on the streets, those who are abandoned and those who are lost.

(Netaji’s writings have been translated from Bengali, Pebbles on the Seashore)

Madhuri Bose is Netaji’s grand-niece and author of The Bose Brothers and Indian Independence: An Insider’s Account, SAGE India, 2016.