Maham Anga's death prompted an attempt on Akbar's life, but the patriarchal nature of written history did not find it worthy to attribute such influence to a woman. A depiction of the attempted assassination of Akbar . Credit: Akbarnama, Victoria Albert Museum. 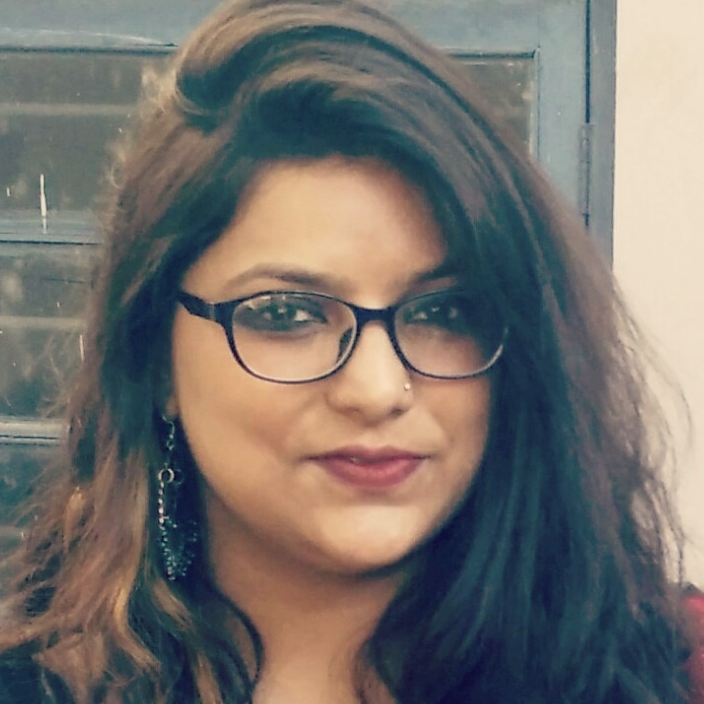 One evening in 16th century Delhi, the air was suddenly filled with shouts of panic. They were coming from the crossing just outside the madrasa of Maham Anga. An attempt had been made to assassinate Mughal emperor Akbar, who was was returning from a visit to the dargah of Hazrat Nizamuddin. An arrow had pierced his right shoulder.

In the bazaar outside the madrasa, shopkeepers were in a state of frenzy, trying to escape the scene as the emperor’s guards searched for the culprit, smashing any items in their way. The public looked on from a safe distance at the unfolding events.

In no time, the man who shot the arrow from the balcony of the madrasa was caught and brought before the wounded emperor. The courtiers suggested that he be interrogated, but Akbar ordered his immediate execution. Akbar was safe, but the aura of the Mughal empire was shaken. The culprit was a slave of Mirza Sharfuddin, a noble in Akbar’s court whose rebellion had recently been curbed. While the attack – which reduced the emperor to a mortal – may have been executed on Sharfuddin’s orders, its roots lay elsewhere.

The origin of that evening’s events can be traced back to when Maham Anga, Akbar’s foster mother, became the sole power holder in the Mughal court following her ousting of Bairam Khan, Akbar’s tutor who was the de facto ruler during the early years of his reign, from the political scene. She had convinced Akbar that in Bairam Khan’s presence, he would not be able to exercise authority. The power was then appropriated by Anga, who can be seen in artistic depictions of Akbar’s court, conducting the affairs of the state sitting next to the emperor. 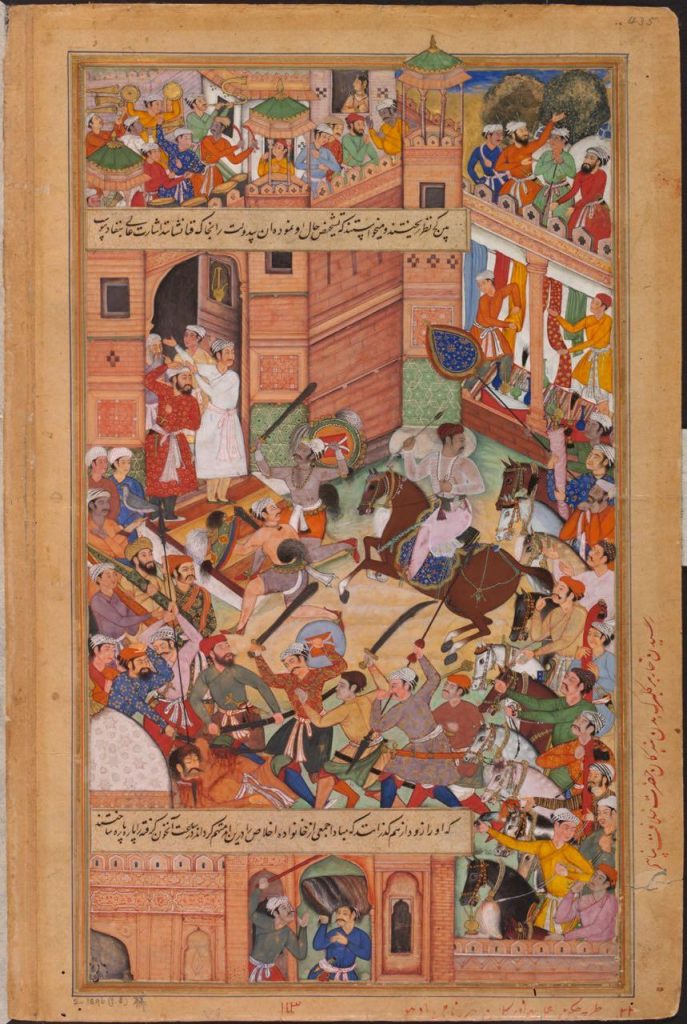 Depiction of the assassination attempt on Akbar near the madrasa of Maham Anga. Credit: Akbarnama, Victoria Albert Museum.

The fact that a woman exerted such power made certain factions envious of her. In theological discussions as well as political ones, her power was questioned. Abdul Qadir Badauni, an important historian and theologian during Akbar’s reign, recorded that Mir Abdul Hayy had quoted a hadith (prophet Muhammad’s sayings), that when women, boys and eunuchs would govern, it is a sign of approaching doom. Badauni mentions this tradition in his work just after describing the appropriation of power by Anga and her son Adham Khan. It seems to be a direct comment on Maham Anga (the woman), Adham Khan (the boy) and Itimad Khan, their trusted eunuch. 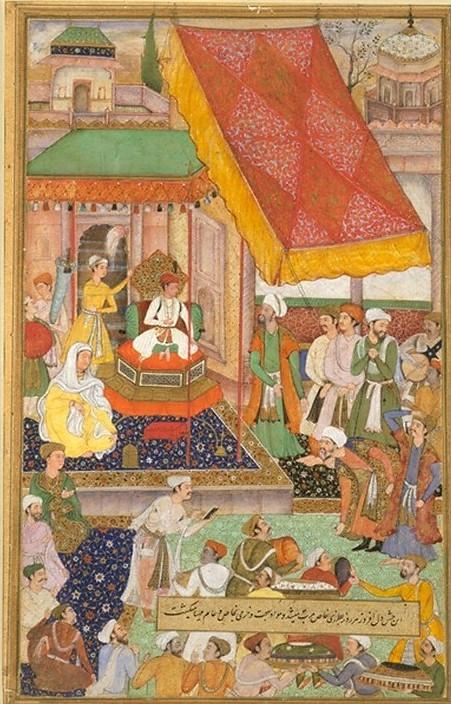 The patriarchal society could not – and still cannot – tolerate a woman wielding such power. This is also why historians described Anga’s reign as a ‘petticoat government’ (for the record, Mughal women didn’t wear saris!). Under this narrative, the defining feature of a woman is not a personality trait, but a sexualised piece of cloth. Powerful women in history have always been unfairly recorded in their own times and unfairly written about in later times. Modern writers also view the past with a patriarchal lens, despite the fact that the past might not have a similar consciousness regarding gender as the modern world. Even though the idea of masculinity was glorified in the past, women still had the scope for social mobility, which is why Maham Anga could wield such authority.

Her downfall began during the Malwa campaign of her son Adham Khan, who mishandled the war booty. Any animosity that may have developed between him and Akbar was only intensified when Adham Khan murdered Atka Khan, the emperor’s beloved foster father. An enraged Akbar flung Adham Khan down his palace stairs, killing him. He also revoked the favours bestowed upon Anga, who died 40 days later in grief and pain.

Maham Anga was not a tragic mother torn apart by the animosity between her real and foster son. She was a politically well-connected, influential woman. It was after her death that Mirza Sharfuddin revolted against Akbar and retreated to this jagir (land grant) of Ajmer and Nagaur.

Contemporary writers did not provide any reason behind the revolt. Or perhaps, they did not wish to acknowledge that the loyalty of certain nobles lay with Maham Anga. After her death, the nobles who had been under Anga’s umbrella were insecure. It was for this reason that Sharfuddin ordered the assassination of the emperor.

This brings to light a contradiction between the social reality of Akbar’s time and the attitude of chroniclers towards certain social sections, including women. 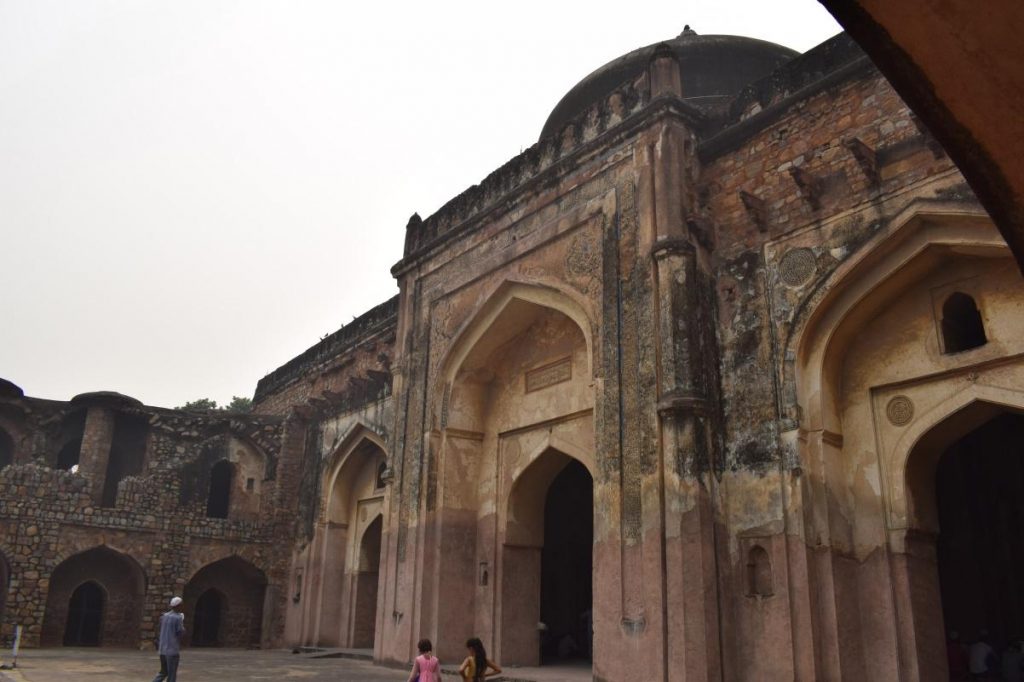 There are two varying accounts of the assassination attempt. The main element of the episode is the location: the madrasa of Maham Anga, now known as Khairul Manazil, which stands just opposite the entrance of Purana Qila. The madrasa was run by Maham Anga and her followers.

In the two accounts, one of Abul Fazl and the other of Abdul Qadir Badauni, the motive is disputed. According to Abul Fazl, the arrow was shot by a man standing near the madrasa.  The man, he adds, was a slave of the rebel Sharfuddin’s father, and thus indirectly attributes the rebellion as motive for the attempt. Badauni also records that the man was standing at the balcony of Maham Anga’s madrasa and that he was Sharfuddin’s slave. But he says the reason behind the attack was the disparate nature of the emperor’s matrimonial alliances with the zamindars of Delhi. Badauni displaces the political nature of the attack and places it in a dimension where Akbar’s actions were the reason.

Neither mention Anga’s role, but Abul Fazl’s narrative provides scope for reconstruction of a long series of interconnected events which begin with her death. Badauni leaves no scope for any such reconstruction. Ironically, the highest point of Maham Anga’s power wasn’t during her lifetime. It was for her cause that an attempt was made on Akbar’s life, interestingly, with her madrasa as the backdrop.

When seen through the eyes of biased historians, social realities can be misleading. A little digging can unearth the true nature of social conditions. When women of Mughal India exercised power, it invoked fear and dread in many. Maham Anga was a politically motivated woman who exercised immense authority with the help of her loyals. Her fall from power, like that of Bairam Khan before her, was part of a process of Akbar realising his own potential.

Her faction retaliating for her death seems logical, yet historians – both Akbar’s contemporaries and later ones – did not find it worthy to mention that a woman was the reason for an attempted assassination of the great emperor Akbar.

Lubna Irfan is a research scholar at the Centre of Advanced Study, department of history in Aligarh Muslim University.