An Enduring Mystery on Everest: The Story of Mallory and Irvine

On June 8, 1924, they climbed into the unknown on a route no human being had ever trod since Mount Everest was created. 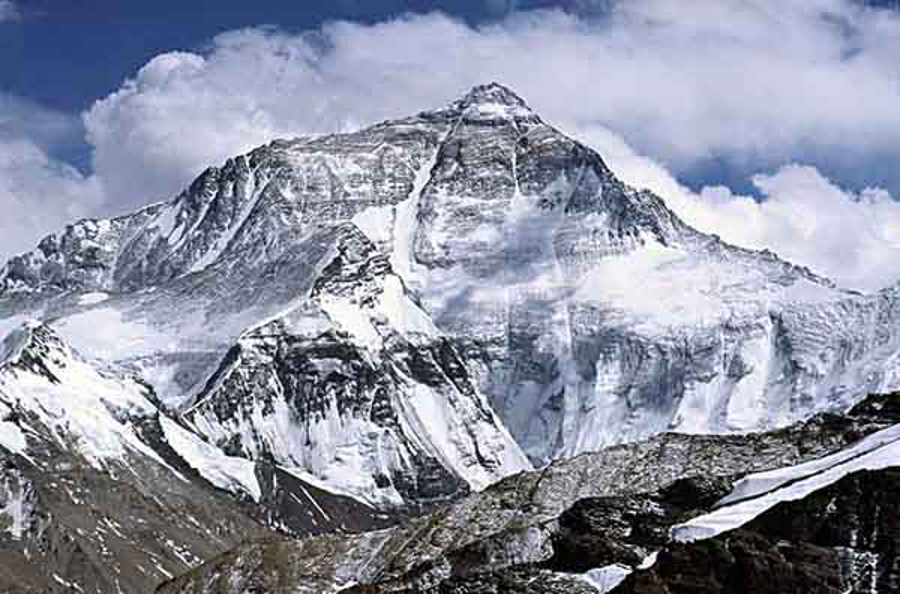 Everest from the North with Changtse in the centre foreground, the North Ridge above at left and the rising Summit Ridge with rock-steps at top. Courtesy: Authors

“We are going to sail to the top this time and god with us, or stamp to the top with the wind in our teeth.”
∼ George Mallory in a letter home

On June 8, 1924 at 8,140 metres, it must have been a cold dawn on the icy heights of the north ridge of Everest. Two British climbers; one a lecturer in the Extra Mural Studies at the University of Cambridge and the other a strapping young man, a student of engineering at  Merton College at Oxford University, stepped out of their tiny two-man tent, closed the flap, secured it, and donned the heavy oxygen apparatus. Turning towards the summit of Mount Everest, they climbed into the unknown on a route no human being had ever trod since Mount Everest was created.  That climb turned into an enduring mystery, an epic and a legend. But really who was Mallory?

George Leigh Mallory was born on June 18, 1886 in Mobbelery, Chershire in England to a clergyman. George had two sisters and a younger brother who later on was to command the Allied Air Armada in Overlord in 1944 as Air Marshal. George too had served on the battlefield of Somme in the First World War as an artillery officer and had seen the terrible carnage that engulfed that entire generation.

The early British Everest Expeditions themselves grew out of an off shoot of the great game that developed on the Asian chess board between the British and the Russian Empires. The impetus and credit for the early British expeditions to Mount Everest must surely go to Sir Francis Younghusband. At the ripe young age of 24, Younghusband had already become a veteran explorer. He, after being granted leave by the Commander in Chief Lord Roberts, explored the Himalayan watershed. He crossed across the Taklamakan Desert to Chinese Turkestan, pioneered a route from Kashgar to India through the yet unchartered Mustagh Pass. He informed the then Viceroy, Lord Dufferin about his crossing of the Karakoram Range, the Hindu Kush, and the Pamirs, virtually the areas where three empires met.

Later he led an expedition to Tibet in 1904, which finally paved a way for the early British forays in the region and of Everest itself. Sir Francis after the First World War chaired the Mount Everest Committee in 1921 which was set up to coordinate and conduct the British Reconnaissance on Mount Everest later that year. George Leigh Mallory was chosen as one of the key members of the reconnaissance team.

In many ways the 1921 British Expedition was extraordinary. It was the first time that any human beings would be trying to step in the close vicinity of Chomolungma, the highest mountain on planet earth. As they neared the environs of Everest from Kampa Dzong a sense of great anticipation swept up to Mallory.  To Winthrop Young he wrote, ‘we are just about to walk off the map…”

His first proper view of Everest was something he would never forget. To Ruth, his wife he described it vividly, “suddenly our eyes caught glint of snow through the clouds. A whole group of mountains began to appear in gigantic fragments. Mountain shapes are often fantastic seen through a mist. These were like the wildest creation of a dream. A preposterous triangular lump rose out of the depths; its edge came leaping up at an angle of about 70 degrees and ended nowhere. To its left a black serrated crest was hanging in the sky incredibly. Gradually, very gradually, we saw the great mountain sides and glaciers and arêtes, now one fragment and now another through the floating rifts, until far higher in the sky than imagination had dared to suggest the white summit of Everest appeared.”

There is no doubt that Everest had cast a spell on the man.

Lead by Howard-Bury, the expedition was largely a surveying effort. For the attempt on the summit though a route had to be first identified. The base camp was established on the Rongbuk glacier in late June at 5000 metres and from there much of the exploration was done regarding documenting the various glaciers and lesser peaks in the vicinity of Everest.

The expedition achieved its objectives; survey and map the Everest region and explore the mountain from the north, east and up to the edge of the west. Mallory invariably led the way in exploring the mountain while Oliver Wheeler from the Survey of India meticulously surveyed the region. Ironically it was Wheeler who discovered the approach route to North Col and to the now standard route to Everest from Tibetan side through the East Rongbuk Glacier. Mallory missed it, even though he had seen the East Rongbuk Glacier.

However, Mallory did everything else; opened up the approaches to Everest from the beautiful Kharta valley, seeing the stupendous east face of Everest, identified the route up the north col and also looked into the Western Cwm and the southern route. He opined that the southern route would be a difficult climb.

The 1921 exploration logically led to the next expedition with an aim to climb Mount Everest in 1922. By then the East Rongbuk glacier’s importance was realised and immediately utilised to advance via lesser camps to Advance base camp below the North Col, a 300 metre high ice walled saddle between Everest’s north ridge and Changse until Camp IV was established on the North Col itself. The team also included George Finch, who was to pioneer the use of oxygen, the ‘English air’ as the Sherpa would call it on the mountain. 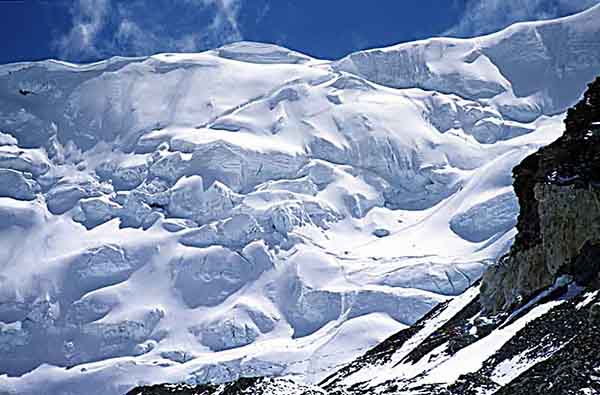 The 300 metre high North Col and the site of Camp 4, saddled between the North Ridge of Everest and Changtse. Photo: http://www.paesieimmagini.it/Everest/Imm_Everest/_Colle_Nord.jpg

This expedition’s aim to reach the summit employed two different approaches; a classical alpine style attempt sans oxygen apparatus and a new style with oxygen equipment based on the high-altitude flying research from recent years. The North Col was reached by Mallory and Howard Somervell on May 11.

By May 20, the first attempt on the summit was made in classical style with Mallory and his colleagues who by this stage were weary from the struggles in establishing camps and battling the weather as well as their own failing health in this harsh environment. Nonetheless, after rising at 5:30 am they finally departed at 7 am and established Camp V at 7,600 m that day. The next day, after rising at 6:30 am, Mallory, Somvervell and Edward Norton struggled up the north ridge to 8,225 m by 2 pm before turning around with an altitude record.

Next was the attempt with oxygen apparatus as advocated by the Australian, George Finch. With few fit men available, Finch departed with Geoffrey Bruce and a Gurkha, Tejbir on May 25. They reached 7,460 metres from their Camp V and finally departed on May 27 using oxygen. Tejbir gave up at 7,925, but Finch and Bruce did reach a new record of 8,325 metres but could go no further due to Bruce’s equipment failing. How far they could have climbed is open to debate but the climb gave Mallory a new perspective about reaching the summit of Everest.

The 1922 expedition in some sense can be compared to the first human foray into space where every step had an unknown outcome. The 1922 expedition had many firsts to its credit; the identification of the North East Ridge route with its two rock step obstacles on the ridge of which so much was to happen later and the first use of oxygen high in the “death zone”.

The next expedition launched in 1924 was a culmination of the efforts initiated in 1921 and incorporating the lessons learned from the previous expeditions. Mallory, now 37 years of age knew that his time was running out and was prepared to give all that it took for the summit. He had a premonition of the outcome between him and the mountain and ventured that perhaps he was not coming back from the attempt.

This expedition was beset with bad weather in May and Mallory’s attempt was aborted early. Finally, Edward Norton and Somervell made a summit attempt on June 4 where Norton alone reached 8,572 metres after crossing the Great couloir before he abandoned the attempt. That was an epic climb without oxygen and a record reached which was broken after five decades in 1978 by Reinhold Messner and Peter Habeler.

Mallory chafing on the North Col in the meanwhile had decided that there would be one last attempt on the mountain. It would be made by him and young Irvine and they would use oxygen. Destiny it seemed beckoned Mallory as he probably did not relish a prospect of coming down the mountain without the summit.

Thus, on June 8 in the final throw of dice, Mallory, now with a new climbing partner in Andrew (Sandy) Irvine, departed from Camp VI, likely at or before dawn.

Their support climber Noel Odell at 12:50 pm had just climbed to about 8,000 metres. 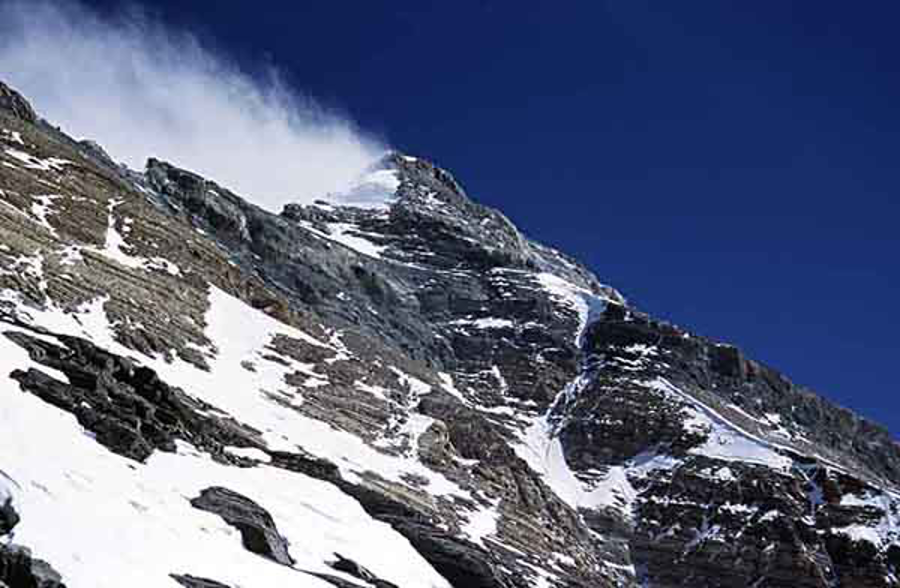 Summit Ridge with the jagged 2nd Step (8,610 metres) prominent at left and final pyramid with summit (8,850) above.

Pausing for a rest, he looked up towards the summit ridge. Odell then described what happened;

“There was a sudden clearing in the atmosphere, and the entire summit ridge and final peak of Everest were unveiled. My eyes became fixed on one tiny black spot silhouetted on a small snow-crest beneath a rock-step in the ridge; the black spot moved. Another black spot became apparent and moved up to join the other on the crest. The first then approached the great rock-step and shortly emerged at the top; the second did likewise. Then the whole fascinating vision vanished enveloped in cloud once more.”

That was the last time anyone ever saw Mallory and Irvine alive. They perhaps were within three climbing hours from the summit of Everest. In tweed jackets and hobnailed boots with only a rope between them they were last seen going strong for the top.

What happened to them is still a mystery.

Ajay Dandekar is a Professor in the Department of History, School of Humanities and Social Sciences, Shiv Nadar University, Delhi NCR. He can be contacted at ajayd16@gmail.com.

Philip Summers is an Australian researcher, historian and writer with a particular interest in the early British Pre-War Everest expeditions and the Soviet/Russian Space programme to the present day. He can be contacted at everest1924@mail.com.