The Hanumangarhi incident (AD 1855-56) could be a helpful reminder to the people of Awadh that sectarian and communal divides – between Shi'a and Sunni as well as between Hindus and Muslims – can be avoided for a larger cause and to maintain the ideals of co-existence and plurality.

The Hanumangarhi temple in Ayodhya was a site of communal dispute between Hindus and Muslims in the mid-19th century. Credit: Lionel Viroulaud/Flickr CC by 2.0

In the immediate aftermath of the demolition of the Babri Masjid at Ayodhya on December 6, 1992, the district administration had totally collapsed, leading to the imposition of a curfew. It was in the wake of the curfew that Mahant Ramchandra Pramhans Das, the chief of the Hanumangarhi temple, saw to it that adequate supply of ration and other provisions to Muslim households remained uninterrupted, in addition to ensuring their safety and security of their properties. The mahant was one of the proponents of the Ram temple in Ayodhya and campaigned for long to build a temple at the site of the Babri Masjid, but he is reported to have said to his disciples: “I want the Ram temple to be built at the site where Babar had unlawfully erected the Babri Masjid, but my temple will not be built over the blood of a single Muslim.” The mahant’s six-decade-long friendship with Hashim Ansari, the main litigant and his opponent in the Babri Masjid case, is legendary, in that they went to the court in the same rickshaw and shared a cup of tea during breaks even though they were fighting a bitter case over Ayodhya. Despite his fierce Ram Janmabhoomi campaign, the mahanta is known not to hold a personal grudge against the Muslims of Ayodhya.

The Hanumangarhi mahant’s response to the incident presents a stark contrast to Bombay, Surat and Gujarat, where worst forms of communal riot have taken after Babri masjid demolition. The video recordings of the incident of mass rapes in Surat and burning alive of people, including ex-member of parliament Ehsan Jafri at the posh Gulbarg society of Ahmadabad during the infamous Gujrat riots show the extent of the violence. Such heinous instances of violence are incidentally missing from region of Awadh during some of the worst communal incidents. This contrast can be understood through an examination of the very nature of the composite culture of Awadh, which is a result of the liberal and inclusive policies of the Sharqi sultans, Mughal emperors and the nawab-wazirs.

A look into an incident preceding the 1857 Sepoy Mutiny presents the complex dynamics of conflict and co-existence between Hindus and Muslims in India, especially in the Awadh region. It was during the Sepoy Mutiny that the elements of cooperation between the Hindus and the Muslims were at its peak. The unity they have created against the colonial regime was quite proverbial. The British authorities were more concerned to create differences between the two principal communities as a part of their strategy to suppress the uprising.

Months before the annexation of the kingdom of Awadh in February 1856, the Hanumangarhi episode at Ayodhya created much bitterness not only among the two principle communities of the state, but it also led to the widening of the sectarian gulf between the Shi’a and Sunnis. The dispute related to the alleged desecration and demolition of an old qanati masjid at Ayodhya which was enclosed within the premises of Hanumangarhi. The present structure of Hanumangarhi stands at a site which was donated by Nawab Abul Mansur Safdarjung, the second nawab of Awadh kingdom (d1754) to a bairagi (hermit). The successors of the bairagi enclosed a much larger area, including an abandoned Qanati masjid, over which Muslims of the area lay claim. The bairagis ultimately demolished the masjid during the nawabi era itself.

It became an emotional issue for the locals as well as the Muslims in the adjoining areas. After the refusal of the administration to help build the mosque, a call for jihad was given to rebuild the demolished mosque and to protect the other mosques from the control of the bairagis. The matter was not only between the administration and the parties but the officers of the East India Company also became involved in the dispute. They were neutral initially, but later on they were also accused of being in league with the bairagis along with some officers of the nawabi administration.

Sunni Muslims of the region, including in Rohilkhand, were mobilised along communal lines, and a call for jihad was given by Syed Ghulam Husain. Ghulam Husain was assassinated along with his numerous supporters by the bairagis. This led to much more mobilisation under Maulavi Amir Ali, a pirzada of Amethi, who came from the family of Bandagi Shah Nizamuddin, the famous contemporary scholar of the times of Mughal emperor Akbar. He was joined by the local people as well as those from as far as Rohilkhand, who came to join the movement in large numbers. The Awadh court tried to buy time, by appointing a number of enquiry committees. Meanwhile the differences of opinion occurred among the Shi’a and Sunni theologians and also amongst the Sunni theologians on the question of the validity of jihad leading to further bickering and indecisiveness. Ultimately, Maulavi Amir Ali, on his own, along with his staunch supporters, decided to proceed to Ayodhya on November 7, 1855. He was intercepted by the forces of the East India Company and some Rajput taluqadars, and after a fierce fight, he and his 500-700 followers were killed near Bhelsar crossing, at Rudauli (the present Bara Banki district of Uttar Pradesh). 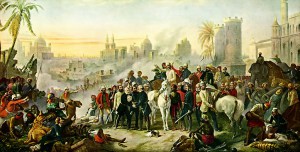 The Relief of Lucknow by Thomas Jones Barker. Credit: Wikipedia

After the forces of the East India Company left, the next day “the Muslim zamindars of the area gave proper burial to the corpse of the slain companions [of Maulvi Sayed Amir Ali].” The event evoked anger and condemnation of the Awadh regime by the contemporary writers and poets who mobbed the nawab for his indecisiveness and inability to take on the bairagis. Nawab Wajid Ali Shah,who was known for his catholicity and lovability, was condemned to the extent of being compared with the hated Ummayad ruler Yazid b. Muawiya (AD 683) the most hated figure in shi’a psychic. Thus, by implication Maulavi Syed Amir Ali was elevated in status with the martyrs of Karbala!

The assassination of Maulavi Amir Ali shook the imagination of the people, especially the Sunni Muslims, and Ali Naqi Khan, the then Prime Minister of Nawab Wajid Ali Shah was prime suspect. The poets and writers composed a number of chronograms lamenting the death of Maulvi Amir Ali and cursing the government of the nawab. Perhaps he was sure of the outcome of the cause he was going for due to the dubious attitude of the nawabi administration and open hostility of the Company officials. Therefore, he is himself said to have composed a chronogram for his own martyrdom:

(In remembering the Truth I pay utmost attention;
intoxicated by the love for ‘Ali I get enthusiastic
Before martyrdom I write this chronogram;
on the battlefield I carry the shroud on my shoulder)

Communitarian and sectarian relations in the kingdom of Awadh were at its lowest ebb during this time. This was exactly the time when Maulavi Ahmadullah Shah, the famous rebel leader, had also arrived in the city of Lucknow. His arrival in the city was reported in Tilism, the weekly newspaper of Lucknow, on November 21, 1856 in the following manner:

These days a person called Ahmadullah Shah, in disguise of a faqir but having all paraphernalia of royalty, has arrived in the town and stayed in the sarai of Mutammad-ud Daulat…[he] has shifted to Ghasiyarimandi… People of the town visit him in a large number on Mondays and Thursdays to take part in the mystic gatherings (majalis-i hal-o qal). A number of feats are performed in midst of these gatherings…such display takes place every morning and evening for the viewing of the masses… (Tilism, No. 18, November 21, 1856)

The impact of these gatherings on the population of Lucknow can be gauged by the next report of Tilism, which appeared two months later, which reported on January 30, 1857:

Ahmadullah Shah in Ghasiyarimandi is very fearless in saying whatever he wishes to say and a large crowd is always there, often Maulave Amiruddin Ali is remembered. Although he is unable to do anything, orally he always pleads for jehad.

Ahmadullah Shah left Lucknow apparently for Bahraich but he stopped at Faizabad, where he stayed at Chawk Sarai and once again started preaching jihad. His companions kept visiting the graves of the companions of Maulavi Amir Ali, who was considered to have died fighting for jihad. Seeing the changing mood of the people, English authorities arrested him and put him in the district jail.

Ahmadullah Shah had a lucky escape from the jail when, during the Sepoy Mutiny of 1857, prison gates were opened and all prisoners freed. Upon release, he was elected the leader of the people to fight against the British forces. On assuming leadership, he reportedly issued orders for the destruction of the temples of Hanumangarhi. But on realising that such an attempt would alienate Hindus, he retracted his orders and left for Lucknow. At the time of final reckoning, forgetting all these apprehensions, the sepoys joined Ahmadullah Shah’s forces at the Battle of Chinhat, on June 30, 1857. He was now the leader of the people of Awadh, as well as the sepoys, Hindus and Muslims both.

Together, the mutineers overpowered the British forces, who retreated to Lucknow.

This is indeed an important turn of events – somebody who visited Faizabad to avenge the death of Maulavi Amir Ali and to rebuild the Hanumangarhi mosque was invariably chosen as the joint commander of Hindu and Muslim sepoys. The temporary nature of the worsening of community relations was quite apparent, but people were ready to forget such differences at the hour of the crisis. Perhaps this entire episode brings out the deep-rooted and strong nature of the elements of composite culture of the region. During the course of the Sepoy Mutiny, British forces made definite attempts to highlight Hindu-Muslim differences; they even tried to play the sectarian Shi’a-Sunni divide but up to little use. No wonder then that a large number of taluqadars, a majority of whom were Rajputs, were still siding with Begum Hazrat Mahal, now fugitive in the Nepalese Terai with no authority of her own.

The events around the Hamunangarhi incident should remind the people of Awadh and elsewhere the shared past of conflict and cooperation between Hindus and Muslims and sects within Islam. It should also remind us of the temporary nature of communal and sectarian divides and of the fact that those divides can be avoided in favour of larger ideals of anti-colonial struggle, pluralistic values and also a peaceful co-existence.

Saiyid Zaheer Husain Jafri is Professor of History at the University of Delhi.

Excerpted from the author’s presidential address titled “Co-existence and Conflicts in Pre-1857 Awadh” at the 23rd session of UP History Congress, M.J. P. Rohilkhand University, Bareilly.