Past Continuous: How the 1987 Meerut Riots Announced the Future of Babri Tensions 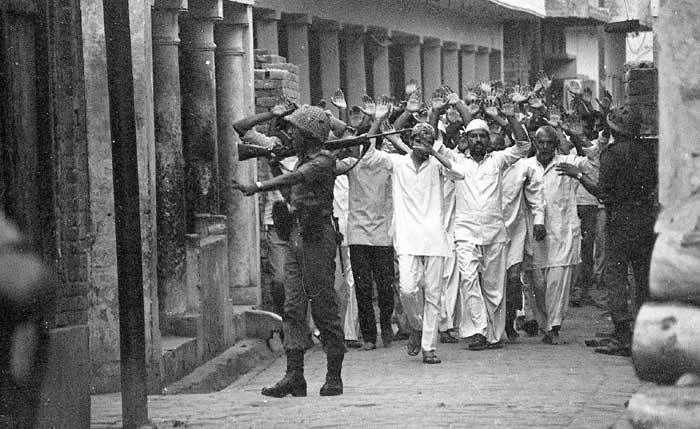 Recently, when the Supreme Court reopened cases of criminal conspiracy in the Babri Masjid demolition case against L.K. Advani and others, it was not missed on anyone that this is also the 25th anniversary year of the demolition. It was also said that as December 6 comes closer, the cacophony of discordant voices emanating from the decades-old conflict will amplify as rival groups plan programmes to mark the event in contrasting styles.

The Sangh parivar and its affiliated organisations are expected to celebrate the occasion, as they have over a quarter of a century (as Shaurya Diwas or Valour Day) or maybe even more, given that their party is in power at the Centre and in the state. But for Muslims, both politicians who made careers championing Babri politics and ordinary citizens, the day will be marked as a Black Day, a day of grief and remembrance.

The dispute over the 16th-century shrine has raged for at least 164 years, since 1853, when warring groups of Hindu priests and Muslim maulvis first clashed on the issue. After, several episodes changed the politics of the site during the colonial period. But none of these were as significant as the first major occurrence there after independence – the surreptitious installation of Ram Lalla idols inside the mosque in December 1949.

With the gates to the shrine locked for the public thereafter, the dispute remained localised and had no resonance outside the temple town till February 1986, when a local court dramatically unlocked the gates for Hindu devotees, thereby opening the sluice gate of communal feelings. The unresolved conflict is not of the run-of-the-mill variety, but is the most significant reason behind the BJP’s rise to power.

The agitation for building a Ram temple after destroying the Babri Masjid was never one-dimensional and did not begin the way agitations do now. Its denouement is still awaited. Every event in the modern era, including the 1853 clash, was preceded by a series of events with different significance. Each of these chapters in the history of Ayodhya have to be remembered as separate episodes and important watersheds in a long chain of events that changed India irrevocably.

For instance, if the magisterial order reopening the lock must be flagged for judicial complicity with Hindu majoritarianism, it must be also be marked as the occasion when Rajiv Gandhi capitulated to communalism of both varieties. Similarly, the series of communal clashes in the early summer of 1987 in Meerut marked the time when the janmabhoomi genie escaped the bottle.

Thirty years later, as I look back at the riots that several of us covered as young reporters with the benefit of hindsight, the perspective is different. Hashimpura and Maliana have meaning that transcend earlier conclusions. In 2017, the way of looking at the riots that spread over three months beginning mid-April 1987 is different even from what it was in March 2015, when a Tis Hazari court acquitted all those accused of perpetrating the most reprehensible episode of extra-judicial custodial killings.

Communal conflicts in Meerut in April-June 1987, with the state playing a significant role in targeting Muslims, were the first major riots triggered by incompatible positions on the Ayodhya dispute. What used to be a simmering dispute came to a boil – and thereafter never cooled down.

Though ferment set in on several parts of the country, especially northern India, after the Babri Masjid was unlocked, the riots in Meerut marked the emergence of the Ayodhya dispute as the central issue in communal conflicts. If one can use those words for a political agitation which eventually altered Indian political topography altogether, the 1987 riots in Meerut marked the ‘coming of age’ of the Ayodhya discord.

Till the summer of 1987, the dispute remained essentially a temple-mosque clash. But thereafter it acquired a national and political dimension, and provided early indications of the emergence of an aggressive Hindu nationalist movement. However, because of the inadequacy of secular forces, it was not viewed for what it was and unfortunately responses to these riots were no different from typical reactions to communal riots.

Meerut had a history of communal riots with the occurrence of death from the pre-independent period and bloody episodes were witnessed after independence too in 1961, 1968, 1973 and 1982. Most were triggered by the usual, often petty, causes, but deep-rooted prejudices between Hindus and Muslims was at the heart of the repeated episodes of violence.

The 1987 riots, however, were sparked by responses to the events in Ayodhya. Syed Shahabuddin called for a rally in Delhi on March 30 and, after attending it, thousands of Muslims returned home, including to Meerut, to felicitations within their community and derision from Hindus. For every black flag put up by Muslims, the Vishwa Hindu Parishad had saffron ones ready. Street rallies and provocative slogans were the order of the day and the state intelligence bureau warned that the exchange of provocations had the potential to “precipitate communal trouble in sensitive districts”.

While Hindus were angry with Muslims over protests at the unlocking of the shrine, Muslims were outraged at the magisterial directive and also the jubilation of belligerent Hindus. Backed by new leadership which showed little restraint and was over anxious to emerge as representatives of the community, bellicosity was not the limited to Hindus. The state Intelligence Bureau report forewarned:

“Militancy among the Muslims was growing on this question (Ayodhya issue). The Hindus were by no means less aggressive, perhaps a degree more. If Muslims raised the slogan: ‘We Muslims are 30 crores, we will wring blood out of you,’ the Hindus shouted ‘Hindus and Sikhs are brothers, where did the Muslim community come from,’ and ‘If you want to live in India, you have to live like a Hindu.’ These slogans are painted on the walls of Meerut.”

In fact, the year began on a contentious note because of Shahabuddin’s call to Muslims to boycott Republic Day celebrations and prepare for a “long march” to Ayodhya. Though many shared his anguish over the reopening of the Babri Masjid, he found little support among secular anti-Congress parties. Consequently, the BJP too upped its ante.

Advani, elected president of the party barely months before, labelled Shahabuddin an “anti-national” – possibly the first time such an accusation was levelled against a political adversary – and declared that the idea of a march to Ayodhya was an “unabashed attempt to intimidate the nation by threats of violence”. The VHP slammed Muslims for putting “religion over the nation”.

In the midst of the controversy stemming from Shahabuddin’s programme, Advani issued a seminal statement that provided a peep into the future arguments of the Sangh parivar. However, its adversaries at that point did not comprehend that the agitation for a Ram temple at Ayodhya was merely a smokescreen; the agenda was more sinister! Advani said, the dispute was “not just a legal issue, nor is it merely a question of history. It is essentially a question of a nation’s identity. Whom must this nation identify with; Ram or with Babur?”

He further claimed that protests by Muslims over reopening of locks indicated that while Hindus identified with Lord Ram and wished to ‘liberate’ his birthplace, the Muslims instead of respecting this sentiment, considered Emperor Babur as their icon. The BJP, he said, “rejects this perverse and separatist approach and holds that all patriots, Hindus and Muslims, can­not but identify themselves with Ram and recognise Babur for what he was, a foreign invader.” The same argument has since been repeated ad nauseam, but in 1987, no one had the capacity to comprehend the real intention behind the Ram temple agitation.

The 1987 riots in Meerut were more serious when compared with previous communal clashes in the city or in other parts of the country. What made these riots worse was that by this time, Meerut had a well-developed institutionalised system of riot production or IRS, as noted American political scientist Paul Brass described it.

But unlike the past, when a small dispute over either a clash between two individuals from the two communities or a minor issue over municipal land and conflicting claims over its traditional use enlarged into a violent social conflagration, this time the genesis lay in a conflict that was soon to assume epic proportions.

It is indeed tragic that nobody with the capacity to ensure India did not get sucked into a communal maelstrom realised the true nature of the Meerut violence.