A long line of African-American leaders looked towards India and Gandhi when they were engaged in their own struggle. 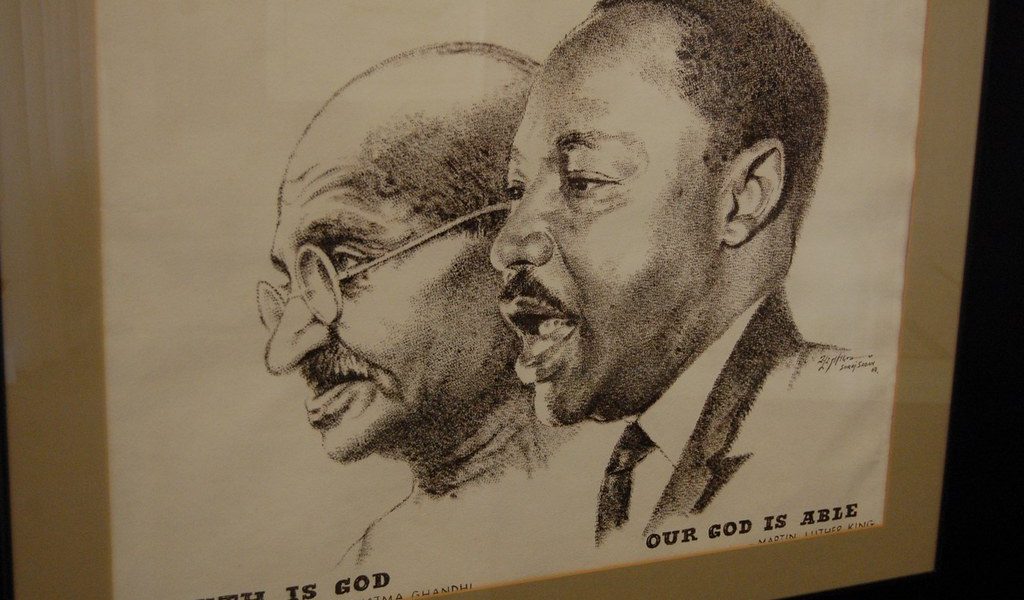 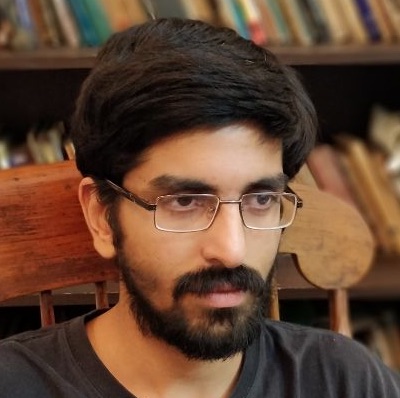 This year, we mark the 150th anniversary of the birth of Mahatma Gandhi. A person’s ideas and actions can only be judged by seeing their role in the course of world history. Even as we see the myriad aspects of Gandhi’s life and associated ideas 150 years after his birth, we should not forget his prime importance to history and to his time: as the leader of the Indian anti-colonial struggle, the culmination of which led to the first break from the chain of Western colonialism.

It is for this struggle in all its aspects and complexity, that India cemented its place in the 20th century inspiring leaders ranging from Kwame Nkrumah who coined the term “positive action” based on his study of Gandhian satyagraha to Ho Chi Minh who called himself a “disciple” of Gandhi.

And yet no struggle seems to have been as deeply informed by the Indian freedom struggle as the African-American struggle for freedom, often called the civil rights movement. Those who criticise Gandhi as a “racist” based on remarks he made in South Africa tend to completely ignore the African- American encounter with Gandhi and certainly do not appreciate its depth.

It is to be remembered it was African-American intellectuals, most prominently W.E.B. Du Bois, who conducted a scientific study of the concept of race and provided a theoretical understanding of the nature of racism in America and the world. Du Bois greatly admired Gandhi, saying:

“He was the Prince of Peace and stood among living leaders alone, because of that fact…It is singular that a man who was not a follower of the Christian religion should be in his day the best exemplification of the principles which that religion was supposed to lay down.”

Du Bois believed that it was particularly important that Gandhi had learnt and fashioned his methods in Africa, for Africa was at the centre of European colonialism in the late 19th and early 20th century.

He was only one in a long line of African-American leaders who, remarkably, looked towards India as they were engaged in their own struggle. Two institutions played a defining role in this connection between India and Afro-America: the Historically Black Colleges and Universities (HBCUs), as well as the Black Church.

Benjamin Mays, the president of Morehouse College, an HBC, visited India and met Gandhi. His conversation convinced him that Gandhi’s campaign had given the Indian masses a new conception of courage from which there was much to learn. The first African-American president of Howard University, Mordecai Johnson visited India, studied the ideas of its freedom struggle. On attending his lecture in Philadelphia, Dr Martin Luther King Jr. was so moved that he committed himself to studying the methods and philosophy of Gandhi.

“We want you not for White America, but for the Negroes; we have many a problem that cries for solution and we need you badly.”

Even though Gandhi never visited America, his ideas travelled and were applied in the struggle led by Martin Luther King Jr. More importantly, the African-American people, in their application of Gandhian ideas, provided perhaps the greatest interpretation of Gandhi’s method.

In describing his intellectual journey, Dr King has stated that it was Gandhi’s philosophy which he found to be more intellectually and morally satisfying than the whole pantheon of European philosophers. His criterion for the judgement was the applicability of this philosophy to his own struggle for freedom. He then went on to philosophically build upon those ideas, saying it was necessary to fight against the three evils of militarism, excessive materialism and racism in American society, calling for a revolution of values and the creation of a “beloved community”. In fact, Martin Luther King Jr and Gandhi are so closely tied together in their philosophy, work and historical roles that it is almost as if the two must be understood together.

“We were looked upon as brothers with the color of our skins as something of an asset. But the strongest bond of fraternity was the common cause of minority and colonial peoples in America, Africa and Asia struggling to throw off racialism and imperialism.”

This sentiment was most famously captured in the Bandung conference in 1955, in which India led the non-aligned movement and colonies emerging into freedom. King believed that Gandhi had exerted significant influence on the conscience of the international community and that it was necessary to follow his principles of non-violence in international relations. The choice, for him, was between non-violence and non-existence. 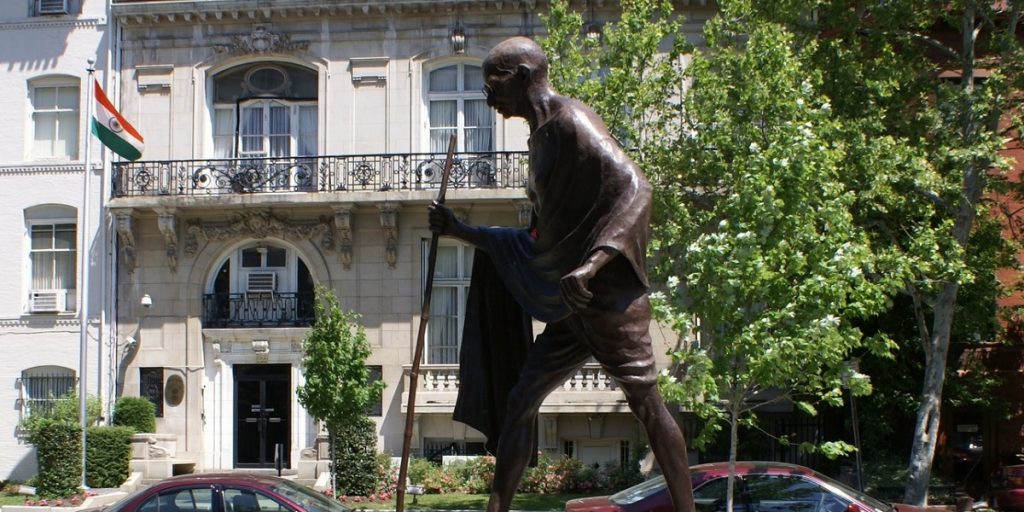 Statue of Gandhi at the US Embassy in Washington, US. Photo: Wikimedia Commons/Aaron Siirila CC BY-SA 2.5,

Today, when “international recognition” for India, most recently seen in the event “Howdy, Modi!”, has abandoned any commitment to principles and seems to be primarily associated with White America, it is important that this history be remembered. In fact, the historic city of Philadelphia celebrated the 150th anniversary of Gandhi with an event titled “Mahatma Gandhi and our Single Garment of Destiny” by inviting civil rights leader and close associate of King, Rev. James Lawson to speak at the City Hall.

Synthesising elements found around the world

Rev. Lawson is another link in the long chain that deeply connects the Indian and the Black freedom struggles. Rev. Lawson became a practitioner of non-violence early in his life influenced by his mother. He would later read Gandhi and study non-violence during his college years. He stayed in India for a brief period between 1953-1956, during which time he furthered his study of Gandhi and met Jawaharlal Nehru. After returning to America, he eventually joined the struggle for racial and economic justice, most famously in campaigns to desegregate Nashville, Tennessee. He was one of the leading architects of the civil rights movement in the US. 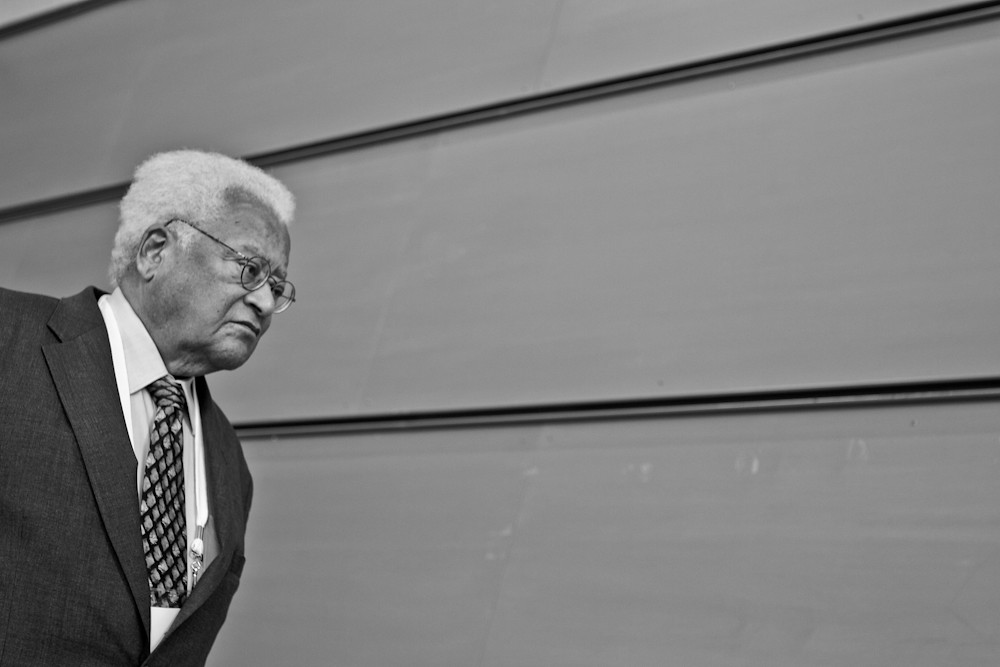 It is worthwhile to ask, why and how Gandhian philosophy and tactics were so successfully applied by African-Americans. They point to deeper connections and roots of non-violence. This fact was explained by Rev. Lawson who said that Gandhi brought together and synthesised elements whose spirit existed around the world. In the case of Afro-America, the philosophy of non-violence could be found, for example, in the African-American spirituals. Thus Rev. Lawson calls Gandhi “the father of non-violence”, a person who synthesised various elements that already existed. Gandhi himself said:

“I have nothing new to teach the world. Truth and non-violence are as old as the hills. All I have done is to try experiments in both on as vast a scale as I could.”

Also Read: How Gandhi turned a 21st Century Classroom Into an Empathy-Filled Community

On the day Philadelphia marked the 150th birth anniversary of Gandhi, a city council resolution passed on the same day urged people to “honor the legacy of Gandhi and unite in mutual love to achieve peace and justice.” It is a reminder that these freedom struggles of the past remain unfinished and it is in continuing our efforts to struggle for peace and justice that we pay Mahatma Gandhi the most honest tribute that he deserves today.

Archishman Raju is a research fellow in physics and biology at Rockefeller University.