When a Long, Dark Night Lit up with Music: The Story of the Leningrad Symphony I

Even as hunger and death stalked the city of Leningrad, her citizens found in themselves the strength to defy unspeakable terror one night in August 1942. 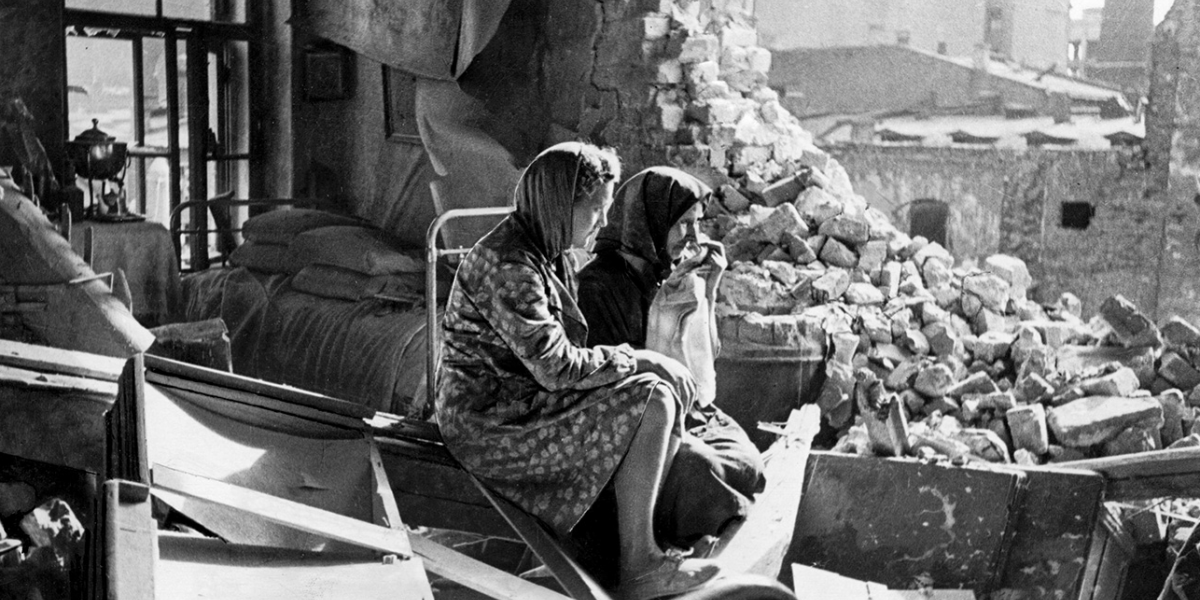 The German siege of Leningrad lasted 900 days from September, 1941 to January, 1944. Credit: Twitter

The second part of this series will be published on August 10.

For us Indians, August 9, 1942, will forever remain a date to look back to with awe and pride. On that day, with the launch of the Quit India movement, India’s colonial masters were served their final notice: get out or get shoved out.

August 9 was supposed to have been a very important date in the Third Reich’s calendar as well, perhaps the most important date. In the end, it may well have been that, but in not quite the manner Adolf Hitler would have liked. Indeed, in some sense, the day proved to be the tipping point for the Nazi campaign for world domination. Hereafter, it would only be a journey downhill, to disaster (though it did not necessarily look like that at the time).

This may sound somewhat far-fetched – after all, the Stalingrad offensive did not even start before August 22 that year, while the epic tank battle in the Kursk salient was nearly a year away yet – and so the story of that day bears retelling.

Shadows lengthen across the Soviet Union

When Operation Barbarossa burst upon the Soviet Union like a screaming tornado in June 1941, the city of St Petersburg featured very prominently on Hitler’s list of most prized targets. One reason, of course, was that it was Russia’s second largest city, arguably still her most important city in many ways, though it had ceded to Moscow as the country’s capital in 1918.

But what mattered even more to Hitler was its name – Leningrad (as it was known then, after the man who had led the October Revolution) – as well as the fact that Leningrad, and not Moscow, had been the cradle of the Revolution. In Hitler’s eye, Bolshevism/Leninism (together with Jews everywhere) were the worst scourge of the great ‘Aryan’ civilisation, and his visceral hatred of Vladimir Lenin (who had been dead for 17 years in 1941) prompted him to make a dash for Leningrad even before he grasped at Moscow.

And his blitzkrieg of June, 1941 nearly threw the Soviet behemoth over the precipice. It did look as though the Wehrmacht was about to overrun the Soviet Union quite like it had done with France, Belgium and the Netherlands the previous summer. A nearly four million-strong Axis force swarmed over a 2,900-km front in a breathtakingly swift, multi-pronged manoeuvre that had no precedent in military history. The initial Soviet losses were crippling: over 3,000 aircraft were wiped out in the first three days alone; Lvov, Kiev, Smolensk, Riga and Minsk – all strategically important industrial centres – surrendered in no time as whole armies got wiped out; General Eric von Manstein’s Panzer Corps raced to the river Dvina to the north, more than halfway to Leningrad, in a mere five days.

Hitler’s boast to his army that if one were to “smash in the door… the whole rotten structure (of Russia) will come crashing down” seemed decidedly prophetic. The first few days, Stalin appeared petrified in indecision. He had been hoping against hope that the Molotov-Ribbentrop non-aggression treaty of August 1939 would continue to enjoy its charmed life for some more months, while he himself figured out how to get the Red Army – emaciated, indeed devastated, by the monstrous purges of 1936-38 that Stalin himself had engineered – combat-ready again. By the time he pulled himself together and plunged into action, the Germans were virtually at Leningrad’s door. A desperate Stalin was obliged to get rid overnight of the inept Kliment Voroshilov, commander of the Leningrad Front, and task Georgi Zhukhov, the Red Army’s most brilliant tactician and an outstanding leader of men, with the defence of the city. Hundreds of thousands of Leningrad civilians, including many scarred by mindless state terror previously, also rallied to the city’s defence, surprising even the country’s leadership. Leningrad was saved – but only just, till the next blow came.

In the process though, one deadline that Hitler had set himself was missed. The Fuehrer had settled on August 9 for hosting a grand celebratory dinner in Leningrad’s famed Astoria Hotel in honour of the Nazis’ victory at Leningrad. He had given himself all of six months to bring the USSR to her knees. Invites are known to have been printed but had to be stowed away.

The dark night descends on Leningrad

Thwarted, Hitler’s way of having his back upon his worst enemy turned out to be one of the worst war crimes in history. If he could not take Leningrad, he would strangulate her to death, and “wipe her out from the face of the earth”. Incredibly, his army also went along with his argument that winning Leningrad outright was the worse option, because that would saddle the Nazi establishment with the liability to feed a city of nearly three million inhabitants.

On September 8, 1941, began the longest, cruellest siege in recorded history (longer, and incomparably more brutal, than even the Madrid blockade of 1936-39) of any urban settlement. Leningrad’s road, rail and waterway links with the world outside were severed with clinical efficiency even as an army over 700,000-strong stood by to make sure that the siege held. Relentless Luftwaffe bombings continued to strafe the city, knocking out its utilities, food stores and hospitals one after another.

Leningrad was to starve and bleed to death in the long, freezing winter which was just round the corner. Hitler’s orders were for any offer of surrender to be rebuffed. Civilians seeking to escape were to be pushed back into the siege ring with fire. 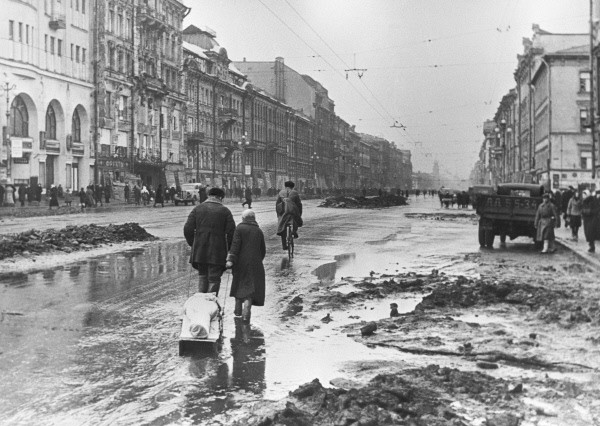 Before the siege was finally broken by the Red Army on January 27, 1944, a staggering 750,000 Leningraders had died – an overwhelming majority of them from starvation, exposure and disease. Death was in the air. Death was everywhere. People dropped dead suddenly, without a warning, as often on the slushy roads as in their battered apartments or workplaces. At the siege’s worst point, in the very depths of a brutally cold winter – temperatures often fell to -30 degrees Celsius, and there was no heating, fuel stocks having run dry by then – the average daily adult ration added up to all of 125gm in bread, and virtually nothing else. And there was no electricity, no running water, no city transport and little by way of medical help. Well over 100,000 died of starvation in December-January 1941-42 alone. The dead lay on the open snow for days on end, for the living had hardly the strength or the wherewithal to bury them. Numerous eyewitness accounts, people’s private diaries and letters to friends capture the unimaginable horror of the time. Twelve-year-old Tanya Savicheva, who fitfully wrote her diary through the 872-day-long siege, scribbled a chilling roll-call of death:

Tanya did somehow survive the siege, though she died soon thereafter of ‘progressive dystrophy’, a polite euphemism for utter, irreversible emaciation.

But the city of Leningrad survived the apocalypse. And that it did so is a tribute to the incredible courage, resilience and capacity for self-sacrifice of her common citizen. There exists a mind-bogglingly large number of stories, most true, about the utter destruction of the human spirit during that time of hunger, hopelessness and terror. People filched others’ ration cards, knowing full well that this meant a death sentence for those robbed; a mother would loudly wish for her son to be dead – because she suspected him of stealing from the family’s measly food stock; dead bodies lying around in open spaces would be stripped bare of all their clothes, so that those still living could get a little extra warmth.

Equally, however, there are many deeply moving accounts of men and women unhesitatingly giving up their rations for the sake of a friend, sometimes even a stranger, who was in direr need; of humble Leningraders refusing to leave their posts even when death stared them in their face.

A young mother, Yelena Kochina, writes of how an elderly woman, far gone herself in starvation and exhaustion, yielded her own place on a cruelly long food queue to Yelena when she realised that Yelena had a child to feed at home. Alexander Werth, BBC’s Moscow correspondent, met Tamara Turanova, “a little girl of fifteen, very pale, thin and delicate, obviously run down”, who had lost both her parents to starvation and now worked at the famous Kirov (formerly Putilov) factory, very close to the front. “’Doesn’t it frighten you to work there? ….Wouldn’t you like to change over to another factory?’, Werth asked her. ‘No’, she said, shaking her head. ‘I am a Kirov girl, and my father was a Putilov man, and really the worst is over now, so we may as well stick it to the end’. And one could feel that she meant it, though it was only too clear what terrible nervous strain that frail little body of hers had suffered.”

Twenty-eight-year-old Anna Zelenova, director at the Pavlovsk Palace museum, refused to evacuate even after the Germans had overrun Pavlovsk, a Leningrad neighbourhood, and every Russian had fled from there. She made sure that all the museum’s remaining possessions (she had commandeered vehicles over several days previously to despatch the main art objects to safer locations) had been securely packed and boarded up before she started out alone on a long and weary walk towards the city . “It took her all night to reach there, stumbling in heeled shoes through fields and allotments, and crouching in ditches at the thump of artillery fire”. At 10 next morning, “she finally reached St. Isaac’s Cathedral, in whose ‘dim, grim, cold and damp’ vastness she was to live, together with the staff and the rescued contents of all the other abandoned summer palaces, for the whole of the siege”. “Why did Leningrad ‘take it’?”, Alexander Werth, who wrote one of the first few authoritative histories of Germany’s war with the Soviet Union, recalls many people from outside the USSR asking him at the time. He did not find it easy to answer that question, nor did anybody else.

“What is remarkable, once the city was surrounded”, Werth notes, however, “was not the fact that the people ‘took it’, but the way they took it”.  Werth is right: the question about history’s worst blockade should not revolve around why the besieged citizenry suffered what they did – for they had precious few options about it – but how they measured up to the terrible demands that it made upon their capacity for endurance and hope – indeed upon their essential humanity. And if we were to think of one episode, one day from that terrible ordeal that encapsulates the spirit of Leningrad’s resistance, we could  do no better than remind ourselves of August 9, 1942, the day – or rather, the night – on which a piece of great music lit up the dark, long night of the siege.

But that is a story for another day.

Anjan Basu freelances as literary critic, commentator and translator of poetry. He can be reached at basuanjan52@gmail.com.