As Army Plans To Revise Several ‘Colonial’ Traditions, a Look Back at Its Colourful History

The proposed de-colonisation of the Indian Army will review elaborate uniforms and trimmings, regimental names, hoary traditional ceremonies and rituals and procedures. 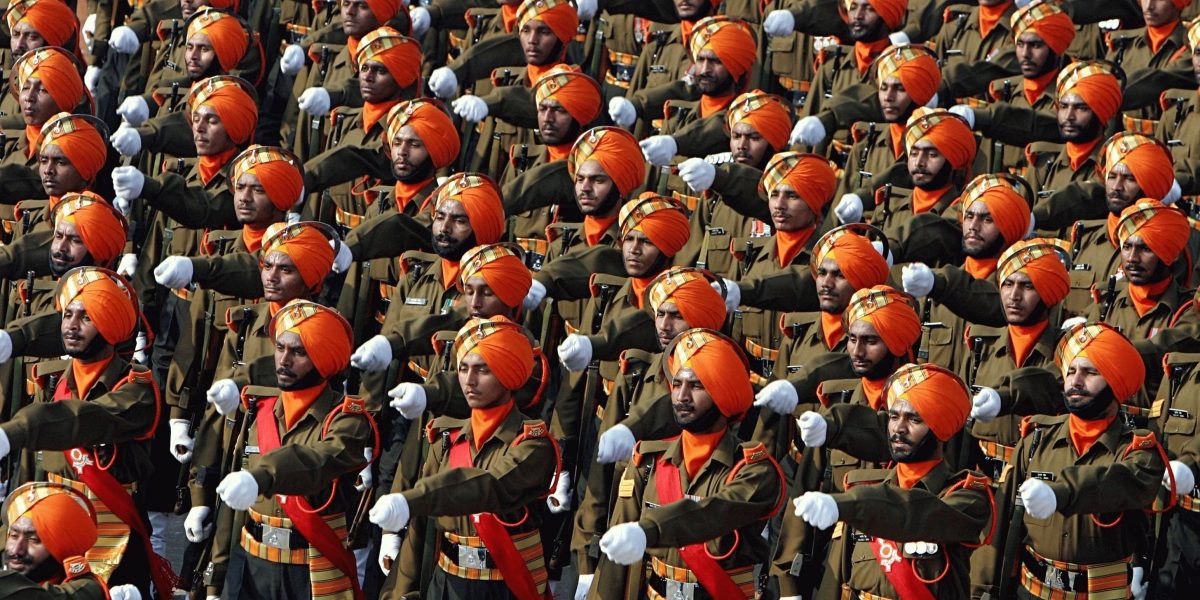 Under review presently by the Adjutant General’s branch, the IA according to recent media reports, aims to soon end ‘archaic and antiquated’ English practices in the force, whose turbulent and colourful founding dates back to the East Indian Company in the 18th and 19th centuries.

Perpetuated subsequently in independent India for 75 years, these colonial associations include caste and ethnically-specific regimental names – like Sikh, Gurkha, Mahar, Jat and Rajput, amongst others – some of their insignias, featuring British and Christian associations and symbols; and institutes and roads in Indian cantonments named after English soldiers who served the colonial administration.

Also on the anvil is the possible termination of the Beating Retreat ceremony, first employed in 17th century England to recall nearby patrolling units back to their castles, and one that has grandly marked the end of India’s Republic Day festivities every January 29, since 1955.

The entire ceremony, admired wondrously around the world, is performed with dazzling wizardry by splendidly accoutred buglers and trumpeters and pipe, fife and brass bands from the three armed services, who were joined recently in this extravaganza by the Central Armed Police Forces and Delhi police bands. Ironically, the Retreat symbolically marks the end of British rule and the coloniser’s departure. 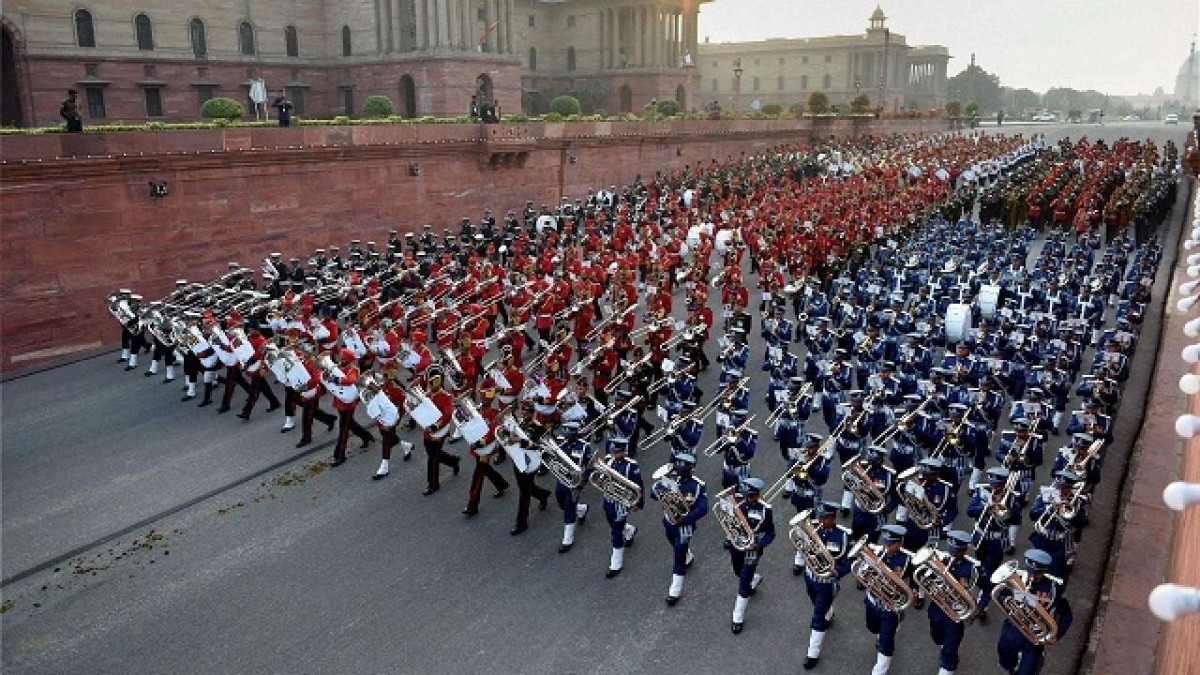 Moreover, the affiliation of army units with foreign armies, especially those that fought alongside it in the two World Wars, too would be critically examined by the Adjutant General, as would curtailing the frequency of individual regimental events and reunions.

The three-star officer, whose duties include human resource planning and discipline, is also expected to review the army’s relationship with the Commonwealth War Graves Association, which regularly honours 1.7 million men and women of the Commonwealth who died in WW1 and WW2.

He will also appraise the grant of honorary commissions to junior commissioned officers in the rank of captain and lieutenant, and the continuing display of pre-independence battle honours awarded by the British to certain regiments and units to celebrate their successful campaigns against Sikhs, Marathas and the Gurkhas.

Rescinding the long-established British tradition of appointing one-star officers and above as ‘honorary colonels’, or ‘eminence grise’ to their former battalions or regiments, in recognition of their services, too was under consideration, official sources said. One senior officer said that this latter appointment was akin to that of an ‘agony aunt’ for the unit and doing away with it would only deprive the unit of not only a well-wisher but, at times, a problem resolver.

This review follows the recent revamp of the Indian Navy’s ensign, or flag, to disassociate itself from the colonial Royal Navy association by removing the vertical red Cross of St George. However, the Army’s proposal has been strongly opposed by veterans. They fear that all such projected alterations would precipitate an ‘all-round dilution’ in the army’s ethos, as tradition played a vital and dynamic role in military life. For other than providing continuity between generations of soldiers, it also bolstered morale and pride.

Indian Navy’s new ensign is seen in the background, at the launch of the carrier INS Vikrant. Photo: PTI

“The IA’s regimental histories and traditions are built on the valour and sacrifice of generations of Indian soldiers, irrespective of under whom they served and where they did so,” said defence analyst Major General A.P. Singh (retired). Doing away with all or even some these and replacing them with something new and untried would be a troubling transition that hits out at the core of the army’s self-esteem, espirit de corps and overall josh (fervour), the former armoured corps officer added.

Other veterans said the army lived by the credo of ‘Naam, Namak and Nishan’ (honour, loyalty and identity) that was further accentuated by their respective units’ battle cries, all of which were rooted firmly in custom and tradition dating back hundreds of years.

“To tamper with these is simply to deny history,” said a retired three-star officer declining to be named for fear of official chastisement. And, we should not forget, he warned, that today’s IA is the sum of its multiple parts and whether we like it or not, the British were a dominant part of it. “Tampering with history is avoidable, as the prevailing system has worked well through many wars and local insurgencies since 1947,” he suggested, adding that the IA should consult with veterans before initiating changes.

“The so-called colonial legacy did in no way impinge upon military efficiency,” said Lieutenant General Samer Pal Singh Dhillon, retired IA Deputy Chief of Staff. Battle honours actually honoured the braves who fought shoulder to shoulder for a just cause and were nationalist agnostic, he added. General Dhillon anticipated “still resistance” from regimental units and veterans over these possible changes.

The Indian Army’s history is amongst the most fascinating, compared to that of other countries, due entirely to its variegated roots and subsequent evolution, all of which have been rivetingly recounted by numerous local and foreign historians and scholars. Many of its older regiments came into existence in the early 1800s, after the rapidly expanding East India Company, which was desperately short of troops to help it annexe territory and consolidate its control, resorted to the old Mughal mansabdari system of raising ‘irregular units’.

This involved committing large jagirs or land endowments to potential military commanders, mostly native enterprising adventurers, or junior British officers, who used the income from these lands to sustain cavalry and infantry regiments that eventually became part of independent India’s army. These included cavalry regiments like Hodson’s, Skinners and Gardners named after their British founders, while many others raised by equally audacious young English officers, were transferred to Pakistan after its creation in 1947. Much like their Indian equivalents, these too remain in service, albeit with their names changed.

Meanwhile, insiders told The Wire that many IA regimental names were almost certain to be changed. They said that this had become apparent earlier after the Department of Military Affairs (DMA) mooted the Agnipath scheme in June, with the intent of discarding the age-old specific class composition of several regiments by creating a new All-India, All-Class (AIAC) system.

The DMA had forcefully argued that these ensuing regiments, comprising personnel below officer rank (PBOR) Agniveers, recruited collectively from across the country, would initiate the long-pending change from the caste and ethnic parameter norms inherited from the British, despite its enduring efficacy.

Blithely ignoring India’s distinctive cultural, regional and historical perspectives, the DMA had cited recruitment policies of the Israeli and Chinese militaries, amongst others, where such intermingling, similar to that planned under Agnipath, had proven efficacious. Conveniently, its officers omitted to mention the racial and national homogeneity in these two countries, compared with India, in their anxiety to emphasise their points of view and to further Agnipath.

Alongside, the IA’s eight-odd regulation officers uniforms too were likely to undergo a ‘revision’, with the more fancy and colourful ones with British overtones, being done away with. These included the dashing Blue Patrols, the ceremonial winter uniform that comprises a black ‘bandgala’ coat with gleaming silver-coloured buttons, and with each wearers rank elaborately embroidered on the shoulder, and similarly coloured trousers.

Officers from the armoured corps – successor to the British cavalry – however, wore breeches and sported dazzling chain mail on their shoulders along with their rank. Likewise, the future of the army’s uniform 6A/B too was tenuous for its seemingly colonial ties. Whilst the 6A uniform variant for formal mess wear, was a white coat with Blue Patrol black trousers and a cummerbund sporting the respective regimental colours of the concerned officer, its 6B equivalent, worn in summer, did away with the coat.

Furthermore, for several veterans there was also a question mark over the masses of the army’s regimental silver, a large proportion of it antique and a legacy of colonial times. Almost all the older regiments had masses of catalogued sterling silver trophies and other paraphernalia like silver beer mugs, thalis, fruit and nut bowls, side plates and other equally precious regalia, that invariably travelled with the unit whenever it moved, even at times, to field areas.

“In most instances, this regimental silver too is a leftover of the British, and hence in keeping with the IA’s and the governments swadeshi initiative, it too should be melted down or auctioned,” remarked a one-star officer somewhat precociously.

Earlier in its zeal to deprive the IA of all flamboyance and splendour, the Ministry of Defence (MoD) had, in 2020, scrapped one of the world’s last remaining horse mounted regiments, known for its dashing equestrian skills and polo playing abilities, and kitted it out with T-72 main battle tanks, instead.

Charge of the 61st Cavalry of the Indian Army. Photo: Jaskirat Singh Bawa/Flickr CC BY ND 2.0

The 300-odd horses of the IA’s 61st Cavalry that had helped its sowars win nine Asian Games medals and a gold medal in the Polo World Cup in the Jakarta 2018 Asian Games, by defeating Pakistan, were disbanded. “All armies need a dash of colour, flash and grandeur which the 61st Cavalry adequately provided,” said a retired cavalry officer. The 61st is now nothing more than another of the army’s 62-odd armoured regiments, he lamented.

On the other hand, the Indian Navy and the Indian Air Force were founded by the colonial administration in 1924 and 1932 respectively, albeit with the appellation Royal, which was done away with after independence. And whilst the former had inherited little to perpetuate from its Royal Air Force precursors, the latter remains infused with Royal Navy traditions, commands and procedures that have simply been nativised like its ensign.

But that, as they, says is another story for later.