How the Historic Pillar of Heliodorus Became Khamba Baba

The story of the Khamba Baba presents a fascinating account of the cultural anthropology of the site in Vidisha.

Some time ago, when I visited the Buddhist site of Sanchi in Madhya Pradesh, on an impulse I decided to travel to Vidisha, about 10 km away, to fulfil a childhood dream. I wanted to see the famous Pillar of Heliodorus (2nd century BCE), a name which inexplicably captured my imagination the very first time I heard it in school and saw its image in my textbook. Heliodorus was an ambassador of Antialkidas, the Greek king of Taxila (now in Pakistan), in the court of the local Shunga prince Bhagabhadra, in Vidisha.

On reaching Vidisha town, I made enquiries about the location of the pillar at the first market I happened to see. Some of the locals I asked seemed a bit unsure, others were plain perplexed. Finally, an old man asked me in a helpful tone, “You mean you want to see the Khamba Baba?” Since the word ‘khamba’ means pillar, I sensed that my Heliodorus Pillar and the old man’s Khamba Baba were one and the same. I followed the directions the old man happily gave me.

One moment you are walking down a congested lane near the northern banks of the Bes River, and then suddenly your range of vision clears – in an open area that has now been fenced in, is the pillar. Khamba Baba, as the over 2,000-year-old pillar is now locally known, is actually a major historical signpost: a witness to the development of India-Greek diplomatic relations; an indicator of the popularity of the cult of Vasudeva; a marker of the development of pillar architecture in India; and a pointer to flourishing trade in the peninsular region.

Vidisha was an ideal site for the pillar in more ways than one. It was a trade hub at the confluence of two important rivers, Bes and Betwa. The place was connected with routes to Pataliputra in the east, Mathura in the north and to the flourishing trade in the west coast. It was also the capital of the western dominions of the Shunga dynasty. The pillar is located next to a Vishnu shrine belonging to the late 3rd century BCE at a place formerly known as Besnagar. The inscription on the Pillar is therefore famously known as the Besnagar Inscription.

Some votive pillars were also found around the site, which, art historian Percy Brown argues, form the earliest known monuments of stone associated with the Hindu religion. They also reflected an understanding of the principles of design. The most important of these is the Pillar of Heliodorus. Historian Upinder Singh says that the Besnagar Inscription reveals “that the Shungas continued the Maurya tradition of entertaining ambassadors from the Greek court.” Interestingly, there are very few instances of the names of Shunga kings being recorded in inscriptions – the pillar inscriptions happen to belong to that select club. Pushyamitra Shunga, who founded the dynasty which replaced the Mauryas, is mentioned in several sources including the Puranas, the Divyavadana (a Sanskrit anthology of Buddhist stories), Tibetan Buddhist scholar Taranatha’s accounts and one brief inscription, while his successors Agnimitra and Vasumitra find mention in Kalidasa’s drama Malavikagnimitra. Otherwise, as historian A.L. Basham says, the Shungas mostly find mention in the jumbled list of kings in the Puranas. 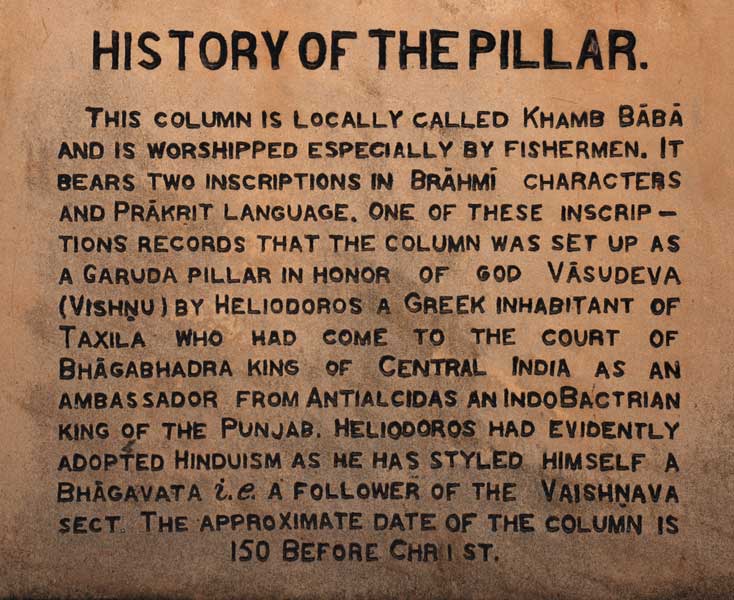 The Archeological Survey of India plaque at the Pillar of Heliodorus. Credit: Wikimedia Commons

Found in its original location, this free-standing votive pillar, measures around 6.5 metres above ground level. It consists of three parts − a faceted shaft, a bell-capital and an abacus which is now in a damaged state. At the base the shaft is octagonal; the middle part is 16-sided, and the top has 32 sides. It shows signs of ornamentation which acquired sophistication in later columns. Brown points out that the carvings on the pillar include festoon designs, a border showing pairs of geese and Hellenistic motifs such as bead-moulding and honeysuckle. He further says that the Besnagar Pillar marks a “definite departure in the treatment of the abacus, which now appears as a large square coffer between the capital and its superstructure.”

Two inscriptions have been found on the pillar. They are mostly in Prakrit and written in the Brahmi script. According to scholar Richard Saloman, the translated text of the first and the more famous inscription reads as follows:

“This Garuda-pillar of Vasudeva, the god of gods, was constructed here by Heliodora [Heliodorus], the Bhagavata, the son of Diya [Dion], of Takhkhashila [Taxila], the Greek ambassador who came from the Great King Amtalakita [Antialkidas] to king Kasiputra [Kashiputra] Bhagabhadra, the Savior, prospering in [his] fourteenth year.”

A very interesting feature of the inscription, as Singh says, is “that Heliodorus describes himself as a Bhagavata – that is, a worshipper of the god Vasudeva Krishna and that he set up this pillar in honour of this god.” The bird Garuda is regarded as the vehicle of Vishnu. The cult of Vasudeva Krishna had originated in the Mathura region and spread swiftly. There is epigraphic evidence indicating the prevalence of the cult, in some form or other, in present-day Uttar Pradesh, Rajasthan, Madhya Pradesh and Maharashtra as well. Soon after, Vasudeva was identified with Vishnu, the benevolent Vedic god. Historian Suvira Jaiswal points out that the history of Vaishnavism involved the gradual coming together of the initially independent cults of deities such as Narayana, Vasudeva Krishna, Samkarshana Balaram and Shri Lakshmi. As the worship of Vishnu developed, it also incorporated the cult of the divine boar prevalent in the Malwa region and seen in its classic form at the Udayagiri Caves close to Vidisha.

The inscription also shows that the cult of Vasudeva Krishna was being patronised by the ruling classes and even foreigners − in this case, the Greeks too were adopting it. Not much information is available about the history of Greeks in India. What is known about them has been learnt mostly through their coins and the legends they bear. The Greeks were denoted by a generic name Yavanas which was possibly borrowed from Persia. In general, we hear about Greek influences on astrology, medicine and drama. One of the Greek kings of Punjab − Milinda or Menander − finds special mention in Buddhism as a patron of the philosopher-monk Nagasena. The Besnagar inscription, however, testifies that sometimes they were even willing to support orthodox sects. Conversely, it also shows how India’s orthodox sects were willing to accept converts.

The story of the discovery of the pillar and its inscriptions is very interesting. When the pillar was first discovered in 1877 by Alexander Cunningham (the first director general of the Archaeological Survey of India), the two inscriptions, on the lower part of the column did not get noticed because of the presence of a thick layer of vermilion smeared on it by the devotees of Khamba Baba. Archaeologist D. Bhandarkar discovered in the course of  a visit to the site during 1914-1915 that the pillar had assumed religious significance from the early 19th century onwards when it was connected to the legend of an “original Baba” associated with a Saiva ascetic called Hirapuri.

As the pillar continued to attract explorers, archaeologists and other enthusiasts, around the beginning of the 20th century, H. Lake, an engineer with the Bhopal Princely State, noticed some lettering on the lower part of the column. Upon clearing the vermilion paste he discovered an important lithic record. Later, as scholars Jack Hebner and Steven Rosen point out, John H. Marshall and Lake jointly wrote about it in the Journal of the Royal Asiatic Society in 1909.  Marshall argued that Cunningham was wrong in assuming that the pillar belonged to the Gupta period and that it was erected much earlier, in the 2nd century BCE. Hebner and Rosen underscore that the dating of the Pillar also set to rest speculations made by some Indologists like Max Weber and N. Macnicol who, based on similarities between the stories of Krishna and Christ, had argued that Vaishnavism was an off-shoot of Christianity. According to them, the pillar constituted “conclusive archaeological proof that Vaisnava tradition antedated Christianity by at least two hundred years.” The story of the Khamba Baba also presents a fascinating account of the cultural anthropology of the site. Gerda Theuns-de Boer, affiliated to the Kern Institute in Leiden, drew upon photographic prints of the pillar available at the institute and in Bhandarkar’s archeological reports to write about the site’s ritual life. In his first report, Bhandarkar traced the beginnings of the cult to an intriguing story of the Saiva ascetic Hirapuri being visited by a person of high distinction. When the ascetic requested the visitor to stay with him permanently, the latter, enchanted by the request, readily agreed to do so – he converted himself into a pillar. Hence the name ‘Khamba Baba’ (literally the pillar saint).

Theuns-de Boer points out that Hirapuri was succeeded by Chandanpuri and then Pratap-puri Gosai, both of whom were pujaris (priests in charge of rituals and offerings) as opposed to their ascetic predecessor. Gosai, who lived on the site during Bhandarkar’s excavations, apparently claimed ownership of the pillar and the area around, saying it was an inam (reward) received from the Gwalior Durbar. Bhandarkar found that Khamba Baba was especially popular among the so-called lower castes, who apparently came to the Baba to seek blessings for the birth of a healthy son. The offerings to the Baba included a mix of red lead and oil, liquor, and, on special occasions, a ram.

The pillar continued to be worshipped in the 20th century as well. Theuns-de Boer points out that Bhandarkar had to clean the column again during his visit in 1914-1915, as is evident from one of the photos at the Kern Institute. Further, he also investigated the part of the pillar which was underground and its foundation by getting the original platform of the structure removed. The tree which grew from within this platform was also cut down. On the basis of another photograph in the institute’s collection, Theuns-de Boer indicates that a new platform was constructed for the pillar. It was like a new monument coming into being. Much later, another archaeologist M.D. Khare excavated the site around 1963-1965 and after demolishing and clearing the pujari’s house he discovered the foundations of an old Vishnu temple belonging to the late 3rd century BCE.

The pillar now falls under the list of protected monuments and the area has been cordoned off a bit. It stands tall and dignified, reminding visitors of the glorious history of the site, the message etched in the second inscription on the pillar adding to its majesty: “[These] three steps to immortality, when correctly followed, lead to Heaven; control, generosity and attention.”

However, among the local inhabitants, the pillar still continues to be popularly known as Khamba Baba, the favourite deity of the fishing communities of the region, especially the Bhois and Dhimars.

Both the Pillar of Heliodorus and the Khamba Baba continue to co-exist in a terrain of multiple narratives, as if knowing that there would always be takers for all its stories – some looking for homely vignettes of devotion, others nursing a lifetime’s fascination for the cadence of the name Heliodorus echoing through time.

Shashank Shekhar Sinha taught history in undergraduate colleges at the University of Delhi. He does independent research on tribes, gender, violence, culture and heritage.