Rights For 'Human Beings', Not Just for 'Men': The Amazing Life of Hansa Mehta

The Founding Mother of the Universal Declaration of Human Rights brought her persuasive powers into action in the Constituent Assembly. The result is for all to see. 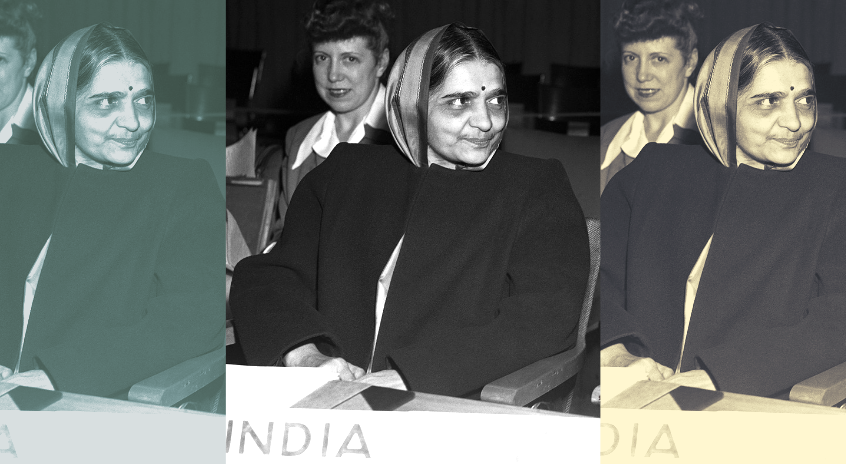 In true Dickensian twist of, ‘it was the best of times. It was the worst of times,’ as the Midnight Hour drew near, those assembled could not contain their excitement.

True, they were saddened by the events outside – vivisection, strife, riots and bloodshed – yet they could not but feel excited at bearing witness to history. Sucheta Kriplani was requisitioned to sing India’s National Song, Vande Mataram, as the Chairman asked all members to stand. The immortal Midnight Hour speech was delivered.

As the session was to conclude, another lady member came to the podium. She addressed the gathering in her distinctively confident voice. The voice which addressed the Central Hall was unmistakable. In 1930, when she, along with Kamala Nehru, had shouted slogans of ‘Inquilaab Zindabaad’ at the New Delhi Railway Station, the British made the train engines hoot non-stop to drown the sound of the slogan.

She handed over the National Flag to the beaming Chairman, a fellow Gandhi lover, and announced in that distinctive voice, to a packed house: “It is in the fitness of things that this first flag that will fly over this august House should be a gift from the women of India!”


On July 3, 1897, to the affluent Manubhai Nandshankar Mehta of Surat, the Dewan of Baroda, was born a little girl who was destined to achieve greatness. In a break from the norms of the times, Hansa Mehta graduated, with honours, from Baroda College. But our protagonist hungered for more.

Soon she was on a ship to England where she would go on to study journalism and sociology at the London School of Economics.  A chance encounter with another powerful lady in London brought her directly in the magnetic presence of someone who this lady loved teasing as ‘Mickey Mouse’.

From London, Hansa crossed the Atlantic on an exchange programme. That she was destined to live and achieve greatness in times to come was perhaps divinely ordained. From San Francisco, when she had set sail for back home, via Tokyo, she was caught in a great earthquake, and the hotel where she was staying was one of the few buildings not flattened.  She finally managed to reach Indian shores via Shanghai, Singapore and Colombo.

Sarojini Naidu introduced Hansa Mehta to ‘Mickey Mouse’ in 1922, while he was lodged in Sabarmati Jail, and it was the Mahatma who brought Hansa into the epicentre of India’s freedom struggle. Hansa was, in her own words, “visibly moved”. 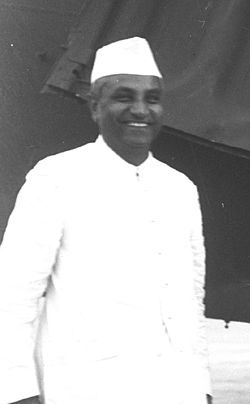 In 1928, Hansa married an accomplished doctor, Jivraj Mehta, who was, for a time, Bapu’s doctor and would one day go on to serve as Gujarat’s first chief minister. Hansa was a Nagar Brahman and Jivraj was a Vaishya Mehta, a caste ‘lower’ than hers. The alliance caused an uproar in her family and community as in those times a woman was expected to marry within the faith and caste. It was the progressive Maharaja of Baroda, Sayajirao Gaekwad III, who intervened and persuaded Hansa’s father to relent.

On Bapu’s advice, on May 1, 1930, Hansa led the first batch of the Desh Sevika Sangh in a satyagraha which involved picketing foreign cloth and liquor shops. Hansa’s political prowess found recognition as she was appointed as President of the Bombay Congress Committee and conferred the nickname ‘Dictator of Bombay’. Hansa was arrested and sentenced to three months in prison. She was released along with the other political prisoners under the Gandhi–Irwin Pact signed on March 5, 1931.

In 1932, Hansa and her till then apolitical husband, were both arrested. Gopal Krishna Gokhale’s The Servant of India reported the arrests with mirth. It informed its readers, “Dr Mehta is not known to be an active politician and his detention in jail can be explained only on the ground of his harbouring a Congress worker in the person of his wife.”

In 1937, with Gandhi’s blessings, this fellow Gujarati made her way to the Bombay Legislative Council.  Her spunk was there for all to see from the very beginning.  Hansa refused to contest from a reserved seat and had taken the general route to the Council which she graced until 1949.

With her entry into the political mainstream, Hansa found herself getting involved with the All India Women’s Conference, rising one day to serve as its President in 1946. In an indication of things to come, Hansa Mehta, as president, piloted the drafting of the Indian Women’s Charter of Rights and Duties – a manifesto for women’s equality.

The Charter started with the telling preambular words: “Whereas we believe that freedom and equality are essential to human developments and whereas woman is as much a human being as man and, therefore, entitled to share them with him”. In a telling inclusion the Charter called for removing any “restrictions to marriage on the ground of caste or community”.

Years later Secretary General of the United Nations, Ban Ki-Moon in 2015 would observe “The world can thank a daughter of India, Dr Hansa Mehta, for replacing the phrase in the UDHR”.

This sentiment was mirrored by his successor Antonio Guterres when commented that “Hansa Mehta of India, for example, without whom we would likely be speaking of the Universal Declaration of the Rights of Man rather than of Human Rights.”

On a Congress party ticket, Hansa Mehta was elected to India’s Constituent Assembly and it was indeed fitting that she found her self in the Sub-Committee on Fundamental Rights, rubbing shoulders with other greats such as B.R. Ambedkar, Minoo Masani and Amrit Kaur.

The Founding Mother of the Universal Declaration of Human Rights had little difficulty to bring that same persuasive power into action to shape and mould India’s charter to usher in revolutionary gender equality. While the world over the suffragettes and feminists had to struggle to push the paper for women’s equality, Hansa Mehta ensured that India’s women were gifted the same through India’s revolutionary constitutional document.

Hansa’s only regret was that she wanted the Uniform Civil Code to be guaranteed as a Fundamental Right. She recorded her strong dissent in the Committee with the words:

“One of the factors that has kept India back from advancing to nationhood has been the existence of personal law based on religion which keeps the nation divided into watertight compartments in many aspects of life.”

Welcoming Ambedkar’s Hindu Code Bill, Hansa Mehta had said, “The new State is going to be a democratic State and democracy is based on the equality of individuals.”

Hansa Mehta had several firsts. She became India’s first woman Vice Chancellor with her appointment at the SNDT University in Bombay. In 1949 she was appointed as the Vice Chancellor of the newly established Baroda University, the first woman to head a co-educational university. Hansa, in her book Indian Woman, strongly advocated equal rights for women in matters of inheritance and divorce.

In 1959, the government awarded a Padma Bhushan to Hansa Mehta. She lived on till April 4, 1995, ending what truly was a remarkable journey.

She had once said, “We have asked for that equality which can alone be the basis of mutual respect and understanding and without which real cooperation is not possible between man and woman.”

It is indeed a national shame that decades later India’s daughters are still left asking for the same thing.