The Time Machine: Frida Kahlo and Her Imaginary Friend

A weekly column aimed at bringing the archives to life. 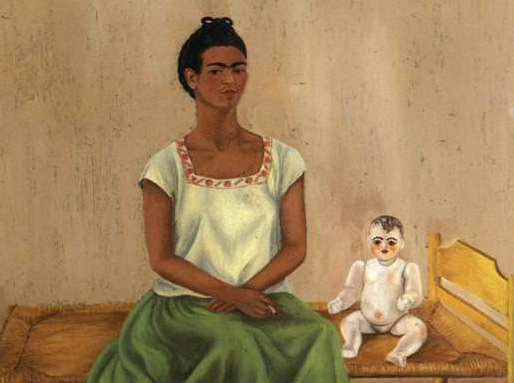 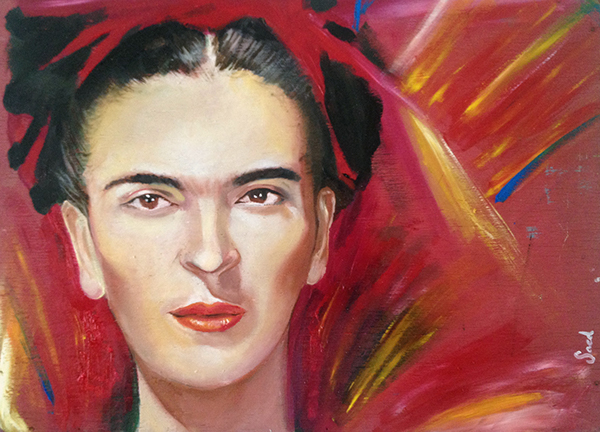 At 8:30 am, July 6, 1907, Frida Kahlo was born to a German and Jewish father and a Mexican mother. The name recorded on her birth certificate is Magdalena Frida Carmen Kahlo – the daughter of Guillermo Kahlo, a photographer, and Matilde Calderón, who one biographer described as a 30-year-old woman “without a profession”.

However, Kahlo insisted on misleading the world and claiming that the year of her birth was 1910 and not 1907. Even her own diary, and subsequent official documents she filled out, record her year of birth as 1910.

In 2013, biographer Gannit Ankori suggested that this deception was grounded in ideological inclinations. 1910 was the year of the Mexican Revolution – the year that the 35-year-old regime of Porfirio Díaz collapsed. Kahlo seems to have wanted to identify herself as a child of the decade of revolution. Hayden Herrera, in 1983, wrote in Frida:

“Since she was a child of the revolutionary decade, when the streets of Mexico City were full of chaos and bloodshed, she decided that she and modern Mexico had been born together.”

In 1932, Kahlo painted My Birth – a visualisation of how she imagined herself being born. Her mother’s body is obscured under a sheet, while Kahlo’s head emerges from her mother’s vagina, bloodying the sheets. Her mother died on September 15, 1932, only a few months after she began painting My Birth. And in July the same year, Kahlo herself had suffered a miscarriage that had nearly killed her. If one were to look at it biographically, the painting is a representation of her own agonising relationship with birth. There is a funereal quality about the painting, with the mother’s head shrouded and her own, adult, head slumped into the blood. It is a visceral depiction of the sense of pain, and of the boldness, that has characterised much of Kahlo’s life. (Incidentally, this painting is now owned by the popstar Madonna as part of her private collection. She has notoriously refused to loan the painting to several exhibitions.) 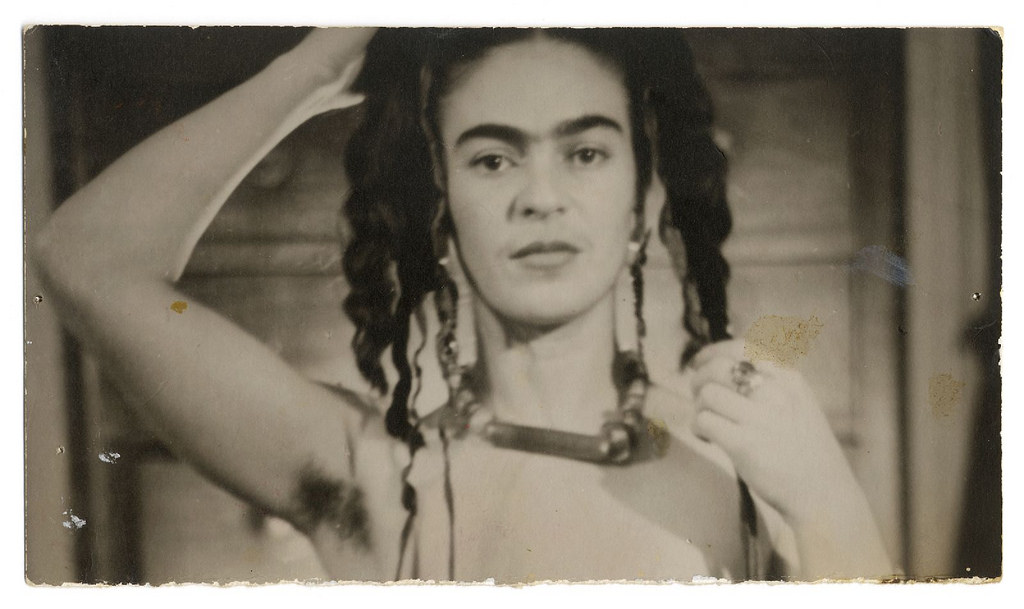 Kahlo’s trials with her own body began early. In addition to her ‘hybrid’ genealogy was the physical limitations that many observers, both contemporary and posthumous, have argued shaped her career as a painter. The life-threatening traumas she suffered in her formative years have been construed to have developed her long and intimate relationship with debilitating pain and deformity. At the age of six, polio kept her in bed for more than nine months, shrivelling up her right leg. It remained in that state her entire life and was aggravated with attacks of tumours, ulcers and eventually gangrene. As Kahlo wrote in 1953, the year her leg was finally amputated, “The little ‘paw’ stayed very skinny”.

The psychological effect was devastating. Her classmates called her ‘Frida peg leg’ as her right leg gave way to a lopsided limp. Ankori points out that coming to terms with this trauma was part of how she began to build her self-image, her identity – through her clothes and her art, her expression of herself was an attempt to “camouflage the deformity.” 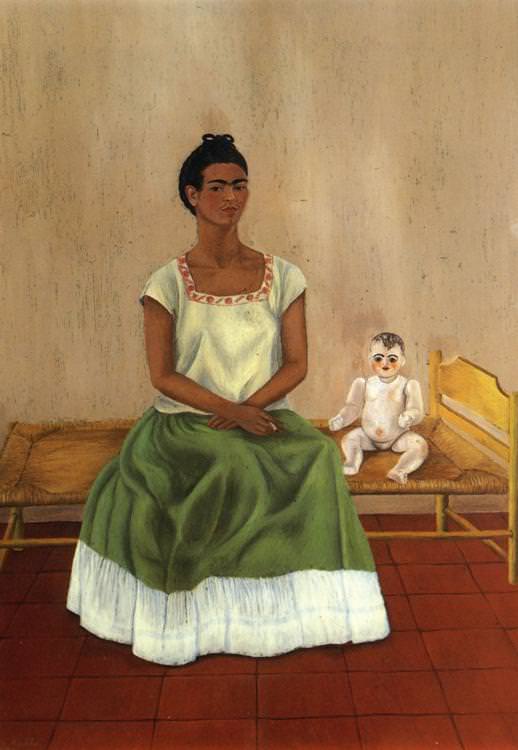 Me and My Doll by Frida Kahlo

Thereafter, at the age of 18, was the second incident – the automobile accident. On September 17, 1925, Kahlo was on a bus which crashed with a tram. The accident killed several people and Kahlo was initially left for dead. The violence her body suffered was unimaginably terrible. Ankori writes:

“Kahlo suffered multiple injuries: her spinal column was broken in three places; her collarbone and two ribs were broken; her right leg had eleven fractures and the right foot was crushed; her left shoulder was out of joint and her pelvis was broken in three places. Most horrifying of all, as the medical records document in chillingly laconic terms, she suffered a ‘penetrating abdominal wound caused by iron handrail entering left hip, exiting through the vagina and tearing left lip’.”

Kahlo spent several months recovering at a hospital. Accentuating her sense of abandonment was heartbreak. Alejandro Gómez Arias, Kahlo’s then boyfriend, did not visit her at the hospital. In fact, he had apparently left for Europe without even saying goodbye. However, Kahlo wrote to him throughout her life, addressing him as Alex, and he remained a close confidant. But years later, during her interviews with Olga Campos in 1949-50, Kahlo had said:

“I was already in a cast, after the accident, and Gómez Arias told me that an uncle was going to take him to Europe and that he would not leave me, but he lied to me. I received a letter from him from Veracruz saying he was leaving. It hurt me very much.”

Kahlo’s struggles with her identity as a broken body heightened after the accident. As did her relationship with society. “Nobody paid attention to me,” she had said much later in her life. It was damnation that she railed against, but also needed to accept. Gómez Arias thought the accident became her identity. In an interview with Ankori in 1989, he had said, “The essential in Frida is a sick woman, intelligent, with a great passion for life beyond her sickness.”

Much of her work seems to be emblematic of this conflict – the process of trying to adopt the brokenness as part of herself while longing to escape its debilitating grasp. The Two Fridas (1939) especially captured this. In 1950, Kahlo wrote of an imaginary friend that she had had when was six, following her illness with polio. This imaginary friend – a girl her age – was agile and happy and could dance. One wonders if that imaginary friend stayed with Kahlo throughout her life, doing all the things that Kahlo wanted to do – she had titled what she wrote in 1950 The Origin of the Two Fridas. But much earlier, in 1926, Kahlo had reconstructed the accident in a pencil sketch and it is here that her imaginary friend first appeared. The sketch is signed ‘Frida and Freida’.

‘The elephant and the dove’

In 1927, Kahlo’s bed-ridden days were finally over. And in 1929, at the age of 22, before her career as a painter took off, Kahlo married an internationally-renowned fresco painter – the 43-year-old Diego Rivera, who was notorious for his tall tales. Kahlo was his third wife.

Consequently, before she could establish herself as a painter, she was already in danger of being overshadowed by the considerable celebrity of her husband. Their marriage certificate describes her as a “housewife”, while Rivera was “artist, painter”. Physically too, the couple was so disparate that Kahlo’s parents had called Rivera an ‘elephant’ and Kahlo a ‘dove’.

It would appear that at no point in Kahlo’s life could she lay claim to an identity without it being challenged in some way. Even her identity as a wife was challenged by the mockery of Rivera’s previous wives and by his infidelities. 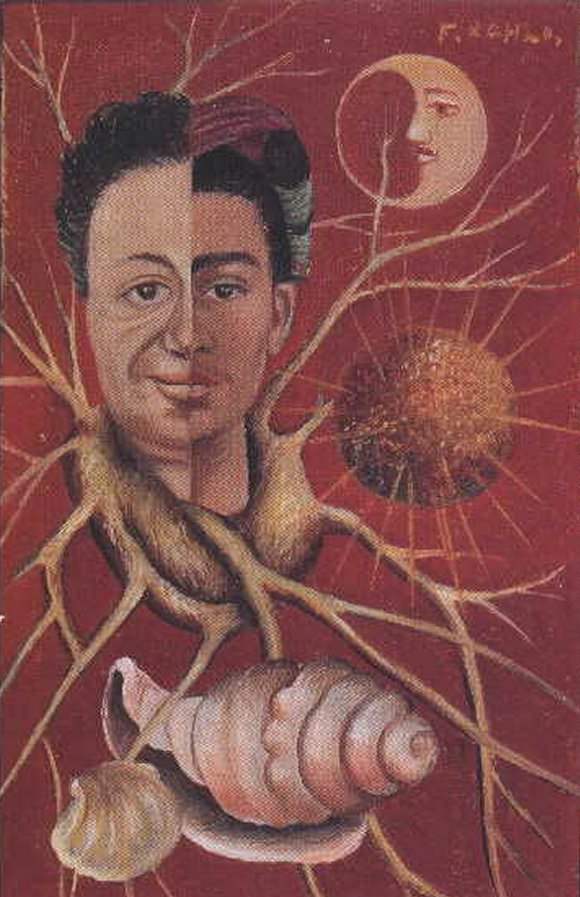 Diego and Frida by Frida Kahlo

Her credibility as a painter is often founded in Rivera’s encouragement. Rivera remained a life-long companion for Kahlo, though the dynamic was often tumultuous, with separation, divorce, remarriage and separation once again. Several biographers have referred to him as a singular influence that pushed Kahlo into painting her self-explorations. But I have a feeling that Rivera might get more credit than he deserves for the Frida we see on canvas. Kahlo’s liaison with art had begun long before, with more humble pencil sketches. And she never made much money selling her art during her lifetime.

The Frida on canvas was a carefully-constructed self, drawing from several of Kahlo’s contesting identities. The most prominent is, of course, the Mexican-ness, that posthumously made her an icon, generating the waves of Fridamania. Her use of Mexican material culture in her own portraits was a deliberate attempt to assert her own identity. They were in stark contrast to a fresco of her made by Rivera, in which her flamboyant native clothing is nowhere in sight – she wears a shirt cut for men and looks somewhat like an adolescent boy with her short-cropped hair in Rivera’s version.

And as Ankori says, she was self-aware during this process of identity creation. A part of it resulted from Western fetishism of native culture. While Rivera and Kahlo were in the US in the early years of their marriage, several accounts of how Kahlo was seen by the Americans were generated and Kahlo found herself photographed quite a bit. One such article about Rivera in 1930, in the Boston Evening Transcript, had said:

“Frida, Diego’s beautiful young wife, is a part of the picture. She wears the native costume, a tight-bodied, full-skirted muslin dress, the classic rebozo draped about her shoulders and a massive string of Aztec beads about her slender brown throat. She, too, is an artist and has her studio next [to] her husband’s. She has a charming, naïve talent and is only another example of the spontaneous artistic expression inherent in the Mexican temperament.”

During her years in the US, she wrote to her family frequently, and in one such letter to her mother shows how amused she was at how the Americans perceived her.

“The gringas really like me a lot and take notice of all the dresses and rebozos that I brought with me, their jaws drop at the sight of my jade necklaces and all the painters want me to pose for them.”

Interesting here, is also the use of the term gringas – white people. She was positing herself as different from them, despite her mixed parentage.

It was in the 1930s that Kahlo grew more invested in her art, producing much of the collection that made her into an icon. But the sense of failure never abandoned her. In her interviews with Campos, she had said, “I have done nothing deserving of acknowledgment in my life.”

“The conclusion I’ve drawn is that all I’ve done is fail. When I was a little girl I wanted to be a doctor and a bus squashed me. I live with you for ten years without doing anything in short but causing you problems and annoying you. I began to paint and my painting is useless but for me and for you to buy it, knowing that no one else will . . .”

On July 13, 1954, she died believing her art meant little to anyone but herself. Most today would vehemently disagree, seeing in her work the life of a woman who simply, adamantly refused to be eclipsed by anything.