‘Anti-national’ and ‘anti-India’ were the vocabulary of the Emergency regime. Today, a new party in power is using the same language to make critics of the government look like enemies of the country. Anti-nationals are everywhere, and every day, a Bharatiya Janata Party spokesperson or commercial TV host identifies more of them at large in India. But even they do not reveal the true extent and history of ‘anti-national’ activity – because the word has been popular in this country once before.

During the Emergency, it was used to target activists opposing the government, especially those that worked with overseas donors, intellectuals and the press to expose the misuse of power in New Delhi. It is another history we are not taught, the history of denunciation, and it leads us to a question: Whether the charge ‘anti-national’ tells us more about the people accused, or about the people who make that accusation. 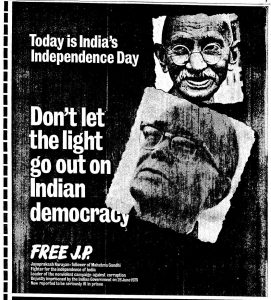 An advertisement for the JP movement in The Times of London on August 15, 1975.

One politician who loves the words ‘anti-national’ and ‘foreign agents’ is Subramanian Swamy. He is an MP in the Rajya Sabha, and has been in and out of parliament since 1974 – the year of the JP movement’s mounting protests across north India, and another year in which the ‘foreign hand’ figured largely in national imagination. If you were to believe Indira Gandhi, Jayaprakash Narayan’s andolan was brewed up in collusion with foreign intelligence agencies, specifically the CIA, which had a record of destabilising Left-wing governments, as it had in Chile and Iran. (Richard Nixon was also notoriously hostile to her, and had been since before the Bangladesh War).

On June 25, 1975, JP’s protest reached Delhi, threatening to overthrow the elected national government. That morning, the prime minister informed the chief minister of West Bengal, Sidddhartha Shankar Ray, that Indian agencies had found links between the protests and the CIA. That night, the Emergency was declared. Right away, thousands of opposition activists, from both left and right-wing parties, were sent to jail; many went underground. Some stayed to organise resistance to the Emergency inside India; others escaped overseas.

In the four decades since, the Sangh (unlike the left) has built up a colourful mythology of its resistance within India. The RSS claims that it marched out in protest, and that its members courted arrest, but tangible evidence for those claims is sparse because newspapers were barred from reporting strikes and processions. There are counter-claims: Subramanian Swamy himself wrote in the year 2000 that ‘most of the leaders of the BJP/RSS had betrayed the struggle against the Emergency,’ and had offered ‘to work for the nation’s tormentors’. Swamy named Atal Bihari Vajpayee and RSS chief Balasaheb Deoras as men who had capitulated and written letters of apology to Indira to get out of jail.

Swamy escaped jail by taking his activism abroad. In his own words, non-resident Indians were ‘horrified at the slander by the present regime against the opposition’, and  needed opposition voices to help them understand what was happening in India. In December 1975, Swamy flew to London, and entered an activist network spread across Kenya, the UK, and North America, that was campaigning with foreign governments, thinkers and journalists to expose the highjack of power in India.

In the words of Makarand Desai, another Sangh exile in London, they were ‘smugglers of truth’. Their best weapon against the Emergency government was negative press. Early on, the New York Times and the Times of London had carried ads demanding JP’s release from jail, signed by dozens of Western intellectuals and mostly left-leaning public figures.

Editorial coverage, however, was often still sympathetic to the prime minister. Two months into the Emergency, on August 24, 1975, four leading US journalists – including from the New York Times and the New Yorker – visited Delhi to interview the prime minister, and give her a sympathetic hearing, for the NBC programme ‘Meet the Press’. Other headlines, in the same week, were along the lines of ‘Mrs. Gandhi Can Now Do What She Wants With the Economy’. Indira Gandhi being interviewed for the NBC programme ‘Meet the Press’ on August 20, 1975. Credit: PD-PIB

Compare this to the headlines in the New York Times six months later, after overseas advocacy went into full swing.

Today, the right-wing is outraged by critical coverage in foreign papers – but in 1976, it was Swamy who was speaking to the New York Times, and a dozen other papers, to brief them about the threat to Indian democracy. Following this kind of advocacy, the US Congress held hearings about human rights in India; similar questions were asked in the UK House of Commons.

The Hindutva ideologue M.G. Chitkara claimed that this overseas activism ‘proved to be one of the decisive factors in upsetting the calculations of the dictatorial regime here’. International pressure on Indira Gandhi probably helped to bring the Emergency to an end in 1977. 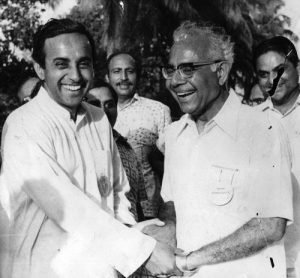 What’s most interesting, though, was Indira Gandhi’s reaction. It will sound familiar to anyone who follows the news today. Speaking to the Times of India, the PM accused Western media of ‘foreign interference’ and called their coverage ‘slanderous and malicious’. In early 1976, Indian embassies were told to compile a blacklist of Indians ‘who indulge in anti-national and unpatriotic activities’ – which really just meant opposing the Emergency regime.

Swamy came in for special attention. T.N. Kaul, the ambassador to the United States, denounced him for ‘false and malicious propaganda’, and in September 1976, a Rajya Sabha committee was formed to investigate Swamy, who was still a member of the house. Its verdict was that he had carried out ‘activities in collusion with anti-India elements abroad to malign our democratic institutions and to provide fuel to the fire of anti-India propaganda by the external enemies of our country’.

That sentence is worth re-reading. Its key phrases – ‘anti-India elements’, ‘anti-India propaganda’, ‘external enemies’ – are words we are hearing once again, still used to make critics of the government look like enemies of the country.

The Emergency was a watershed for trans-national activism, especially for the Hindu right. It was driven as much by left-wing parties and intellectuals, trade unionists, human rights advocates and Quakers – but the legend of the resistance was captured by the Sangh, which also profited the most. Historians Edward Anderson and Patrick Clibbens, whose recent research has informed much of this article, note that ‘some of the most substantive, yet currently overlooked, advances made by the Sangh during the Emergency – in terms of capacity, skills, and networks – relate to the global mobilisation of the Hindu nationalist movement’.

A poster aimed at mobilising support in London against the Emergency imposed by Indira Gandhi. Credit: Wikipedia

Activists, some fleeing arrest and censorship, had been forced to find new bases, funds and media support abroad, and to try and influence foreign governments and agencies against Indira’s regime. Yet when the Emergency ended, those linkages did not. They grew into a widening stream of foreign advocacy and funding for organisations in the Sangh, and continue as such today. According to some reports, the RSS has received millions of dollars in overseas funding, much of it from foreign citizens.  In fact, if any contemporary political force has been fostered and supported by foreign activism, it is Hindu nationalism.

Since 2014, it has been drilled into the national conversation that critics of the ruling party are foreign-sponsored. Yet both national parties receive major donations from “foreign source” donors, even when doing so is illegal. In 2014, when the Delhi high court found the BJP and Congress guilty of violating the FCRA (the same law used to penalise inconvenient NGOs) Arun Jaitley simply amended the law to exonerate political parties, with retrospective effect.

Very little in history is wholly new, and the phrase ‘anti-national’ is definitely not. When these phrases come back, we need to understand them in the light of how they came up before. ‘Anti-national’, ‘anti-India’, and ‘foreign hand’ were part of the vocabulary of the Emergency regime, used against activists defending democracy. Today a new party is in power, but it uses the same language against its critics. The words themselves say very little.

What do Subramanian Swamy and Arundhati Roy have in common? Not much. But the governments that accused them? That’s something to think about.