Our relationship with history is complex which allows destructive forces to use it to their advantage. 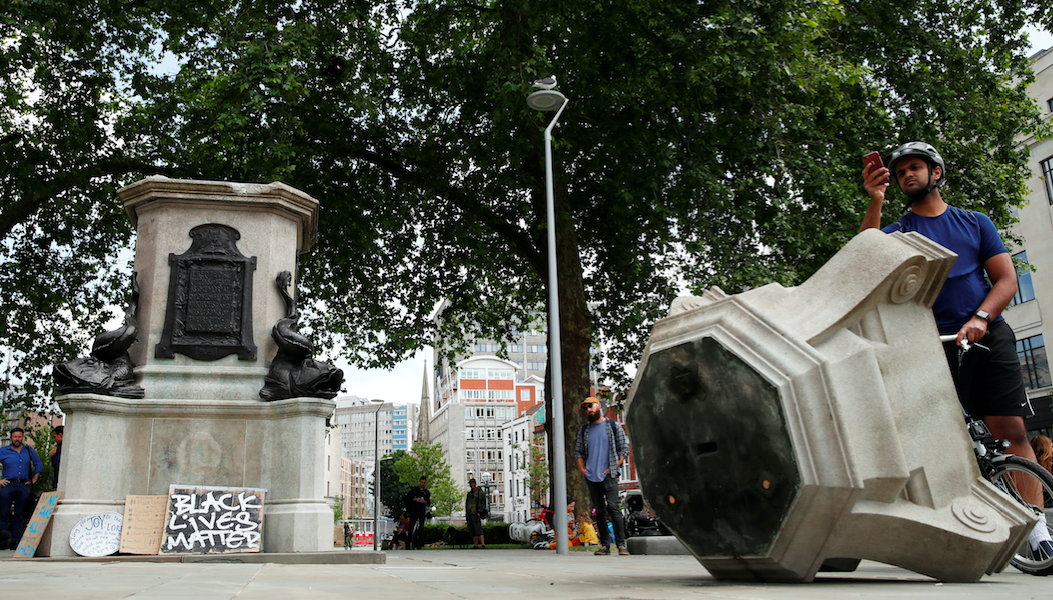 A man observes the base of the statue of Edward Colston, after protesters pulled it down and pushed into the docks, following the death of George Floyd who died in police custody in Minneapolis, Bristol, Britain, June 8, 2020. Photo: Reuters/Matthew Childs

Many Indians will fully support the taking down of the statue of Edward Colston in Bristol. He was a slave trader and no matter how it is viewed, it was despicable and inhuman.

In the aftermath of the killing of George Lloyd by the police in the US, protesters have gone after what they see as a symbol of that sordid practice and Colston certainly was among them. A statue is a public reminder of that past and in this day and age should not stand in a public square, never mind if he also founded institutions in the city.

There is now also a move to remove the statue of Cecil Rhodes in Oriel College in Oxford—Rhodes was a pioneer of the exploitative diamond trade, an imperialist and colonialist and an ardent believer in the superiority of the Anglo-Saxon race.

But he funded a very prestigious scholarship in Oxford and a trust named after him set up a university in South Africa. In the post-apartheid era, Africans think that his statue and legacy should be removed to continue the process of reconciliation—in Oxford, many students agree and post the Colston episode, protests have been held against the Rhodes statue in Oxford. The college is against it. (Ironically, it was white Afrikaans-speaking students who had first demanded, in the 1950s, that a statue of Rhodes in Cape Town be taken down—history moves in intriguing ways).

Also read: What I Learnt at the ‘Rhodes Must Fall’ Protest in Oxford

Indians who support the fall of the Colston statue understand the ravages of colonialism. After all, we felt the brunt of it too.At the same time, this moment compels them  have to confront their own history and grapple with all its grey shades. The debate on colonialism is a continuous one, but even more urgent now.

How does one view our history of the past few centuries? A good place to start is a hidden corner of the Bhau Daji Lad museum in Mumbai (it was once called the Victoria and Albert museum). In a tiny garden patch lie a handful of dismembered life-sized statues of British grandees of the Raj.

Lord Sandhurst, Governor of colonial Bombay at the turn of the 19th century, looks at into space, Marquess of Wellesley, Governor of Bengal and later the British Foreign Secretary, sits forlorn, his head missing, and the Empress of India, Queen Victoria, is unrecognisable with the nose chopped off. At one time, her statue had a magnificent canopy, but it disappeared and later surfaced in the garden of an industrialist.

Next to the museum, in the zoo, named Jijamata Udyan after Shivaji’s mother, (it was earlier named after Victoria), is the resplendent equestrian statue of Edward VII, the Prince of Wales. Thousands of visitors here to see the animals pass it by without a second glance, ignorant of the fact that this is the original ‘Kala Ghoda’ after which the eponymous art district of Mumbai was named. Only a few local history buffs know or care. 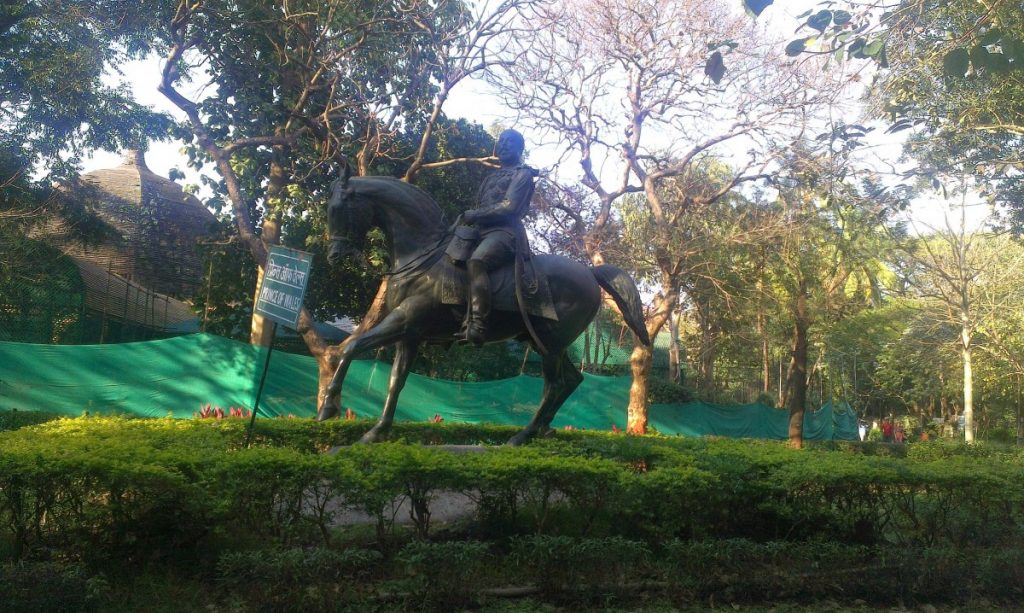 These statues once occupied pride of place in Bombay – sometime after Independence, they were removed and the government, uncertain what to do with them, placed them in their present location. In Delhi, Coronation Park is where the colonial-era statues of the city lie. It is a history best dealt with by ignoring it.

There are very important differences with the pulling down of the Colston statue – and those of Columbus in the US – of course, and the context matters too, but there are commonalities that cannot be ignored.

Wellesley fought in the Anglo-Mysore and Anglo-Maratha wars, which would make him an anti-Indian villain (except that we cannot make up our mind about Tipu Sultan!)

As for the Empress – to whom paeans were read out by prominent Indians in Bombay on her Golden Jubilee in 1887 – how do we evaluate her and her reign? The greatest changes happened in India during her period – the railways were introduced, modern education institutions were set up (many named after her), Bombay – and perhaps other cities – saw the construction of the grand Gothic buildings we are all so proud of. But India was ruled by a foreign power; similarly, Columbus’s advent set off a long period of colonialism in the Americas. 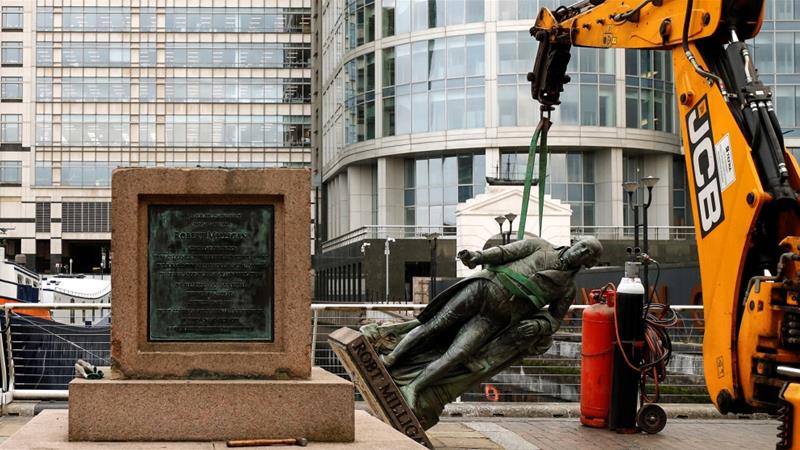 A statue of Robert Milligan is pictured being removed by workers outside the Museum of London Docklands near Canary Wharf, following the death of George Floyd who died in police custody in Minneapolis, London, Britain, June 9, 2020. REUTERS/John Sibley

Many places and institutions exist in India with British era names; some have been renamed but everyone ignores the change. A cabbie will confused if you direct him to Gopalrao Deskmukh Road in Mumbai, but will immediately understand once you say Peddar Road. The Victoria Memorial in Kolkata is the pride of the city, and Delhi still has a Lady Irwin College.

That’s not necessarily being pro-Raj, but it does illustrate how deeply it is embedded in us.

Bombay’s shetiyas in the 19th century cozied up to the Raj and many of them also were involved in the Opium trade – at the same time, they funded large public projects which are still in use. How should we view them?

Similarly, Colston was a pillar of Bristol society and gave away his money to philanthropy.

Coming to the present Delhi residents are up in arms about the proposed destruction of the Central Vista, the glorious path where the Government of India resides. They are convinced – and rightly so – that the outcome will be disastrous on many levels, not the least of them being aesthetic. The process has been opaque, and the cost is completely unwarranted, especially at a time when the government is broke.

Yet, this same vista was built not just by the British Raj, but as a statement of intent to showcase Imperial power. (One might say that the intent is the same now too, but leave that aside for the time being.) Should it stay or go?

The Modi government of course has no anti-imperialist motives – it is motivated by delusions of grandeur and of leaving an imprint on the future and perpetuating the cult of the leader. But it will try and shape the argument differently and that is where it should be opposed—hailing the past is a slippery slope.

The government in power sees the Mughals too as an foreign power—but even if they came from ‘outside’ (as can be argued about every king who invaded a neighbouring kingdom), they settled down in the land and, over the next three centuries, as rulers, did good things and bad, like every other ruler.

The Sanghis don’t see it that way—they abruptly changed the name of Aurangzeb Road, named after the last effective Mughal emperor, whose rule they see as particularly cruel because he imposed a very rigid form of Islam and destroyed countless temples. Historians are divided on that, saying that the evidence about the latter claim is flimsy—only a handful were brought down over 49 years. And many a Hindu king rampaged through Hindu kingdoms too, pillaging everything in sight. 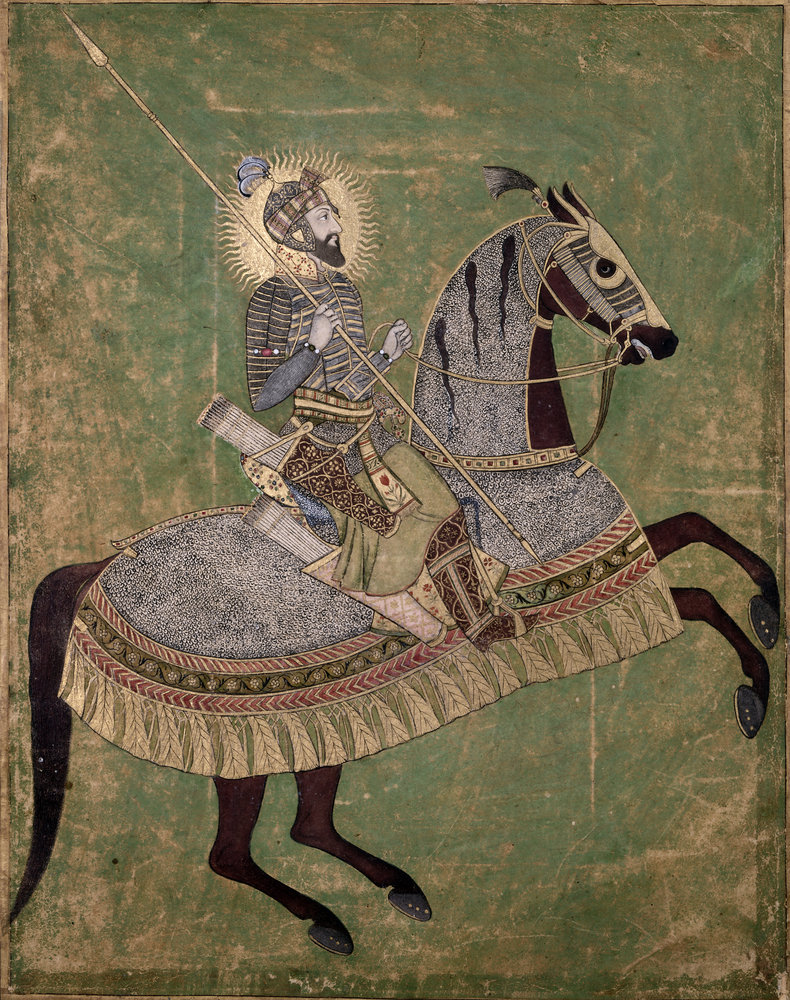 Our view of Mahatma Gandhi is of one who won us our freedom from British colonialism. That is not how they see him in South Africa and other countries on the continent. Students and faculty in the University of Ghana petitioned and got the institution to remove a statue of Gandhi because of his allegedly ‘racist’ views. And our politicians, who go to South Africa regularly and deliver homilies about the Mahatma, will be surprised to learn that the locals – including black Africans – don’t quite see it that way.

The debate on the difference can go on endlessly, but at the root of it is a re-evaluation and reassessment of the past. Should it be preserved, with caveats, or should it be wiped out completely? Why not teach students history, with all its complexities, so that they can understand the past better, rather than make that past disappear, but yet get rid of such blatant public iconography which hurts? A statue is a cruel reminder of the past—but so is the scholarship, which is awarded to a hundred students a year. Should one go and the other stay? Or both should be removed?

A vast number of Indians may think that Aurangzeb was cruel, and so were the British, but there are many who will have a more nuanced take. This government itself is bitterly against the Mughals, but less so against the British – the RSS was not a participant in the freedom movement, whatever it might want to say now.

Which leads us to the most vexed question of them all, very pertinent in today’s India – what do we do about Nehru? He was no racist or communalist or slave trader. He is the builder of modern India, the advantages of which we see all around us. He was liberal, secular and most of all, modern and much loved. Entire generations have grown up as Nehruvian Indians, even if they were born much after he died.

The Sangh parivaar, however, detests him. They always have. The very attributes we love him for, are the ones they hate. They are uncomfortable with secularism and they are definitely uneasy about modernity.

The Modi government will not go as far as to bring down his statues, but they have systematically subverted institutions associated with his legacy, such as Teen Murti Bhavan and the Nehru library and have tried to replace with its own distorted view of history.

Narendra Modi himself rarely mentions Nehru and somehow manages to not mention the great man, even while waxing eloquent about India’s prowess in technology, which was entirely because of the IITs Nehru set up.Narendra Modi’s supporters view Nehru as anti-Hindu and it a Hindutva government now—it can do anything, any time. If they remove all traces of Nehru from India, who will be able to stop them? In the name of ‘correcting’ history, there is a lot of cherry picking to throw out everything that is inconvenient to the Hindutva project–even those who are hardline anti-colonialists need to understand how they could be used — and discarded — by those with their own agenda.

There is no hypocrisy in taking an-anti Colston view while also examining colonialism in a more layered way. Blind antipathy is a slippery slope. The effort should be not to concede ground to those who will apply a perverse logic to justify their own dubious claims about the past with the aim of demolishing the good and replacing it with the bad which may be historically inaccurate and worthless.