London: Entrenched prejudices, preconceptions and pervasive racism of contemporary imperial attitudes meant that nearly 50,000 Indian soldiers who died fighting for the British Empire during the World War I were not commemorated the same way as other martyrs, finds a new review released on Thursday.

Underpinning all these decisions were the entrenched prejudices, preconceptions and pervasive racism of contemporary imperial attitudes, notes the Review of Historical Inequalities in Commemoration’.

UK Defence Secretary Ben Wallace made a formal apology on behalf of the government in the House of Commons in relation to the findings.

“There can be no doubt prejudice played a part in some of the Commission’s decisions,” the minister told the members of parliament.

“On behalf of the Commonwealth War Graves Commission and the government both of the time and today, I want to apologise for the failures to live up to their founding principles all those years ago and express deep regret that it has taken so long to rectify the situation. Whilst we can’t change the past, we can make amends and take action, he said.

We are sorry for what happened and will act to right the wrongs of the past, said Claire Horton, Director General of the CWGC. 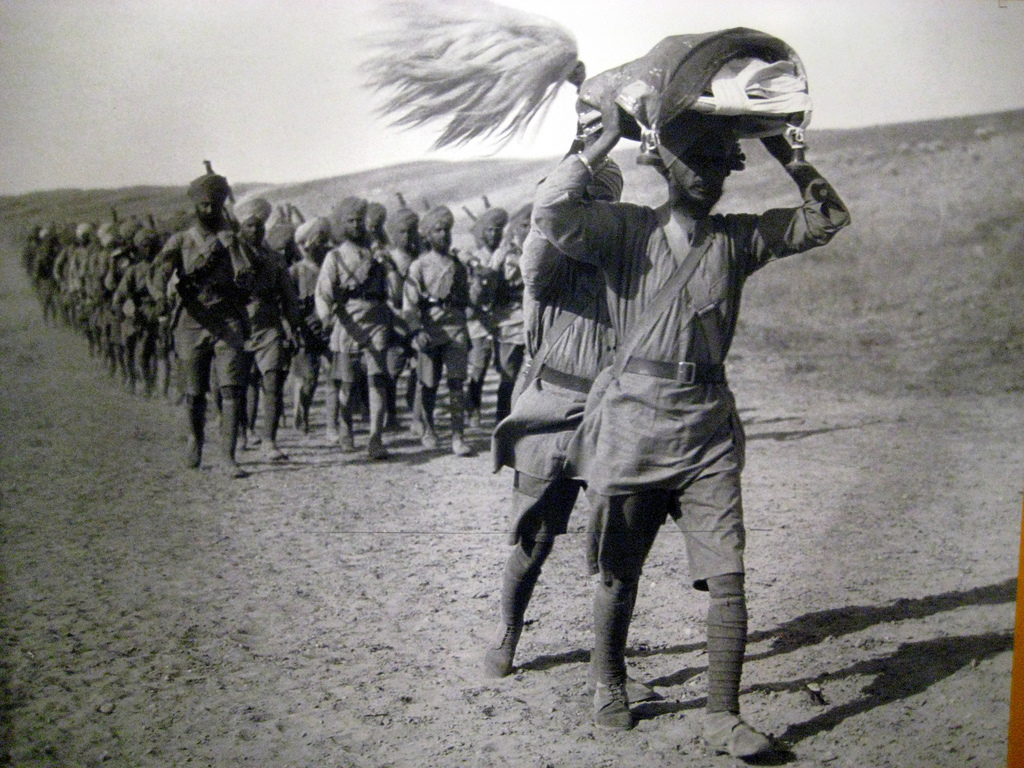 Sikh Regiment of the British Indian Army in Mesopotamia during World War I, being led by Guru Granth Sahib. Photo: File

Our response today is simple: the events of a century ago were wrong then and are wrong now, she said, adding that the Commission would now work on actioning the recommendations of the review.

During the World War I (1914-18), India, which at that time included Pakistan and Bangladesh under British colonial rule, sent the largest share of Commonwealth soldiers to the war effort at over 1.4 million.

Shrabani Basu, historian-author of For King and Another Country: Indian Soldiers on the Western Front, 1914-18 and one of the committee members behind the review, said the most shocking fact that came to light during the research was that nearly 50,000 Indian soldiers had not been commemorated in Mesopotamia, Palestine and Egypt and the sheer callousness with which an Indian Army general had advised the then Imperial War Graves Commission (IWGC), later changed to CWGC, saying that Hindu and Muslim soldiers placed no importance on their names being recorded on graves and therefore they could just be mentioned in memorial tablets.

“From my research, I knew that this was not true at all. They wanted to be remembered,” said Basu.

A Sikh soldier specifically tells his officer that he would understand if he couldn’t be cremated and had to be buried, but he would like his name recorded on a headstone. Another Dogra soldier says that if he is to be buried, his shoes should not be put in his grave. They were particular about how they were treated after their death, she said.

Among the several recommendations set out by the review, Basu highlights an urgent need to find the missing names of the dead and commemorate them.

Also, work must be undertaken with local communities in the relevant Commonwealth countries, such as India, to find not only the soldiers but also thousands of others who lost their lives in the war effort including cooks, cleaners and labourers, Basu said.

Memorials and museums in their memory, in the individual countries where they came from or in the regions where they fought and died, should also be among some of the actions.

The CWGC said that in accepting fully the findings and shortcomings identified in the report and apologising unreservedly for them the commission has committed itself to positive, proactive and inclusive action.

This report will enable us to continue and, ultimately, complete our work to commemorate and recognise all those who lost their lives in this catastrophic conflict, said CWGC Vice-Chairman Lt. Gen. Sir Bill Rollo.

Where names can be found they will be. Where they cannot, the Commission, working directly with the communities affected, will seek alternative means by which their memory can be properly preserved. We will also widen the search to cover both World Wars, he said.

Highlighting the complex situation on the ground, during and after the First World War, the report makes clear that there were several contributing factors.

These ranged from the legacy of poorly marked wartime burials and the treatment of some groups by the military authorities, to the actions and demands of colonial administrations and the impact of contemporary imperial attitudes on the then IWGC’s decision-making.

Though there were clearly unique challenges and difficulties faced on some of the battlefields outside of Europe, there is also evidence that many casualties in these regions were denied named commemoration where it was possible, and some were deliberately treated differently, said Wolfson College Oxford President Sir Tim Hitchens, chair of the Special Committee and CWGC Commissioner.

The implementation of our recommendations would start to put right the wrongs of the past, he said.