Epidemiological studies on the colonial period reveal that between 1896 and 1921, over 30 million people fell prey to epidemic diseases. 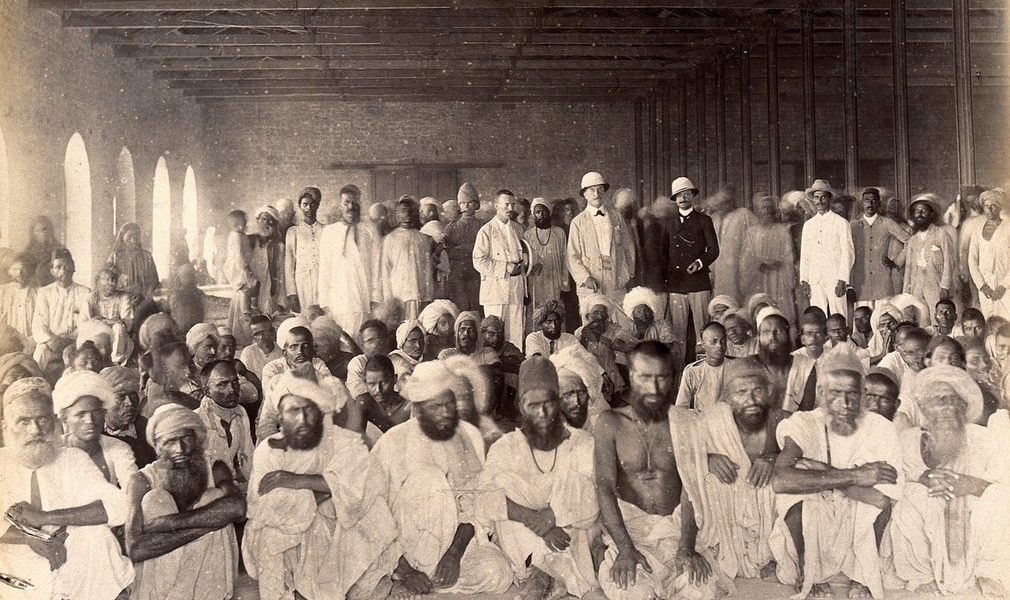 On July 18, 1900, a traveller, infected with a ‘mysterious’ disease, breathed his last on the Banihal road, in what is now Jammu and Kashmir. Unmindful of the cause of the disease, many among a large group of around 4,000 labourers, working on a nearby road, contracted the infection. Three days later, 176 among them died.

Panicked, the survivors returned to their places of residence, carrying the contagion deep into the Kashmir Valley. Meanwhile, tens of Hindu pilgrims visiting the Amarnath cave moved through the infested as well as unaffected villages, thus providing a mobile constituency to transmit the disease. By October, over 4,200 people had succumbed to the disease, the mortality rate as high as 56%. A single unrestrained, perhaps ignorant, victim caused havoc in the entire Valley. He had carried the cholera bacteria from Punjab, where the epidemic had been intermittently raging on since 1897.

Epidemiological studies on the colonial period reveal that between 1896 and 1921, over 30 million people fell prey to epidemic diseases – bubonic plague, cholera, malaria, smallpox and influenza. Of these, about 10 million belonged to Punjab, North-Western Provinces and Bombay.

Punjab often proved to be the epicentre of cholera and plague outbreaks. Between 1896 and 1921, as many as 12 major cholera outbreaks were recorded in this British Indian province, killing 0.25 million people. This figure is exclusive of the fatalities induced by malaria, smallpox, plague and influenza.

Also read: How the Epidemic Diseases Act of 1897 Came to Be

However, it was the 1896 plague in Bombay that proved to be the deadliest of all. As the plague spread to other provinces, nearly 12 million people across the country were wiped out, causing an acute social disorganisation. A catastrophe of such magnitude forced the colonial government to propose drastic measures towards combating epidemics. The Epidemic Diseases Act, 1897, which still lingers on as an archaic reminiscent, was the outcome of these proposals.

Congruent to this, spies were appointed for reporting the diseased cases; raids were arranged on residences housing suspected patients; affected villages were cordoned off and the residents evacuated to makeshift camps. Village officials were made responsible for providing food and other necessities to the quarantined victims. Interestingly, the Maharaja of Jammu and Kashmir instituted a policy wherein those who reported cases of arrival of infected persons into his territory would be monetarily rewarded and those concealing the cases would be punished.

However, the containment of epidemics did not depend only on the state action; it also depended on the public response. Sure enough, the very existence of colonial and ‘native’ autocratic structures is closely linked to the major tangible causes (mass pauperisation, primeval medical infrastructure, poor sanitation, scarcity of clean drinking water, educational backwardness, etc.) behind the massive reported fatalities. The colonial stereotyping of people as ‘notoriously filthy’, ‘insensible’ and ‘savages’ also played a part. 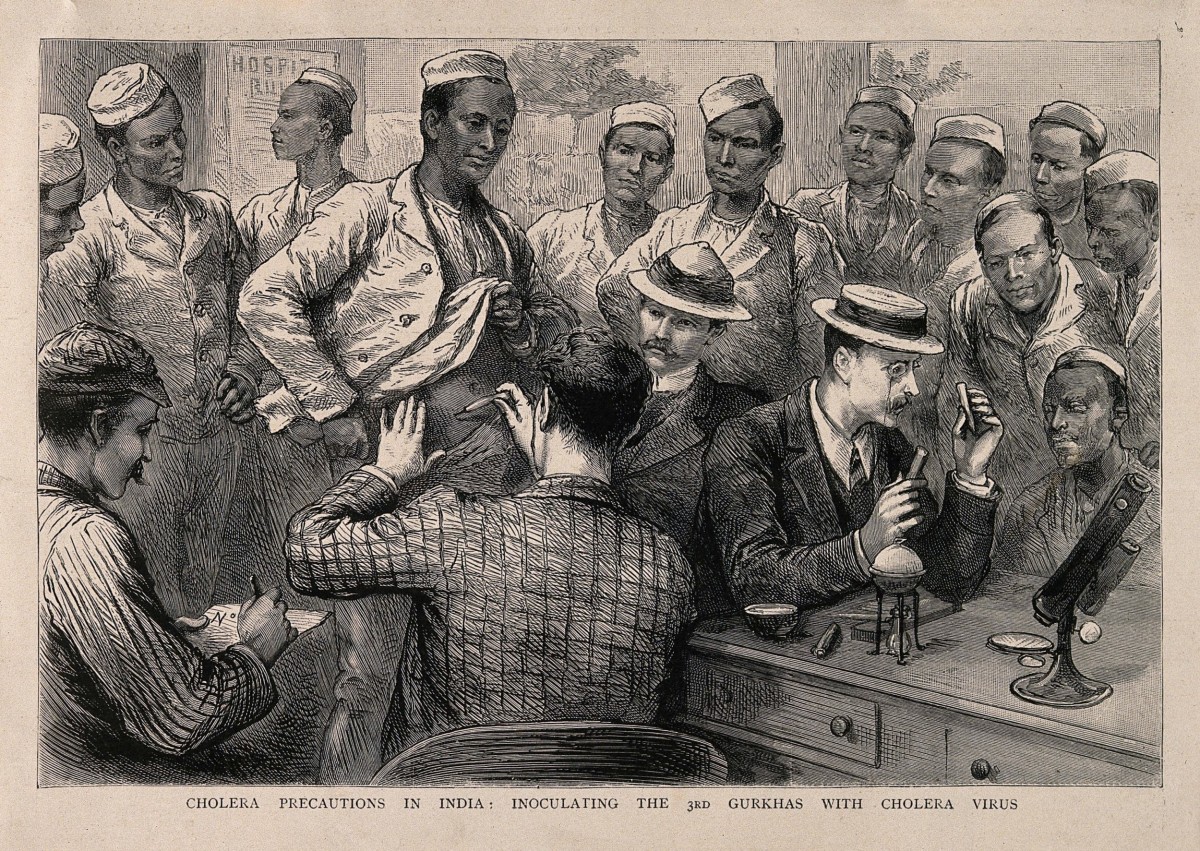 Cholera vaccination of the Third Gurkhas in India at the time of the 1893 epidemic. Photo: Wellcom Collection/CC BY-SA 3.0

However, there were other factors too which greatly contributed in obstructing the containment of epidemics. These included mobility, congregation and concealment on the part of the people, factors that are to a large extent still responsible for the spread of pandemics.

Back then, mobility of labour was an unceasing phenomenon as were congregational habits. Although the state would take measures to curtail the movement of people across affected-unaffected regions, it could not enforce a complete lockdown as that would have cost the colonial exchequer dearly. What stretched out the sphere of epidemic-affected areas was the introduction of modern transport.

Concealment, on the other hand, was also a severe problem that the administration had to deal with. It essentially nullified the containment of outbreaks at their source. But why concealment? As David Arnold, in his study of epidemics in colonial India, has argued, ‘Indian resistance to plague measures revolved around bodily evasion or concealment’ to evade “intrusive” state medical and sanitary measures. Other studies, such as that of Ira Klein and Sasha Tandon, too, show that the peoples’ opposition to the governmental “interference” during epidemics led to an aggravation of the crisis.

Interestingly, the fear of forced isolation and the stigma attached to being a carrier of the disease induced people to smuggle out their symptomatic relatives to ‘safer’ areas, hide them in attics, inside cupboards, under furniture, or in secret rooms whenever the state’s search parties showed up. Some of these tactics still reverberate in our society.

Such a response was, in part, triggered by the belief among Indians that epidemics signified the Divine’s way of punishing rampant sin among the people. Orthodox Muslims feared that “surrendering” to anti-epidemic measures was against the principle of taqdeer (predestination); Brahmans feared for their caste; Rajputs and Muslims could not let their women be seen without pardah; Jains, with their utmost belief in ahimsa, loathed the idea of killing rats during Bubonic plagues.

In part, it was the result of how infected victims and dead bodies were mishandled by the colonial troops deployed for the purpose of rounding up patients and disposing off corpses. Mandatory inspection of corpses by heath officials necessitated their detention for a long time, something the people perceived as ‘condemned by religion.’ People would even resist inoculation, believing that it caused ‘destruction of sexual powers’ and the colonial state wanted to emasculate and enslave them. In some plague-hit pockets, riots took place (for instance in Gurdaspur, Patiala and Sialkot in 1901) as the people refused compulsory hospitalisation and quarantine.

The question, therefore, is: have we, as a people, evolved into enlightened beings given the fact that so many cases of concealing travel history and evading quarantine have come to the fore? Are we willing to learn from history? If anything, the historical evidence and the current crisis has brought home the message that not only do we need much better medical infrastructure and legal instruments but, more importantly, the development of a specialised educational programme that aims at preconditioning the peoples’ response and eliminating the cognitive bias during pandemics.

Suhail-ul-Rehman Lone, specialising in agrarian studies, has a PhD from the Department of History, Aligarh Muslim University, and can be mailed at suhail.r.lone@gmail.com.