The experiences of Indian carpenters during the British Raj raise several questions that have contemporary resonances. 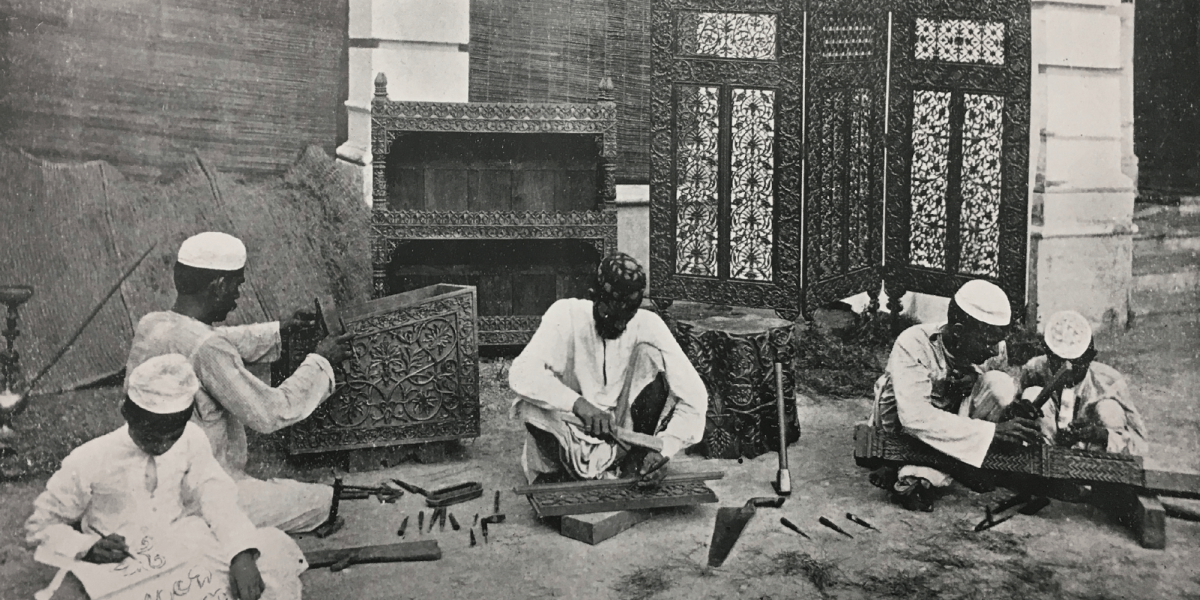 Wood carvers in a British-run workshop in Allahabad, c. 1903. Source: Maffey, A Monograph on Woodcarving in the United Provinces of Agra and Oudh, 1903

This article is the first in a series on the history of labour in India.

Carpenters, along with blacksmiths, goldsmiths, brass smiths, and masons, have formed the core of India’s artisanal groups since ancient times. Today, carpentry is an occupation that India’s Skill Mission aims to dignify so that young people learn the trade in various Industrial Technical Institutes (ITIs) as their career choice. A tension that characterises carpentry is the learning of the trade itself. Can the trade be learned in classrooms? Or can it be learned only in workshops, though on-site practice? A product of modernity, colonialisms and standardisation, this tension characterises the incomplete transition of carpentry from a mere trade to a modern profession. 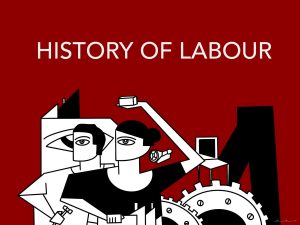 The trade of carpentry transformed significantly in the last 200 years, especially as a result of its interaction with the British colonial state and colonial infrastructural projects in India. Print culture, educational institutes and a wider demand for carpentry skills transformed the trade as knowledge and as a practice. Unlike the handloom weaving industry, which saw a contraction and decline in the 19th century due to factory-produced clothes and colonial economic policies, the trade of carpentry saw expansion in this period. Carpenters were in huge demand from the late 17th century as various regional states and the East India Company sought to secure forts during the political tussles that followed the slow disintegration of the Mughal Empire.

The building of Fort William in Calcutta—a gigantic infrastructural project requiring labour of more than 10,000 workers at its peak—required a large number of carpenters and other artisans. The Company used its newly acquired political power after defeating the Bengal Nawab in the Battle of Plassey (1757) to make the employment of artisans outside the Company illegal and punishable. To avoid any delays on the fort, it sent parties into interiors to recruit artisans forcefully.

While labour was being subordinated to the colonial economy for building army barracks, colonial buildings, roads, railways, bridges, and canals, wood became a topic of scientific study and experiments for Royal Military Engineers from England. England’s vast colonies from America and Canada to India and Africa offered varieties of woods on which colonial civil engineers wrote papers since the early nineteenth century. Some of these experiments on timber resistance capabilities and their suitability for bridges and housing were published in The Elementary Principles of Carpentry (1830) by Thomas Tredgold. More specifically, in India the Thomason Engineering College in Roorkee, the first engineering college of India (the present day IIT Roorkee), published the Roorkee Treatise on Carpentry, which was taught to civil engineering students at the college and to various artisans of Industrial and Technical schools. The latter were trained to work for infrastructural projects of the colonial state. 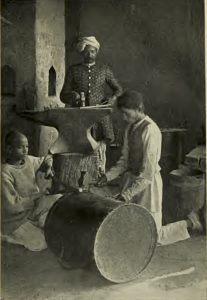 Cawnpore school for trades. Source: The University of Göttingen

Artisans at industrial and technical schools were taught not only the quality of woods and their scientific properties, but also the operation of lathes for woodturning and fret-sawing machines for wood-cutting. Lucknow Industrial School was one such place where carpenters were trained for the local locomotive and carriage railway workshop. The emphasis on machines, textbook reading, and classroom learning along with workshop training, meant that carpentry as a trade was no longer the same. A hierarchy was created between carpenters who used ordinary hand tools and usually worked as individuals in villages or in small urban workshops, and carpenters who worked with machinery, especially in large and colonial, state-run factories.

In the post-1857 period, carpentry became one of the most prominent industrial skills coerced in Indian prisons, as the British Indian state sought to use the labour of convicts to fulfil its high demand for wood products. Outside of prison walls, skilled carpenters were in demand in the rapidly expanding railway workshops of the subcontinent, in regional public works departments, and in private industry.  Urban centres like Lucknow required carpenters who worked for the railway workshops and carpenters who worked in bazaars, leading to an intense competition for skilled workers and high wages. 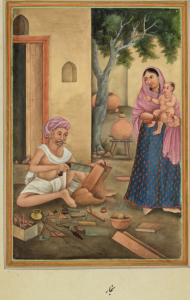 William Hoey, a License Tax Officer in 1879-80, writing about Lucknow carpenters (barahis in Hindi and najjārs in Persian) remarked on the variation between wages of a high skilled building carpenter (6-8 annas a day; 16 annas = 1 Rs.) and an ordinary carpenter (3-4 annas a day). A typical master-carpenter owning a workshop hired several journeymen and apprentices. In 1906, S.H. Fremantle, a labour inquiry officer, commented that the Lucknow railway workshop could not find skilled carpenters locally and imported 400 carpenters from Punjab at an average wage of 14 annas per day (8 annas for local carpenters). Conversely, the aligned trade of wood carving faced a major decline. Facing the loss of state patronage, as well as new English trained Indian elites’ preference for a colonial style of inornate furniture, wood-carvers struggled to sustain their trade. The British commissioned wood carvers only when they had to show the glory and the extent of their empire in local and international art exhibitions.

By the 1870s, carpentry was increasingly targeted by industrial reformists, who organised formal technical education programs that were meant to modernise Indian trades. Theoretically, these programs sought to make Indian products more competitive against imported goods, though they were also often designed to ensure that regional artisans met the needs of the state. Carpentry was taught in regional arts and industrial schools ranging from prominent, large-scale institutions like the Mayo School of Arts in Lahore to small-scale, charitable industrial schools and orphanages. It often formed the backbone of the industrial training programs of these smaller schools, which sustained themselves in part by selling furniture, decorative wood products, and other materials produced in their training workshops. Nonetheless, most carpenters continued to train in apprenticeships, often learning from a local master carpenter in his workshop.

Also read: Why the Coolie Was a Central Figure in World War I 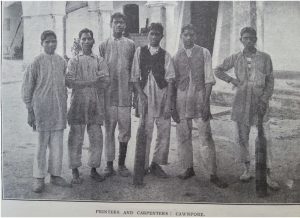 For instance, in 1877 the Rampur State orphanage hired a 25-year-old carpenter named Abdul Rahman (b. 1852-d. 1937) to instruct the resident boys in carpentry. Abdul Rahman was one of several artisans employed by the orphanage to teach industrial skills with the aim of giving the boys trades to prevent poverty in their adulthood. While Abdul Rahman taught within an increasingly institutionalized model of industrial training—the orphanage-cum-industrial school—he personally had trained in an apprenticeship model. Indeed, he likely trained under his father, a local carpenter who led his own workshop. Abdul Rahman’s work, training, and involvement in industrial education are reflective of the intersections and overlaps in different models of artisan education and production. While he remained employed as a carpenter at the orphanage for most of his life, he was also known in the city for his skill in lacquering and carving, and he earned additional income by carving sitars for the city’s prominent musicians.

An example of how carpentry may have been taught both in the context of the orphanage-industrial school and in the context of local apprenticeship models is the Urdu-language Lakṛī kā Kām sikhānwāyi kitāb (Woodworking educational book). Printed in Kanpur around 1905, the manual was part of a series on artisan trades released by the Islami Press, commissioned by a major regional merchant associated with the press. The carpentry manual was attributed to “agents of the prominent workshops” in Kanpur, suggesting that regional merchants and workshop managers shared an interest in developing specific skillsets among north Indian carpenters.

The text emphasized the technological adaptability of Kanpur’s carpenters, and promoted a narrative of an ideal carpenter as one who could incorporate both “Hindustani” and “Inglistani” methodologies in his work. It recognized that much of a carpenter’s knowledge, whether taught in an apprenticeship or an industrial school, was communicated orally, and relied on physical practice and embodied knowledge. After all, it claimed “to write the full work of carpentry would require a long time, and pages upon pages.” Nonetheless, it argued that compiling some textual information on carpentry was useful, particularly for introducing some of the more “unusual” practices “invented by Europeans.” Throughout, it emphasized the importance of knowing “Hindustani models” alongside those from “Inglistan” or “Europe,” arguing that the mark of a truly skilled carpenter was knowing when to apply each. 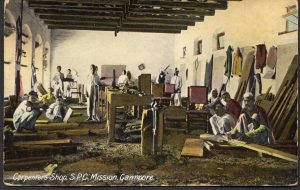 For the merchants and workshop-owners who supported the printing of the Lakṛī kā Kām sikhānwāyi kitāb, the mark of a carpenter’s modernity was his ability to move fluidly between “Hindustani” and “Inglistani” models of work. But for many officials within the colonial state, the idea of such fluidity was anathema to their understanding of Indian artisan practices. Some, such as J.L. Maffey, the author of a 1903 monograph on wood carving in the United Provinces, argued that Indian “tradition” was lost when carpenters worked in “European” styles and methods, and that the trade required “re-Indianization.” Conversely, others lamented the supposed failure of Indian carpenters to embrace “modern progress,” represented by new tools, techniques, and models of education. In both cases, they claimed, any artisanal agency or ability to adapt multiple styles and practices was lost.

In these competing colonial narratives, carpenters were portrayed as subject either to the pressures of Europeanized elite taste, or to the bonds of tradition. But texts like Lakṛī kā Kām sikhānwāyi kitāb, and experiences like that of Abdul Rahman, suggest that carpenters made both artistic and economic decisions that reflected their own flexibility, moving between multiple models of education and multiple woodworking styles.

The experiences of colonial-era carpenters raise several questions that have contemporary resonances. What should be the role of the state in training artisans, particularly in fields like carpentry that are often in demand for state projects and in private industry? The unevenness of wages that define any manual labour occupation in present-day India requires our attention as both the training and desire to be trained as carpenters is contingent on economic factors and social status. The collective story of carpenters is not just one of economic displacement but also of social displacement. In ancient and medieval India, some carpenters had access to royal patronage, with artisans living inside walled cities and close to royal power. But from the colonial period, carpentry became an expanding trade wrought with new hierarchies, with many with artisans positioned as manual labour living on the margins of social and physical space.

Dr. Amanda Lanzillo is a postdoctoral fellow with the Princeton University Society of Fellows, and lecturer in the Princeton department of history, where she writes and teaches on South Asian history. Follow her on twitter @lanzilloamanda

Dr. Arun Kumar is an Assistant Professor of British Imperial, Colonial & Post-colonial History at Nottingham University. He writes on the modern history of India. Follow him on twitter @arun_historian.