Brinkmanship Versus Statesmanship and the Slippery Slope to War and Violence

For many decades, psychologists have tried to answer this question: What makes a regular ‘next door neighbour’ transform into a rapacious demon and kill without mercy or remorse? Only a minority of Battalion 101 members refused to participate in the killings. Credit: Wikipedia

War and violence in any form, are bad for several reasons, but most reprehensible of them is the absolute degeneration of qualities that differentiate humans from animals. Empathy, compassion, kindness and such traits which facilitated human collaboration to create the world we know, is replaced with behaviour associated with feral animals. Ordinary, law abiding, god-fearing family men go on a merciless rampage, plundering, raping and killing. We read about mobs lynching a mentally challenged victim, or a police officer brutally raping and slaughtering a child and wonder – who are these people? Are they even human?

The shocking answer is – they are as human as we are and therefore by corollary, our virtuous conduct is just a thin line away from the evil that lies latent in most of us. What makes a regular ‘next door neighbour’ transform into a rapacious demon and kill without mercy or remorse?

For many decades, psychologists have tried to answer that question, using one of humankind’s most shameful acts as their model.

Between 1941-1945, Germany systematically murdered six million Jews, leveraging their industrial prowess to create what was arguably the Nadir of our species – an industrial infrastructure to not only kill fellow humans, but to profit from their deaths. Entire families were rounded up, robbed of their belongings, separated from each other, forced into labour until they could work no more and then killed at an industrial scale. The depravation didn’t end there. Bodies was harvested for personal effects, their hair was sold, gold fillings of teeth were melted into ingots and even the fat of the bodies was used to make soap and grease. The mechanisation of death reached such efficiencies that train timetables to gas chambers were scheduled in manner which would be most efficient.

The question that psychologists tried to answer was – what could dehumanise an entire country to such an extent that they would not only condone – but in many cases, actively participate in genocide. True, the hard core amongst the Nazis loathed Jews. Also true, that many of the SS killers were criminals, psychopaths and hardened sadists. But that still didn’t explain why several million ordinary citizens and professional soldiers would plummet to this level of debasement in literally a matter of months. Almost 80% of the Holocaust victims were killed in just 11 months. While countless and studies have thrown fascinating and counter-intuitive insights into human behaviour, one particular incident is captured in a seminal work titled Ordinary Men by Christopher Browning. 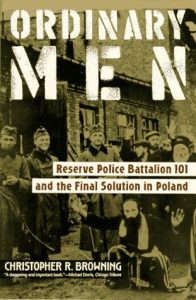 This is the story of the Reserve Battalion 101, commanded by 53-year-old career policeman Maj Wilhelm Trapp. This battalion consisted of middle-aged family men from working and lower middle class background of Hamburg, considered too old to be soldiers, hence drafted into the police who had been sent to Poland. On July 13, 1942, this battalion was ordered to march into the Polish ghetto – Josefow and round up all inhabitants. They were instructed to separate able-bodied men to be sent into forced labour. Most of them would not survive the labour camps. The women, aged and children were ordered to be shot on the spot.

Maj Trapp was visibly anguished by this task and spoke to his troops, most of whom were old men. He told them that though the battalion had this gruesome job, anyone who felt that he wasn’t up to it could step forward. When a lone soldier reluctantly shuffled ahead, junior officers barked admonishments, but Maj Trapp silenced them. Following his lead, only another dozen soldiers mustered the courage to step out from the group of 500. The rest stood steadfast despite the fact that they were raw recruits from Hamburg, one of the most non-Nazified cities of Germany. Maj Trapp assuaged the group by reminding them that their own women and children were being bombed by the allies. The Reserve Battalion 101 went on to shoot every women, aged and child of Josefow.

While there are many treatises on this incident, some insights jump out. Firstly, the extermination of Jews across Nazi Germany did not happen in a slow steady manner. Instead, most of the Holocaust victims, though subjected to torment, were alive from mid-1942 to mid-1943. Then in a sudden blitzkrieg, 80% of them were killed. But in years before that, foundations of de-humanising Jews were laid by socially differentiating them, then physically segregating them, wrecking them economically and finally debasing them to a point where they were not considered worthy of humane consideration.

Secondly, while Poland was the trigger point of the World War and the Polish army put up a stiff resistance, they were annihilated. Some remnants of the Polish army did join the allied effort, but vast majority of Poles were victims of the war. And yet, Maj Trapp goaded his troops by drawing a fantastical blame attribution between the Jews they were about to murder and the Allied planes bombing Hamburg.

» Tabletop strategists please take note, war is not the answer

» India is hurtling down a path of self-destruction

Thirdly, the actual executioners insulated themselves from the horror of their act because they were ‘following orders’, and, thus in their heads, absolved from judgement. Those giving the orders and managing the process were insulated because, in addition to “following orders” themselves; Jews were statistics to be processed with utmost efficiency. The gore and horror did not reach them.

But most important of them all, is ironically known as the “Wilhelm trap”. They key lay in the way Maj Trapp offered his troops a way out before the massacre. He asked those who didn’t want to obey the authorities, to step ‘out’ of the crowd. Psychologists’ debate that the question posed was not about morality of the act itself, but the act of deserting the cohort. That was the fulcrum. They argue that if Trapp had framed the question by asking those who want to participate in the murder to step forward, even a dozen may not have stepped out.

The lessons are obvious.

Those lynching mobs, child rapists and war mongers aren’t from another planet. They aren’t even from ‘other sections of society’, whatever that means. They are people like us. They are us. The line between humanity and bloodlust is thin. Once violence in any form is condoned, society builds immunity to it. Like a frog in boiling water, societies remain oblivious of undercurrents which explode exponentially – with no survivors. (Maj Trapp too was executed after War trials).

We must beware the slippery slopes that precede every ‘spontaneous’ violence, conflict or war. If we don’t, we will make choices about remaining in a cohort regardless of its misalignment with what we know to be right. We know that no petty theft warrants being beaten to death. We know that eight-year-old girls should not be raped and murdered no matter what the justification and we know, that like Indians, most Pakistanis want to live in peace and attend to their life struggles. And we also know that “whataboutery” of the past are not solutions to challenges of the future.

The hope lies with our younger generations because fortunately this slide is not an irreversible process.

A generation after the Holocaust, Germany leads in offering Israelis secondary citizenship. That Germans might do so to mitigate their conscience is understandable, but the fact that most Israelis also choose Germany shows that reconciliation is possible between every conflicting stakeholder. Even between those who have tried to exterminate the other.

History offers the same lessons to all military and political leaders. Generals and politicians focus on waging war and violence. But Field Marshals and Statesmen learn how to prevent war and violence. That is the difference between brinkmen and statesmen.
Raghu Raman is a former soldier. He tweets @captraman and views are personal.