Why the BJP Feels It Has to Appropriate Sardar Patel

The ruling party's embrace of Vallabhbhai Patel, who openly opposed the RSS's subversive activities, indicates the lengths to which it will go to win back the support of Gujarat's Patel community.

This article was first published on November 6, 2017 and is being republished on October 31, 2019 to mark Sardar Patel’s birth anniversary.

It is astounding how the University Grants Commission (UGC) could issue an order to all vice chancellors, which is beyond its powers. On October 27, it directed them to observe Sardar Patel’s birthday on October 31 and to send a compliance report with photographic evidence like some untrustworthy schoolboys. With just three days’ notice, all higher education institutions in India were to organise ‘Unity Runs’, inter-college competitions, dramas, songs, essays; design t-shirts and invite freedom fighters.

This absurd “order” signed by a bureaucrat in the UGC was so far fetched that one deduces that it was obviously meant to provoke a hue and cry from the academics and liberals, who could then be branded as ‘anti-nationals’. An earlier one had actually directed all institutions to place TV screens to hear Modi pay homage to Deendayal Upadhyaya, who was his former party boss, not any national leader. This is strange because Prakash Javadekar actually has a college degree, unlike his predecessor in the HRD ministry, Smriti Irani, and is expected to have more respect for the autonomy of educational institutions. I know him as a  reasonable minister and therefore one concludes that the pressure on him must be too much to refuse.

We need, therefore, to understand why the BJP is so desperate to prove that it alone cares for Sardar Patel. This is exactly what the prime minister said on October 31, that all previous governments had ignored Sardar Vallabhai’s legacy. He forgot that this includes Atal Bihari Vajpayee’s three governments as well. Modi must win back the estranged Patel or Patidar community of Gujarat by using India’s most iconic Patel, Sardar Vallabhai.

Apart from the crude ham-handed manner in which this regime approaches every issue, whether it be the national flag and patriotism and the mandatory Aadhaar card or demonisation and the Goods and Services Tax, this reveals something more and that is panic. After all, Hardik Patel’s dramatic agitation has weakened the BJP’s traditional hold over the Patidar-Patel community. A week ago, on October 22, the Patidar Anamat Andolan Samiti’s north Gujarat convener, Narendra Patel, suddenly claimed that he was offered one crore rupees to join the BJP and said he had proof from his “sting operation”. We do not know the facts in this case, but we do know that it was Sardar Patel who took the strongest steps to check communal forces, represented by the BJP’s forerunners and mentors, the RSS and the Hindu Mahasabha and their Muslim counterparts.

Let us recall what Sardar Patel said and did after Gandhiji’s assassination on January 30, 1948. As deputy prime minister and home minister, he banned the RSS immediately and on February 6 he reassured Nehru that he was taking the sternest of steps and even keeping a sharp watch on the RSS open-air Gita classes to know what was being said. On February 27, he told Nehru that even “government servants in Delhi have already been arrested for RSS activities”. Sardar Patel felt, however, that “it was a fanatical wing of the Hindu Mahasabha directly under Savarkar that hatched the (assassination) conspiracy and saw it through”. He was clear that “the RSS has undoubtedly other sins to answer for, but not this one”. He records that Gandhi’s killing “was welcomed by those of the RSS and the Mahasabha who were strongly opposed to….his policy”. In a letter to Shyama Prasad on the July 18, he declared that “the activities of the RSS constitute a clear threat to the existence of government… (and that) the RSS circles are becoming increasingly more defiant and are indulging in subversive activities throughout India”. 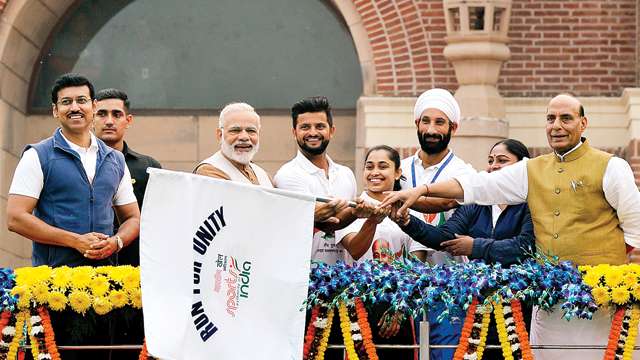 The RSS supremo, M.S. Golwalkar, repeatedly pleaded with Patel to lift the ban but he remained firm for a year and a half. Sardar Patel lifted the ban in July 1949, only after the RSS pledged to abjure violence and secret activities and, more importantly, it finally professed “loyalty to the constitution of India and the national flag” that it had been opposing. Now we understand why an excess of patriotism is being enforced and why the national flag is being bandied everywhere, including movie theatres. They need to make up now. Will these facts about the national hero that it wishes to appropriate be publicised by the BJP or will it stomach everything because the Patels constitute a solid 20% of Gujarat’s voting population?

This new game of snatching national leaders from the Congress pantheon has been necessitated also because the political right-wing is obviously starved of national leaders. The founder of the RSS, K.B. Hedgewar, had deliberately decided not to join Gandhi and the Congress in momentous movements like Quit India. In fact, home ministry records give the impression that the RSS was quite loyal to British masters and caused no problems for them. The other stream of the BJP’s ancestry, the Hindu Mahasabha, had a mercurial leader like Vinayak Savarkar who initially took some part in the freedom struggle but when he was imprisoned in the Andamans’ Cellular Jail, he begged for mercy many times. When the NDA government decided to name Port Blair airport after Savarkar, it deliberately ignored hundreds of other prisoners who suffered cruel detention but never wavered and died in the Andamans.

Savarkar was also singled out for other honours like a special son et lumiere show to smother the role of so many young brave-hearts and honour this rare participant from the Hindutva camp (Savarkar coined the term) in true Goebbelsian style. The second reason why rightists do not have any tall leader is because even after independence they remained quite self-centred and did not participate in most great political upheavals except during the Emergency. Besides, they did not have too many years in power, even in coalitions. Vajpayee obviously stands the tallest but then his angst with Modi over the Gujarat riots is public knowledge. Shyama Prasad Mookerjee is a distant figure but he is from a peripheral state and cannot excite voters either in the Hindi belt or in Gujarat. Vivekananda is often hijacked by those who see only his saffron robe but have no idea how strongly he despised communal fanatics. So the hunt to appropriate leaders goes on relentlessly. Lal Bahadur Shastri is invoked and the “raw deal” he got from the Gandhi family is agitated. But what have stalwarts like Advani, Murali Manohar Joshi or even Yashwant Sinha or Arun Shourie got from Modi? The Swarajya recently discovered Upendranath Brahmachari, whose discovery had eliminated the dreaded Kalazar disease a century ago, and suddenly realised that he was actually a ‘saint’ that Bengal has ignored.

Also read: The Shudras Want Empowerment, Not a Giant Statue of Their Iron Man

Another mediocre archeologist from the Gangetic basin brought out a cut and paste biography of Rakhaldas Bandyopadhyay, who discovered Mohenjodaro, and ticked off Bengalis for forgetting him. More such strategies will surely come before the Bengal elections. Kerala witnessed some real dramatics and every state that has not yet submitted to the Delhi sultanate, to use Modi’s favourite term, shall be undermined systematically, clumsily or with Chanakyan ruthlessness.

The hunt for heroes, both at the national and regional level, continues unabated as the Right just has to fill up the embarrassing vacuum in our national history – at any cost. It needs patriots from wherever, to promote its brand of ultra nationalism. History, however, is rather cruel in this game. Let us now return to Patel and ask the real patriot to please stand up. The statement that he made on December 17, 1948 says it all. Would this government that needs Vallabhai Patel so much and is so fond of slogans like to use his immortal words as a banner? He had said: “India is a secular country and it will be nothing else.”