In the Midst of Mandir-Masjid Dispute, This Man Fights for Ayodha's Buddhist Past

An interview with Vineet Kumar Maurya, whose petition seeking to bring recognition to the Buddhist antecedents of Ayodhya has been accepted by the Supreme Court and clubbed with the title suit.

Note: This piece was originally published on September 4, 2018. The Supreme Court on September 27, 2018 refused to refer to a five-judge bench the Ayodhya land dispute issue and held that the 1994 Ismail Faruqui judgment need not be revisited.

When I first met Vineet Maurya in Ayodhya in 2008, he and his family were struggling to cope with the loss of their farmland to the barricaded acres around the Ram Janmabhoomi complex in Ayodhya. As described in my book Portraits from Ayodhya: Living India’s Contradictions (2012), the families being pushed into financial uncertainty from a position of prosperity led to embrace Buddhism. Maurya has been a Buddhist for nearly two decades and in April 2018, his petition for recognition of Ayodhya as an ancient Bauddha Vihar (Buddhist settlement) and for Buddhist artefacts excavated from the disputed site at Ayodhya in 2002-2003 to be declared as national heritage and brought into public view, was accepted by the Supreme Court. On July 23, the court ruled for this petition to be heard along with the main arguments in the decades-old Ayodhya title suit.

The disputed site at Ayodhya, emblematic of the divisions that have gripped Indian society in the past quarter of a century, continues to be the subject of a title suit presently being heard in the Supreme Court. A British district judge ruled in 1886 that it was too late to decide on the dispute over a mosque being built over land that had once been a temple, as it had occurred 356 years ago. Since then, there have been many twists and turns in the legal history of the dispute.

The Allahabad high court judgment in September 2010 was a contortionist’s delight, dividing the disputed 2.77 acres of land into three parts represented by the Hindu Mahasabha, the Nirmohi Akhara and the Sunni Wakf Board respectively. While this was clearly an attempt to address the huge burden of both Hindu and Muslim sentiment that hangs over the case, it failed to assuage the parties concerned, who appealed against the judgment in the Supreme Court.

The protracted campaign for a Ram temple at the disputed site – by the VHP and other Sangh outfits – has turned what is essentially a property dispute into a communal flashpoint, repeatedly invoked during elections. But Ayodhya itself is a town revered by many faiths. For the Jains, it is the birthplace of five tirthankaras. Sufi shrines abound Ayodhya, most notable among them the Dargah Naugazi, Dargah Teen Darvesh, the shrine to Badi Bua, sister of Hazrat Khwaja Nasiruddin Chiragh Dehli and Dargah Sheesh Paigamber. Vineet Kumar Maurya’s petition seeks to bring recognition to the Buddhist antecedents of Ayodhya. In this conversation, he talks about what he wants for his beloved Ayodhya.

Have a number of organisations got together to file this petition, or is it your initiative?

This is my personal petition. There are no organisations attached. The Buddhist significance of Ayodhya has been the subject of study and discussion by many, but I felt it was important to take legal recourse.

What have you submitted in court in support of your claims? 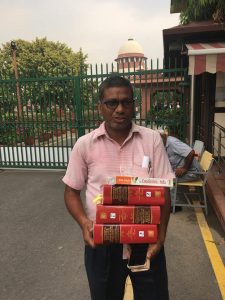 All submissions in court have been made on the basis of excavations carried out by the Archaeological Survey of India. There have been three rounds of excavations in Ayodhya, the most recent being in 2002-2003. There are 186 pits that have been dug to search for the remnants of earlier structures. So far, only 50 have been properly searched and yielded remains. The rest still have to be examined. Out of these 50, ample evidence has emerged of a large Bauddha Vihar or Buddhist settlement, of considerable antiquity, at the site.

This is the basis of my petition. The court must have seen some merit in this. I filed the petition on March 6, it was accepted on April 4 and hearing commenced in July. During the first hearing, the government of India counsel did not appear, but when they came for the second hearing on July 23, the court ruled for this petition to be heard by the larger bench hearing the Ayodhya title suit. That reassured me that the learned judges must have found some merit in the points raised by my petition.

But haven’t there been earlier attempts to intervene in the Ayodhya case?

There have been many attempts to intervene in the main Ram Janmabhoomi-Babri Masjid dispute or title suit. Around 13 such attempts have been rejected by the SC, including appeals by Subramanian Swamy, Teesta Setalvad and Udit Raj. I did not file my petition as an intervention in that dispute at all. Mine is a fresh petition, asking for relief which directly affects the common good. I have no interest in getting into the old dispute over land.

So, what are you asking for, if not for the same disputed land to now be declared a Buddhist site? To any ordinary person, it may seem as if you are adding one more complication to an already complicated scenario.

Not at all. The artefacts that have been recovered from the excavation in Ayodhya have been declared to have Buddhist origins by ASI authorities. In fact, they have been found to be similar to those found at Shravasti. I have petitioned the government because I believe Ayodhya will benefit greatly if it is declared to be a national heritage site of importance to Buddhists, on the lines of Shravasti and Kapilavastu, Sarnath and Kushinagar.

Bringing the artefacts found during the excavations into public view in Ayodhya, cultivating Ayodhya as an international tourist destination for Buddhists will bring much needed development to this town. After all, the value of the Buddhist remnants found in Ayodhya is no less than those found in Shravasti or Sarnath. If the artefacts and remains are not declared to be of national importance, then their value will diminish. Both have been examined and certified by the ASI. My petition is not an opportunistic attempt to enter the highly charged controversy of Mandir-Masjid. It is an attempt to find a means to work for the betterment and development of Ayodhya.

Be that as it may, you must surely have rubbed Hindutva groups the wrong way with this petition and its acceptance in the SC. Have there been any threats to you since then?

Oh yes, the first threat was received that very evening of March 6. I have been asked to leave Ayodhya, received abuse and a threat to my life. Someone from an organisation called Vishwa Brahman Mahasabha rang me and alleged that I was receiving funds from ISI. I knew this was an inevitable part of my petition. I accept that if anything happens to me, someone else will take up this cause. The Buddhist heritage of Ayodhya is important for our nation and it will surely receive rightful recognition.