A Historian and Her Archives

As a historian, my experience in the archives has been fascinating, confusing and illuminating, often all together. 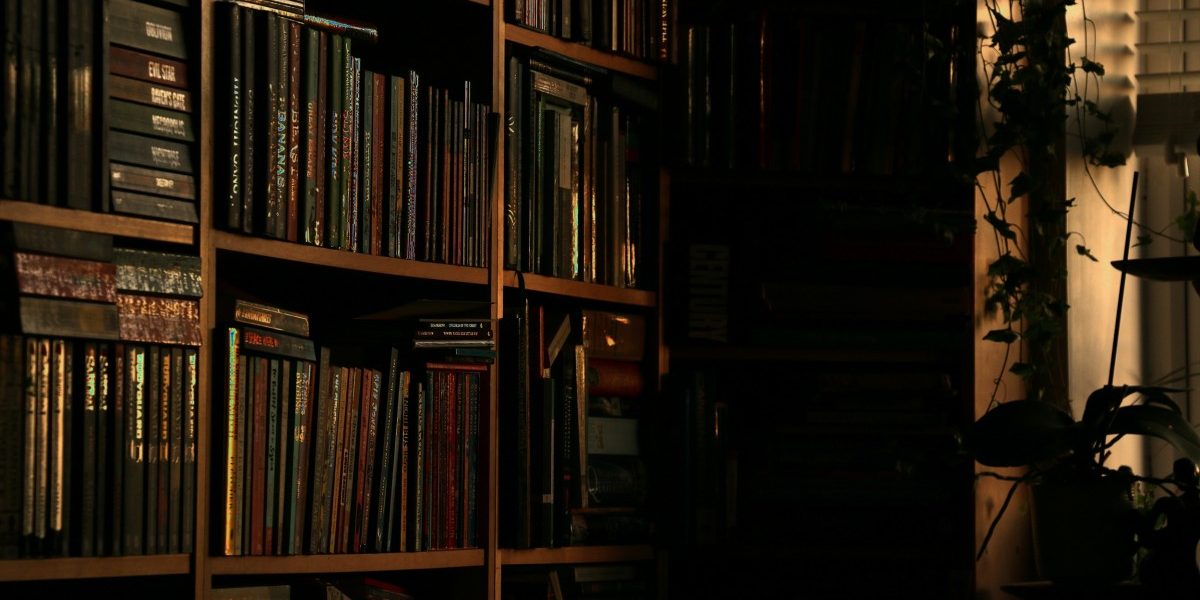 “Excuse me, sir,” I asked, trying to get the attention of the staff member at the Maharashtra State Archives, a public archive located in the heart of South Bombay. I had just spent several moments pacing up and down the dark corridors stacked with piles and piles of cloth-bound files and was making no headway in my search. I continued despite the silence in response, “Could you please direct me to the section with the Times of India newspapers from the 1930s onwards?” I waited in anticipation. 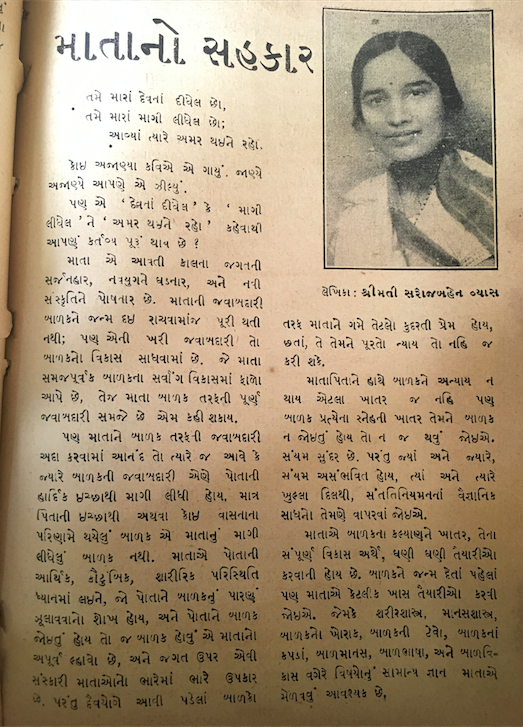 An essay titled Mata-no Sahkar (Mother’s Guidance) in the popular Gujarati
journal Guna Sundari (Nov 1936). The piece has an older woman sharing advice, in a
conversational manner to presumably younger readers. This piece gently suggests the use of scientific contraceptives where necessary, and stresses the importance for
mothers to take care of themselves, first and foremost. Photo: Forbes Gujarati Sabha, Mumbai

“Tumi kaun?” he finally responded, peering from behind a shelf. This meant, “Who are you?” in Marathi. Switching quickly from English to Marathi, I introduced myself as a PhD student with McGill University working on the history of birth control in India. I passed on the list of documents I was hoping to find at the archives. To my great dismay, this was not to be. I was informed that many of the documents I requested were in very poor condition, some even crumbling upon contact, which meant they could not be lifted off the shelves without turning to dust.

The kind staff member at the archives had been working there for over 15 years and had witnessed the colour of the archival documents change from white to yellow to nothingness; much like his beard, I thought. No digital copies were available for most of their vast collection, which translates to, what’s lost is lost. Dejected, I found my way to the Forbes Gujarati Sabha, a private archive in the Western suburbs of Bombay, not far from the international airport. The Sabha offered a wealth of material, particularly Gujarati collections of women’s domestic journals, and was superbly organised. Like the archive at the International Institute for Population Sciences, a research and educational organisation independent from and yet aligned with the Ministry of Health and Family Welfare, Government of India, it was a treat both in terms of the rich materials available and the systematic structure of the collections.

At the heart of it, what I was looking for in these archives were women’s own stories and experiences, as told by themselves.

Most historical scholarship on birth control, whether regarding India or elsewhere, has argued that birth control was imposed upon helpless, poor women. In a sense, this argument holds merit since birth control was advocated by elites to improve humankind and to counter the anxieties of overpopulation. It was not promoted for the wellbeing of women, let alone to promote reproductive choice and sexual freedom. 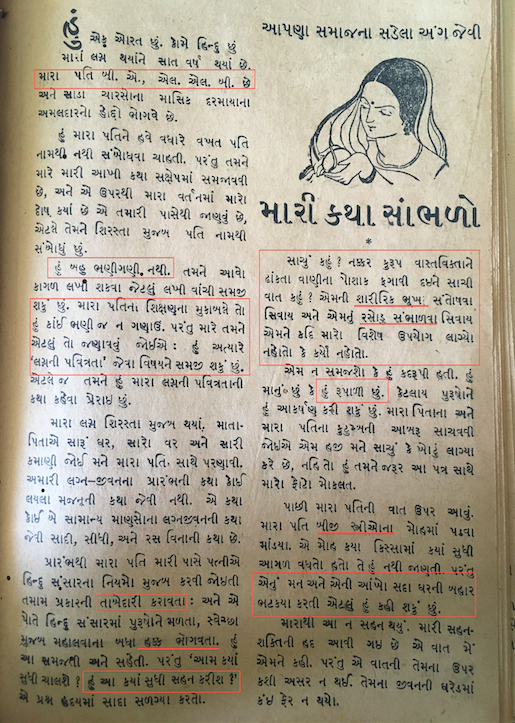 An essay titled Mari Katha Sambhado (Listen to My Story) in the journal Strijivan (Dec 1947). This personal essay describes mistreatment by her husband, sexual and mental, covertly making a powerful argument in support of the contentious
Hindu Code Bill. This law, not yet passed, would permit Hindu women to divorce their husbands on grounds of cruelty. Photo: Forbes Gujarati Sabha, Mumbai

However, I found this methodology and approach to history writing far from satisfactory. I was also alarmed to see that most historical scholarship on birth control showed little creativity in the use of archival material, relying primarily on records of western/international organisations, such as the World Health Organisation, the Ford Foundation, the Rockefeller Foundation, the United Nation, and so on. There was a thundering silence in the representation of women’s accounts of their own stories and experiences, as well as sources in vernacular languages such as those that women would use to communicate regarding matters of the intimate.

Through these archives, I was able to discover that women in India actively engaged with birth control, were receptive to new technologies, and were keen to limit or space their pregnancies. In other words, they understood the benefits of modern birth control and sought it out. This then, stood in contrast to historical scholarship that made the too simple argument that women from marginalised communities had birth control imposed upon them. Such a narrative was not only inaccurate, it also did disservice to women’s agency, will and intellect.

In another corner of the world and at an advanced stage in my PhD, I turned to the Ingenium Centre in Ottawa, an institute with federal funding and home to a massive collection of artefacts, trade literature, rare books, and more. Here, as every archive I have worked in, I entered expecting something and left surprised and with something else. The collections and archives at Ingenium, to my great joy, were excellently organised, and the materials were accessible digitally, a boon in these times. Admittedly, as an Indian researcher, I was both impressed and envious at the respect, funding and due attention given to research and archival materials by the Canadian government. However, and this is interesting especially in its contrast with local, small archives in Bombay and Gujarat, I found there were significant gaps in the collection at Ingenium. In a larger sense, there were limited medical technologies on reproductive and sexual health, and specifically, the collection was missing archives that reflected women, particularly indigenous, immigrant or women of colour’s experiences, in relation to health, fertility and reproduction. 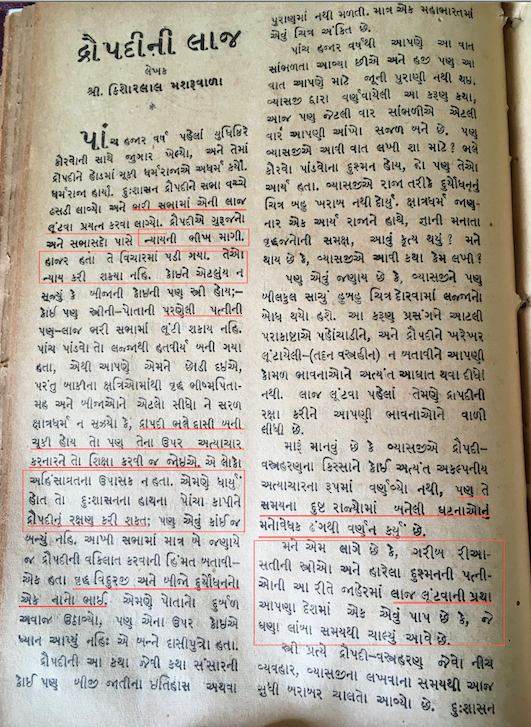 An essay titled Draupadi ni Laj (Draupadi’s Honour) in the journal Strijivan (Dec 1946). This was a fierce commentary on the lack of respect given to women, both in India’s mythical past and in contemporary society. The writer granted no leniency to the gods in the ancient Indian epic, the Mahabharata, and argued they were complicit in
the violence on Draupadi, by their silence. Photo: Forbes Gujarati Sabha, Mumbai

In an upcoming Ingenium Channel piece entitled A Tale of Two Nations, I mention that birth control was illegal and punishable in Canada until 1969, however diaphragms, pessaries, and condoms were available through physicians and as prophylactics at drugstores. The absence of these histories, but more so, the voices of women, particularly indigenous women who were the main target of birth control coercion (and more), points to a larger and troubling silence in how we record and remember our histories. Missing representation(s) in archives tends to reflect, or result in, a one-sided history, where authoritative voices speak over marginalised, vernacular or indigenous voices, or worse, speak for them.

As a historian, my experience in the archives has been fascinating, confusing and illuminating, often all together. However, I try to remember that archives themselves are political spaces, with the power to represent, or not, and to remember, or not. Indeed, whether in terms of protecting invaluable archives for future generations, to treat and respect them as cherished national heritage, or in terms of being mindful of voices that may represent different facets of the same story, it is time we better interrogate the state of our archives and collections. In recording and retelling stories of the past, it is important for us to scrutinise our claims of accessibility, lest we leave someone behind.

Urvi Desai is a doctoral candidate with the department of history, McGill University, and McGill–Ingenium Fellow. Her research discusses the history of birth control markets in Bombay. Her archival work includes sources in Gujarati, Hindi and Marathi.

This article was originally published on the Ingenium Channel and is republished here with permission.